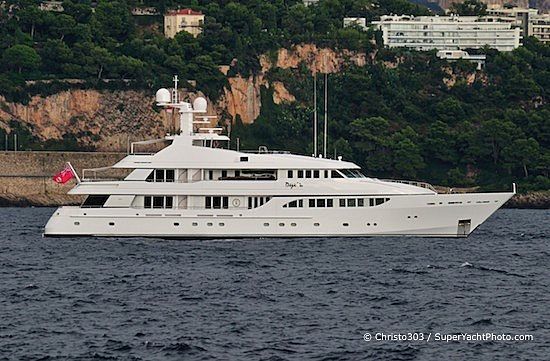 Built by Royal Van Lent in 2000, Déjà Vu has undergone several extensive refits since. She was launched as Blue Moon, for a repeat client of Feadship. In fact, that client went on to build another large Feadship, also called Blue Moon, a 60 metre yacht that was launched in 2005. Déjà Vu has a full beam owner's Stateroom, and four guest Staterooms that can be opened to form two VIP staterooms down below. A feature Feadship repeated in several other yachts as well, such as the 39 metre GO. Déjà Vu is powered by twin 1500 HP Caterpillar diesels, and she is said to be amongst the quietest Feadship around.

UPDATE: The photographer of this photo just informed us, that the name of the yacht on the name plate is not spelled Déjà Vu, but Dèjá Vu, as can be seen in this photo. Her website however spells it Déjà Vu. Please let us know if you know the official spelling of her name!