Following yesterday's publication of the most definitive statistics on the 2014 superyacht new-construction market, we can today bring you an overview of the deliveries of 2014. 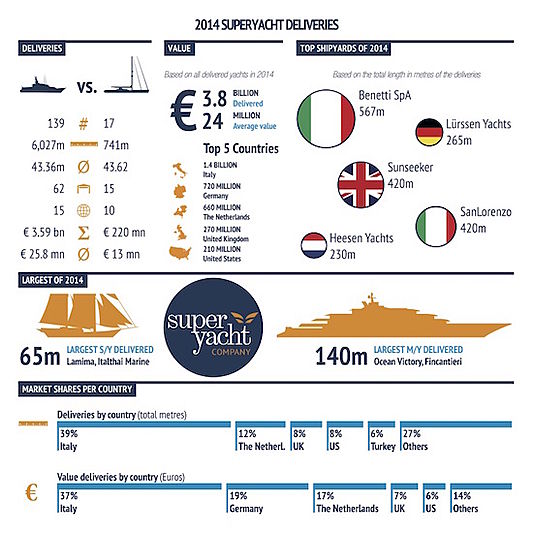 In 2014 shipyards worldwide delivered 156 superyachts over 30 metres, with a length totalling 6,769 metres. Compared to the 179 superyachts delivered in 2012, this is a decrease of more than 12%, and compared to the 159 deliveries in 2013 this is a decrease of 2%. This drop in deliveries is a direct result of the fact that nearly all of the yachts delivered in 2014 were sold during the financial crisis.

These 139 motor yachts had a total length of 6,027 metres, with sailing yachts totalling 741 metres. The average size of a motor yacht remained nearly the same as in 2013 at 43.36 metres. Interestingly the average length of a sailing yacht has grown again in 2014 by 2.08 metres to 43.62 metres. In 2013 the average length of a sailing yacht had already grown by 2.50 metres to 41.54 metres, compared to 39.04 metres in 2012. With a number of very large sailing yachts under construction such as the 106 metre Oceanco Solar project and the 147 metre White Pearl, this figure is set to rise over the next few years.