After a very successful ‘awards’ year in 2010 Bill Dixon has got 2011 off to a flying start by being named ‘Yacht Designer of the Year’ at the Asian Marine and Boating Awards 2011. Dixon, who has worked with companies in Asia for nearly thirty years, has now won prestigious awards two years running from a continent which is rapidly developing its leisure boat industry. 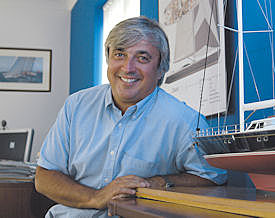 He was one of the very first European exhibitors at the Shanghai Boat Show, having already developed very close ties with builders in Taiwan, and is now working with several fast growing Chinese builders who have been quick to appreciate, not only his understanding of their local markets but also the experience that he can bring to them of markets worldwide – Dixon being probably the only yacht designer who could claim to have yachts in build on five continents at the same time, as he did in 2008.

Set up to be truly independent of any possible influence from, ‘friends or customers’ the Asian Marine and Boating Awards judging co-ordinator Alistair Skinner, who is a member of the Yachting Journalists Association, made it very clear that he was determined, right from the start, that the panel would be strictly ‘neutral’ to ensure that the, ‘winners are indeed winners, rather than just recipients of gifts’.

Bill Dixon comments, “I am delighted that the work my team and I have put into Asia for so many years is being recognised. Working as we do with companies in China, Taiwan and South Korea we have been able to develop a very strong awareness of how our clients work and in return, we provide them with high quality European design which has strong local, as well as worldwide appeal."