Auckland is set to benefit from more marine industry jobs and growth in regional GDP following a decision on the funding of a commercial development to service superyachts. The luxury vessels have become an increasingly familiar sight on Auckland’s waterfront in recent years with more owners recognising the level of expertise within the local industry and easy access to a world class marine supplies cluster in Wynyard Quarter. 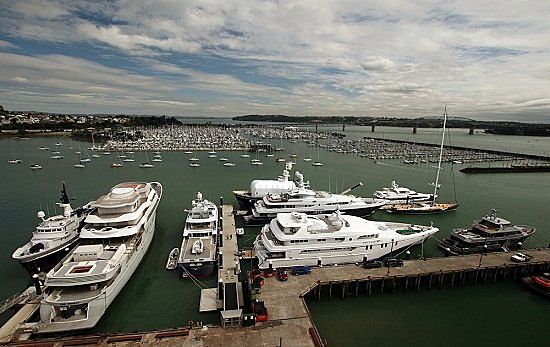 Marine industry figures show the refit and servicing of superyachts is worth millions of dollars each year, in addition to significant economic benefits from visitor spend by owners, crews and captains. To further capitalise on sector growth and to allow Auckland (and New Zealand) to take a leading role in the competitive international marine industry, council controlled organisation Waterfront Auckland will now progress plans for a new development to complement the recent building of six new berths Silo Marina, on the Westhaven side of the Wynyard Quarter.

The Council’s Strategy and Finance committee yesterday confirmed Waterfront Auckland would be able to fund the project as a commercial initiative, funded through Waterfront Auckland debt, with no direct impact on the ratepayer. Waterfront Auckland Chief Executive John Dalzell is delighted with the decision that the development of the facility proceed: “It was a matter of us not letting the opportunity go by, and whilst we won’t have final confirmation of the councils backing until next month, it is a major step that has been made and I’m glad that the majority of councillors have seen the potential from this important economic development project.”

Thanks to some lateral thinking and ongoing work with the marine industry, Waterfront Auckland put forward an alternative approach to the original $15m superyacht refit facility in response to the Mayor’s calls for fiscal prudence. “The revised option achieves an $8 million saving on the original proposal. Waterfront Auckland has succeeded getting approval for a proposal which will bring both jobs and millions of dollars in economic benefit to Auckland.”

Executive Director of the New Zealand Marine Industry association Peter Busfield says the decision is a great boost for the industry and will gain the country additional foreign exchange earnings: “This project has the ability to deliver over 200 new jobs including many apprenticeships for Auckland, and an ability for Auckland to maintain a foothold in the fast growing billion dollar global superyacht refit market.” Mr Dalzell says the proposed development will go a long way to meet current demand and with the ongoing support and assistance from key parties in the marine industry we look forward to growing existing facilities for the benefit of all Aucklanders.