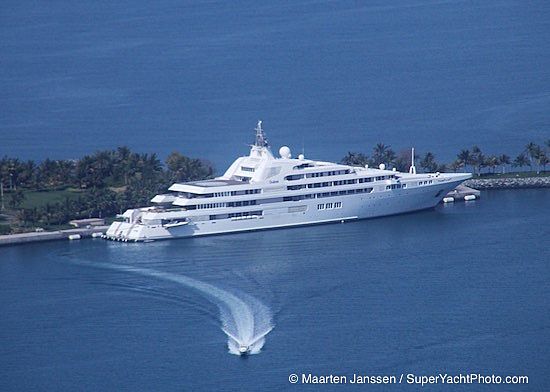 Pictured here is the immense superyacht Dubai docked at Logos Island in the UAE. Though her hull was initially completed by the German shipyard Blohm + Voss, she was transported to the Platinum Yachts FZCO facilities located in Jebel Ali for completion in 2006, in the home country of her distinguished owner; the Vice President and Prime Minister of Dubai, Mohammed bin Rashid Al Maktoum, also referred to as Sheikh Mohammed. In this photo, she is docked at Logos Island, one of two identical artificial islands built in the shape a palm leaf, owned by the owner of Dubai.

Dubai is the third largest yacht in the world after the 162.50 metre Eclipse built by Blohm + Voss in 2010, as well as the 180 metre Azzam launched in 2013 by Lürssen Yachts. Designed by Andrew Winch with interiors designed by Platinum Yachts, Dubai boasts accommodation for up to 72 guests.