Renowned for their long range comfortable cruisers Vripack back in 2009 designed a New Generation Explorer with the elegance of a Super Yacht for a repeat customer. At the recent 2011 Monaco Yacht Show superyacht E&E made her grand debut in style. 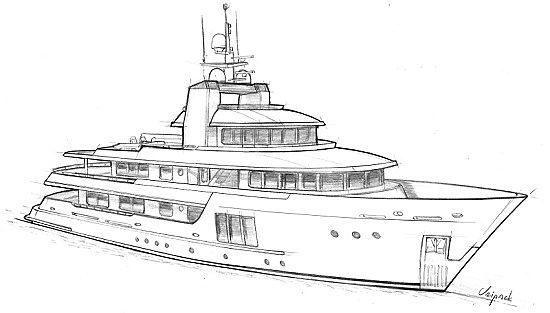 As with their first yacht, the Vripack Explorer Jasmin built by RMK, the Owner and his wife allowed Vripack to come up with a unique design.” Says Bart Bouwhuis of Vripack. “Evolving on the main volumes of their Explorer and keeping the good flow of the layout, we managed to style her with a softer and more mature look. This also meant we sketched well over hundred critical details for the yard to make sure the finesse we envisioned her to have would remain also during construction and fairing. We did not make it easy for them but ultimately they did an outstanding job.”

Besides designing her exterior expressions Vripack also made sure the sea going comfort, which both the Family and the huge amount of charter guests so often raved about, was kept if not improved.

“The hull is based on our library of 50 years Research and Development. We performed multiple in house CFD studies and our Naval Architects executed their most extensive still water and sea keeping model test ever. All and all we spent nearly two weeks in the basin testing alone. Analyzing, optimizing and testing again until we were satisfied. This resulted for example in the yacht being built on weight target by nearly the kilo, which in turn has her burn a mere 65 liters per hour at 11,8 knots which was measured during her maiden voyage. Proving our statement that conventional yachts can go Green if designed with the proper attention.”

“With 2011 marking Vripack’s 50th anniversary, it is clear we are very proud that we have not one but two returning clients taking delivery of their yachts. In the spring the 141ft Research Vessel Yacht Axantha II was launched by JFA and now we have the 138ft E&E in the water by Cizgi and both Families are truly happy with their different yet similar ships. May they create countless memories with them.” Bart concludes.