Hoek Design in the Netherlands has announced the launch of Firefly the first in an exciting new series of F-class one designs. Combining the spirit of the J-class with the performance of a maxi racer, the design brief for these race classics called for the smallest sized vessel that could beat a J on the water in both light and heavy winds. Firefly will make her racing debut at the Superyacht Cup in Palma (June 23-26) and negotiations are under way for two sister vessels.

Firefly is the result of a long research project that saw the Hoek Design office develop fifteen different yachts with varying length, beam and displacement, sail area and draft. The vision of the owner of the first yacht was also instrumental in the development process. Once the optimum size for competing against the Js was established, Firefly was then constructed to the highest quality standards in the Netherlands. The hull was built by Bloemsma Aluminiumbouw, a yard that has already built four J-class hulls, and Firefly was completed by Claasen Shipyards, most recently responsible for the J-class yacht Lionheart. 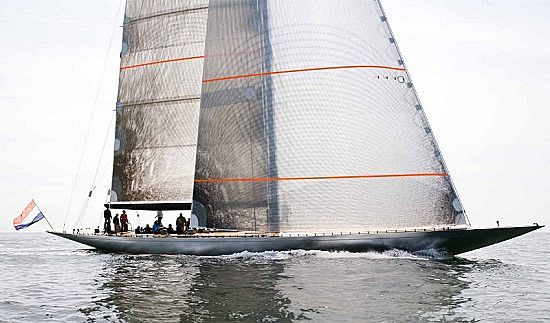 With long overhangs and sleek lines, Firefly’s exterior styling is similar to Js such as Svea. A sweeping sheer with a flush deck and moderate deck camber echoes the look of yachts that were developed in the early 1930s. Below the waterline, however, she is more comparable to a modern maxi racer with a high aspect ratio, T-style fin keel with a lead bulb. The combination of a 5.2 m draft with a 3D-tonne lead bulb and carbon high aspect ratio spade rudder is exceptionally powerful. Nonetheless, Firefly can be effortlessly steered with two fingers. 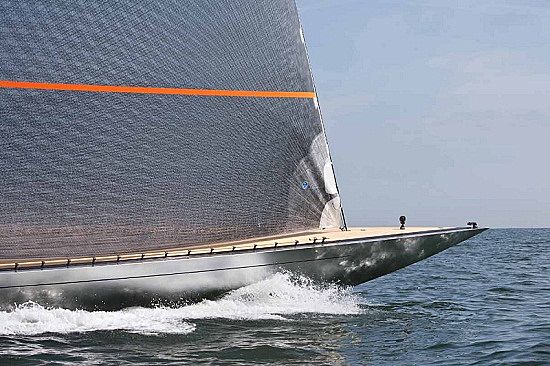 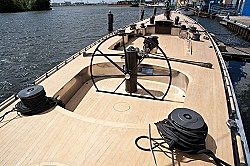 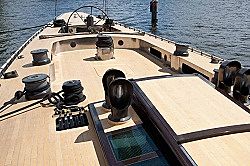 The deck layout is comparable to a modern maxi with a large open cockpit and separate cockpit for the helmsman. On deck and in the interior, the yacht is developed as a pure sailing machine with a minimalist interior with pipe cots forward of the mast, a stall shower and separate toilet, locker space for all the crew, a small galley and a navigation table. The inside of the hull is coated with a new insulation paint system called Mascoat T and DB. The hull is lined with red cedar planks spaced one inch apart with red cedar floors, aluminium striping and composite grating. 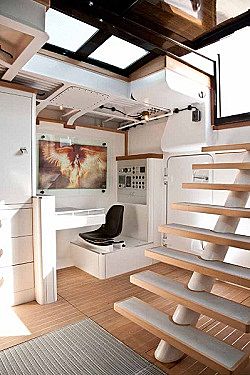 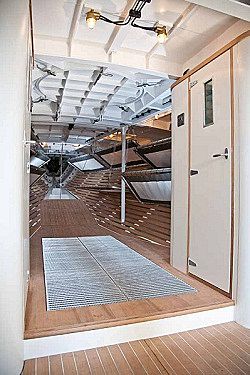 Firefly’s technical systems are very advanced. The main engine is a Steyr 6-cylinder driving a folding propeller and IFG generator, while a 4-cylinder Steyr engine drives an IFG generator and hydraulic pump. All sailing systems are hydraulic with Harken winches and Lewmar deck gear. A water ballast system is built for long distance races, with five tonnes of water that can be transferred from one side to the other within two minutes.

Firefly is fitted with a fixed keel, although class rules also allow for yachts with a lifting keel. Designs are made in such a way that the stability and performance are identical with either option. An F-class Association has been set up and a dedicated website is being created for the class.