Amsterdam based Orka Fine Arts represents the work of superyacht artist Tom Liesegang. Commissioned to commemorate some of the world’s most luxurious private yachts, Liesegang brings a unique vision and skill to the industry. Oceanco presented his latest work as a gift to the captain of the spectacular 86 meter 7Seas. 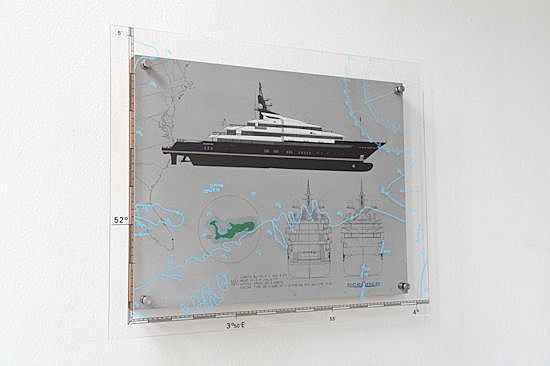 For 7Seas, Liesegang rendered obsolete, traditional framing methods. Instead, he chose to “float” an over-sized protective sheet of 6 ml. plexiglas 2 centimeters above the work. The coordinates and soundings depicting the entrance to the Hook of Holland were printed onto the glass creating a third dimension. 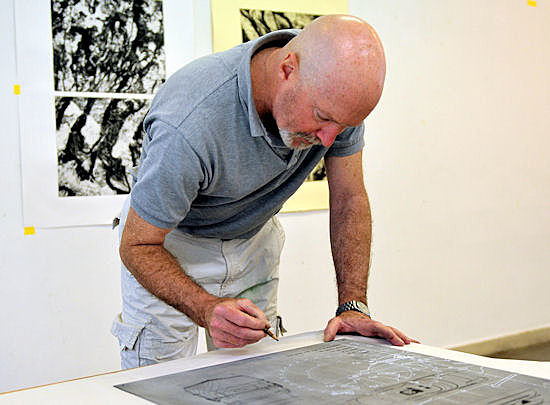 By working closely with builders and discussing details about a particular yacht: such as seeing her line drawings, viewing her color scheme, what waters she is intended for, Liesegang begins to formulate an aesthetic concept which best represents that particular yard and boat. Ideas are then rendered in several computer drawings for final evaluation. His aim, in short, is to depict yachts through their fundamental design elements that reflect an industry that is technology driven and in so doing, to create "an intimate portrait of a vessel." The result is a unique, interpretive work of art combining Liesegang’s dynamic eye for composition, painting skills and hand-print making techniques.

Liesegang combines these techniques and applies them to not-so-traditional materials: such as aluminum and glass. “The yard provides me with the very same aluminum from which that particular yacht is built,” he says, “this way the piece becomes an integral part of the building process, a post-production statement, plus, it makes it very personal for the Owner.” Liesegang begins by transforming the aluminum with a series of acid baths. Once he achieves the desired effect, what was once cold, shiny steel becomes a warm and inviting ‘canvas’. The frame that supports the work is the same wood used in the yacht’s interior or decking. In the case of 7Seas, the support is 5 centimeter thick solid teak.

“For 7Seas, we wanted to create a visual narrative and link a discourse for the viewer: where she was built, where she is flagged, her vitals, what materials she was constructed from as well as her Owner’s nationality.”

The industry has taken notice and is responding. Liesegang is now in discussions with multiple yards in Italy, Turkey, Germany, and the Netherlands. He says, “We’re all touched by gifts that are hand crafted. We cherish them over something store bought or was purchased from a phone call.

I’m looking forward to explore new possibilities such as creating a site-specific work for an interior. The results could be stunning.”

Raised on the northeast coast of the United States, Liesegang has been drawn to the sea since childhood, taking inspiration from artists such as Winslow Homer and J.M.W.Turner. Maritime art, regarded by many as uninterestingly tradition bound and long associated with the 19th century Romantic Movement, is now being dynamically brought into the 21st. For an artist who was inspired by an artistic genre of the past, it seems fitting that he is poised to take it into the future.