Kingship Marine Limited had successfully caught the world’s attention by introducing the world’s first hybrid green boat under 50m – Green Voyager, at the Monaco Boat Show two years ago. Two years later, on 19 April 2011, her keel laying ceremony was held on Kingship’s yard in Zhongshan. Green Voyager is a new design concept which combines luxurious comfort and environmental responsibility. It is for the owner who seeks a low impact superyacht to cruise the globe; one who wants to do so responsibly but doesn’t want to compromise on luxury and comfort. Mr. Horacio Bozzo, designer of Green Voyager, explained that Green Voyager, unlike other green boat, took on a 360 degree approach instead of providing solutions to only one or two environmental problems to reduce her environmental footprint. 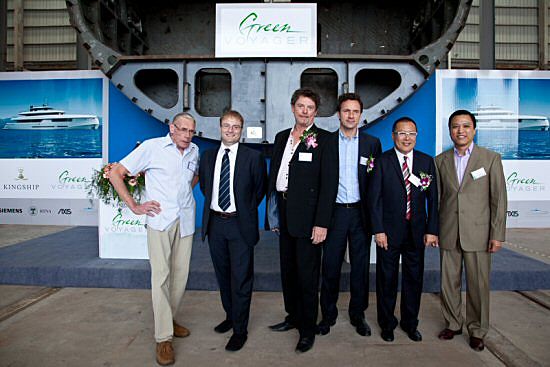 Horacio’s and Kingship’s effort was further recognised by the presence and speech of Mr. Mauro Boni, RINA’s Asia Pacific Yachting Line Manager and Mr. Tork Buckley, and Senior Consultant of Big Blue Consultancy. Mr. Boni said, “The construction of Green Voyager is a project that first in China shows to the world the commitment of a Chinese company and China towards environmental protection.”; while Mr. Buckley expressed his amazement of how Kingship’s Green Voyager project is showing that China can lead and set trends for the superyacht industry and hope that it brings about awareness among the superyacht community as a globally trend.

Kingship has once again created its own version of keel-laying ceremony. Mr. Roger Liang, Managing Director of Kingship, leading his fellow staff had carried out an incense burning ceremony, asking the gods to bless all Kinship’s staff to be safe throughout the construction. 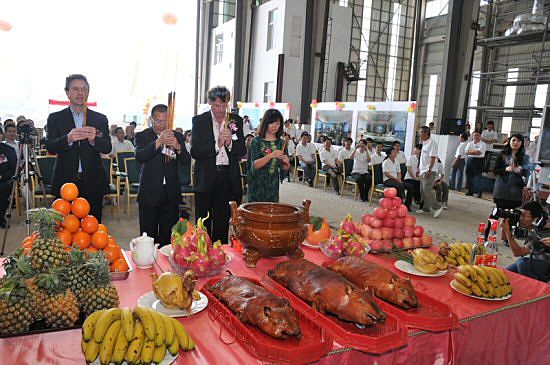 Kingship had prepared two new lions for their own version of keel laying (incorporated with lion dance). The history of lion dancing dates back to more than a thousand years ago and has always been an integral part of Chinese culture. The lion itself is regarded as a guardian creature to drive away evil spirits and to summon luck. The lions would dance and show different emotions. The lions usually perform the “Picking the Green” act, where the keel laying plate was tied together with, to usher an auspicious business. However, their mission this time was to bless Kingship’s technicians and workers a safe and peaceful construction. After the lions had successfully picked the green together with the keel laying plate, they passed it to the Kingship’s welder who then welded the plate onto Green Voyager and completed the ceremony. 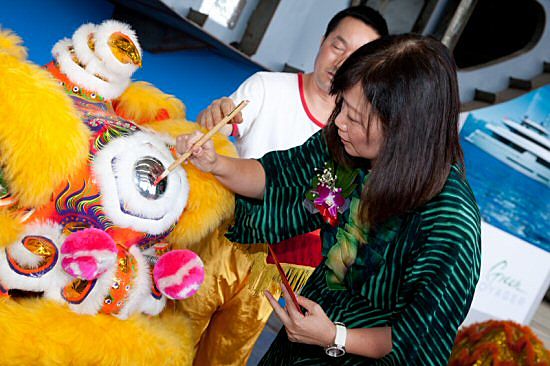 Green Voyager, is a 44 metre superyacht that combines luxury and environmental responsibility. She is the first superyacht in the world below 50 meters to have a truly hybrid propulsion. The vertical plumb bow is not just matter of style. The hull shape is an advanced displacement type, where the underwater main parameters and geometry have been studied and tank tested to achieve exceptional performances. This hull geometry reduces the wave-making resistance and its particular bow shape minimises slamming and favours a smooth passage through the waves, improving fuel efficiency and speed. On this single item, the yacht’s efficiency has been increased by 18 percent. She is also a great example of how an engineering need can be turned into a design feature. She is scheduled to be delivered in 2013.