Mike Slade’s Supermaxi ICAP Leopard has returned to competitive racing after a substantial refit, including a new super-light composite interior design, conceived by styling specialists, Design Unlimited, which has given the record breaking yacht a new lease of life. 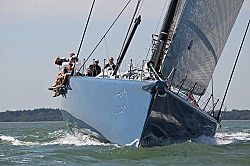 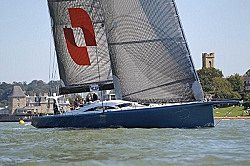 Taking line honours in the JP Morgan Round the Island Race, just 3 minutes shy of their own course record. Mike Slades’ Supermaxi showed that it has lost none of its devastating pace and last week, ICAP Leopard returned to regatta racing for The Special Edition Superyacht Cup in Cowes, attended by Her Majesty the Queen.

"We have been to many ‘bucket’ events around the world and I have really admired the superyachts that have attended those events.” Explained Mike Slade. “However, prior to our refit, Leopard didn’t qualify for Superyacht Cup events, so the regatta in Cowes was something of a new experience. The Royal Yacht Squadron is a magnificent place to host a regatta and being able to stay in comfort on board, moored up right outside The Castle was a pleasure that I have been missing for some time.” 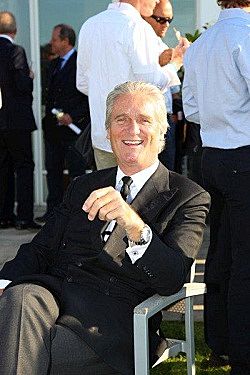 Of the eleven magnificent yachts entered for the regatta, Charles Dunstone brand new Wally 100, Hamilton was matched with ICAP Leopard in the performance class. However, The Superyacht Cup has a staggered start, according to the speed of the yachts. ICAP Leopard was determined to be the fastest yacht giving as much as 10 minutes to Hamilton but that in itself was not the only issue, to win each race, ICAP Leopard would need to pass some truly magnificent yachts such as the mighty schooners, the 204’ Athos and 180’ Adela.

The historic venue and heavenly weather provided a magnificent setting for the three-day regatta featuring a dazzling array of some of the world’s finest superyachts and a special visit by Her Majesty, Queen Elizabeth II drew a crowd of ten thousand people on The Esplanade outside The Royal Yacht Squadron.

In the performance class, ICAP Leopard and Hamilton enjoyed some outstanding racing. ICAP Leopard took the first race by some margin but Hamilton came back strongly to defend their one minute head start in the second race. The two hundred-foot Supermaxis swapped at least a dozen gybes, as they contested the lead but ICAP Leopard couldn’t pass Hamilton. The class winner was decided on the last race, as ICAP Leopard could not overhaul Hamilton’s 5-minute advantage, Charles Dunstone’s team won the encounter by a single point.

“Without a shadow of a doubt that was one of the most enjoyable regattas I have competed in. Leopard has undergone major changes including a full interior to qualify for Superyacht events and my first impression is that of an extraordinary environment with a variety of stunning yachts. It was a great pleasure to be up against Charles with his new yacht and I offer him and his crew my sincere congratulations. As far as Leopard is concerned, I think that after our substantial refit, we can be very happy that we are able to compete with a superb yacht such as Hamilton but I have come to understand that Superyacht events are about the enjoyment and the ambience rather than a win at all cost atmosphere - Brilliant fun and highly enjoyable.”

ICAP Leopard will next be on duty at Weymouth for the London 2012 Olympics sailing competitions and is fully sold out on corporate charter. ICAP Leopard then returns to the Solent for Aberdeen Asset Management Cowes Week.