The beautiful 73.7 metre motoryacht Ilona set sail again in May, after a very successful eight-month refit at Amels. While the yacht has been functioning perfectly since her launch in 2004, the owner wanted a major re-design to accommodate some new ideas into Ilona, as owner’s representative David McQueen explained: “The owner wanted to have a large swimming pool and a helipad large enough to take his Agusta 109 Grand New helicopter.” And so last August Ilona returned to the place of her birth, to Amels in the Netherlands for an extensive reworking of her interior and superstructure. 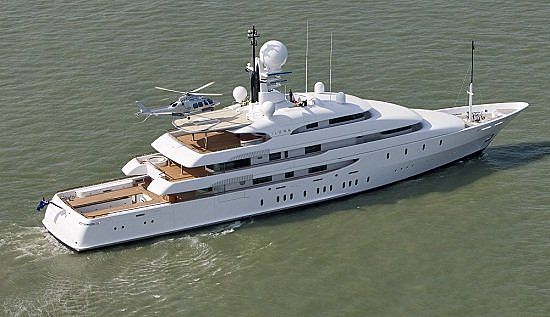 The below-deck helicopter hangar would be removed to make way for the swimming pool with a movable floor, enabling the pool to be replaced by additional deck space depending on the needs of the owner and guests. “With a variable depth floor with maximum depth of 1.5m, the 10m x 3m pool can be filled with 40,000 litres of sea water, which is then purified through a filtration system,” says McQueen. “The water can be heated to up to 6 degrees higher than the original sea temperature in just one hour.”

Amels managing director Rob Luijendijk comments: “Ilona’s refit was a big project that needed completing in a short time, but we finished it as promised. Having looked through the original construction plans, we did everything possible to minimise Ilona’s time at the yard. For example the deck extensions were pre-manufactured in advance. We enjoyed the engineering challenge of modifying the superstructure such that it could handle the maximum take-off weight of the helicopter, of 3,200kg. It is a great credit to everyone who worked on the refit that it all came together so smoothly.”

Aside from the engineering task, there was also the challenge of making these significant alterations without ruining Ilona’s sleek profile, drawn by Redman Whiteley Dixon. Justin Redman said: “Adding the additional superstructure to accommodate the helipad would have affected the lines of the yacht, so we extended the Owner’s deck and the bridge deck by 2 metres in order to bring the aesthetic appearance back into balance. We also used metallic grey paint to reduce the visual impact of the helideck, and the overall result is that the yacht, despite all the changes, looks every bit as streamlined and well-proportioned as before.”

The refit went ahead as planned, with all tasks completed and the yacht delivered on schedule for her relaunch on 16 May 2012. Captain Kenan Seginer oversaw the work at the Amels Yard and commented: “I really like Amels, they’re very friendly and great to work with. They’ve done a wonderful job with Ilona, and the after-sales team is excellent. The boss is very happy, and any work we need doing in the future, for sure we’ll be coming back to Amels again.”

Rob Luijendijk concluded: “It was wonderful to see Ilona back, and we appreciate the owner’s trust in Amels being the right yard with the right people to do the job. This was an enormously complex project, but we have the right people and facilities for complex projects like this. This was the 37th refit to have been carried out by the dedicated Amels Refit Department. With our largest dry dock capable of accommodating yachts up to 215m long, 30m wide and 46m high, we look forward to many more, large-scale projects here.”

With annual growth of 10% over the past four years, Amels is the largest superyacht builder in the Netherlands. Already 2012 has been a busy year, with three new-builds and two refits successfully delivered on time, and with another nine new construction projects underway.