Gerardo Díaz loves spending time with his family on his 30m Ferretti, MY Leuqar. Based in Spain's Balearic Island of Mallorca, they travel all over the Mediterranean Sea. But one of their favorite pastimes onboard, eating lunch while moored offshore, couldn't be fully enjoyed until they found a dependable means of at-anchor stabilization.

MY Leuqar already had a fin-based system for underway stabilization. But with the majority of the Díaz family's time spent at anchor, the fin system was not capable of stabilizing their yacht. Even when Captain Carlos Alonso could find a protected cove, the rock and roll of the boat would still be too much to appreciate the scenery. Díaz and Alonso felt there had to be a better solution. 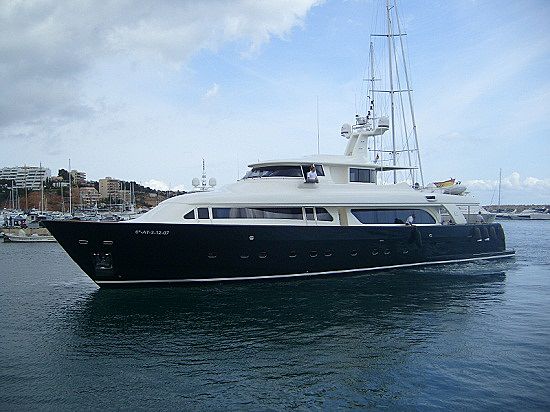 "We spend most of our time anchored, where boat roll is most troublesome. For the comfort of the owners and guests, we needed to add zero speed stabilizers, so we could better enjoy our days at sea," said Alonso.

The Díaz family first explored upgrading their fin system to add at-anchor stabilization. But after doing their research, they were disappointed with the expected performance, as well as the noise, added drag and power they felt came with this larger and complex system. Díaz and Alonso then looked at internal stabilization systems. They considered Ferretti's standard option, but felt the excessive weight, power consumption and space required for the recommended four gyro units was too much for MY Leuqar and her crew.

Instead, they chose to retrofit three Seakeeper M7000A Gyros. Generating a combined 21,000 Newton meter seconds of angular momentum, the three Seakeeper units combined only consume 4.5-9kW and add 1,365kg to the vessel.

"We selected Seakeeper because the power consumption and weight is very low in comparison with the [Mitsubishi] ARG stabilizers. The Seakeeper units also produce more angular momentum, which in turn provides better stabilization," said Alonso.

Another reason Díaz and Alonso chose Seakeeper was for its extensive global network of dealers and service/installation centers. This was imperative, considering how often and how far they travel with MY Leuqar. It provided peace of mind knowing that routine maintenance could be performed easily throughout the world.

With the yacht based in Mallorca, the retrofit installation went smoothly. MY Leuqar was already being restructured to accommodate new generators, so the Seakeeper gyros were installed in typically usable space – under the tender garage, tucked up against the engine room bulkhead. In the end, the three Seakeeper M7000A Gyros were able to provide an average of 70% resonant roll reduction for the 100' Ferretti MY Leuqar. Díaz and his family can now spend more days on the water, and enjoy lunch at anchor in areas they never could before, even near the beach.

"Zero-speed stabilization is one of the newest 'must-have' options being requested on yachts today," said Seakeeper VP of sales John Kermet. "To support this growing popularity, we have established a complete global sales and service network. This world-class support, combined with superior operating and anti-roll performance, is convincing more and more Ferretti yacht owners to choose Seakeeper."