While the very large superyachts attract a lot of attention, the “bread and butter” segment of the superyacht market over 30 metres is still the 30-to-40-metre segment, with a share of 63% of the operating fleet and 46% of the construction book. We take a look at the key statistics from this market segment. 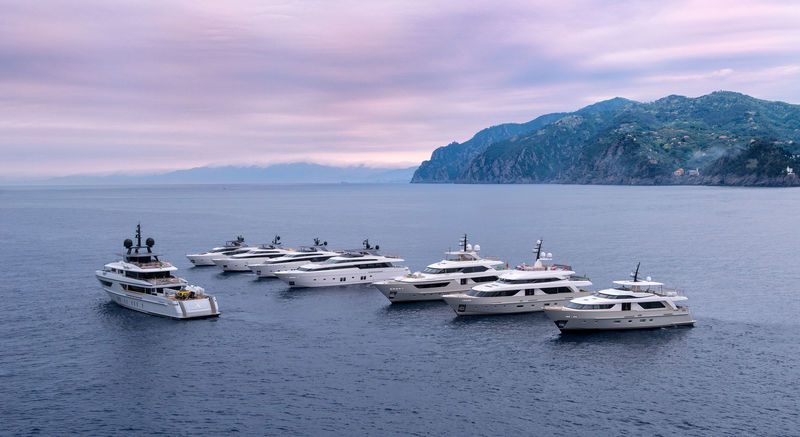 At the time of writing, there are over 5,060 operating superyachts over 30 metres. Over 3,200 of these have a length of between 30 and 40 metres, adding up to a share of the fleet of over 63%. In terms of gross tonnage (GT), the 30-40-metre fleet accounts for close to 28% of the operating fleet over 30 metres. The division between motor and sailing yachts in this fleet mirrors that of the entire superyacht fleet over 30 metres: 84% motor yachts and 16% sailing yachts. If we look at deliveries over the past ten years (2009-2018) we see that the 30-40-metre fleet has a share of deliveries of 55%, which is slightly under the share of 63% of the total fleet mentioned above. This means that the group of yachts over 40 metres is growing a bit faster than those between 30 and 40 metres, prompting key yacht builders in the 30-40-metre segment like the Ferretti Group, San Lorenzo and Sunseeker to expand their portfolios of yacht models beyond 40 metres. However, in absolute numbers, the 30-40-metre market has changed little, with between 68 and 86 new-build deliveries per year between 2014 and 2018. 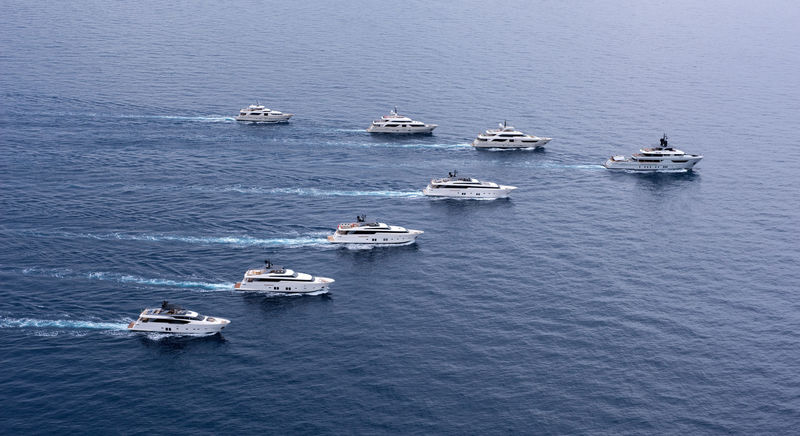 Photo: Guillaume PlissonWhere are these yachts being built?

Italian yards are by far the largest builders of superyachts in this size bracket, having delivered 1,153 of the 3,207 operating superyachts, a share of 36%. The Italian yards are followed at a distance by US yards, which have delivered 564 yachts, a share of 18%. The top five is completed by the United Kingdom, Turkey and the Netherlands. In the graph below we contrast the top five builders of existing yachts with the top five countries currently building yachts in this size range. 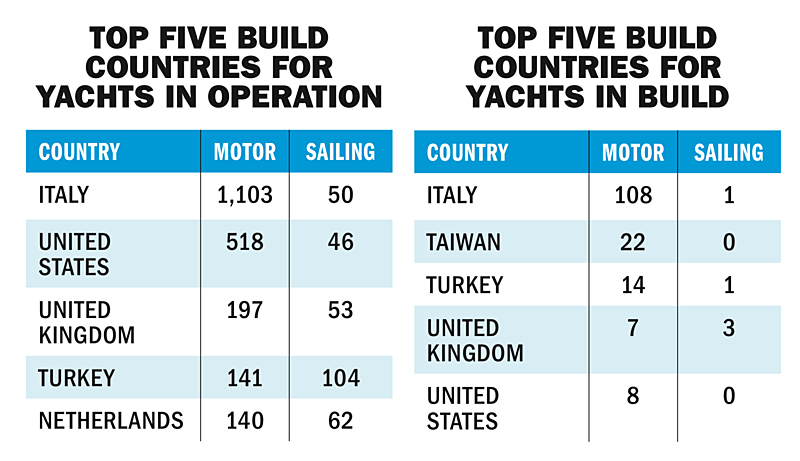 While Italy also occupies the top spot in terms of numbers of yachts in build, there are some changes in the rest of the top five when looking at yachts in build. Dutch builders have disappeared from this top five as they are mostly building yachts over 50 metres these days. Meanwhile, the US superyacht building industry is just starting to make its way back up the charts, with Westport and Hatteras introducing some new models in the 30-40-metre range. Taiwanese builders have become a force to reckon with in this segment and have been successfully expanding their customer base beyond their traditional US-based clientele.

Who are the top builders?

Zooming in to the individual shipyards which delivered yachts in the 30-40-metre segment between 2009 and early October 2019, we see that four yards in the Top 10 are Italian. As a single brand, Sanlorenzo is the largest builder over this period with 90 deliveries. The Azimut Benetti Group is the largest builder with 99 delivered yachts for the two brands combined, while Ferretti as a group built 93 yachts when we take the brand's Custom Line, Riva, Pershing and CRN all together (or 98 if we would also add Ferretti’s very recent acquisition, Wally, to the total). While Sanlorenzo had been in the top five in this segment for a number of years already, it started doing double-digit deliveries from 2015 onwards, which pushed it to the number one position as a single brand. The two builders with the most deliveries from Asia, Horizon Yachts and Ocean Alexander are in positions nine and 10 respectively.

Quite a few of the yards in the top 10 entered the 30-metre plus market relatively recently. Sunseeker, Custom Line and Gulf Craft made their first deliveries in this segment in 2001 and Ocean Alexander in 2008. Princess only made its first 30-metre plus delivery in 2011 and is also already firmly in the top 10.

New-build sales in the 30-40-metre segment showed a gradually rising trend, from 78 sales in 2014 to 113 in 2018. So far in 2019, new-build sales are behind on 2018, with 54 sales recorded in the first three quarters of the year. The new-build sales performance of 30-40-metre yachts is in line with that of the overall 30-metre plus segment. However, we expect to uncover more deals in the last few months of the year, meaning that the gap between 2019 and 2018’s sales performance should become smaller. An outcome for 2019 on the lower end of what we observed between 2014 and 2018 seems likely though.

Used sales in the segment hit 192 units in 2018, which is the best performance in recent years. Again, in 2019, sales are lagging behind at 117 units during the first three quarters of the year. This means it is likely that the record reached in 2018 will not be matched in 2019.

The construction book of yachts between 30 and 40 metres currently consists of 198 yachts, which will cover around two further years of deliveries. As the production time of yachts of this size is relatively short, the number of yachts under construction can also change quite quickly. We have seen some new entrants (or re-entries) into the 30-40-metre market in recent years, while other makers are re-vamping their line-up of models.

Examples of this include Overmarine, with their new Mangusta 104 (a fresh approach to the kind of boats that made the brand famous) and Benetti, with their B.YOND 37m, which targets the market for long-range displacement motor yachts with a relatively high volume, where Cantiere delle Marche has been garnering considerable success as of late. Meanwhile, Moonen, a traditional player in that particular niche, is back on track with a new owner and new models. So, while the immediate outlook in terms of orders is a bit unsure, there is plenty of development in the 30-40-metre market and exciting new models can be expected in the future.