Kyron Design has launched its 70m superyacht Nzuri, a concept that marks the first release by the new startup design studio, which has networks in both New York and The Bahamas. 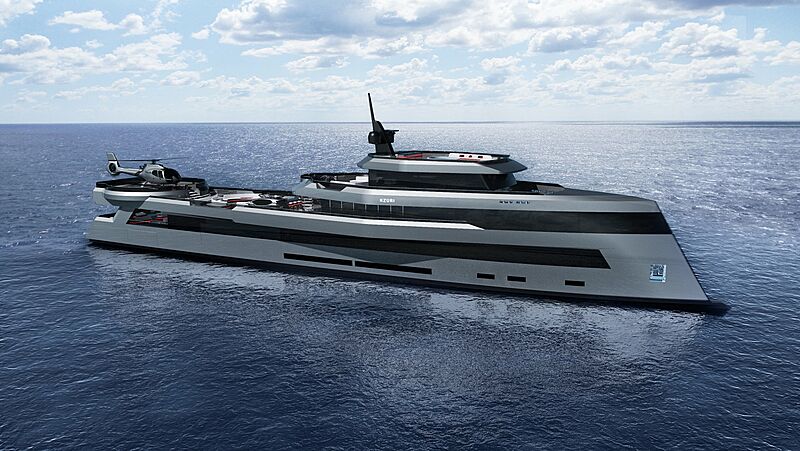 Photo: Kyron DesignThe explorer yacht will stretch to just over 70 metres in length and has been engineered and designed for the ideal explorer yacht owner’s experience. On the name of the yacht, the Kyron Designs team says: “The yacht’s name draws on the Swahili word ‘Nzuri’ which means beautiful, great and fine.” 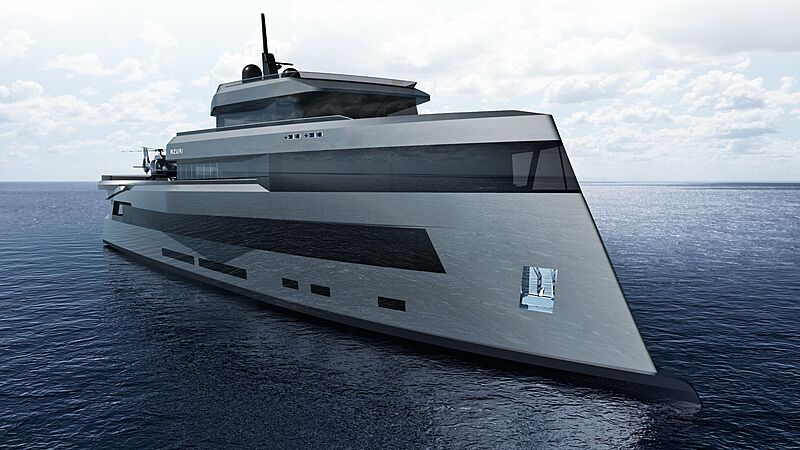 Photo: Kyron DesignThe design features a steel hull with a partial fibreglass superstructure. The rationale behind this is that her designers want Nzuri to be able to operate in all kinds of climates, from the polar regions to the Galápagos Islands. The design includes 10 cabins providing accommodation for 20 guests and eight cabins sleeping 28 crew plus the captain. 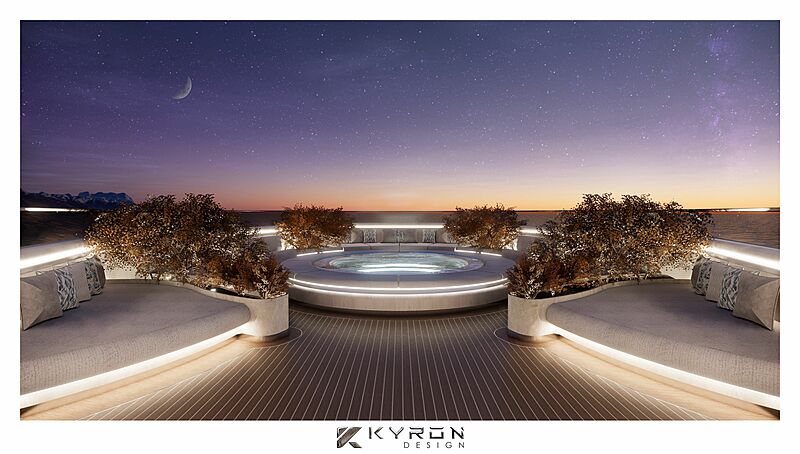 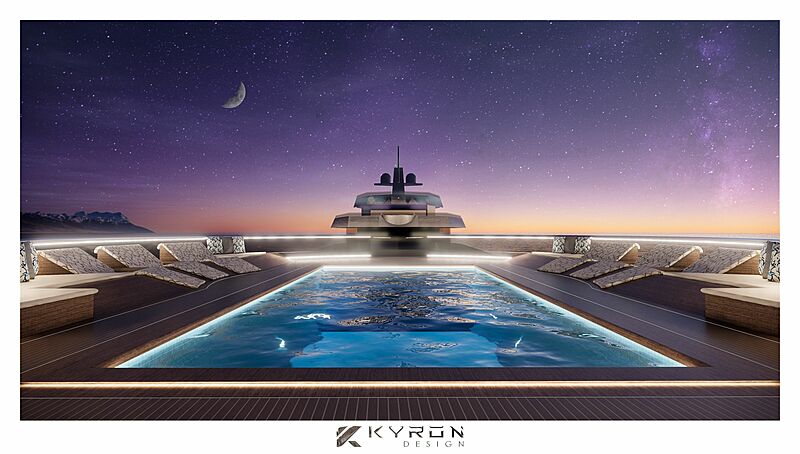 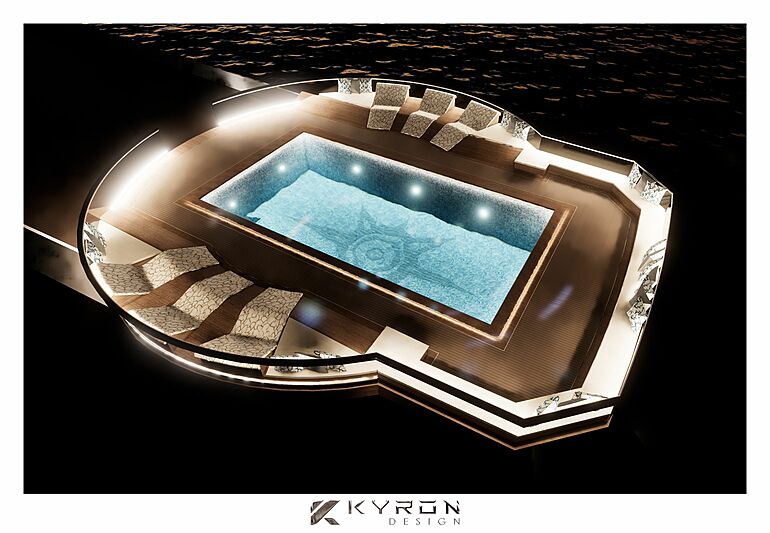 Photo: Kyron DesignThe intention of the interior brief was to create a comfortable environment that takes privacy into account, while also providing an exciting venue for the adventurous traveller. 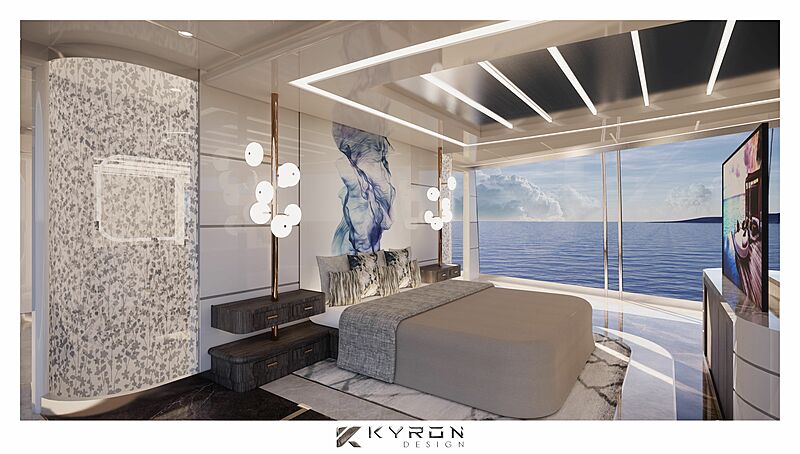 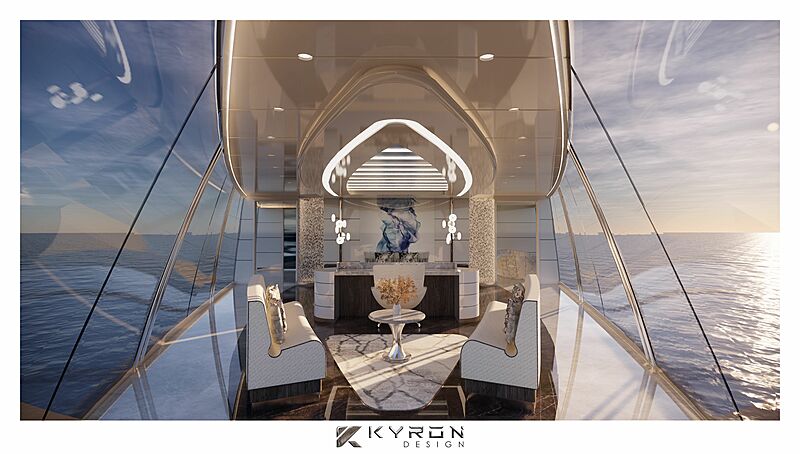 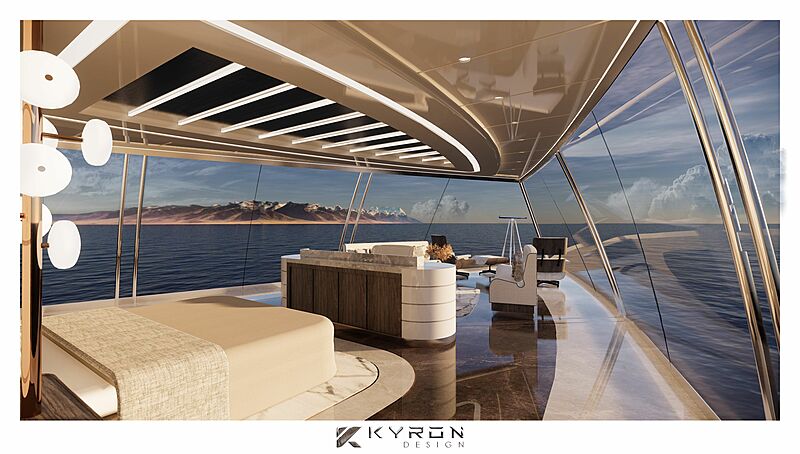 Photo: Kyron DesignThe overall design is futuristic and houses the latest window technology by Kinestral. Its Helio technology boasts that it is “the only electrochromic glass fast enough to respond to sky conditions in real-time.” There are also drones on board for use when travelling to the most remote or protected areas and a fully equipped exploration equipment room. 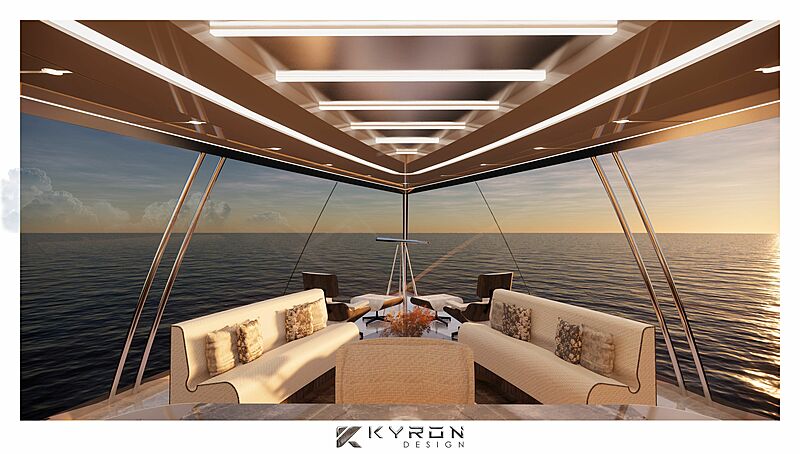 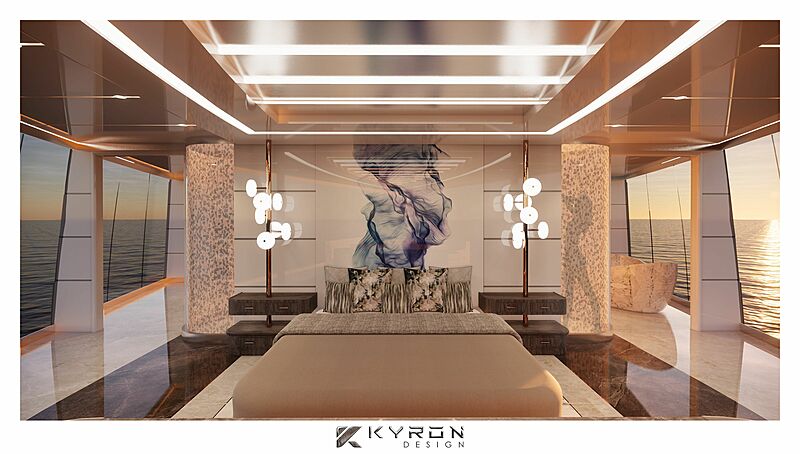 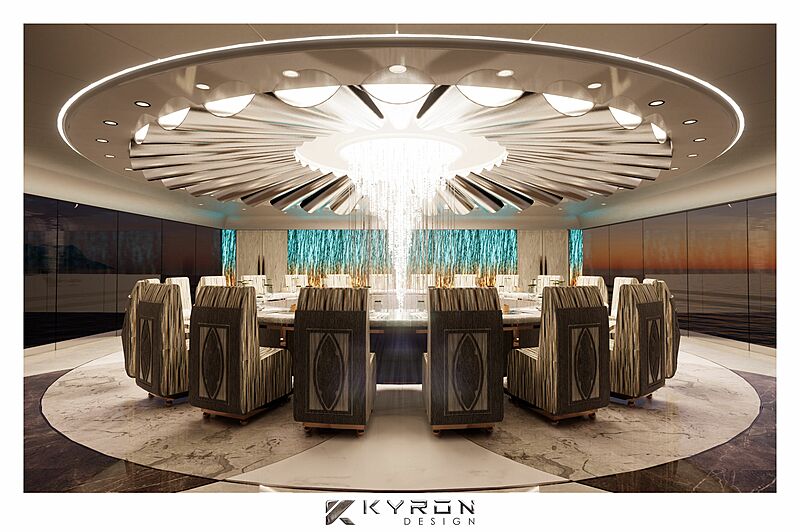 Photo: Kyron DesignThe main idea behind Nzuri's interiors is the natural flow of different spaces at different points of time. Designers interpreted this theme through a colour gradation that begins with lighter shades of grey on the upper decks, transforming into a darker grey and bluish hue as it draws closer to the water on the lower decks. 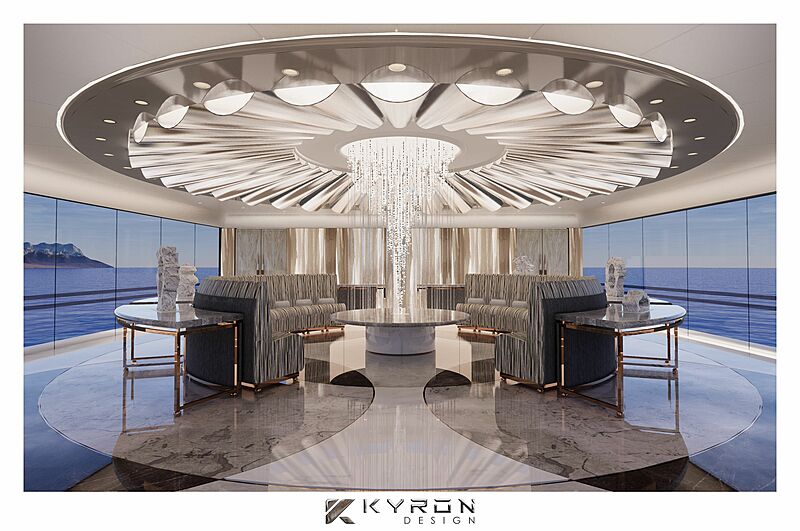 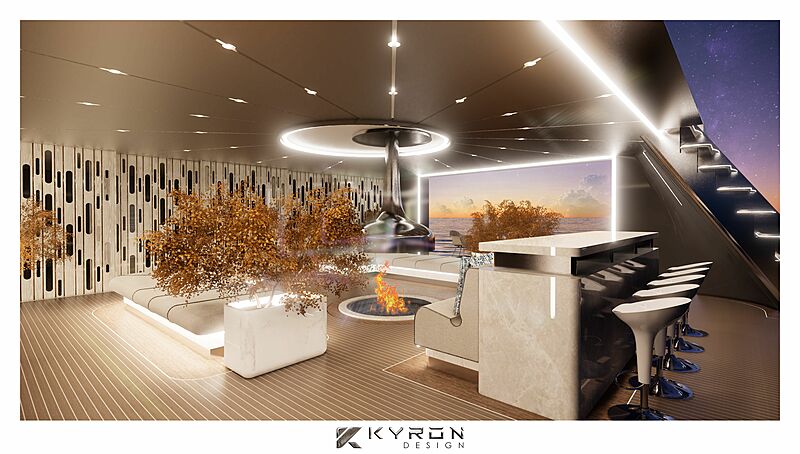 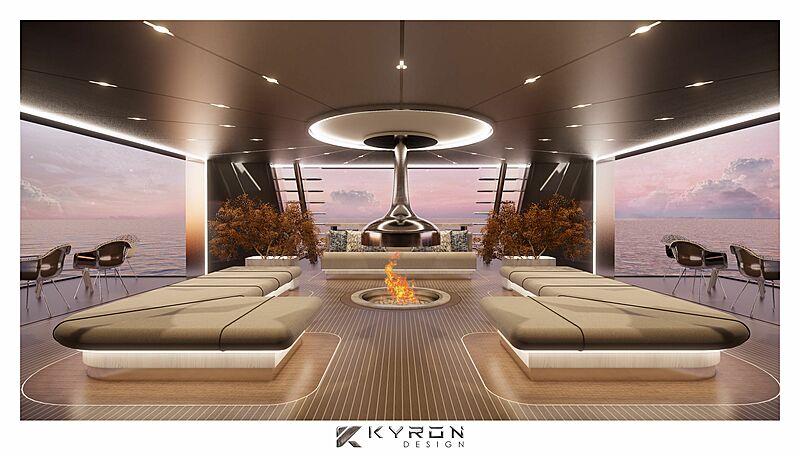 Photo: Kyron DesignSituated at the very tip of the bow section is the owner’s deck. Developed to capture maximum ocean views, designers describe it as the most memorable space on board Nzuri. Directly opposite the sleeping and seating areas inside the owner’s suite, ‘The Bath’ has been created as a space with its own sauna room, walk-in shower, separate water closet, double vanity, closet and storage compartments, and tub area. 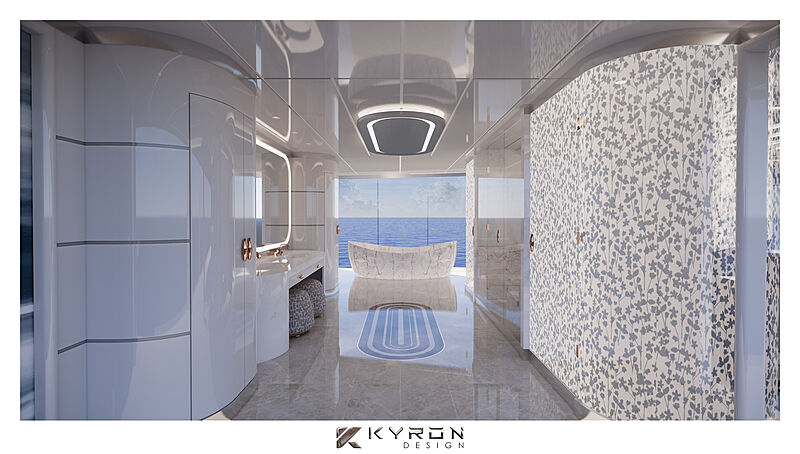 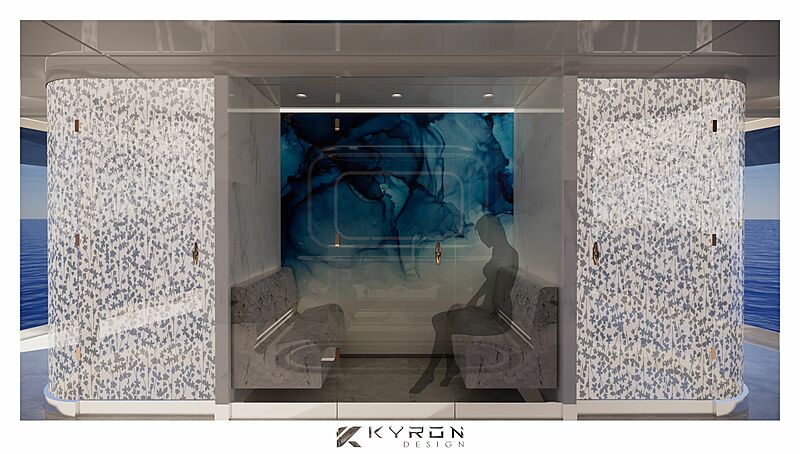 Photo: Kyron Design
The yacht’s swimming pool is situated on the owner’s deck, and also doubles up as a landing pad. With low seating and table-like surfaces, the perimeter of the pool has been designed to allow for comfortable social gatherings and the enjoyment of ocean views, while providing a functional and safe landing site. With similar perimeter seating as found in the pool deck, and with a Jacuzzi tub in the centre, the sun deck is another stand-out central space, acting as a rooftop for nighttime stargazing. 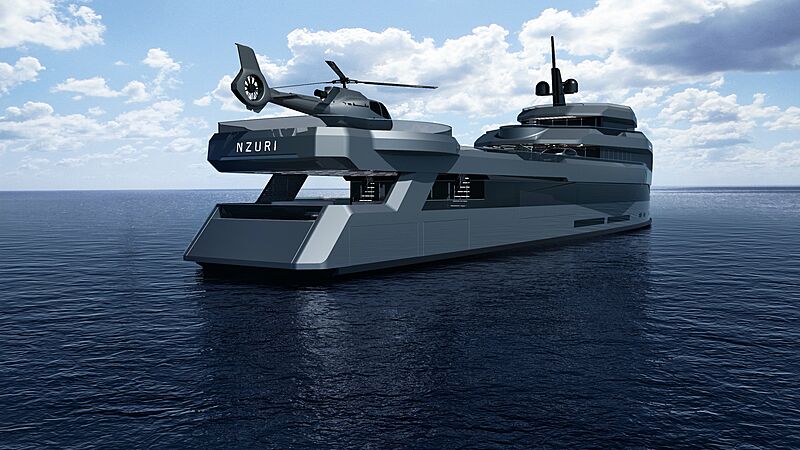 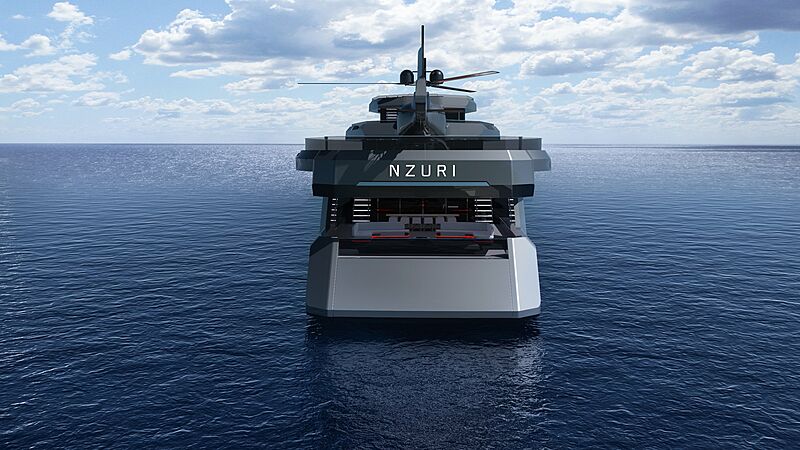 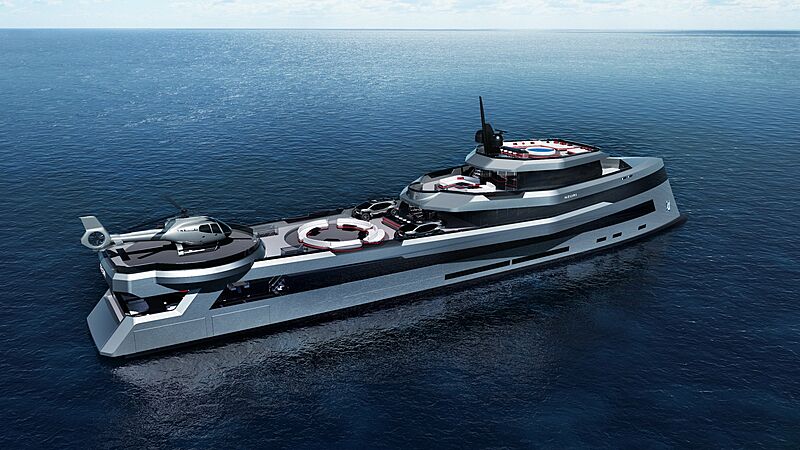 Photo: Kyron DesignThe design has a maximum speed of 22 knots, and it would boast a range of approximately 4,000 nautical miles.