Home > News > Superyacht of the Week: Stella di Mare, a star of the seas

At just under 40 metres overall and 430GT, Stella di Mare was among the smaller custom superyachts at the Monaco Yacht Show. But small can be beautiful and a tour on board soon revealed her true vocation as a steel and aluminium passagemaker designed to the exacting requirements of her experienced Italian owners. 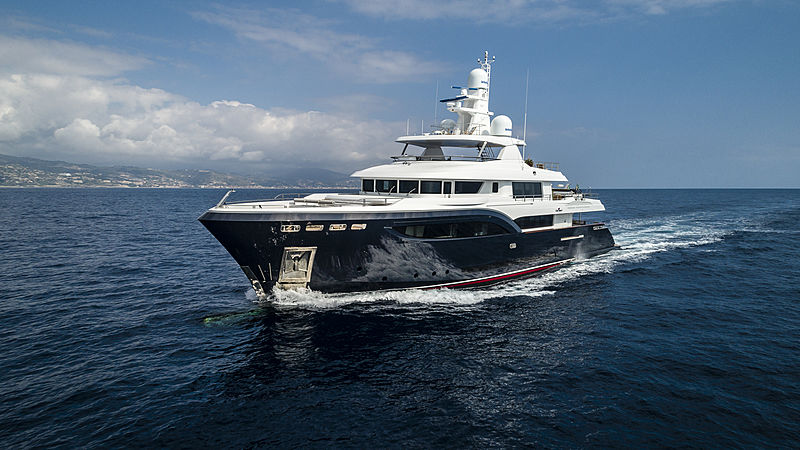 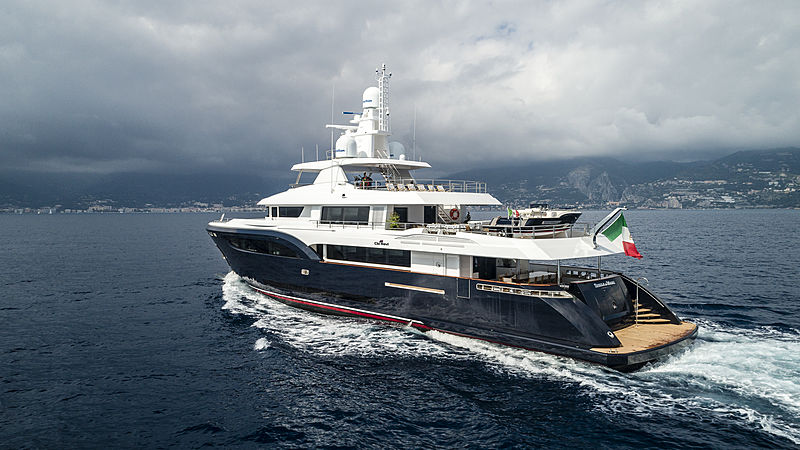 Photo: A&B Photo Design"Our intention was to create a connection between three family generations, starting from the first of 75 years old to the last of 7 years old," says the senior owner’s son. “We wanted a yacht of substance and real value, not just a fashion statement or status symbol.” 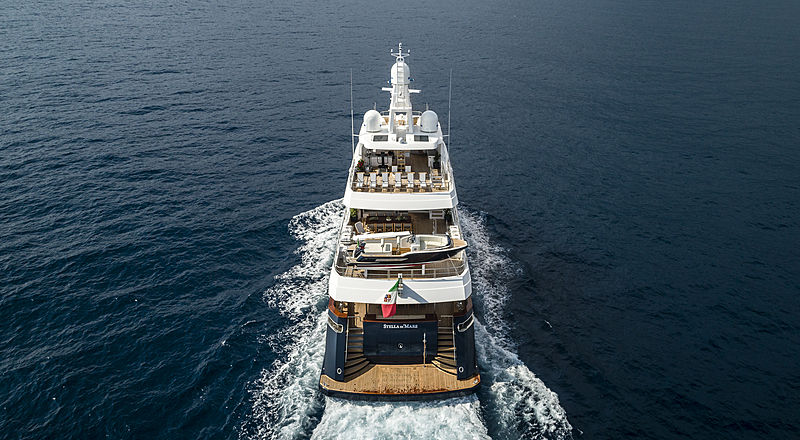 Photo: A&B Photo DesignThe family had previously owned a Darwin 96’ (Cantiere delle Marche), but as they spend up to four months on board each year they wanted more interior volume and storage space, not least because next year they are planning a trip to the Arctic Circle. This required a rugged yet comfortable, long-range explorer adapted to colder climates and able to be autonomous for weeks at a time. 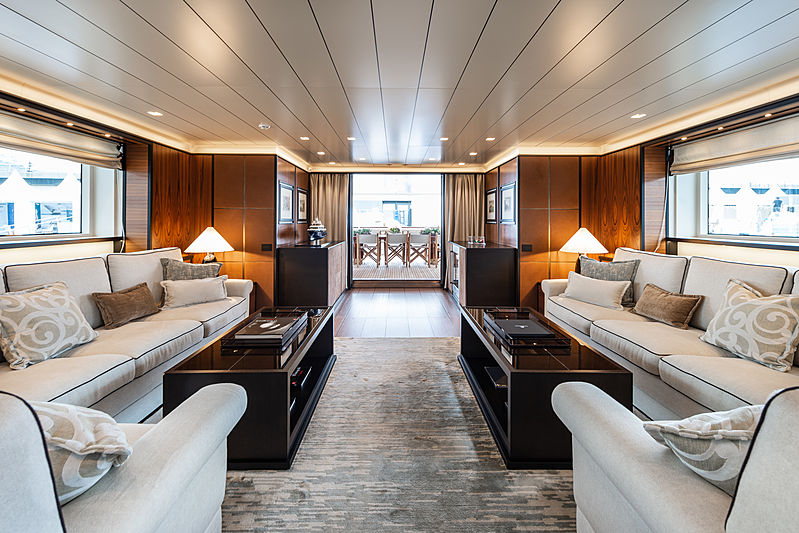 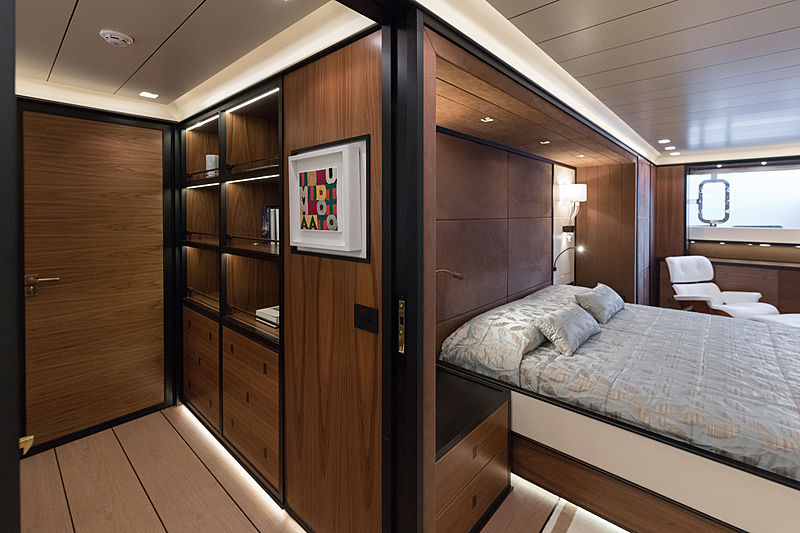 Photo: A&B Photo Design They approached HydroTec for the naval architecture and exterior design, and Fossati Design Bureau for the interior styling. Construction began at Mondomarine in Savona in early 2015, but when the shipyard ran into financial difficulties last year the project was relocated to CBI Navi in Viareggio for completion. 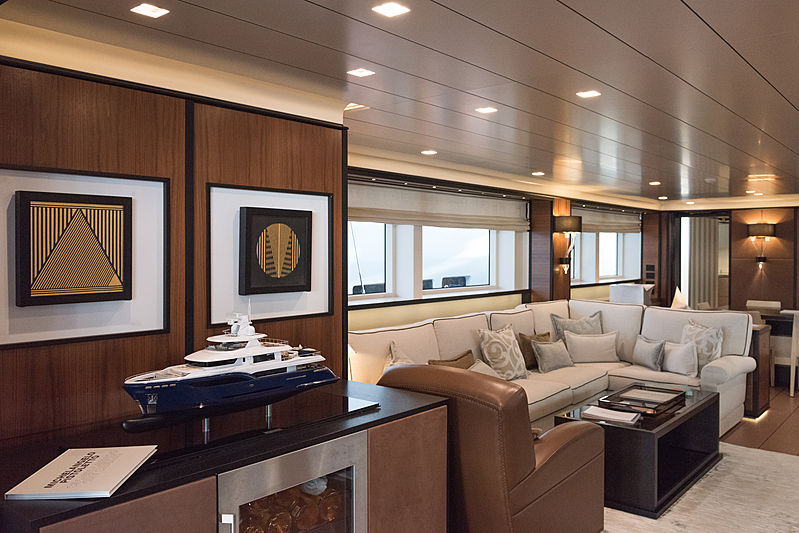 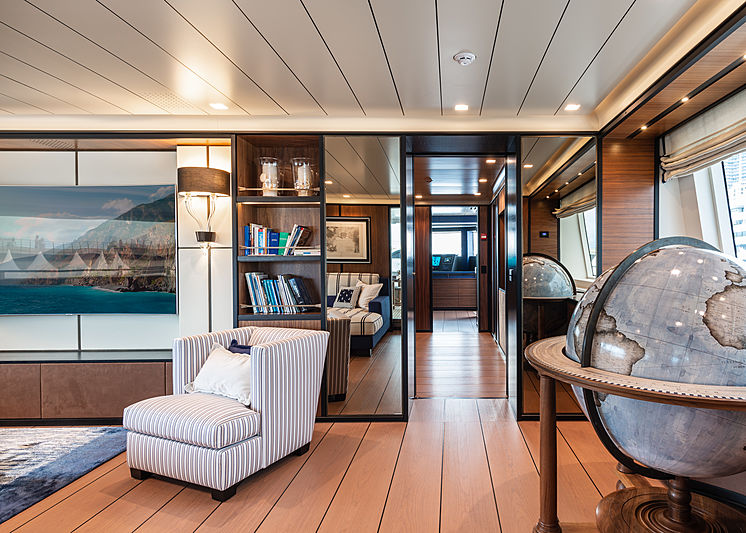 Photo: A&B Photo DesignLike her purposeful exterior styling, the interior design is classical and low-key yet also fresh and tastefully Italian. The principal wood is warm walnut, cut variously to expose the flame pattern and densely striped grain, and tinted cherry with wenge inserts for the flooring. Walnut tends to darken over time and this was taken into account when specifying the soft furnishings and accessories. 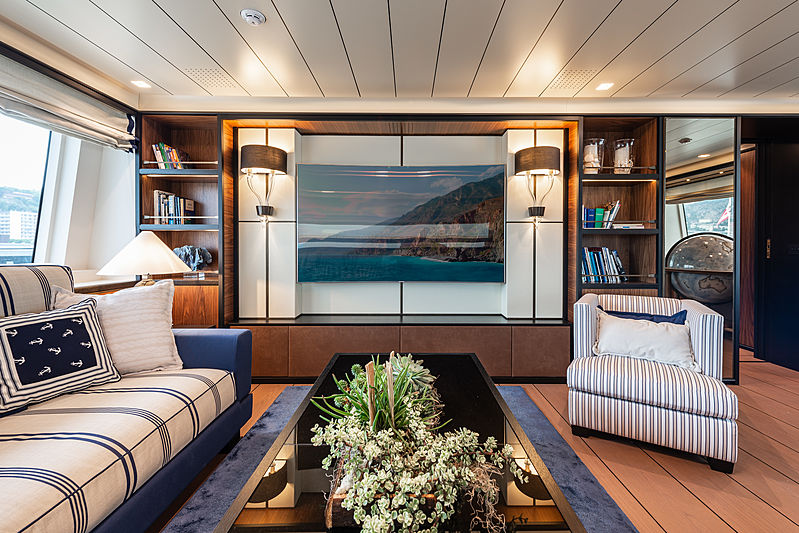 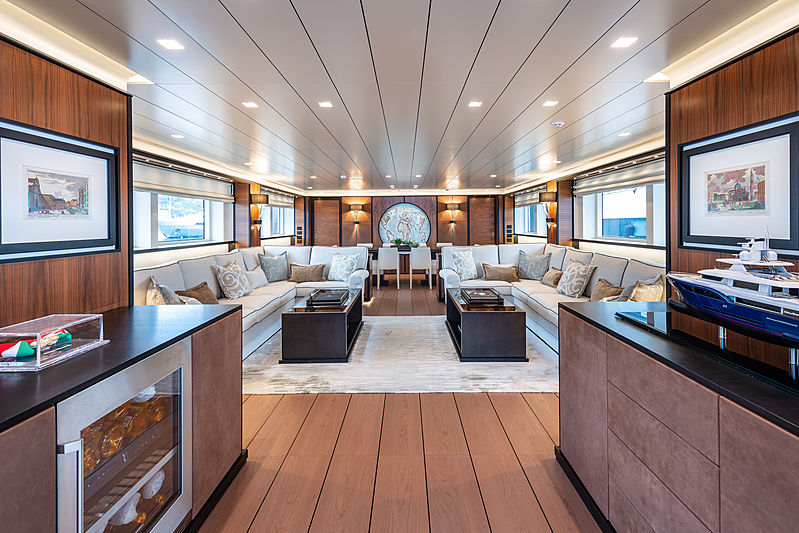 Photo: A&B Photo DesignAll the veneers are satin finished and the only metal detailing is a hint of brushed bronze to complement the dark-wood joinery and custom-tinted leather from Royal Leather. Instead of marble for the wet surfaces in the bathrooms and dayheads, the owners chose a laminated porcelain stoneware called Kerlite. 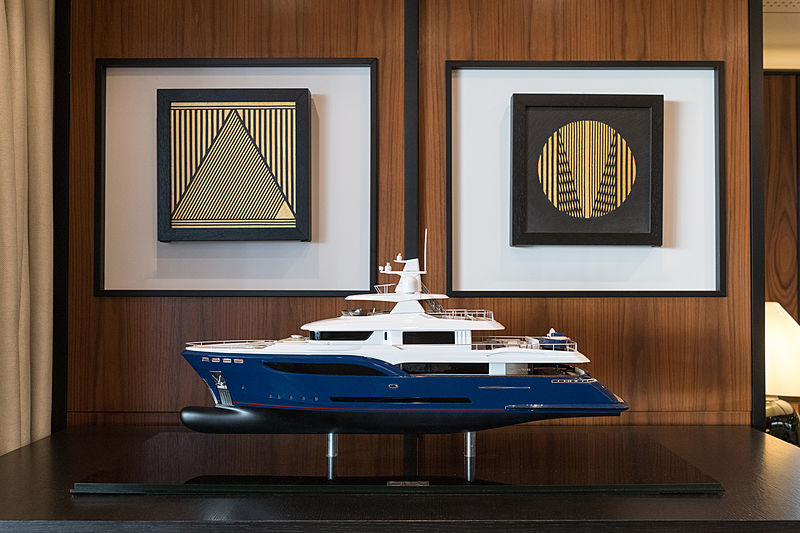 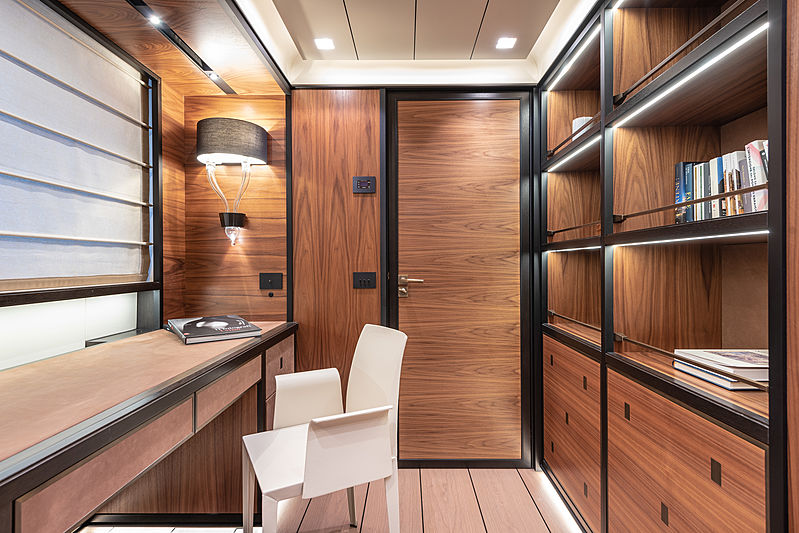 Photo: A&B Photo DesignAlthough certified for 12 passengers, Stella di Mare can carry 14 guests in a master suite on the forward main deck and four cabins on the lower deck. Pullman beds provide the extra berths in the twin cabins, including a children’s cabin with bunk beds that is playfully decorated with their favourite cartoon characters. 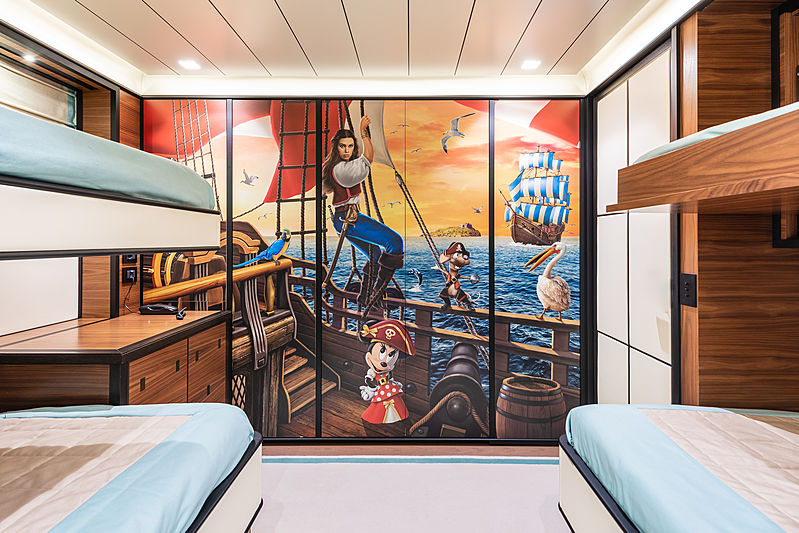 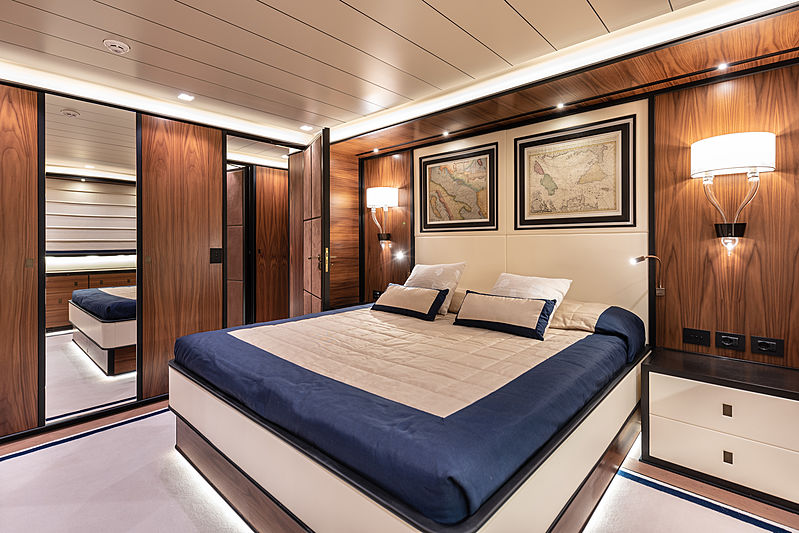 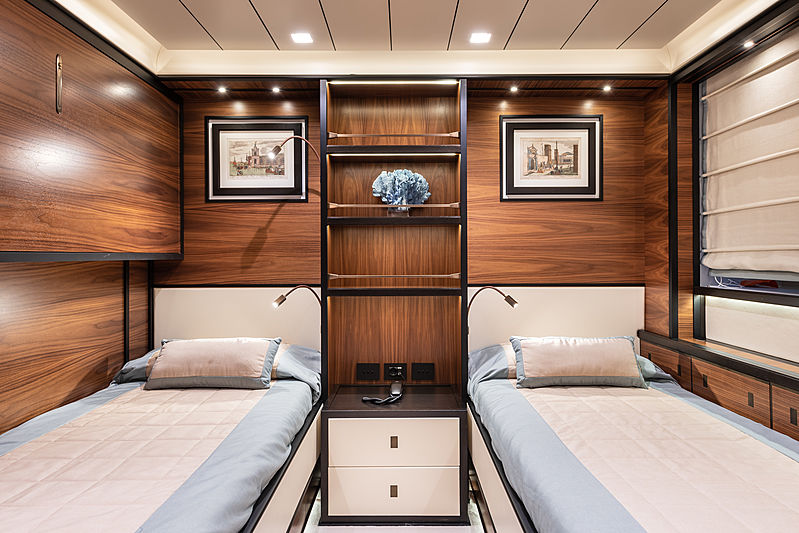 Photo: A&B Photo DesignThe bulkhead behind the dining table, custom designed by Umberto Fossati in wenge and brushed bronze, features an enormous circular map of the world by Bellerby & Co, artisan creators of hand-painted maps and globes. A large globe by the same London-based company is a standout feature in the sky lounge. Antique Venetian prints from the owners’ private collection appear elsewhere on the yacht. 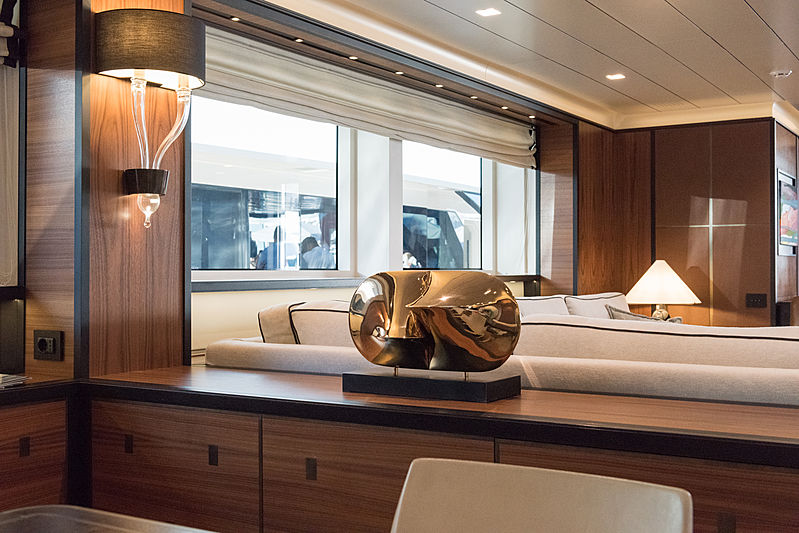 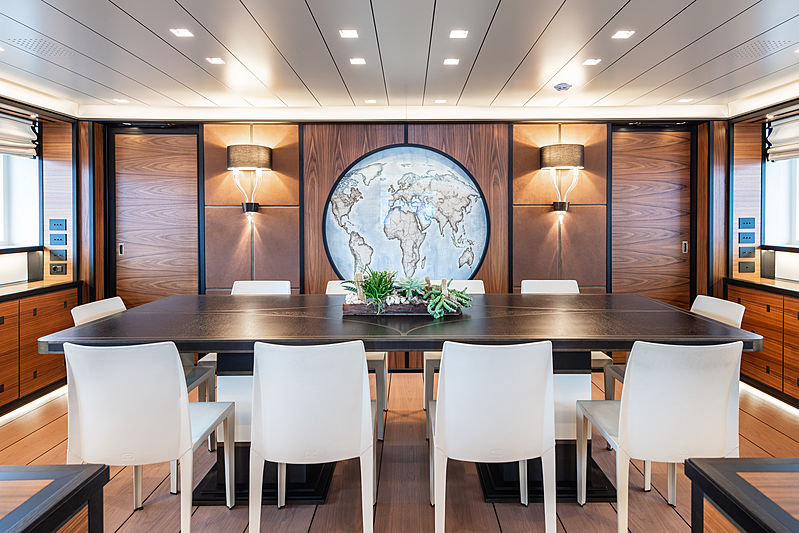 Photo: A&B Photo DesignUnusually, the owners favoured manual lighting controls instead of a domotic system (though the wiring and rack space for full automation has been designed into the boat). Refreshingly, there are also just three TVs on board: one in the owner’s suite, one in the crew mess, and a giant curved screen in the sky lounge that serves as a chill-out space/media room for all the family. 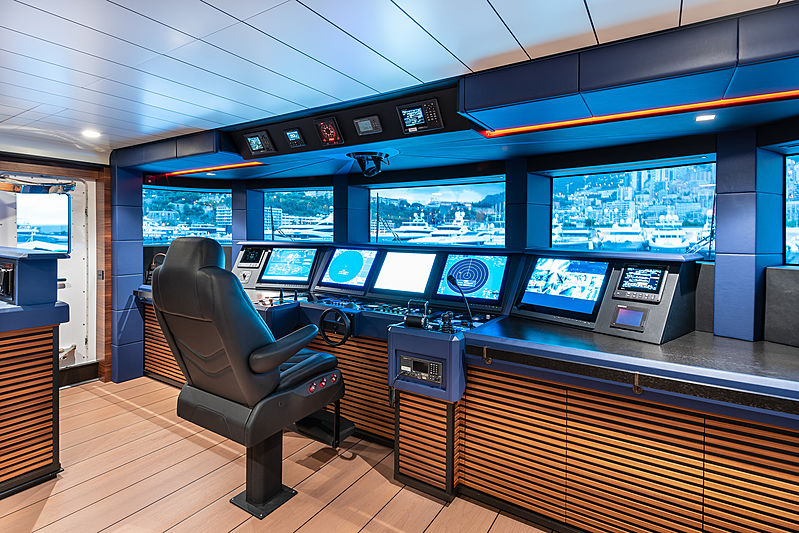 Photo: A&B Photo DesignThe practical wheelhouse, elegantly clad in marine blue leather, has a dedicated chart/radio corner and is surprisingly spacious for the size of yacht, as is the captain’s cabin fitted out to the same standard as the guest areas. 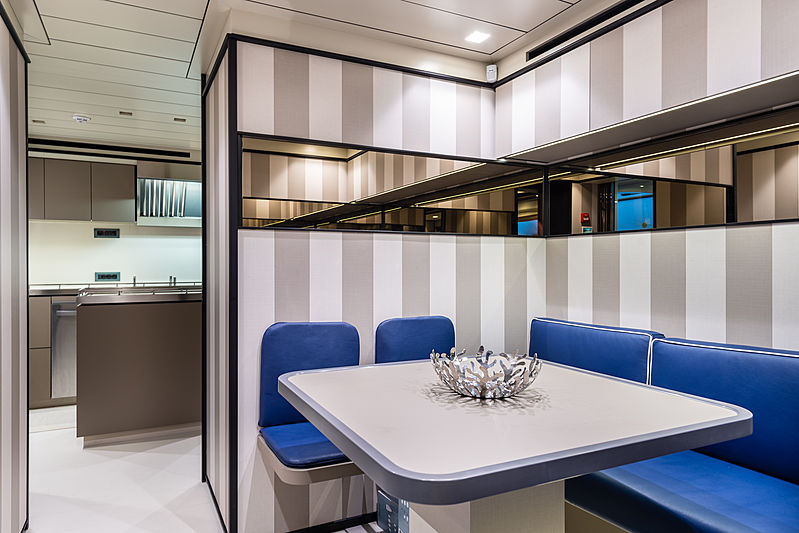 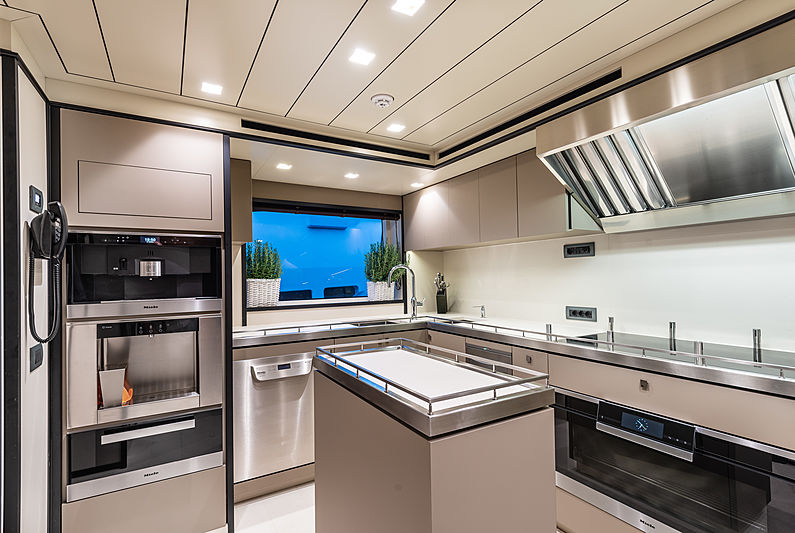 Photo: A&B Photo DesignThe galley is equipped with pro-spec equipment and features an adjoining breakfast corner that the owners use for informal meals. There are high-capacity fridge/freezers both in the galley itself and on the under-lower deck (another rarity on a 40-metre yacht), along with a refrigerated garbage store and wine racks for up to 800 bottles. 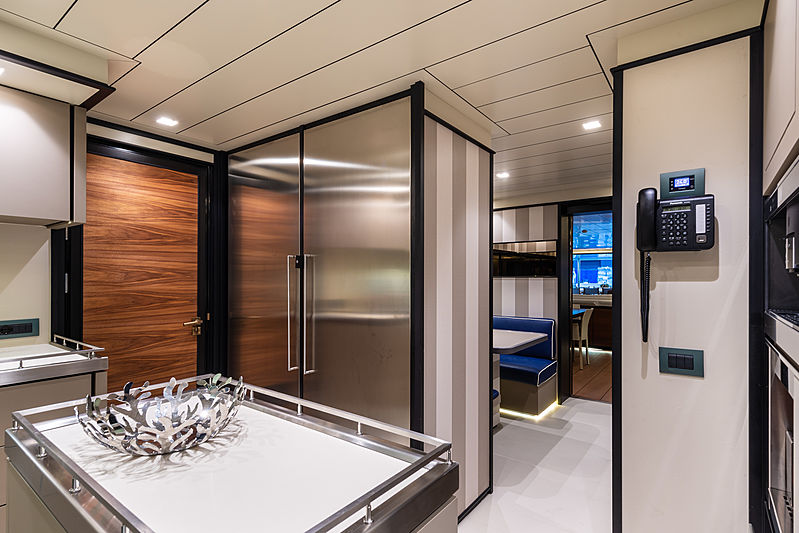 Photo: A&B Photo DesignJust as important for long-range cruising is the fully ventilated laundry on the forward lower deck, which is roomy enough to take an ironing board without occupying the crew corridor.

Shaded exterior dining is provided on all the deck levels, including the fly deck that has a well-equipped galley unit with BBQ behind the helm station. A couple of exercise machines are tucked under the radar roof and a skylight set into the deck illuminates the main stairwell below. 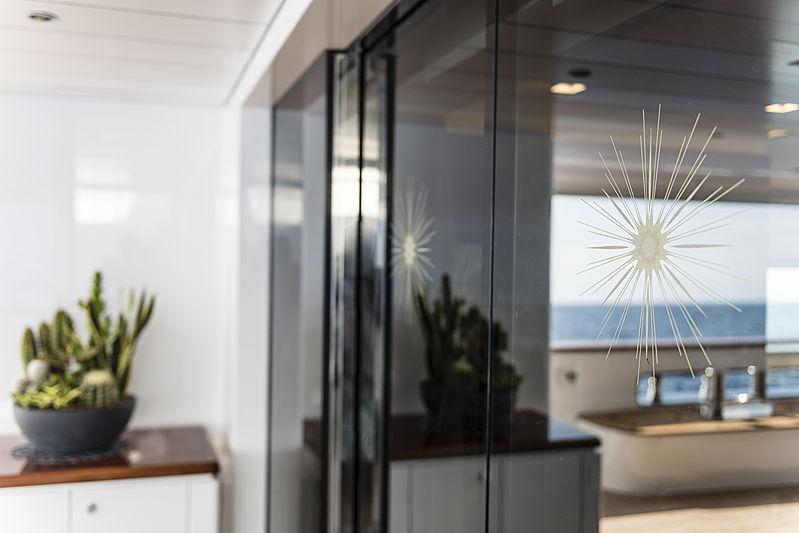 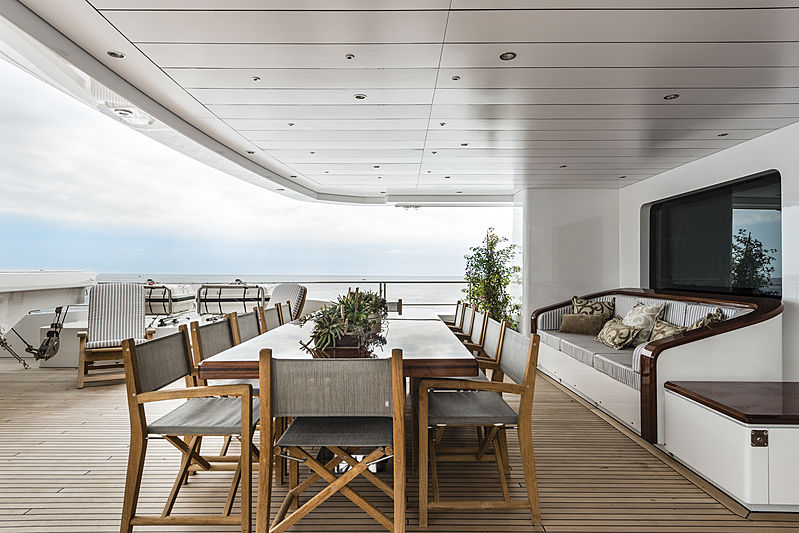 Photo: A&B Photo DesignKeen to make use of all the usable exterior space, a specific request of the owners was the small observation deck perched in front of the radar arch. On the foredeck is a large sunbathing area above the rescue tender garage and a cosy seating area that has been kept safely separate from the mooring station in the bow. 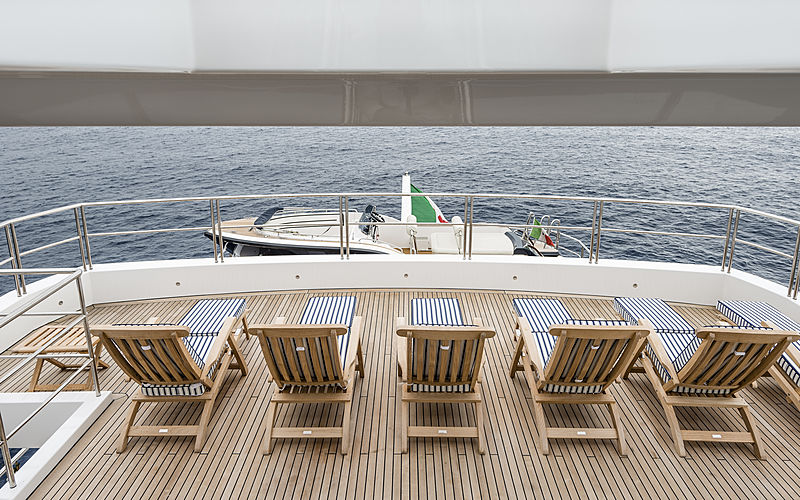 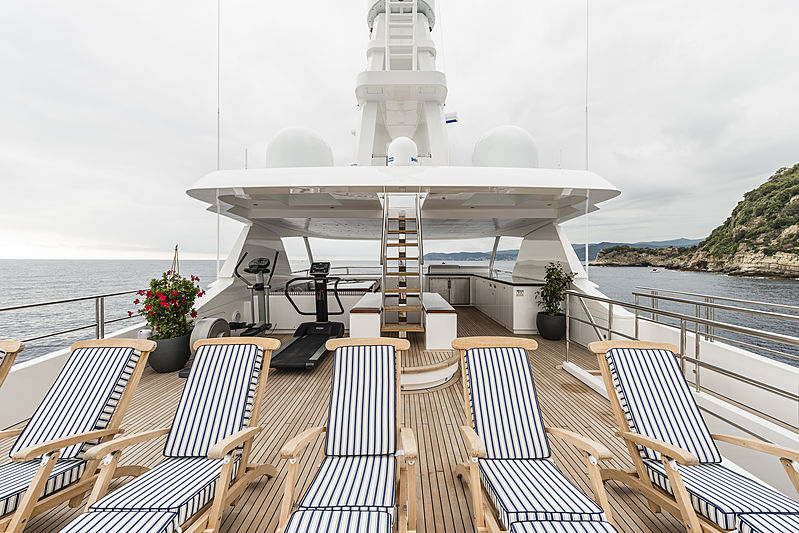 Photo: A&B Photo DesignThe guest tender, custom-built to echo the styling of the mother ship, is stowed on the upper aft deck (with a central crane so it can be launched from either side). This frees up space for a large lazarette on the lower deck to house a variety of water toys such as a Laser, Optimist and paddleboards. 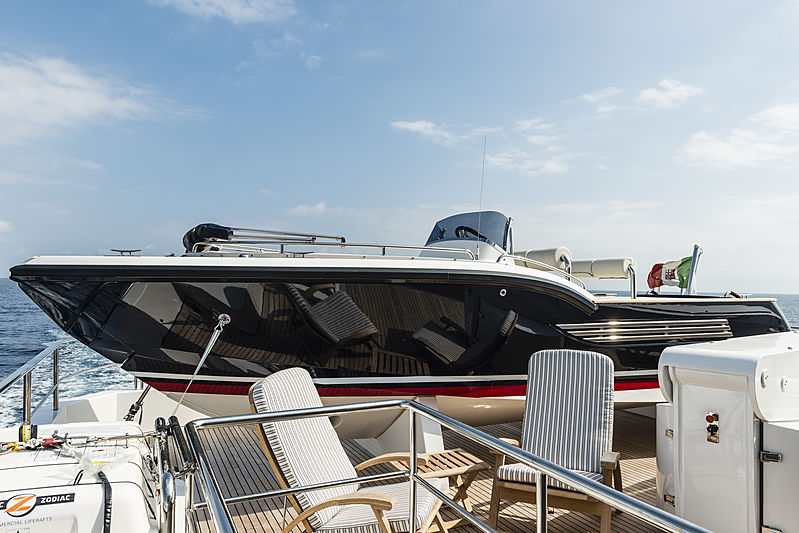 Photo: A&B Photo DesignThe round bilge hull with a bulbous bow was CFD-optimised and tank tested to focus on fuel economy. Indeed, at a cruising speed of 10.5 knots the twin CAT C32 ACERT main engines (745kW) burn just 55 litres/hour for an effective range of 7,000nm, thanks also to the high diameter/ high-efficiency propellers. 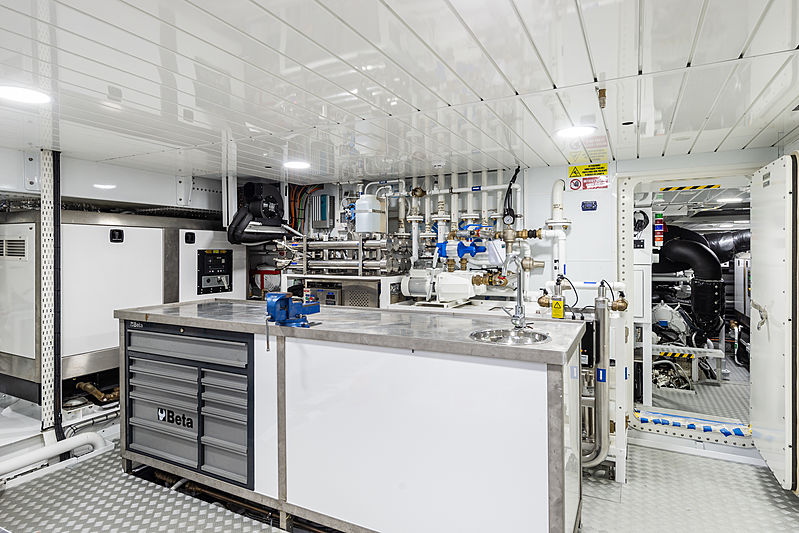 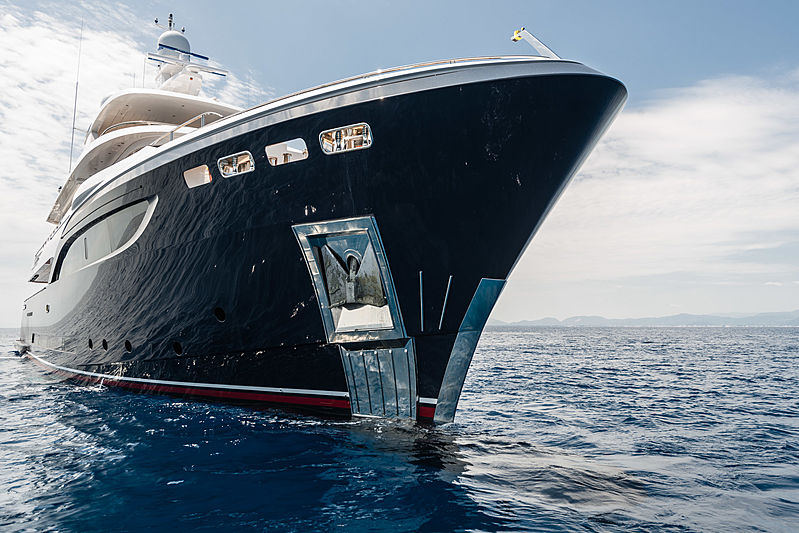 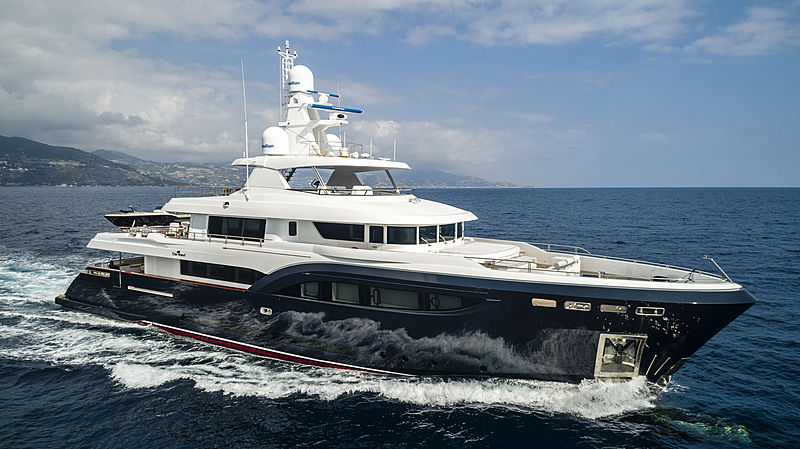 Photo: A&B Photo DesignFollowing delivery early last summer, Stella di Mare set off on her maiden voyage in the Mediterranean, spending just four days in port during a cruise that lasted more than a month. But she also proved the designers had fulfilled her owners’ brief in more telling ways: “When the family disembarked they told me they felt completely at home as if they had owned the yacht for years,” says interior designer Umberto Fossati. “And they’re already talking about their next yacht!”

Superyacht of the Week: Exploring with Endeavour II

Superyacht of the Week: Luminous Latona

Superyacht of the Week: Magical Majesty 140