When Aquila was sold in 2014 under her previous name as Cakewalk, her experienced new owners already had a clear vision in mind what they wanted their new yacht have turned into. Fast forward a season’s use and 12 months of being under wraps at Pendennis’ refit and new build facility in Falmouth, Aquila was finally set free in the summer of 2016 ready for cruising with her new family. Seemingly unchanged from the outside, this Anglo-American project is, as we found out, perhaps the ultimate embodiment of the expression judging a book by its cover. 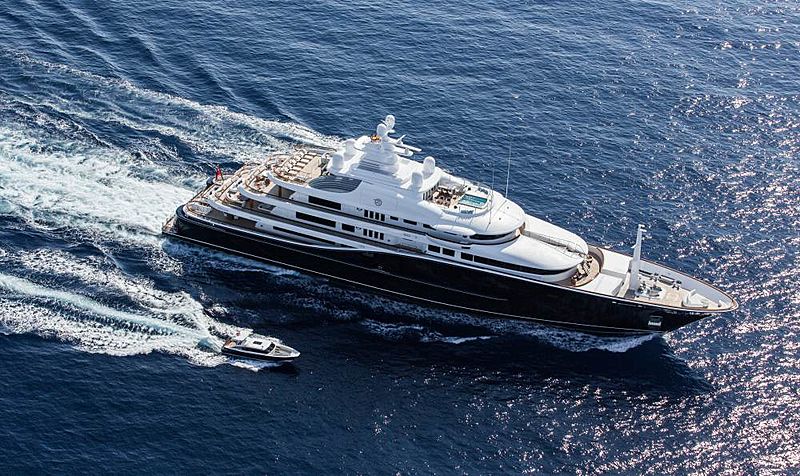 As with their 65-metre Italian superyacht, her owners surrounded themselves with a familiar team of designers and advisors for this project. As interior designers of that project, there would be no studio better suited to undertake this redesign project than Redman Whiteley Dixon (RWD). Headed by Tony Dixon, the team also worked together with Susan Young Interiors who is no stranger to the owner’s style, having worked on their residential projects as well as their smaller yacht. As yacht managers, Burgess was involved in overseeing technical management and operations and making sure Aquila is charter-ready for this Caribbean season. 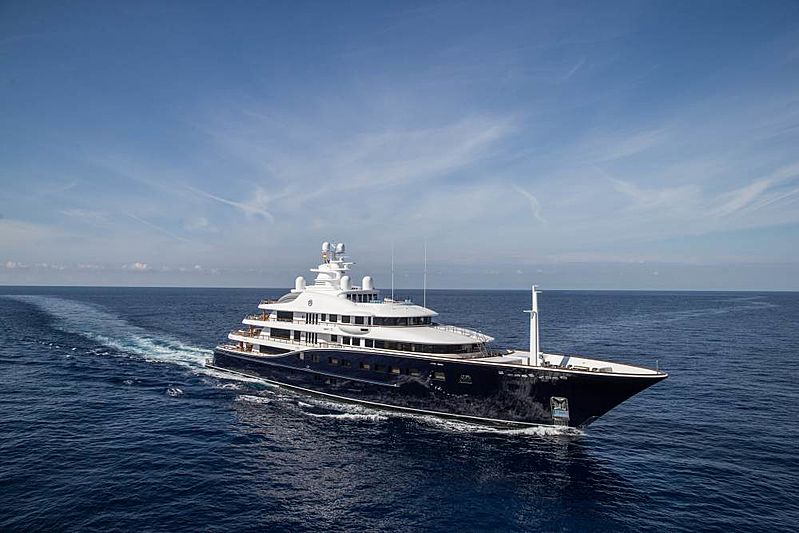 Pendennis was effectively tasked with the largest refit project ever completed in the U.K. – something that, as Joint Managing Director of Pendennis, Mike Carr explains, the shipyard was prepared for. “In order to effectively manage a project of this scale, Pendennis assigned four project managers, each with responsibility for specific aspects of the programme.” The true scale of the project is put in perspective when considering the 1000 people involved with Aquila’s transformation during the height of the project. 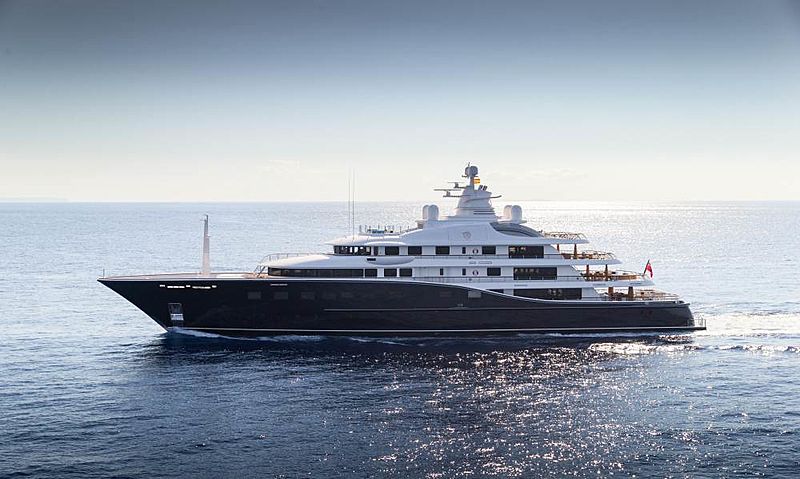 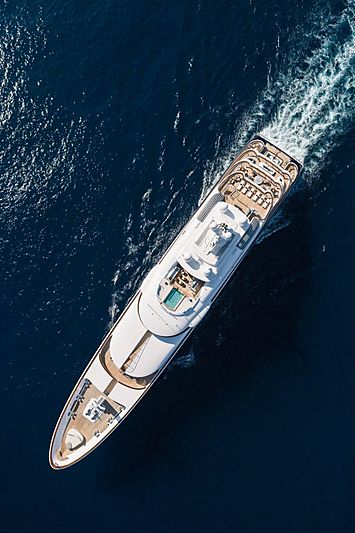 Apart from freeing up her deck spaces and making guest areas more useful, Aquila’s exterior has remained largely the same. The sundeck is where RWD applied a new arrangement that made room for a larger bar on the aft deck and a greater lounge area to match. The area was also remodelled to house a DJ booth, drop-down disco lighting and a large cinema screen with complimentary sound equipment. Gone is the colourful mosaic-tiled splash pool on the aft deck and instead, a Jacuzzi can now be found forward of the new wellness centre that separates the two areas. 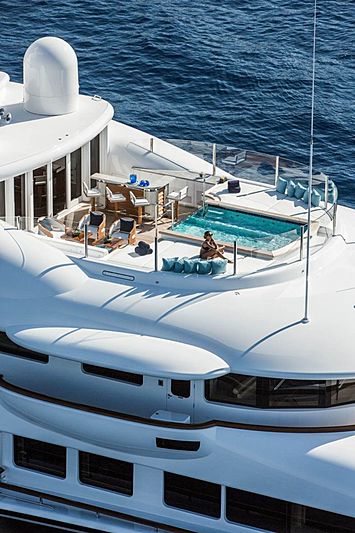 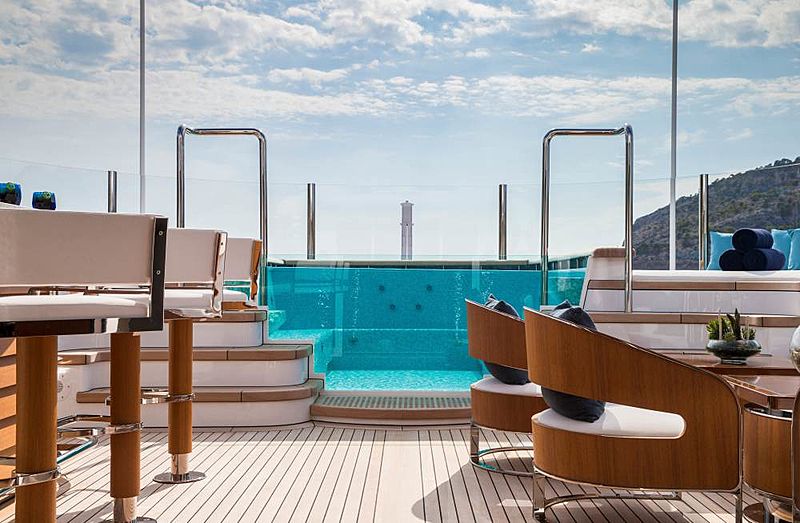 Throughout the project, RWD made the most of the ‘excellent platform and technical facilities’ that Tim Heywood’s Cakewalk presented, and built on these to suit the lifestyle of Aquila’s new owners. The beach club is just one such example where a new gym area was created in this beamy part of the ship. A skylight in the deck above adds some natural light to the sheltered lounge area that leads out onto the fixed swim platform. 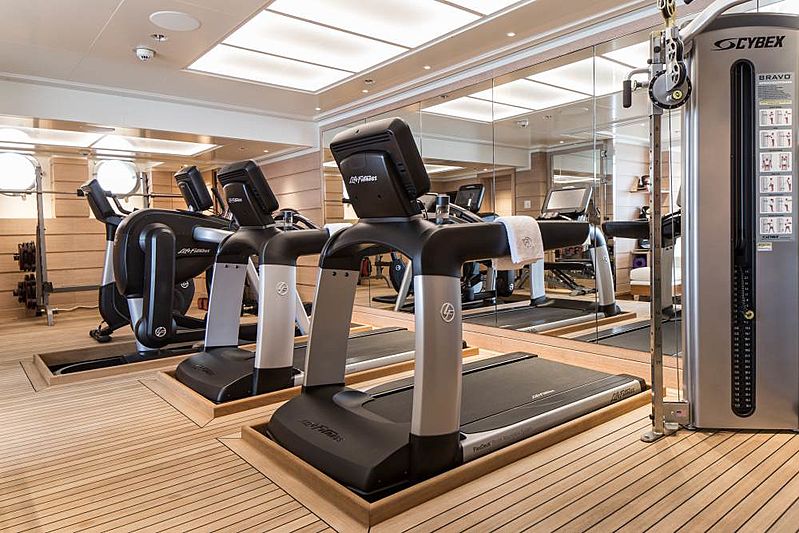 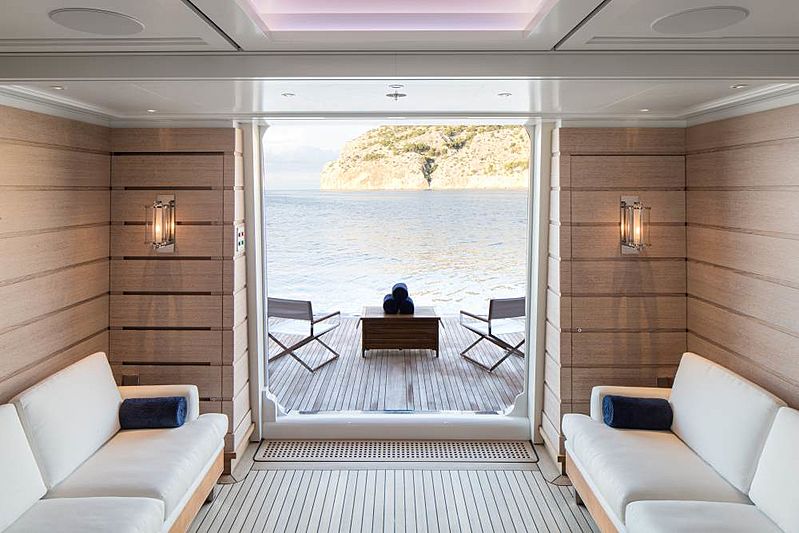 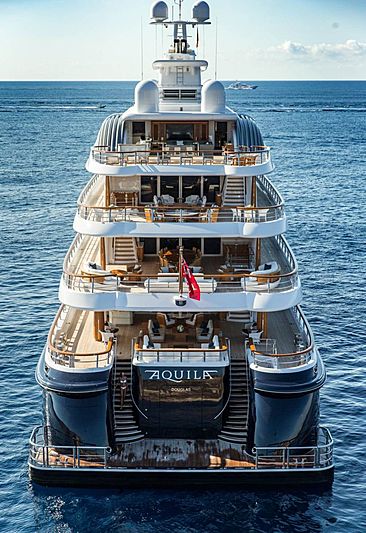 Other exterior deck spaces have been refined and non-essential elements removed to better facilitate her owners’ love of hosting groups of family and friends onboard.

Anyone familiar with the more traditional American interior that made up Cakewalk will immediately be able to recognise the amount of work that went into the restyling of Dalton Designs’ original layout which today is virtually invisible on Aquila. Pendennis stripped back 750 square metres of guest, social, and technical areas on board to a near in-build state before applying RWD’s newly designed vision. German superyacht installer Metrica worked with Pendennis’ dedicated interior department to fit the custom décor onboard. 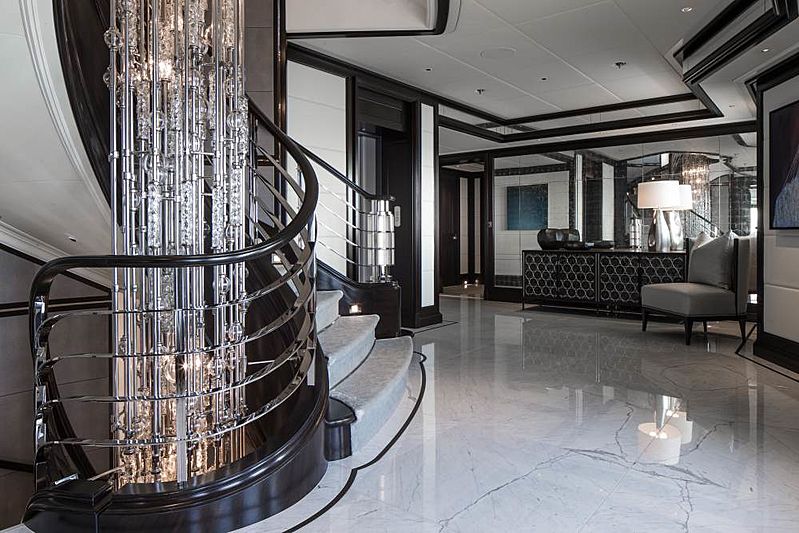 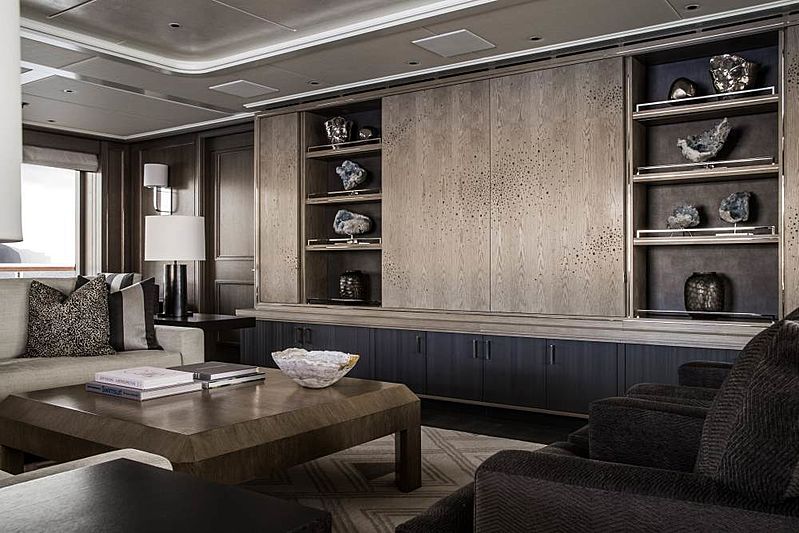 Her owners’ close involvement throughout the project reassured Dixon that they were on the right track by aiming for a traditional and balanced style presented with a contemporary twist. Nothing too overboard and everything in its place, but leaving enough room for guests to express themselves freely while onboard. After all, Aquila is available for charter though Burgess. Guest areas are elegantly finished with dark panelling and contrasting deckhead and carpet materials. Clever lighting solutions throughout softens the mood and rounds off that elegant touch of the interior. 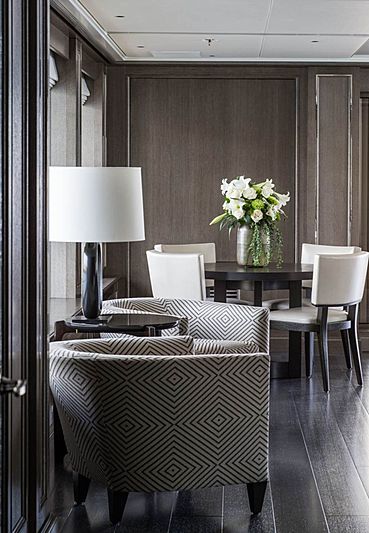 A very clear example of the amount of restructuring work that went into the project is visible on main deck. A previously unused space, the main saloon was made family-friendly by flipping the existing layout on its head. The seating area aft was removed and guests can now enjoy dining a little closer to the outdoors. 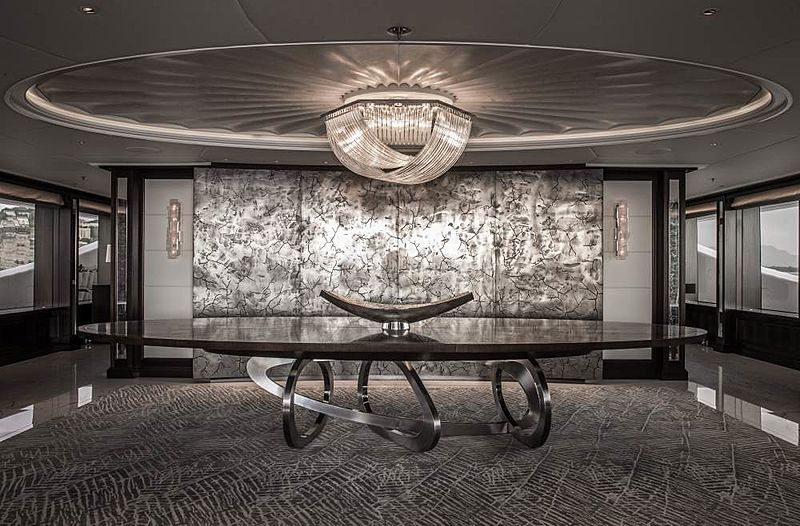 The real work, however, came with the building of an enclosed private cinema space just forward of the dining area. Situated two decks above the engine room, great attention was paid to eliminate any noise transfer from adjacent social areas and vibrations from the engines so that guests would be able to enjoy their movie experience while underway. Equally important was to minimise any noise leaking from the cinema to the saloon outside. This was achieved by placing the entire room in its own 'floating' box which is effectively suspended on sound and vibration-dampening pads independent of the steel construction below, meaning guests can now enjoy their favourite film on that giant 98-inch screen, undisturbed. 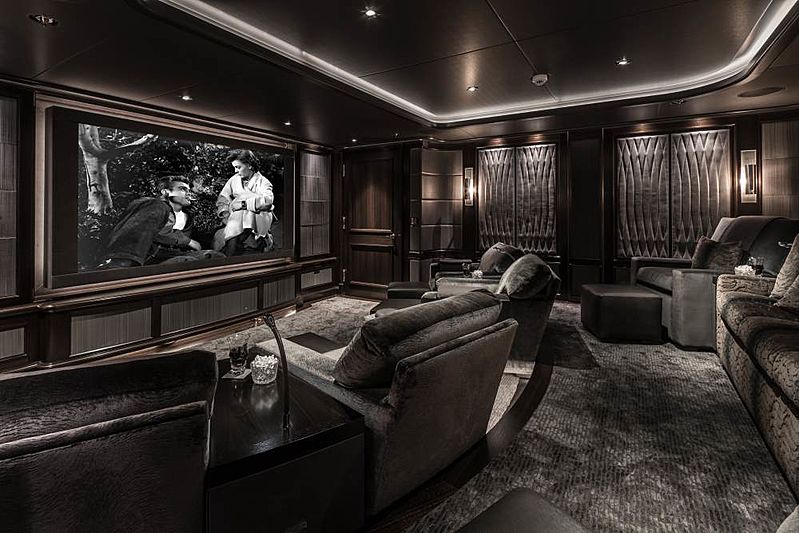 Another key stage in the project was the reconfiguration of the master suite. Located forward on the owner’s deck the suite we see on Aquila is completely different and much larger to what it once was. Not only were the bulkheads moved aft, but the bed was also relocated from its centre line position and offset to port, allowing RWD to create an intimate lounge area on the starboard side. The traditional cherry wood was stripped and Dixon made use of fumed eucalyptus and dark stained oak to achieve the desired look. 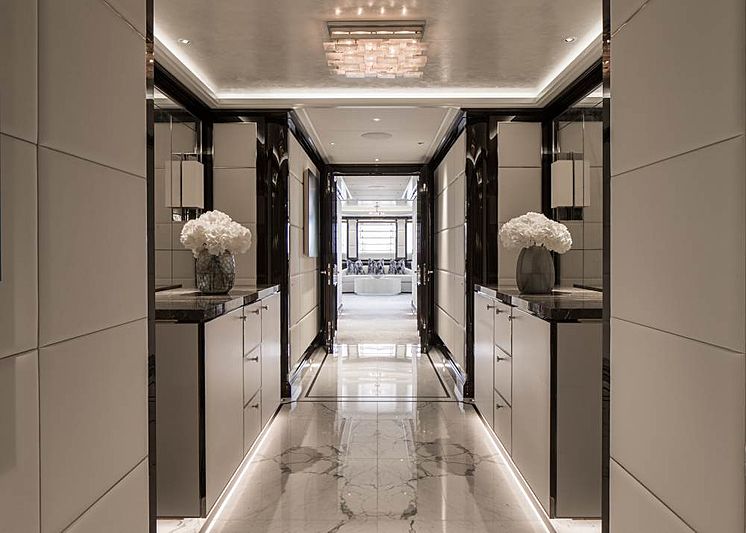 What has remained, however, is the spectacular panoramic view from the suite, which can now also be enjoyed through a private access point that puts the owners directly onto their own 60 square metre Portuguese-style deck.

The exclusive features continue as one moves aft on this deck to reach the owner’s saloon. Tones of royal blue add colour to this gentlemanlike lounge with its metal inserts abound and rich leather surfaces. Bespoke tobacco-leaf imprints behind the London bar, as it is known, creates an interesting a visual centrepiece. 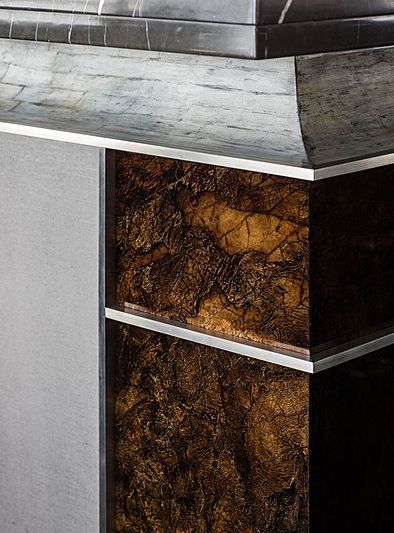 Connecting all the decks is a grand spiral staircase that runs from main deck all the way to the sundeck. The design teams worked with a Czech artist to make sure the custom-made 11.2-metre chandelier with its 800 individual hand-blown glass pieces will fit perfectly. The surrounding staircase is decorated with leather touches and finished with a new glistening stainless frame that is connected to the art piece via 500 individual stainless steel fittings for stability. The staircase itself is also mounted on anti-vibration mounts to further eliminatepotential damaging shocks. 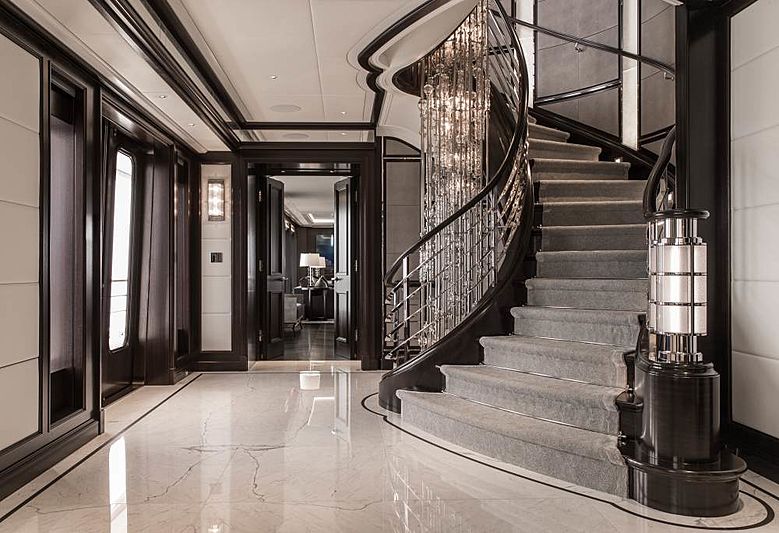 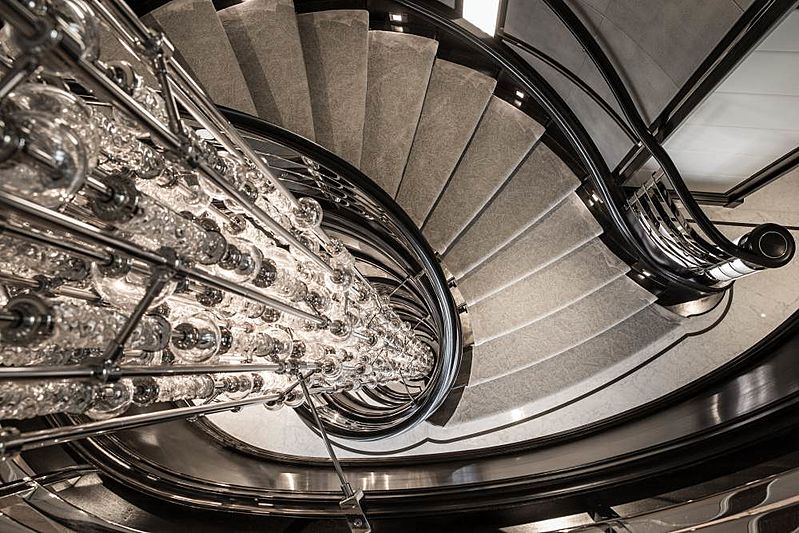 Taking her Latin name from the eagle of all eagles, Aquila has been tastefully transformed to show her true American colours and is now ready to once again spread her wings across the open seas. 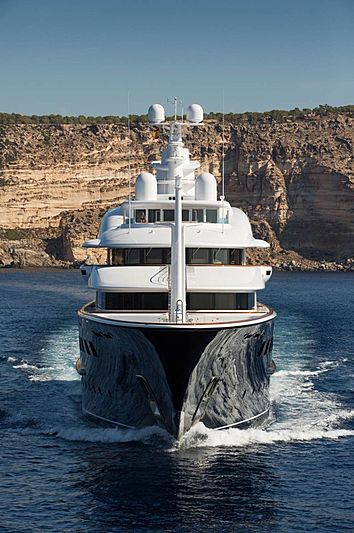