With her distinguishing sports car look and sleek, dynamic exterior, the 50-metre Aurora remains one of the wildest launches of 2017. The Italian stallion built for a young owner is designed to look every part a speeding demon, with the volume and interior comfort of a limousine. More Transformer than superyacht, we took a look on board to get a better idea of how life on this custom Rossinavi is like. 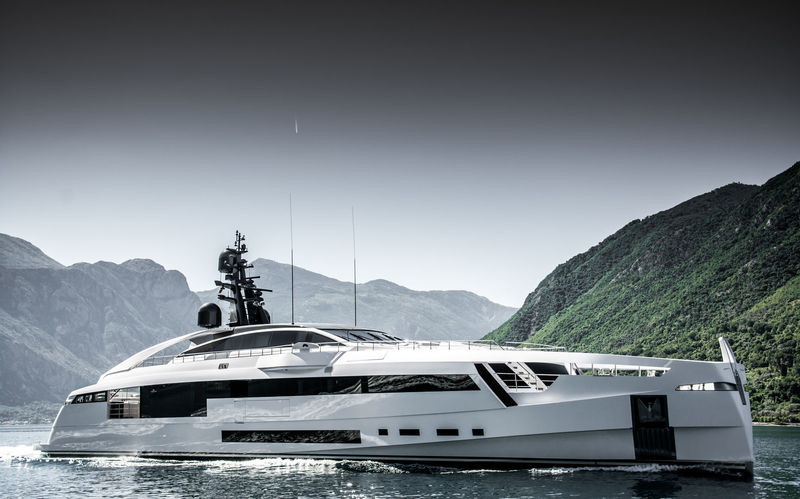 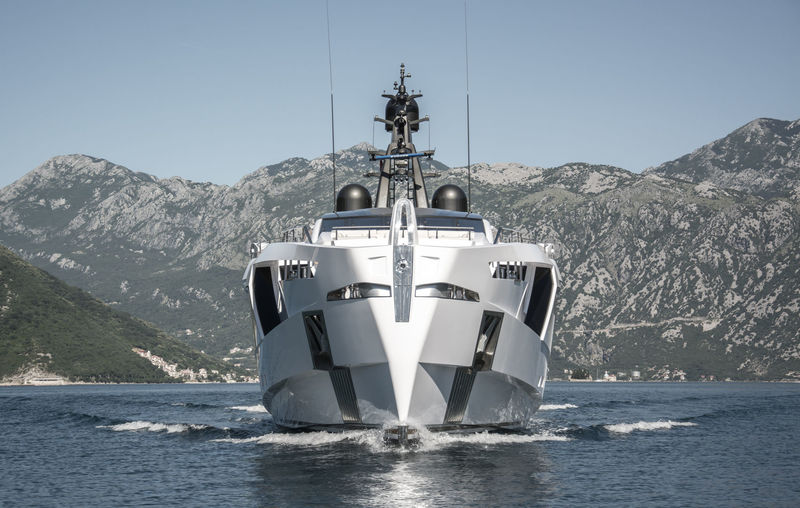 The design approach revolved around creating a sub-500 GT vessel with a massive beach club where the owner could spend his days at anchor in a claustrophobic-free environment. From here, designer Fulvio De Simoni and Rossinavi were given free reign to create something exceptional in terms of exterior styling. 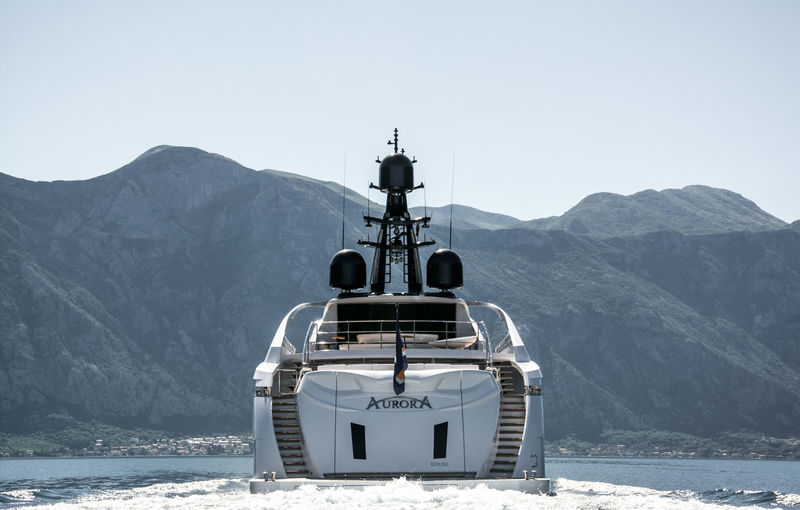 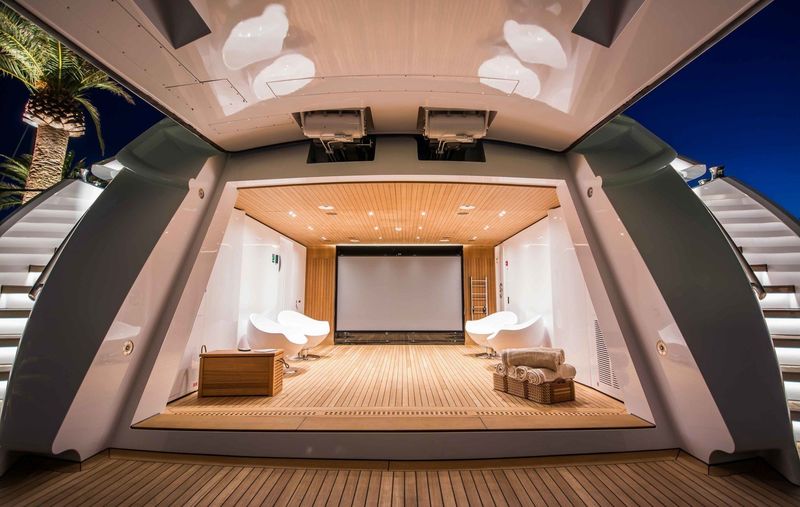 A unique full-beam main deck layout was opted for to help get the most of the available interior volume as well as keeping exterior line sharp and clean. Exterior traffic flow is mainly limited to the upper deck where two side decks connect stern with bow as you pass the upper master suite (there is a second master suite forward on the main deck) and the wheelhouse. 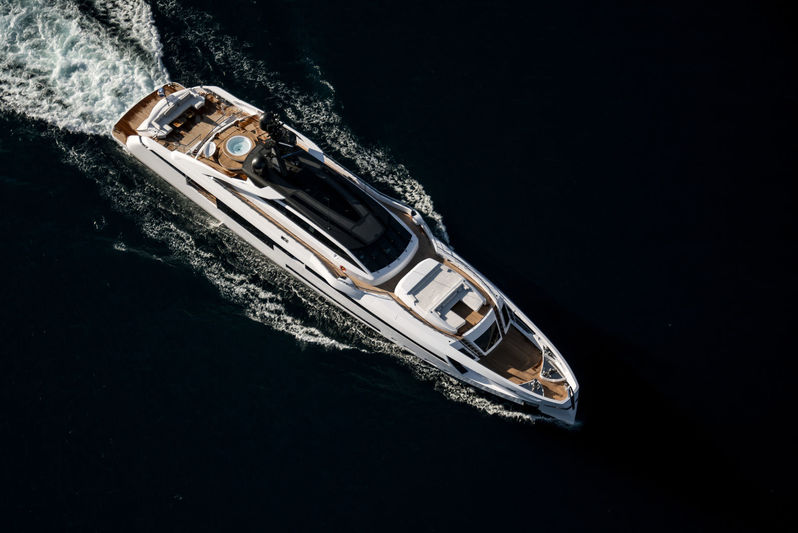 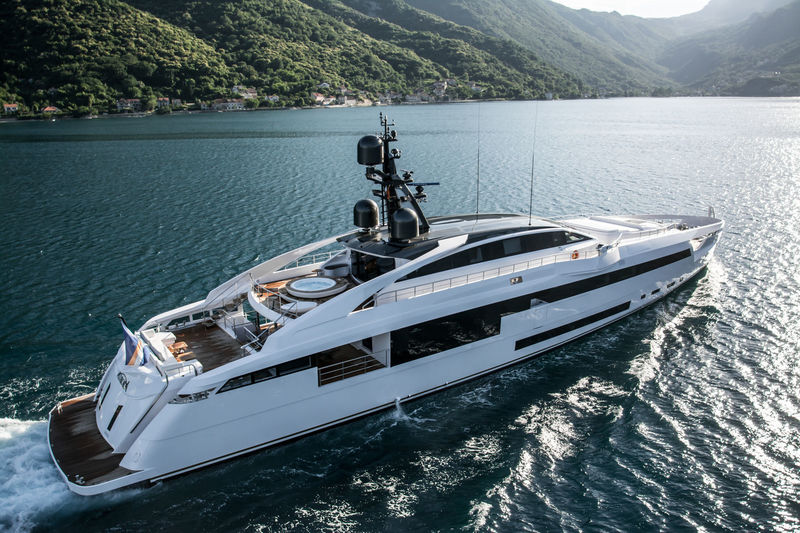 The forward part of the exterior is dedicated to a grand lounging area with a big sun pad and plush seating area. From here, two staircases lead down to the foredeck technical area which makes just as a good chill out spot for guests looking for that extra bit of privacy. 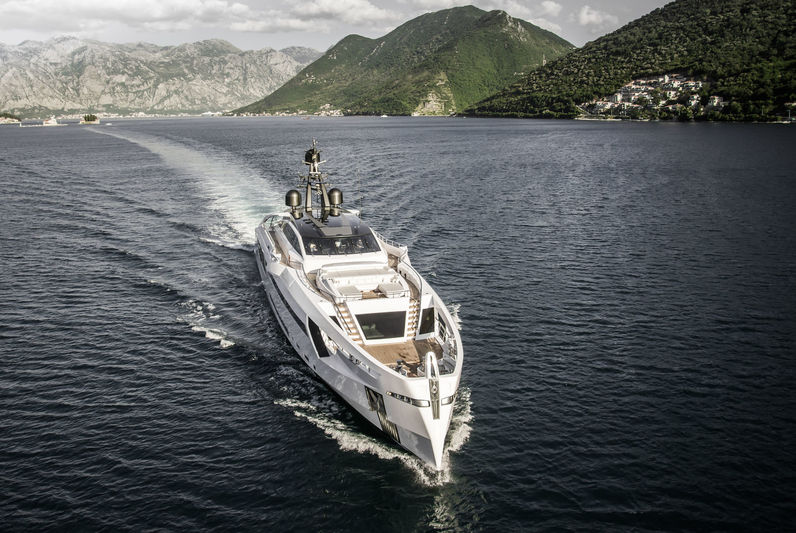 The upper aft deck is where Aurora’s pool is situated which is conveniently placed right outside the upper master suite – a perfect way to start the day. 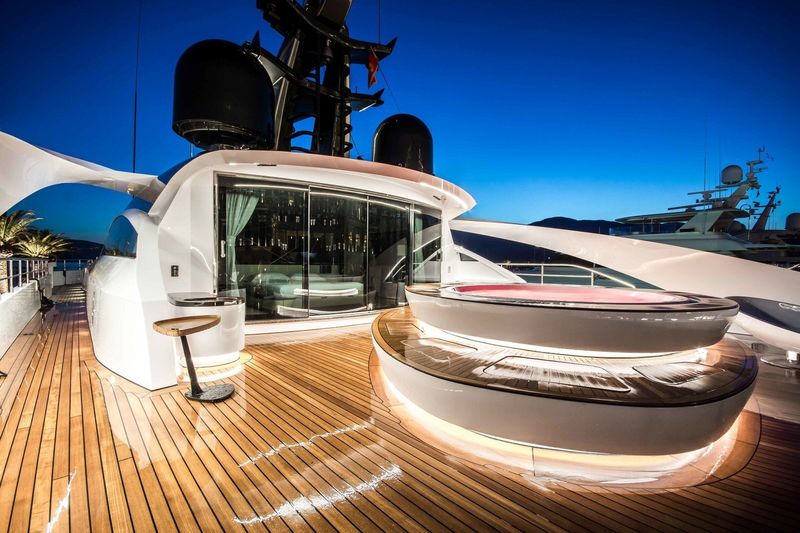 In stark contrast to the masculine exterior, Aurora’s interior designer Achille Salvagni went for a toned-down and more lifestyle-friendly scene on the inside. Custom pieces from Salvagni’s studio bring curves into play that one would not expect after having studied the sharp exterior. Velvet and a selection of organic materials encourage one to feel and connect with spaces, making Aurora seem, for a moment, half human. 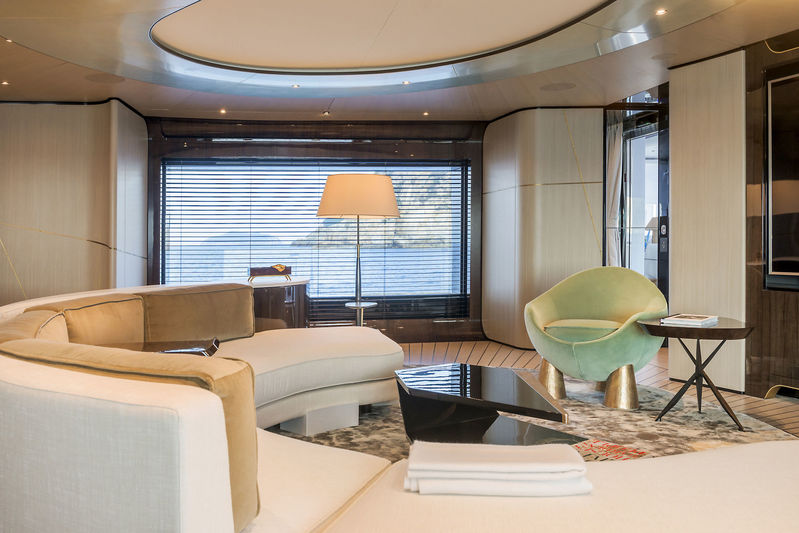 Step onto the bridge, however, and you are quickly reminded of the aggressive nature of this beast. The all-black control centre comes alive at night with red LED accent lighting that would, at night, scare away any pirate ship. It is here where the captain controls the two MTU M93L engines that are responsible for Aurora’s 21-knot top speed. 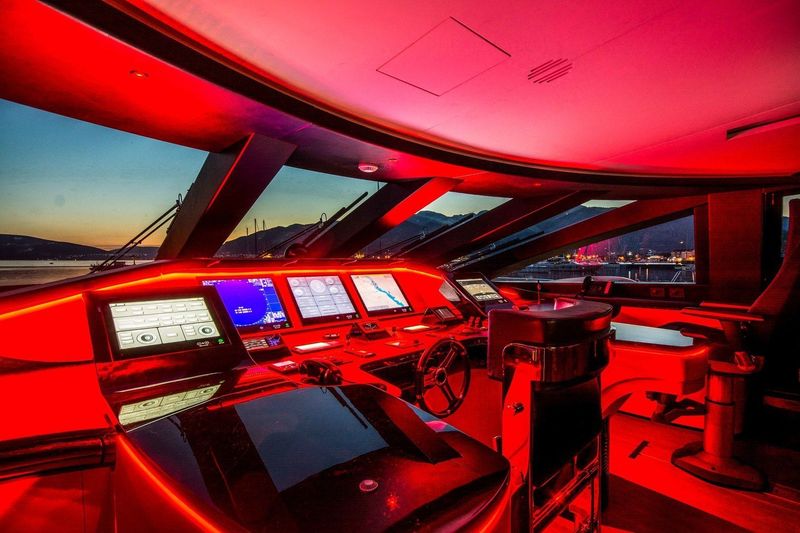 The interior layout resembles a 60 to 70-metre vessel with three large suites on the main deck alone, something not found on every yacht of this size. This is of course only possible because of the full-beam main deck and allowed designers and engineers to also experiment with technical areas in much the same way, such as the full beam tender garage forward of the beach club.

The main saloon is a combination of a funky lounge space and oversized dining area set amongst touches of black and gold and other cold metal surfaces for an ultra cool feel. The full beam arrangement makes for an extra light setting thanks to those life-sized side windows that let is untouched natural light. 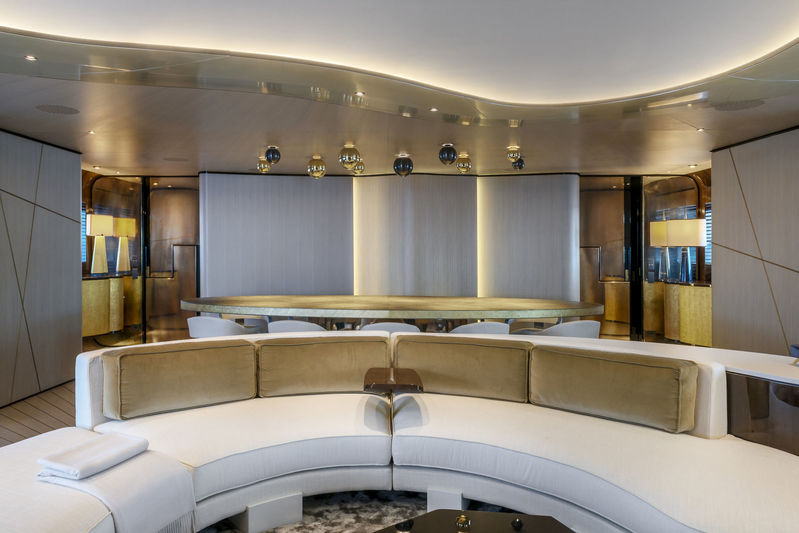 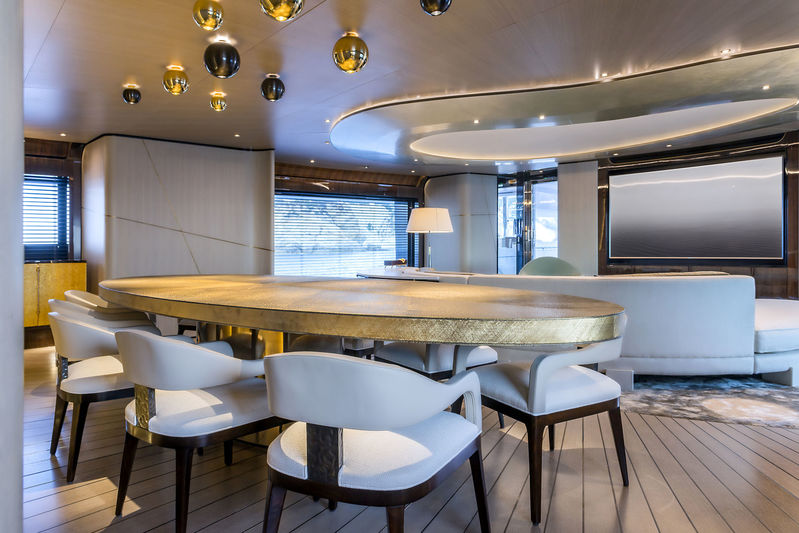 From here, a central corridor leads past two VIP staterooms before reaching the main master suite. With a true forward-facing view like few other 50-metres can offer, it is impossible to ignore the 180-degree view that hits you in the face as you enter the suite. Two cut-outs in the hull outside help the cabin to not become an enclosed box with a view that only looks over winches and an anchor windlass. In addition, a curved sofa and loose furniture give this suite a real apartment feel. 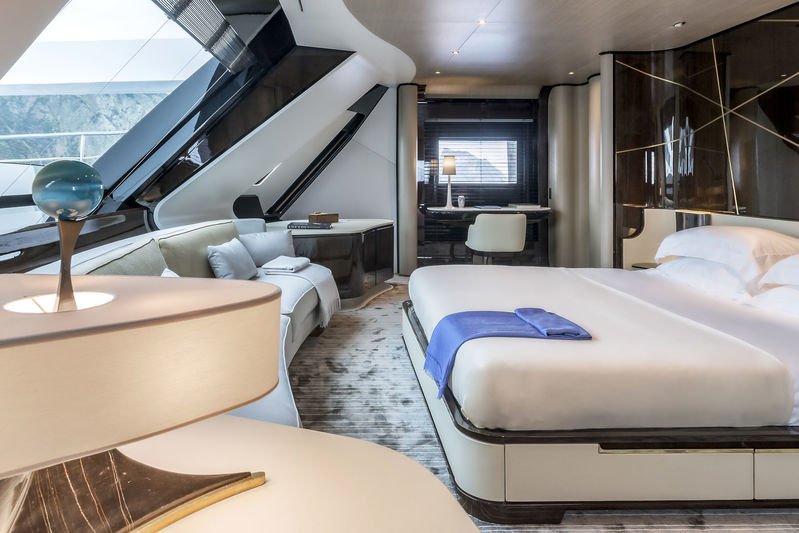 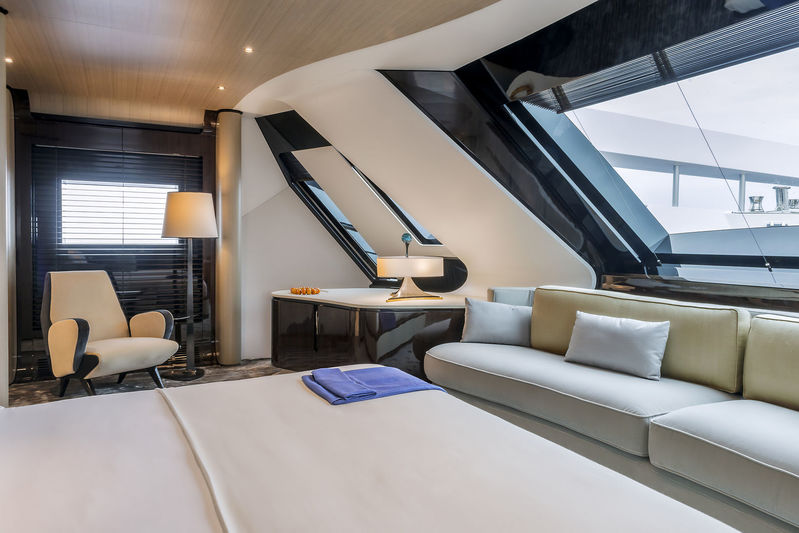 The master ensuite is adorned with reflective surfaces ranging from stainless to high-gloss woods and marbles. 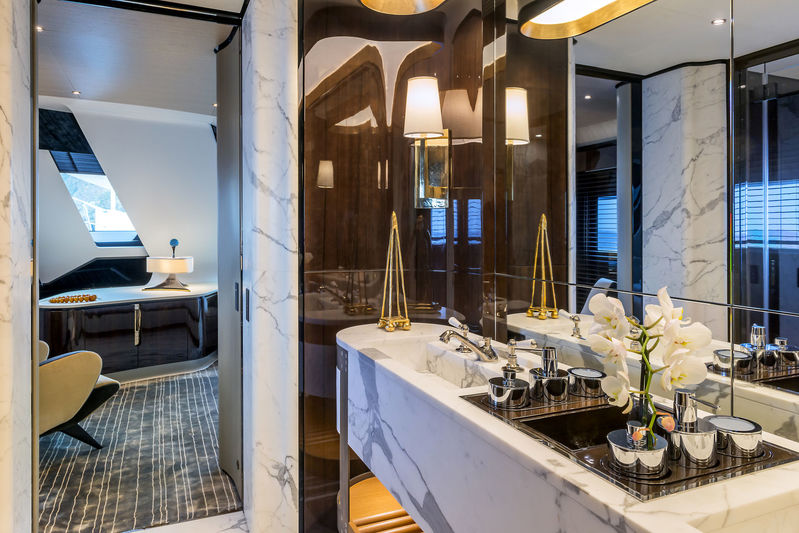 The second master suite is directly connected to the exterior via a curved glass door that leads out onto the upper deck. The same curves that make the main saloon such an inviting space are also used here to soften the edges from the deck spaces just a few steps away. 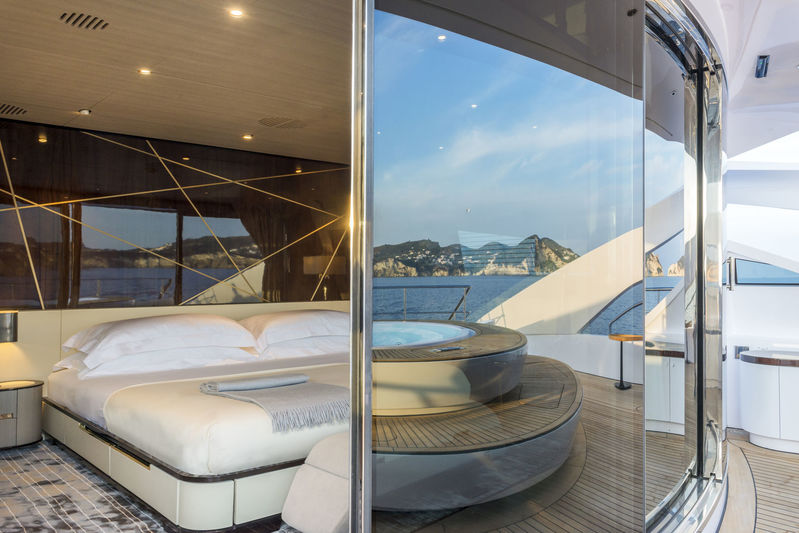 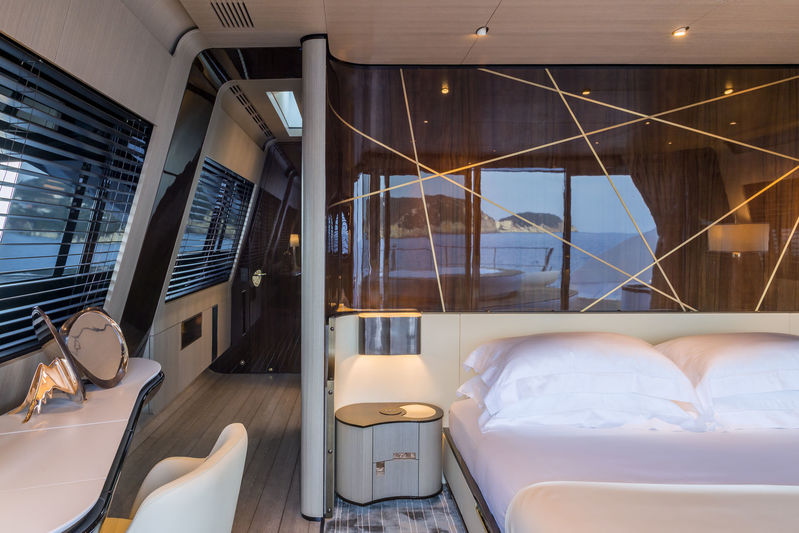 Downstairs there are two additional guest cabins, taking the total guest count to 12 overnight passengers. With smaller portholes than the cabins on deck, lighting played a critical part here and the same reflective surfaces as found in the master suite create a special atmosphere here by radiating a glowing aura with warm LED light as the source. 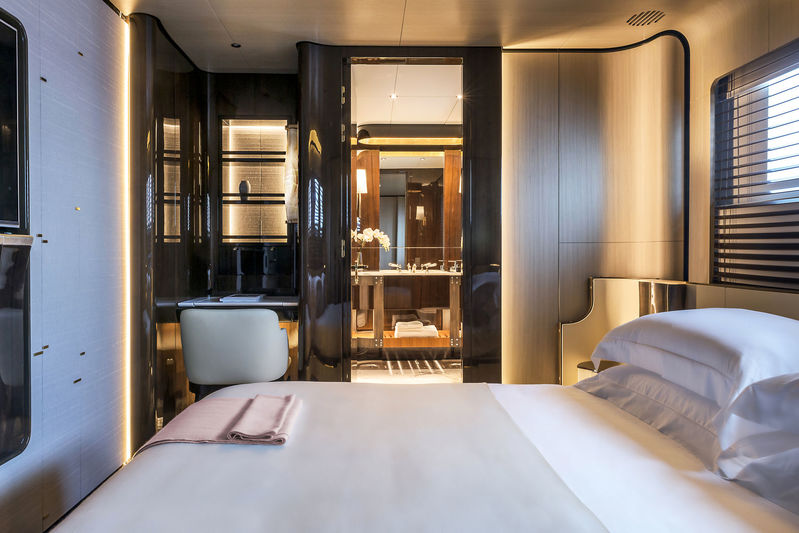 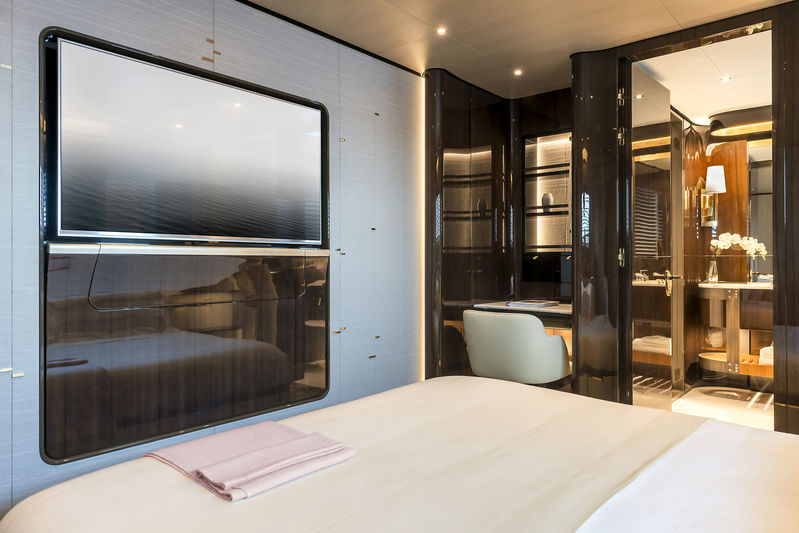 The 49m Aurora at sunrise