Just as a world of fairy-filled forests, magical mushrooms and mystical unicorns, so too is Baglietto’s new 54-metre superyacht just a taste of what the Italian shipyard is capable of. Following in the footsteps of the 53-metre superyacht Gitana (now Blanca) and Baraka (now Burkut), Unicorn is a prelude of the brand’s new direction and what we can expect from the 55-metre project currently under construction in La Spezia. We take a closer look onboard this noble creature. 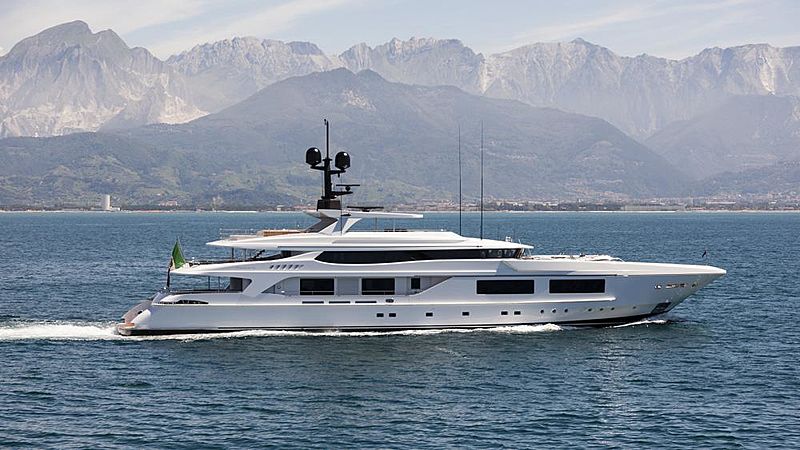 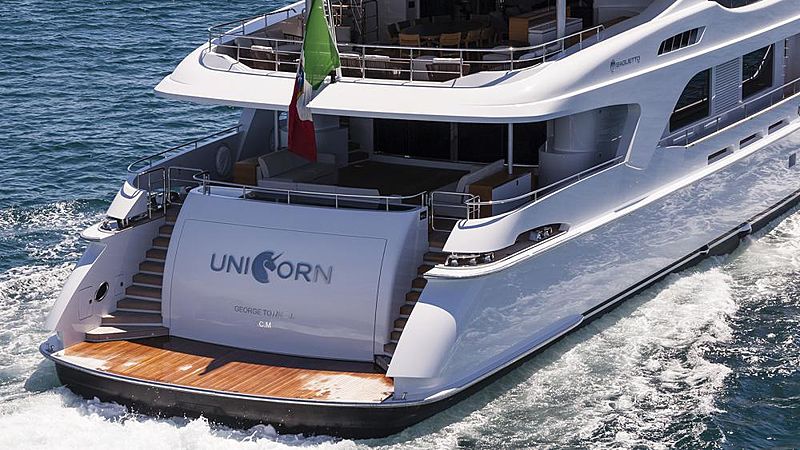 Staying true to their heritage, with one eye fixed on the future, Baglietto once again partnered with acclaimed Italian designer Francesco Paszkowski. Unicorn builds on the brand’s strong naval roots and Italian yachting flair by having delivered a reliable ocean-going superyacht that carries that familiar sense of flair and style one comes to expect from Baglietto. 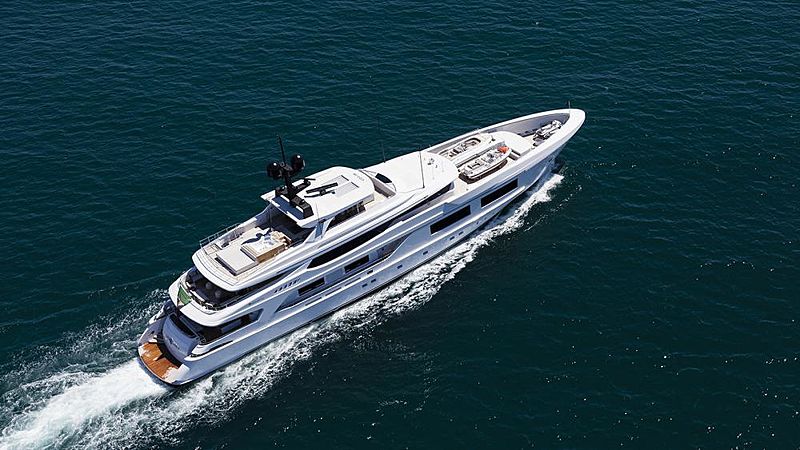 One noticeable trademark that sets Unicorn apart from Blanca and Burkutis the reverse bridge windows, giving the yacht a much more defined and purposeful look. This increased overhang results in a larger sundeck area one deck above. 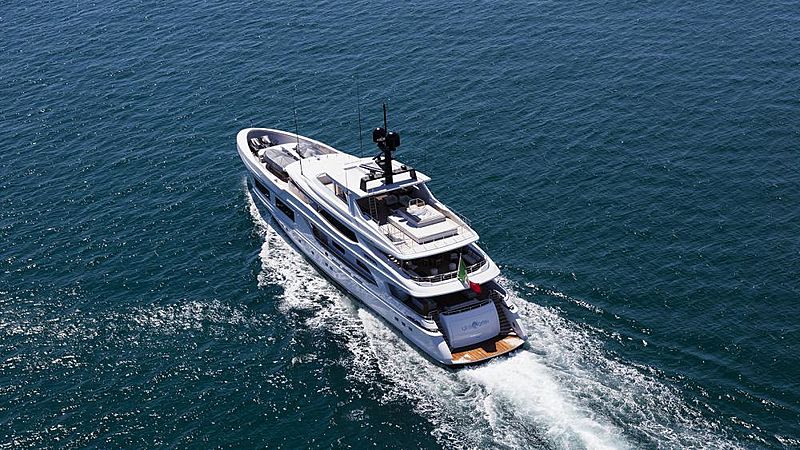 The 40 square metre sundeck offers a prime sunbathing area that surrounds a family-size Jacuzzi. A 12-seater dining table and barbeque area is perfect for outdoor celebrations. 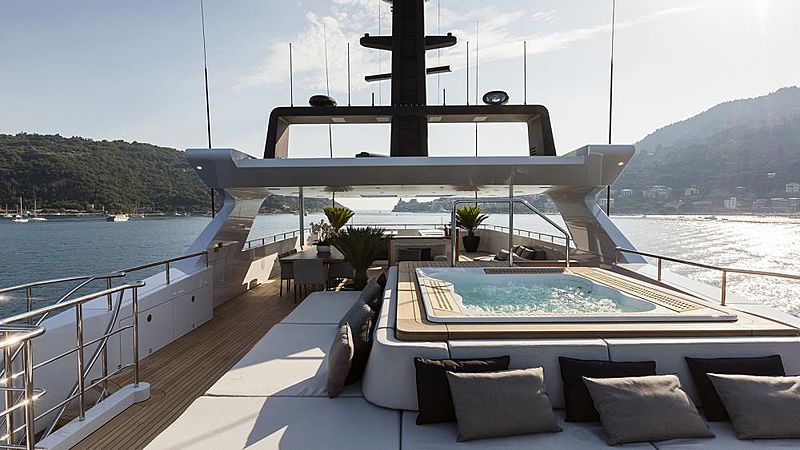 Paszkowksi worked together with the owner, represented by Wim Koersvelt during the build, and architect Margherita Casprini on Unicorn’s interior. The result is a high-end glamourous affair finished with a careful selection of lacquered surfaces and rich fabrics made by the owner’s designer Eric Kusteri and decorator, Sandrine Adeline. 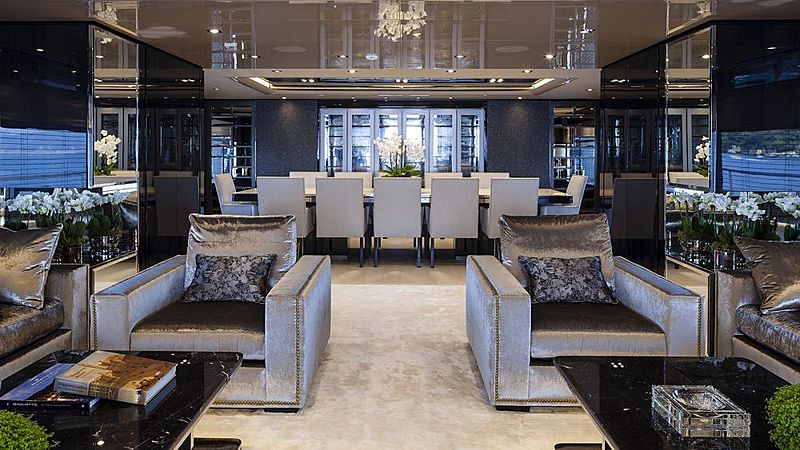 A theme that runs throughout the entire yacht is the colour-coordinated surfaces. Horizontals are finished in lighter tones of white and pearl, while vertical areas bare darker shades such as graphite, black, and silver – as is visible in the main saloon. 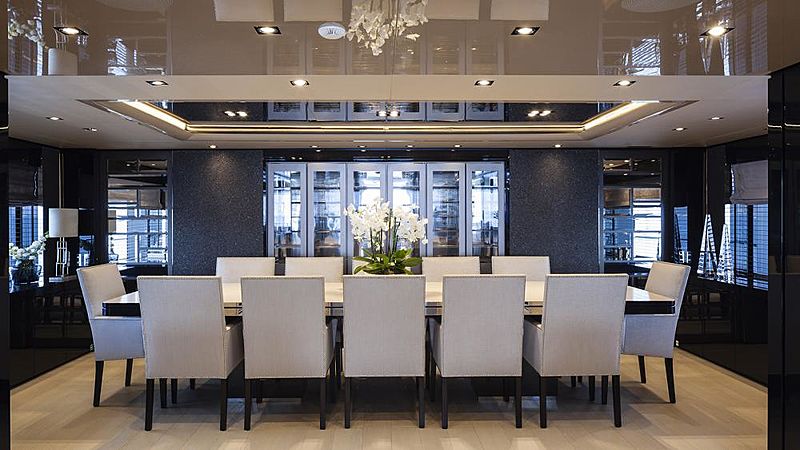 The skylounge above features the same stylistic features, but in a more informal way that suits the home theater space that it accommodates. Sophisticated loungers matches the shape of the superstructure to create the ultimate chill-out corners to enjoy one’s favourite film from. The outside area of this deck is fitted with a breakfast table, bar, and lounge area where the relaxing continues. 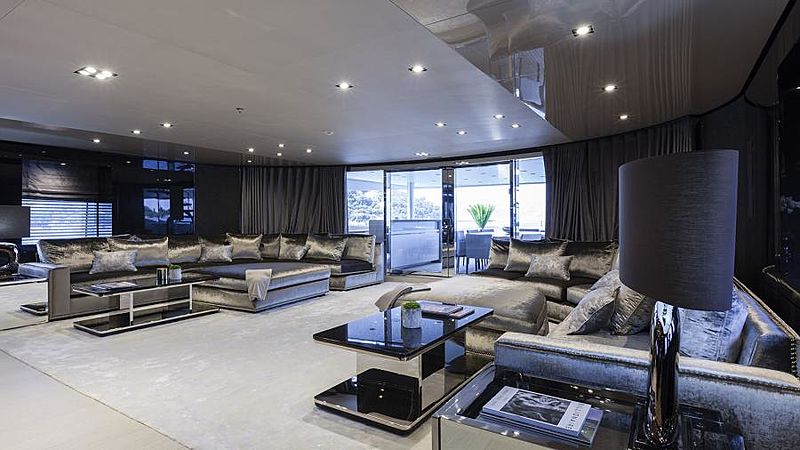 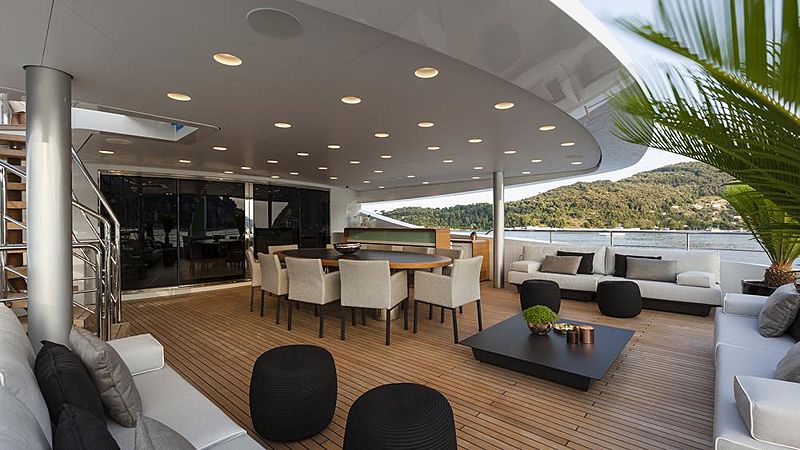 Unicorn’s master cabin is designed with a full beam set up forward on the main deck. With the master bed offset to port side, a large space is opened up to starboard where a casual circular sofa is placed. Large square cut-outs in the hull provide a lovely view to the outside world. 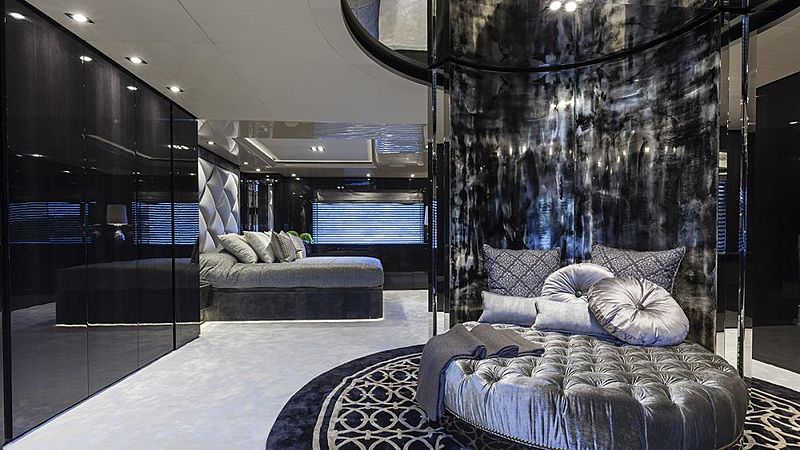 The ensuite bathroom, entirely in Marquina black marble, is fitted with a bathtub and a shower box with rainfall shower head and Turkish bath. 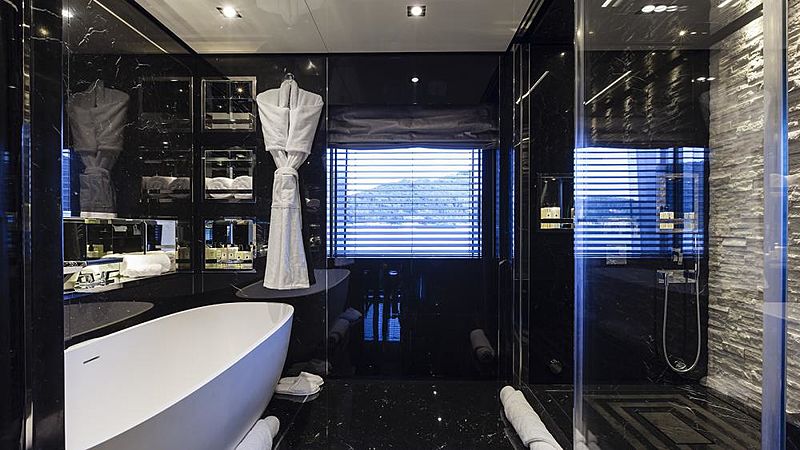 Three VIP cabins plus a guest cabin with twin beds are arranged on the lower deck, and, just like the master suite, are characterised by the use of precious materials. 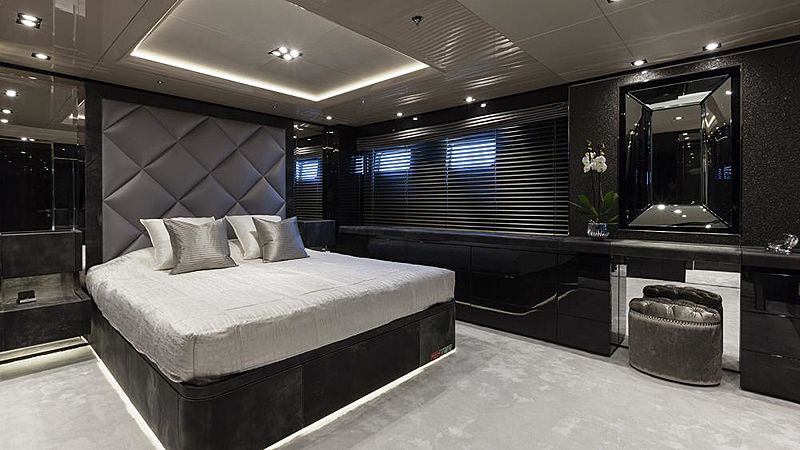 With Unicorn’s tenders stowed in a dedicated bay on the foredeck, the very aft deck at water level is freed up to facilitate a workout area and spa area with a Turkish bath. A fold-down transom hatch reveals a large swimming platform, ideal for those watersports day at anchor. 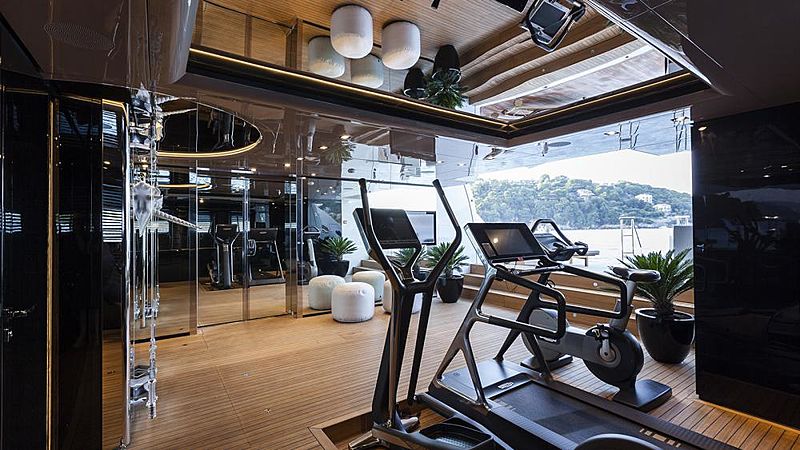 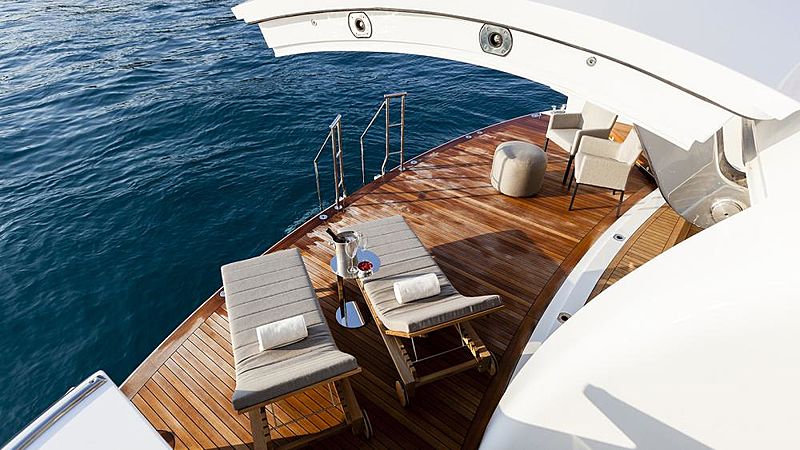 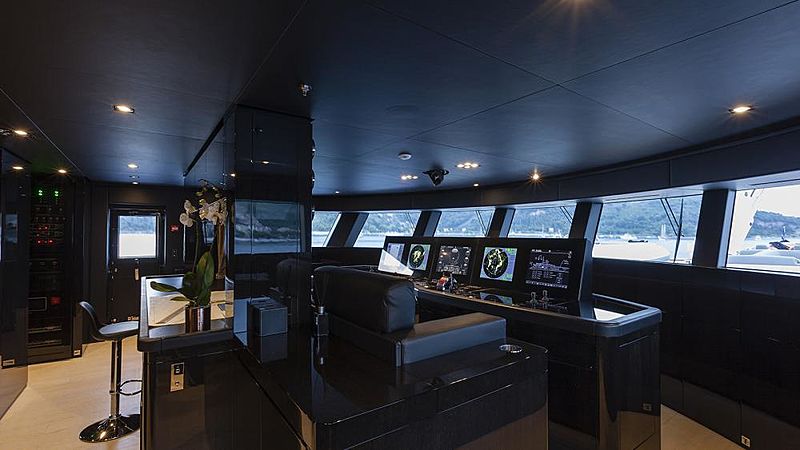