Designed by P.B. Pandelis and built in 1961/62 by the Atlantic Shipbuilding Company, Great Britain, Khalidia was launched with the name Ariane III and was retained by the Pandelis family for their private use. 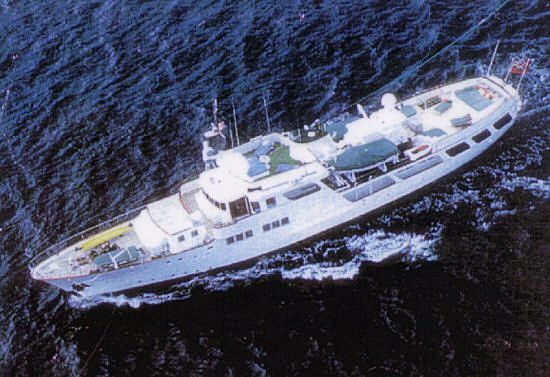 After much persuasion Mr Pandelis very reluctantly sold the vessel to the British business man John Bloom who later sold her to The Revlon family, of international cosmetics fame, when she was renamed Ultima.

Her next two owners were American business men who renamed the vessel Kara Kara followed by Tracinda Jean. Probably her most famous owner to date was Mr. Adnan Khashoggi, who was responsible for the name change to Khalidia and was the owner for over twenty years until the mid nineties.

Up until the time Khalidia was put into a South of France shipyard for a major overhaul and refit she was a busy privately operated vessel making regular long distance passages including circum-navigation on more than one occasion.

It was from the shipyard in the south of France that our story begins and must be the story of how an amazing, tried and tested “Classic Motor Yacht” can be given a new lease of life.

While searching for a vessel to satisfy client requirements, Captain David Clews came across the motor yacht Khalidia lying in a shipyard not too many miles away from the shipyard he was project managing at that time. After extensive meetings with the yard, clients and lawyers a deal was done and arrangements were made to remove Khalidia to the shipyard being managed by Captain Clews.

The vessel was moved, some thirty miles or so, to the yard which was to become her berth for the next few years. After an intensive survey and much investigation it became apparent that the hull and superstructure were in amazingly good condition. Plans were drawn up and agreed with the new owners and the rebirth of the vessel thus began. The first job was to totally strip out the interior, this included all fixtures fittings, the complete engine room, all electrical and pipe work installations, everything had to go until a bare hull and superstructure was reached.

Unfortunately, before the end of the year 2000 the new owners found themselves in a position where they were no longer able to continue to fund the on going rebuild and work stopped. At this time the strip out had not been completed so the vessel stayed where she lay until she changed hands.

Following the premature end to the Khalidia project and other works at the shipyard, Captain Clews found himself managing the Premier Shipbuilding Company in Portugal where, out of the blue, came a request for the yard to take on the job of recovering Khalidia and completing the rebuild according to the plans made by Captain Clews some years earlier.

The contract was put in place and arrangements were soon made to remove Khalidia from the French shipyard and transport her to the Portuguese yard.

As quite often happens in life, things did not immediately go according to plan and it was to be some months before work would be able to recommence.

Due to the non-performance by a large international heavy haulage specialist for the movement of Khalidia from the docks across the highway to the main shed buildings, the shipyard decided to carry out the work utilizing it’s own resources.

First it was necessary to construct a huge trailer to carry the vessel. This was done by jacking up the vessel using two special lifting beams, constructed by the yard, and then building a thirty meter long by six meters wide trailer capable of carrying over four hundred tons. This construction was carried out below the vessel where she lay on the dockside. 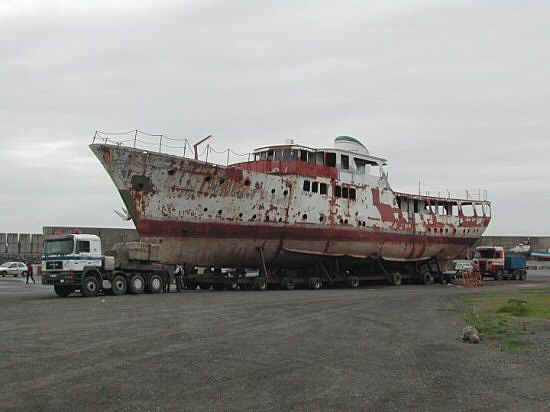 Finally with the trailer completed, Khalidia was moved, using two heavy haulage tractor units, to her new resting place in shed No. 2 where she is now being completely rebuilt by Premier Shipbuilding Company.

Since work began at PSC in Portugal 2.2 million Euros has been spent on her, virtually all steelwork has been completed and ship is ready to receive the proposed redesigned aluminium bridge deck structure.

Work on the new steering gear system has been started along with bow thruster tube installation and bushings for the new stabilizer system. No other outfitting work is underway at this time.

All work as been carried out in accordance with class rules and under the supervision of the class surveyor for the purpose of classification and MCA certification. This will of course allow the vessel to be chartered world wide.

Premier Shipbuilding Company is open to proposals and discussions with prospective investors to complete the rebuild of Khalidia. An advantageous financial package may be available to serious investors. When finished Khalidia could be presented to the charter market for the first time in the life of the vessel and it is expected that she would be an immediate success due to the extremely high standard of finish, an exciting new layout, her undoubted proven sea going record and her 4500 mile range. The new lower operating costs attainable with modern technology will also greatly appeal in today’s modern world . 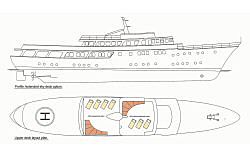 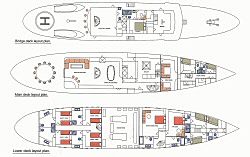 As a private yacht, Khalidia has all the wonderful attributes of the classic “gentleman’s yacht” which should be a great attraction to the more discerning yacht owner.