The Navetta 28 is from the Ferretti Group’s Custom Line’s semi-displacement series, and is the outcome of the cooperation between the Group’s Research and Development AYT&D department and the in-house Centro Stile team, together with Studio Zuccon International Project. She takes several innovative solutions from her ‘sister’, the line’s flagship Navetta 33 Crescendo, as well as featuring several new elements such as the Dual Mode Transom system - a Ferretti Group patent that completely redesigns the aft outer area - unprecedented glazed surfaces in the hull, and a best-in-class infotainment system. 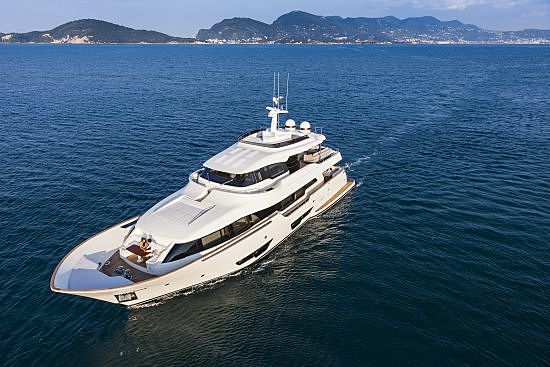 Speaking of the project, Studio Zuccon comment, “For our Studio the Navetta 28 represents simultaneously a moment of huge satisfaction and great designing commitment. Though it has been a difficult project due to the overall ambitious objectives initially set, we are really pleased with the final result that fully embody the idea of design as we believe it, meaning the ability to draw together past, present and future, or, as it is usually said, to balance tradition and innovation.”

On board she accommodates guests over six luxurious cabins, three double and one twin, as well as two VIP cabins located aft. All cabins are notable for their abundance of natural light offered from windows providing magnificent panoramic views. 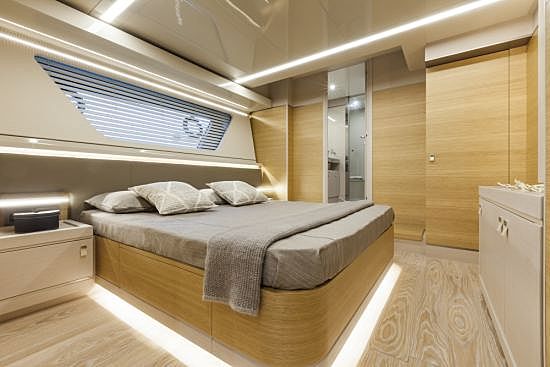 In fact, natural light is the dominating element throughout the yacht’s interiors: on the main deck, a continuous glazing stretches from bow to stern, widening amidships, while a series of innovative, extraordinarily large at 1.4 square metres each, stanchion-free hull windows have been installed for the first time on this model at the height of the four guest cabins, and feature an original design thanks to two ‘invisible’ portholes that are glued on the glass itself instead of being anchored to a fibreglass frame. Designed by AYT&D in cooperation with the Italian company Amaregroup, these unique windows have passed a series of tests performed by RINA (Italian Naval Registry) to obtain the Type Approval certificate. 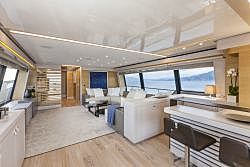 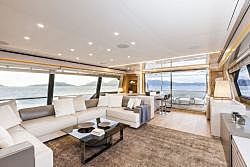 The owner has the opportunity on board the Navetta 28 to truly make the yacht his own, with the brand offering extensive customisation. An example of such inside is found on the main deck to starboard where, upon request, a bar area with two seats can be arranged, fitted with a sink, an icemaker and a bottle-rack/refrigerator - an optional solution aimed at letting the cockpit and the salon 'interact' even more with one another.

Walking further, a central U-shaped sofa can be found in this area, facing a low cabinet and an armchair. The concealing TV screen, available in sizes from 46 to 55 inches, has been installed in the ceiling. The salon, like all the other interior areas, is lit up by LED built-in lights in lacquered wood planks. But on this first hull LED light strips have been fitted

along the entire salon length. To the left, a front wall with horizontal slats separates the living area from the central lobby, from which a staircase leads both to the guest cabins and to the upper deck. Interior fittings are completed by a full-height storage cabinet for glassware. Starboard, the galley can be accessed, equipped with all necessary household appliances and a large side-by-side refrigerator, as well as a dinette area. Entrance to the galley can also be gained from the starboard outer walkway and from the crew cabins below deck. 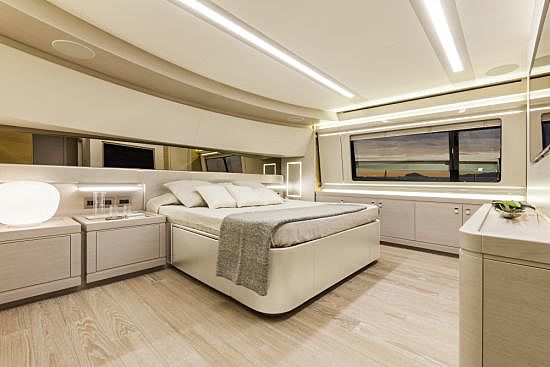 Continuing to the interior of the lower deck, going down the stairs from the main deck, a central lobby with a mirroring wall and a wide storage cabinet is reached, leading to the four guest cabins. All cabins are fitted with top-of the-range furniture and furnishings for a maxi yacht of this size: indeed, every cabin, flooded with light. 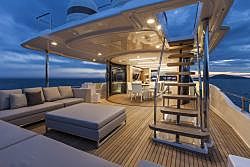 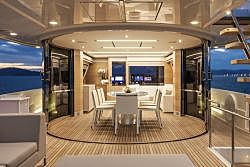 Among many details combining aesthetic features and functional solutions on board is the circular sliding glazed door system in the panoramic dining area, located on the upper deck. This ensures flexible use of this area, allowing it to be closed towards the stern and connected to the salon or opened towards the outdoor areas. The wide sun-deck is a comfortable private deck for the owner and his guests, which upon request can be fitted with a Jacuzzi and an awning. 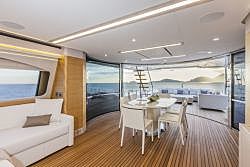 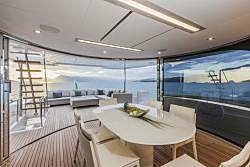 The upper deck can be accessed in two different ways: either via a teak-lined staircase leading from the main cockpit to the outer panoramic lounge area, fitted with free standing sofas and a coffee table, or via the inside stairs coming from the lobby on the main deck. 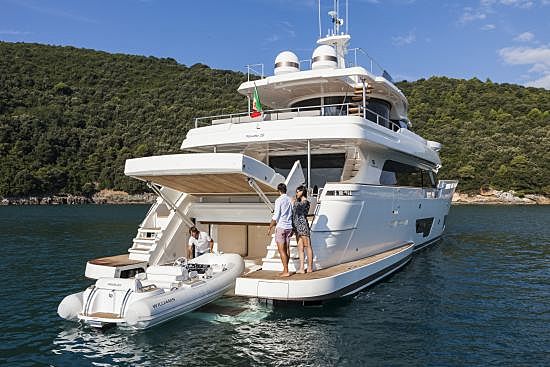 Moving on to the cockpit, access from the bathing platform is guaranteed by a double staircase carved into the stern, with an additional electro-hydraulic gangway port side. This area features a wide and original multi-function sunbathing area including three pads with adjustable backrests. 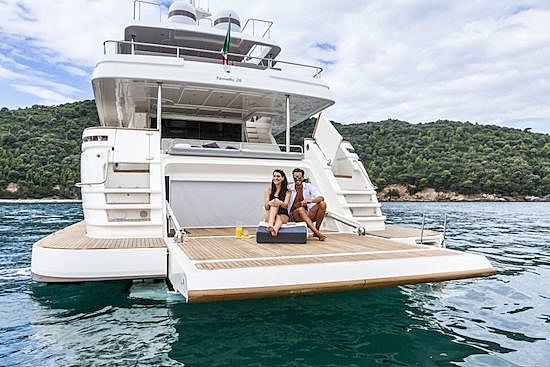 In regards to the revolutionary electro-hydraulic system on board, the system provides huge advantages in terms of convenience, safety, and comfort, perfectly blending into one single system a floodable garage, a bathing platform, and a beach club of unparalleled dimensions on any other models. The system allows to open the hatch both upwards and downwards, thanks to one single pair of pistons, combining together three different functions and maximising the use of this area. When the hatch is opened upwards, access is gained to the wide floodable garage, which can store a jet tender up to 4.45 meters long; the latter can be easily launched or hauled by means of a few safe procedures without using a davit, but simply lowering the central part of the platform into the water, so that the tender can float inside the garage. The central submersible platform can also become a comfortable surface from which to dive into the sea or get back on board, but it can also be used as a lift for water toys and other equipment. 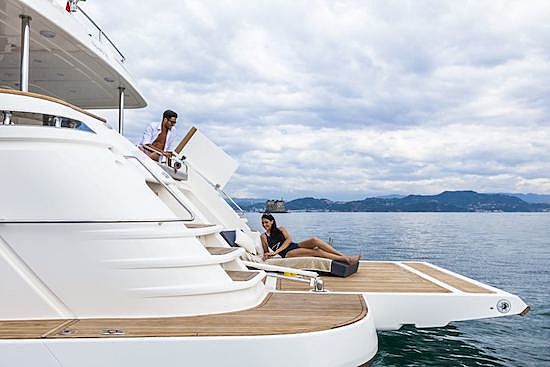 When the hatch is opened downwards - even with the tender inside the garage - an approximately 9 square metre beach area is obtained, since the hatch, completely open, turns into a horizontal platform flush with the two side areas of the aft bathing platform. To this purpose, the inside wall of the hatch has been lined in teak. A second teak sliding platform fitted on the ceiling of the garage may also be lowered to the level of the door to cover a large part of the garage, thereby further extending the beach area by an additional 6 meters, reaching a total area of almost 15 square metres. 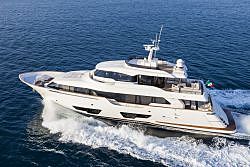 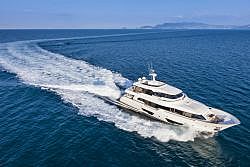 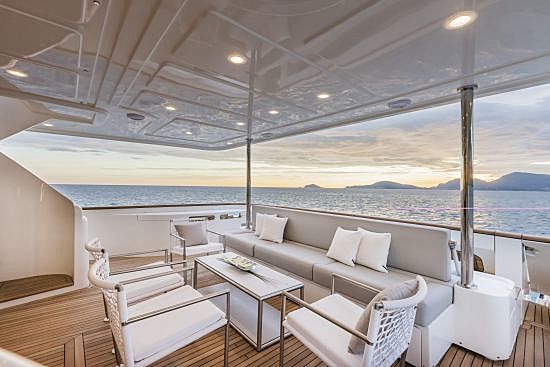 Built at the Ferretti Group’s shipyard in Mondolfo, Italy, the second Navetta 28 has been launched recently. The yacht is the second in the series, making her debut at the last Cannes, Monaco and Genoa boat shows. She has a warm metal grey coloured hull chosen by her owner, and an interior designed by Dutch designer Eric Kuster, who worked in close cooperation with Centro Stile Ferretti Group and Studio Zuccon International Project. 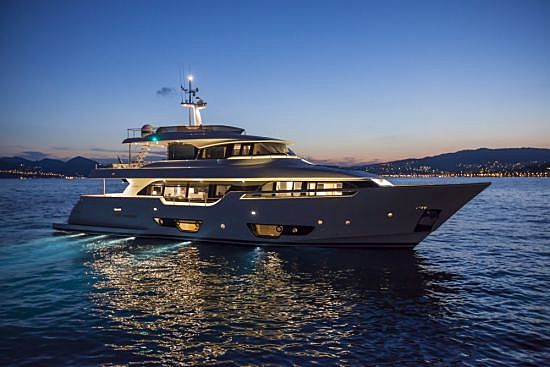 Zuccon International Project concludes that the Navetta 28 is, “A much more sophisticated functionality, supported by state-of-the-art technology; the possibility to customise furniture and internal decorations, essential to face the requirements for a more contemporary yet formal language, that could respect and evolves the traditional vessel’s range style: those are all the elements that contributes in making the Navetta 28 a true example of design.”