Home > News > SuperYacht of the week: Elena – A Legend Returns

Just 16 days and 21 hours after leaving the safe harbor of New York, the 137-foot Superyacht Elena entered the 1928 history books by participating in the 3.411 miles King's Cup Trans-Atlantic Race for the King’s Cup from New York to Santander. Rebuilt in 2009 by Factoria Naval de Marin, the racing schooner Elena will once again make history. 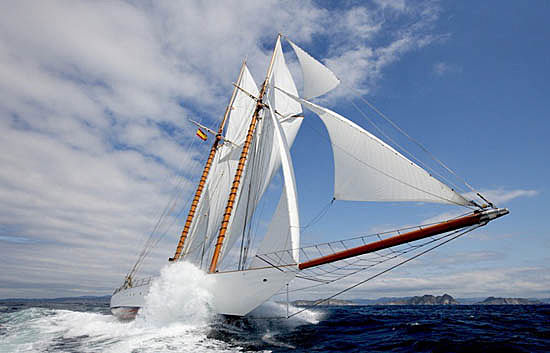 To resurrect this maritime legend, today's engineers and designers not only had hundreds of hand-drawn plans donated by the Massachusetts Institute of Technology (MIT) in Boston, MA. but were also provided with the resources of Herreshoff Design Office located in Bristol, RI which is overseen by Halsey Herreshoff, the grandson of Nathaniel Greene Herreshoff ’s. 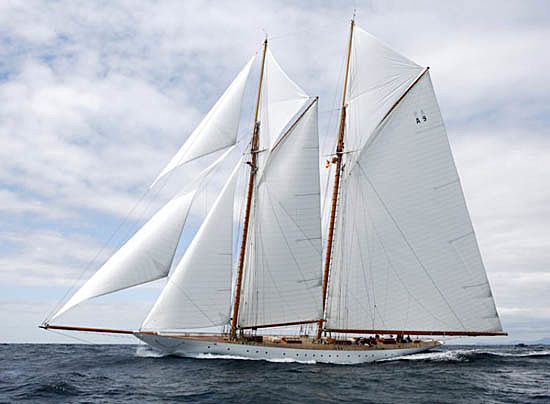 In addition to the information provided by MIT and the Herreshoff Design Office, historic images of Elena were painstakingly studied to ensure that every detail was replicated to near perfection. These details include her towering wooden masts and sail plan identical in dimensions to the original. Her beautiful classic styled interior will be like a journey back in time. 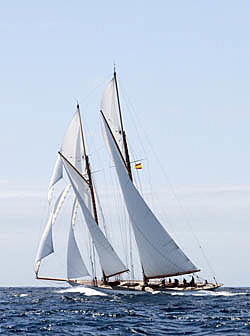 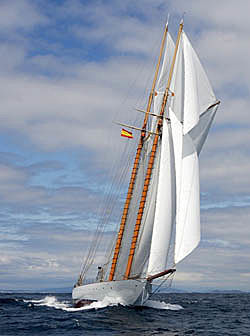 History
In the fall of 1910 Morton Plant placed an order with the Herreshoff Construction Company for a new yacht. Plant’s design request was simple, “Build me a schooner that can win!” and so the choice was made to copy, and where possible, improve upon the design of the S/Y Westward that Herreshoff had built the year before. The Westward was another benchmark yacht that swept the field at every race she took part in her first year racing and, with continued success, became one of the most famous and successful racing schooners of all time. 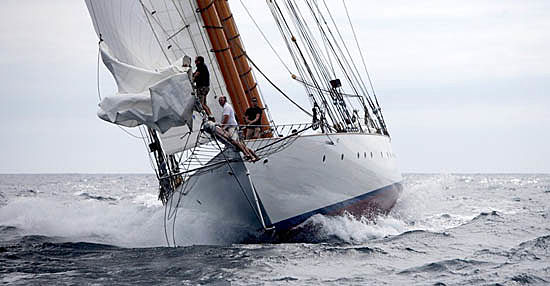 The Superyacht Elena was launched the following season (1911) and soon thereafter both yachts were going head-to-head in racing up and down the blustery Eastern Coast of the United States. Like her sister the year before, Elena immediately began winning the majority of her races against the best of the American schooner fleet, several of which included competing against the Westward.

After a successful 17 year racing season and cruising in American waters with distinguished owners such as Cornelius Vanderbilt and William B. Bell, it wasn't until 1928 when Elena’s greatest moment of glory came during the King's Cup Trans-Atlantic Race from New York to Santander, Spain. Elena won the race outright. 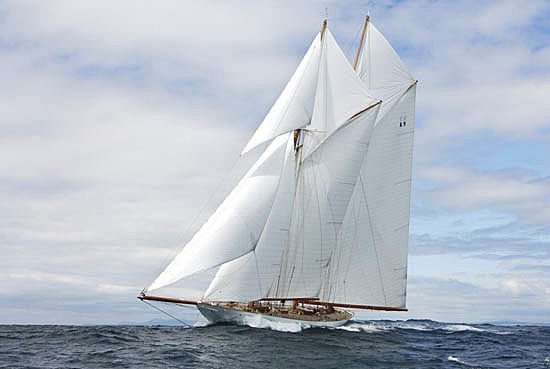 Now, in 2009, history has repeated itself, when today's designers and engineers were presented with the challenge of building a new classic schooner. The team, now responsible for the Superyacht Elena Project, looked no further than their own experiences with the Superyacht Eleonora, built and launched by Ed Kastelein in 2002. In 2005 and 2006 Eleonora, the extremely faithful replica of Westward, raced very successfully in the classic circuit. And as the Westwind before her, Eleonora made her presence almost immediately and served as the driving inspiration for Elena Project.

Future
After a tune-up period, this superyacht will make her debut at the Antigua Classics in April 2010 and then sail back across the Atlantic to participate in the regattas in Italy and France and a full charter season in the Mediterranean. 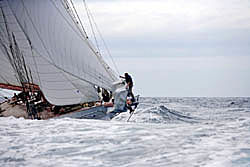 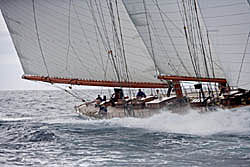 Elena promises to be an exceptional addition to the classic fleet where, true to her pedigree, she will be raced hard against her historic rivals at the many classic regattas such as the Antigua Classics, Monaco Classic Week and Les Voiles de Saint Tropez. In between these events she will be available for charter in the world’s most exotic locations ranging from the Caribbean, the British Isles, the Baltic to the Mediterranean Sea.

Life on board Elena
Driven by her nearly 1.200 square meters of gleaming white sails, Elena will be an impressive sight as she leads the way around the course at the many classic regatta’s she will compete in. True to her racing schooner pedigree, this superyacht promises both beauty and grace under sail as well as uncompromising, blistering speed. Sailing on board a classic gaff schooner is a unique experience for an elite group of people. 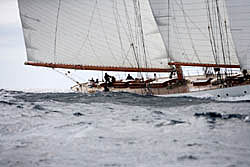 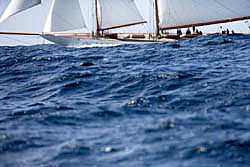 Although designed in 1910, the resurrected Elena is perfectly suited for her dual role as a grand prix racer and a modern luxury charter yacht. Her wide, clear teak decks designed to facilitate easy sail handling are equally suitable for carefree lounging for charter guests while resting in one of the many secluded anchorages her experienced crew will find for you.

While seated at her beautiful handcrafted teak table, you can enjoy al fresco dining on deck while taking in an exquisite sunset cruise or simply the view of the Nelson’s Dockyard in Antigua or Saint Tropez. Down below guests can relax in privacy in the cool comfort of their luxuriously fitted, fully air-conditioned cabins. Enjoy music or a movie on the state-of-the-art audio/video systems in their cabins or be entertained in the main saloon. Elena’s eight permanent crew will be standing by to ensure your pleasure and comfort giving you an unforgettable experience of a lifetime.

Elena’s Rig
Elena’s original rigging plan, as drawn by Herreshoff in 1911, has been tested through a purpose-made computer program, for Brasker masts and spars. Surprisingly the results confirmed that despite nearly 100 years of developments in rigging design the Wizard of Bristol’s original concept could not be improved upon in both strength and lightness. After calculating hundreds of situations in every conceivable weather circumstance and applying those circumstances to every possible sail combination, the modeling results could only substantiate but not improve on his calculations. Therefore all the spars will be built to Herreshoff ’s original specifications. 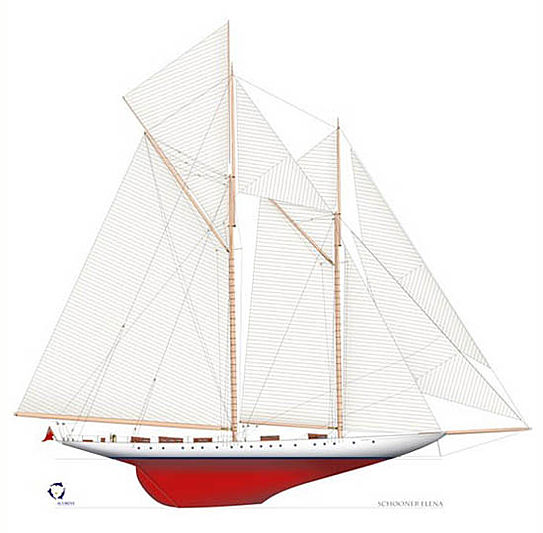 Elena’s lower spars and booms will be constructed of carefully selected Oregon Pine. Her upper masts, gaff ’s, jackyards and spinnaker boom will be constructed of the finest quality Alaskan Sitka Spruce. New to Elena will be the booms that will be constructed of 16 staves instead of the more customary eight, giving a much stiffer and lighter boom despite thinner wall thicknesses. Given today's modern technology to improve upon past designs, Herreshoff ’s original design specifications truly stand the test of time.

Accommodation
The accommodation of Elena is designed specifically to assure maximum comfort and privacy for her guests as well as a high level of efficiency for her permanent crew. The layout is true to the style of Herreshoff ’s original drawings and only has been tailored slightly to meet the standards and technological breakthroughs of a luxury charter yacht of the 21st century. 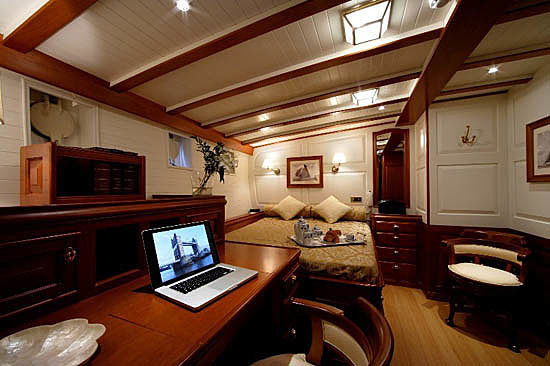 Elena offers spacious accommodation for up to 10 guests in 3 double and 2 twin cabins. All guest cabins are exquisitely finished with raised and fielded classic mahogany paneling and all interior ornamental details meticulously following the original Herreshoff drawings. The beautiful varnished mahogany panels are accentuated by white painted ceilings and ceiling beams. 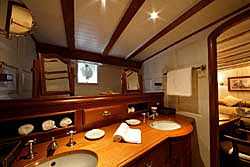 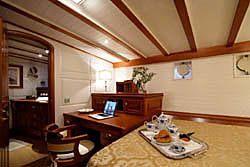 The en-suite bathrooms have separate showers and toilets and are finished with elegant, period correct fittings. There is ample hanging and cupboard space and an abundance of natural light through the overhead skylights as well as three portholes to every cabin and four in the owner’s cabin.

On the port side at the foot of the main companionway there is the owner’s stateroom with a double berth, an office sized desk, separate seating for 2 and an extra large bathroom. 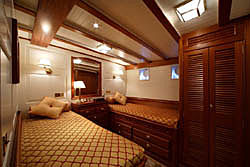 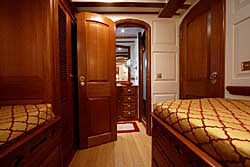 Naturally each cabin has its own privately controlled air conditioning system as well as a CD player with invisible speakers hidden in the paneling and a television. Though these comforts were identified on original drawings, we believe that Herreshoff would approve. 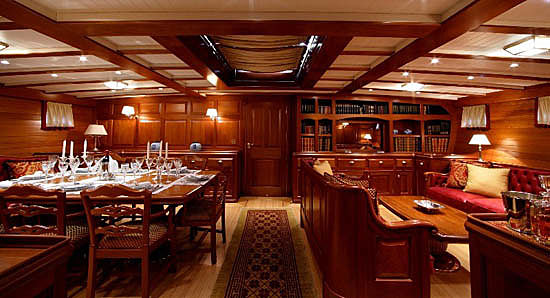 The full width saloon offers a spacious dining area to port with fixed seating for 10 guests and a lounge area to starboard with comfortable settee’s, table, bookshelves and a large television as well as a CD/DVD system. 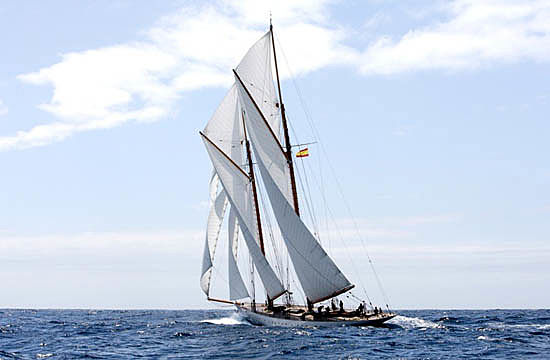 Aft and just forward of the steering position, with its own private access from deck, is the captain’s cabin adjoining the state-of-the-art navigation and communication center. This is appropriately located immediately below the companionway to facilitate direct contact between the navigator and helmsman during racing or cruising.

The captain’s cabin has its own en suite shower and toilet while there is also a day head and shower for crew use during sailing or racing. On the port side is a small, single cabin that can be used by the captain if the charter party requires a 5th cabin.

Four cabins with a total of eight berths each with their own shower and heads. Spacious crew mess with television, CD/DVD system, separate crew companionway to deck and access to the storage area with large freezers and food storage, washing machine, driers and the engine room.

From start to finish the project was managed by Captain Steve McLaren.