Few superyachts get the spotlight shone onto their lavish and sometimes bizarre interior spaces as what they might deserve. Too often it is the 10-metre limo tenders or the cascading sundeck Jacuzzi which take centre stage in these features. One look at Feadship’s 44.2 metre Moon Sand and you will understand why we have changed the angle of approach for our latest Superyacht of the Week. Join us as we dive into the intricate and multi layered interior guest spaces that make up this Dutch built superyacht created by renowned British studio Bannenberg & Rowell Design. 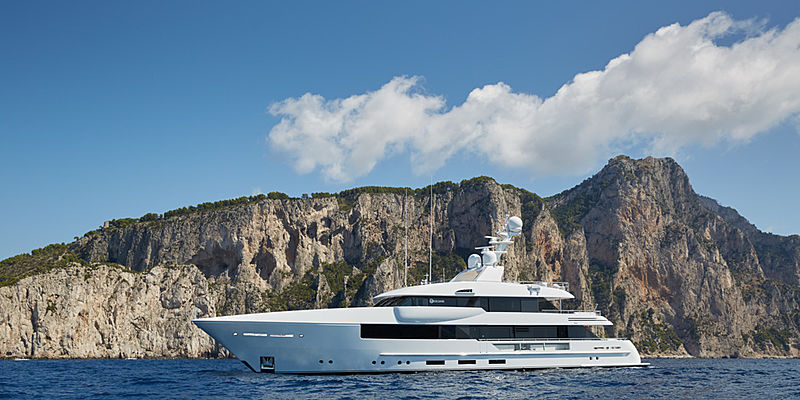 Developed by De Voogt Naval Architects, Moon Sand was launched in April last year at Feadship’s facility in Makkum. By the time the Monaco Yacht Show arrived in September she was in perfect shape to be presented to the yachting world and was also when SYT stepped on board to find out what makes her so special for ourselves. We discovered a tastefully styled home-away-from-home atmosphere on board with playful touches abound to make one feel comfortable within the first moments. Although guest movements between the indoor and outdoor spaces flows seamlessly, distinctively colourful and lively elements that characterises the interior create a visual barrier between Moon Sand’s timeless exterior appearance in contrast to Bannenberg & Rowell’s elaborate and creative spaces inside. 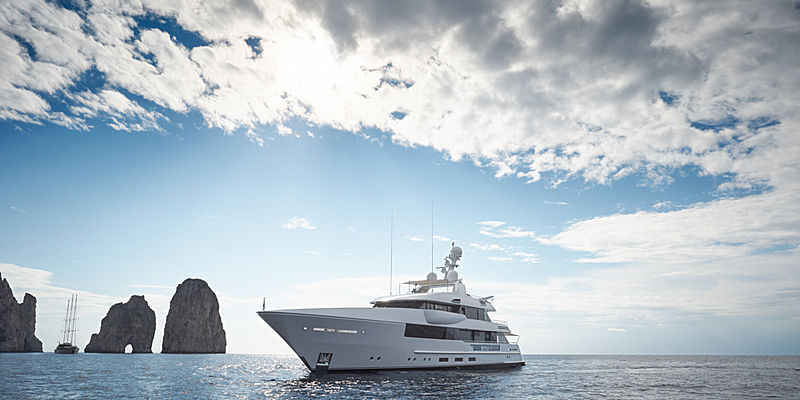 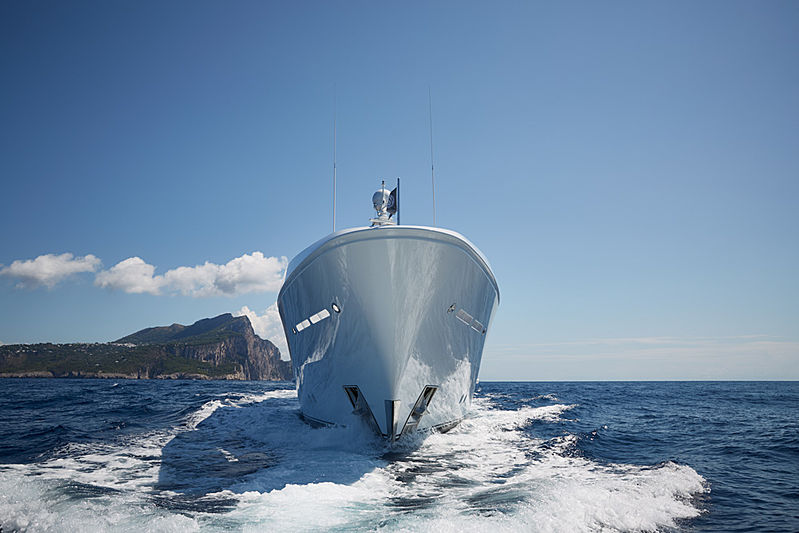 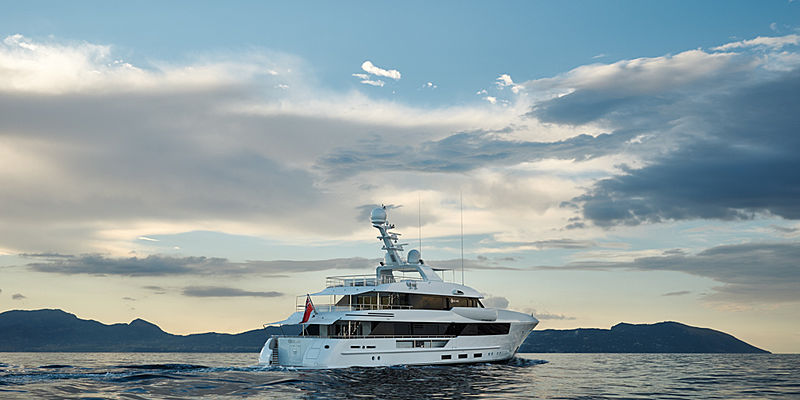 Amongst her stand-out characteristics on deck are her expansive aft-facing areas and ample loose seating on both the main and bridge decks. On the latter, the stairs have been moved as far to starboard as possible in order to maximise space. 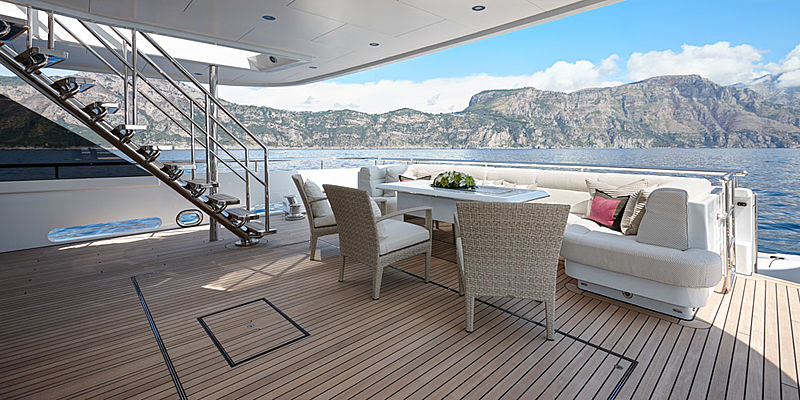 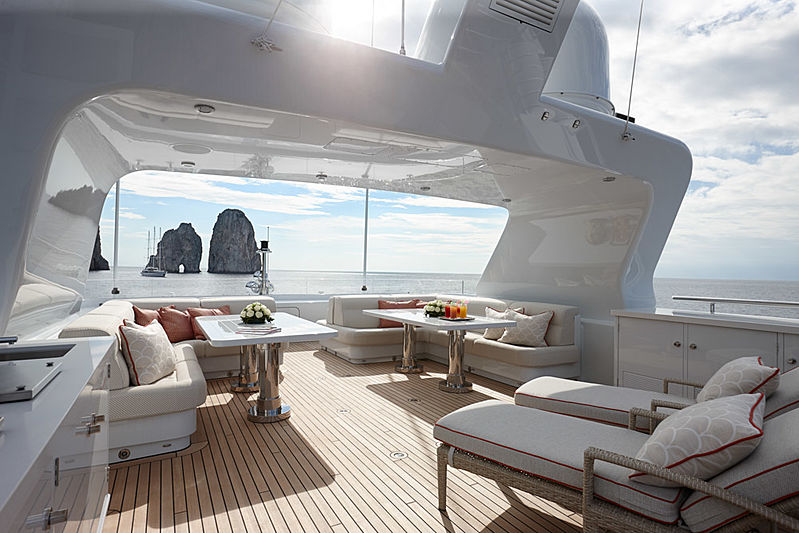 A 6.2 metre tender is stored on the sundeck to accommodate for the large swimming pool on the main deck aft and its water-holding facility below. An ingenious lifting floor system whereby a section of the deck lowers down to provide the pool depth required must be one of the most innovative features on board. 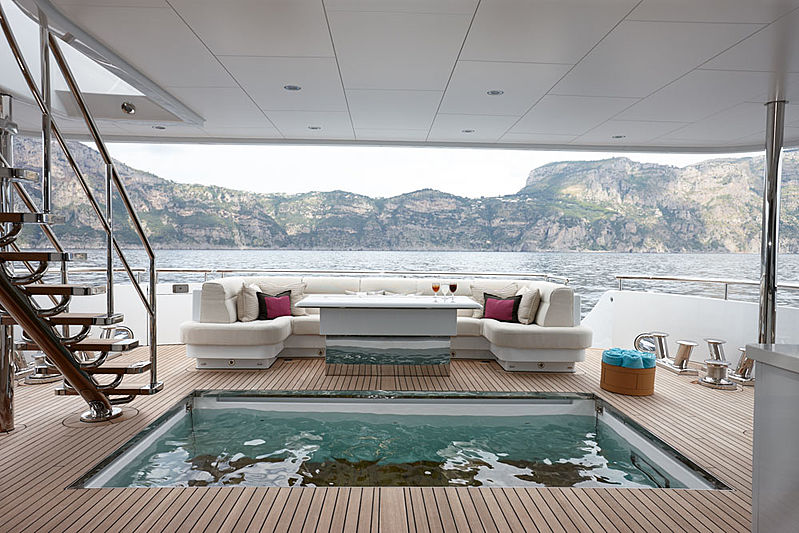 Once inside, a first-notice feature are the large windows found on the bridge deck lounge, main lounge, dining area, study/lobby and forward owner’s stateroom. These spaces are characterised by an abundance of natural light allowing one to pick up the detailed level of each textured surface used to decorate the themed guest areas. These are magnified further on the main deck by having a large section of clear glass inset into the bulwark amidships. 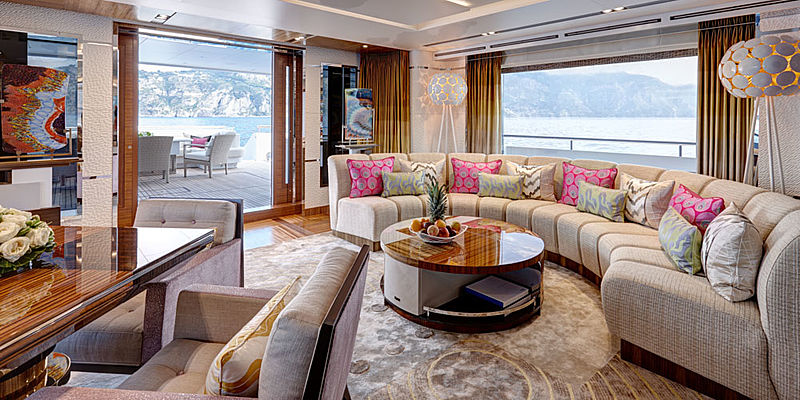 This space has been divided into separate social areas before leading through to the dinning area forward.

Moving forward from the main dining area is a corridor to starboard that leads one to the master suite placed forward on the main deck. This space consists of a private study, double en suite bathroom and large dressing area. A custom four poster bed along with a range of mystical wonderland of colours adds a sense of sophisticated playfulness to the suite. 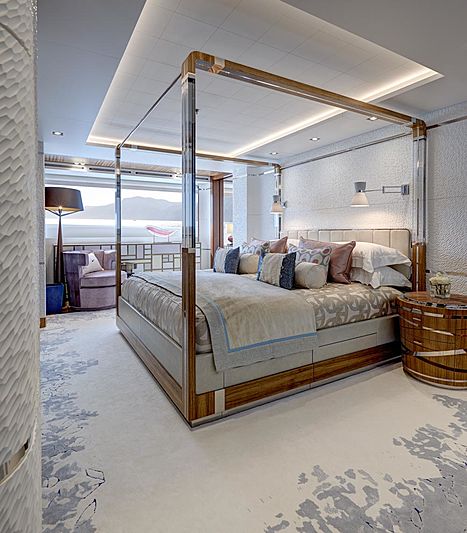 The six remaining guests are accommodated below deck in three guest staterooms. Two of these are easily convertible into one large stateroom with separate seating - and one large full beam VIP stateroom located forward. It is a rarity to experience so many different emotional and sensory moments as one does while walking through these guest accommodations. Each cabin is uniquely decorated in both colours and textures and adds to the solitude of your own private cabin when retiring for the night. 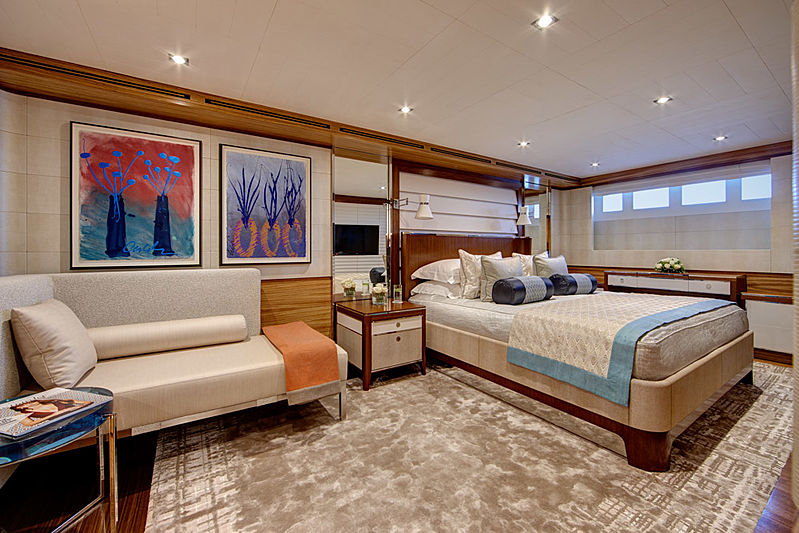 The grand skylounge takes up the full beam of this deck with near fully-opening sliding doors creating an even greater sense of space allowing Bannenberg & Rowell to style this space with the use of darker woods and rich blue materials. A large central portion of the deckhead is raised and textured with backlit lighting creating a soothing affect at night time. 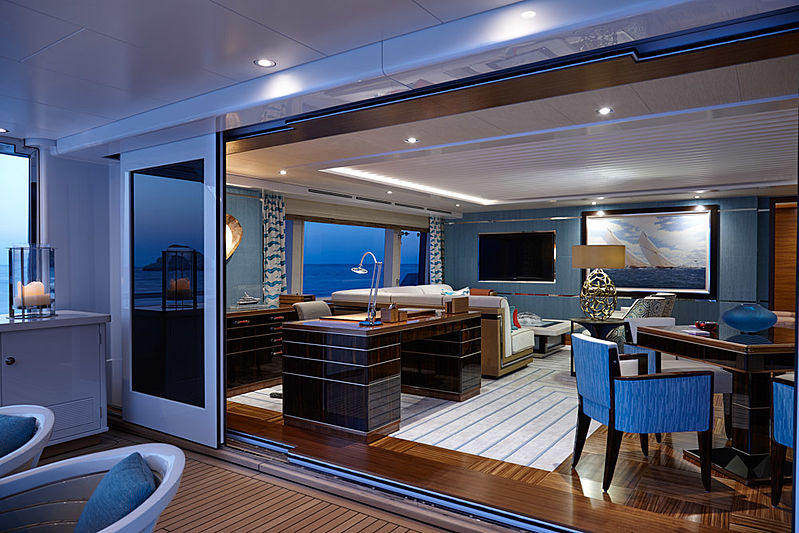 The skylounge leads out through the oversized sliding doors onto the bridge deck aft where guests can enjoy their breakfast with near uninterrupted views from the this uncluttered and simplistic area. A comfortable U-shaped seating area makes for a more informal meeting area ideal for chilling out while underway. 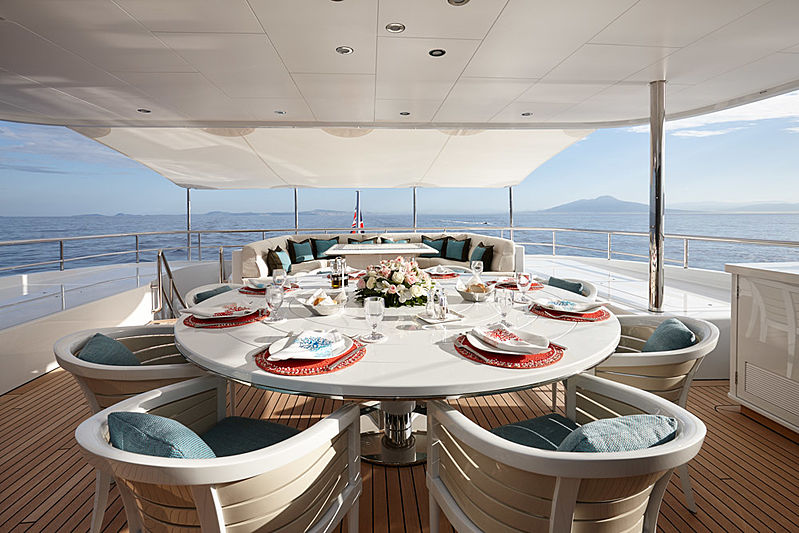 Based on a sturdy displacement hull developed by De Voogt, Moon Sand is able to reach 3,600 nm while maintaining a speed of 10 knots. 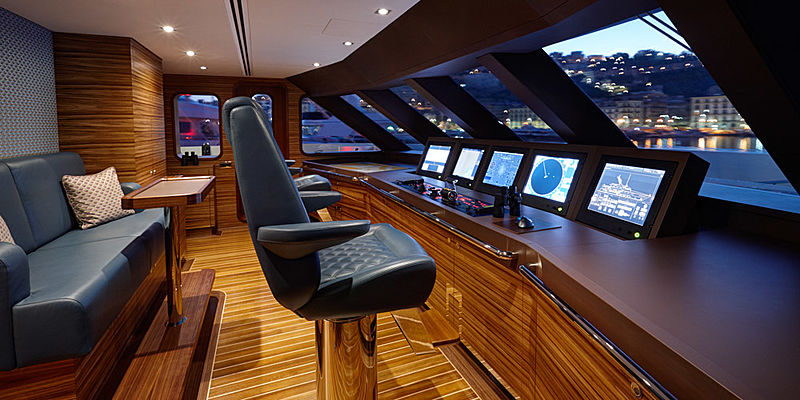 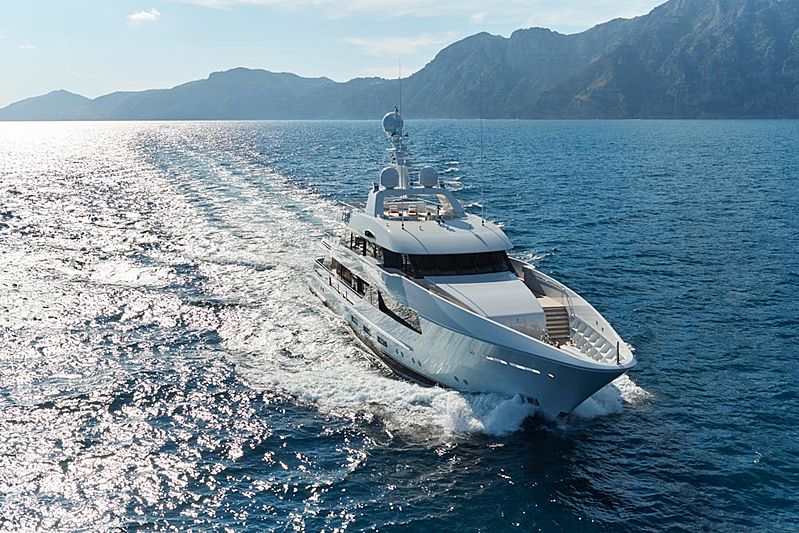