Home > News > SuperYacht of the week: Hortense, for a life of exploration and discovery

JFA, Joubert Nivelt Goeffers and Rhoades Young have recently completed a new 27.5m motor-sailer intended for a life of exploration and discovery. Hortense has been designed specifically for extended periods at sea, and is expected to spend much of her time in remote southern hemisphere locations, where self-sufficiency is going to be key, it has been equipped with high capacity tanks and large freezers and long term food storage. Using sail and motor efficiently it should be able to cover long distances to isolated locations. 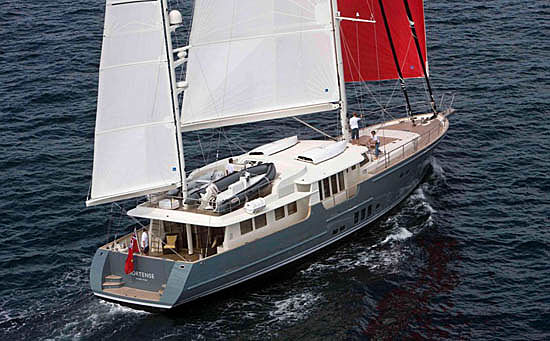 The owner chose Joubert Nivelt Goeffers to realise the design, initial sketches, naval architecture and structural calculations. For the general arrangement, interior design, decoration and external details, he contracted Rhoades Young. With JFA, in charge of the shipbuilding, as well as the design of the technical systems and spaces. 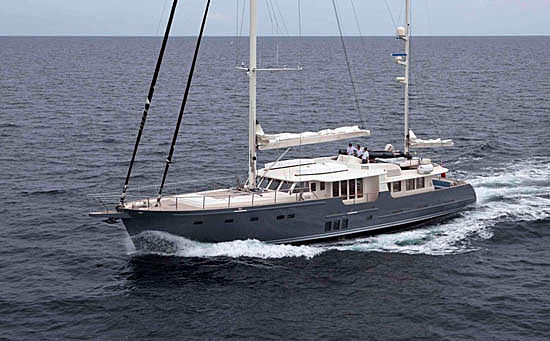 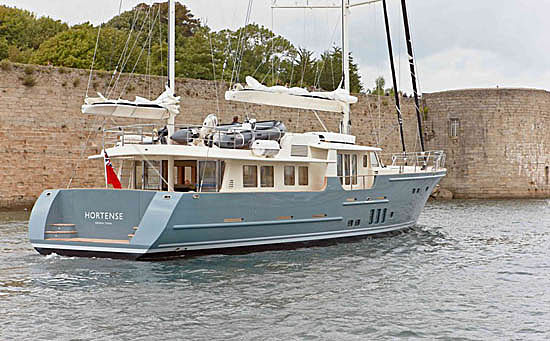 The yacht has a relatively high freeboard and carries her beam proportions well aft, which left Rhoades Young with the scope to design a large and un-cluttered interior 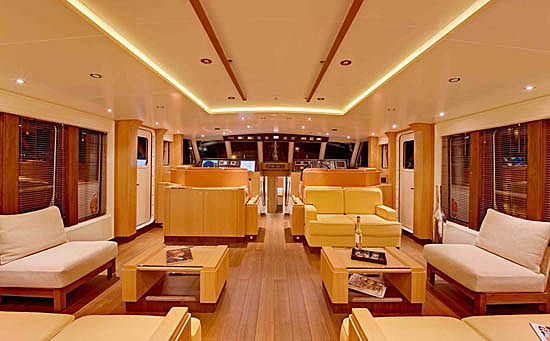 As the planned use for the yacht was not intended to be the typical Caribbean/ Mediterranean bimini covered cockpit experience, the interior spaces were designed for comfortable living at sea whilst affording excellent views out in potentially uncomfortable climates. With initial voyages planned to Latin America, it should be possible to maximise the experience of these environments whilst aboard through the large openings. 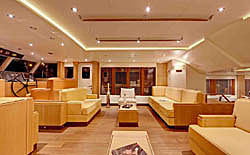 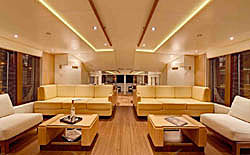 The large saloon/lounge and pilothouse area are interlinked and separated by a small change in level. The upper saloon has floor to ceiling windows, which from the seating area give expansive views of the spectacular scenery, which are expected to be a major part of the life of this yacht. The navigation and helm area are designed as comfortable seating areas in themselves where adventures can be planned and trips can be enjoyed. 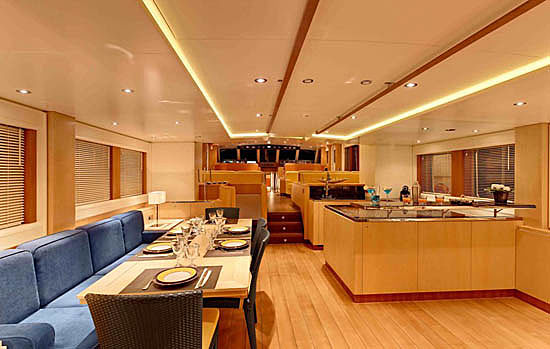 The lower saloon is a modern interpretation of the farmhouse kitchen with a large dining table and cooking space combined, creating a lively social area for eating and entertaining. The eating area and adjacent bar open out onto the rear deck through a sliding glass screen where teak finishes and furniture detailing continue either side of the glass to blur the transition from inside to outside. A full galley is provided below deck as back up.

The owner’s full beam width cabin is accessed from the lower saloon. The large format windows to port and starboard will allow wonderful views out creating a great sense of space.

Three en-suite guest cabins; two twins and one full width double cabin can be found in the bow section of the yacht. A twin berth crew cabin is located aft port side, near the galley and the engine room. 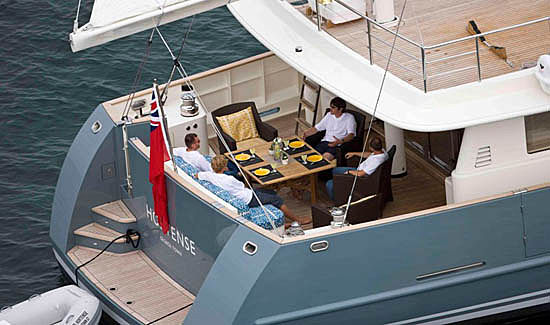 The unique solution to the exterior concept has been further developed by Rhoades Young with attention paid to breaking up apparently large volumes with thoughtful detailing. Eyelines were also thoroughly checked and optimised to allow the boat to function well in less clement climates and allow guests and crew to see out all round.

The boat has an aft deck bench in front of which a table and armchairs can be added to enjoy being outside. This recreation area continues down to the stern platform on each side accessible via bulwark doors. The zone is ideal either for bathing or for climbing aboard either of the 5.5m or 3.4m tenders intended for exploration. These tenders, installed on the fly bridge are launched with a crane and once in the water, they entirely free up the fly bridge, thus creating an additional recreational area. The fly bridge is fitted with the steering stations and hydraulic controls used for sailing. Furthermore, two 12 foot dinghies are installed on the superstructure roof. The forward deck, open and clear, is fitted with numerous storage lockers. 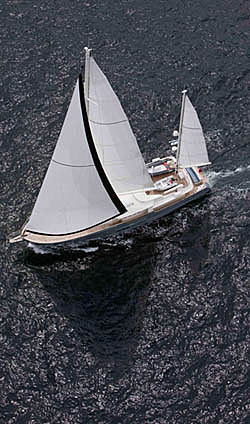 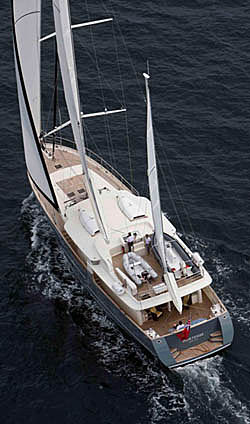 With 33m air draft, the ketch type rig is made of carbon and holds up a 380m² of sail area up wind and 570m² down wind, thanks to the asymmetrical spinnaker and its socks, which allow easy manoeuvring with a limited crew.

Hortense’s propulsion is provided by two 285hp engines allowing the yacht to reach 11 knots cruising speed with ease. Electricity is produced by 2 genset of 27kW but it is also possible to use the boat using battery bank for silent running. Self sufficiency is high thanks to the 16 000 L fuel tanks installed in the boat. 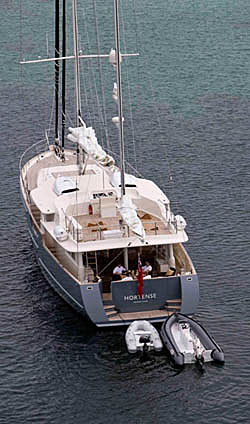 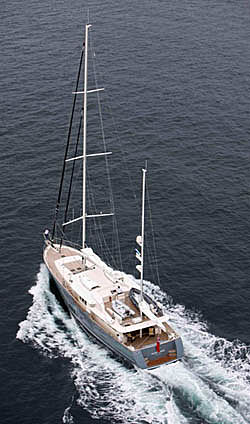 On close consideration of the fairly ‘utilitarian’ design brief - reliability, strength and volume were primary objectives for the yacht. The temptation to over specify the amount of technical and electronic wizardry on board has been purposefully quashed, in the name of reliability and self-sufficiency. 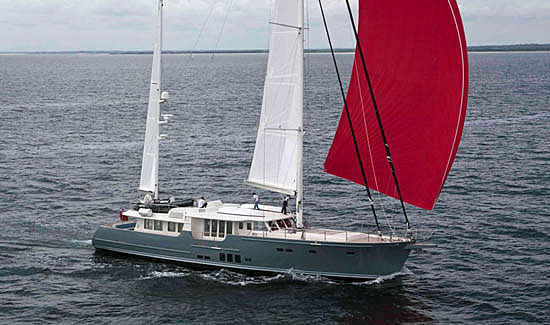 Special care has been given to the sound and thermal insulation. JFA and Van Capellen Consultancy have worked once again together in order to get low sound levels. There is a real sense of silence onboard with 55dB at cruising speed, and 40dB at anchorage with genset and air conditioning running, measured in the owner’s cabin.

Whether sailing for pleasure or motoring at 11 knots, comfort and silence are actually realised. But the fulfilment of this yachts concept is in using the engine with the help of the sails, thus reducing by up to 30% the fuel consumption of the boat at comparable speeds, depending on sea and wind conditions, this being especially valuable in terms of independence and cost efficiency.