Launched by Italian shipyard, ISA Yachts, earlier this year, the 43.63 metre superyacht Silver Wind is the shipyard’s inaugural ISA 140’. The first yacht to be constructed with the combination of water jets and hybrid propulsion as well as one of the first yachts using variable rpm generators, her defining features include very high performance coupled with low consumption. 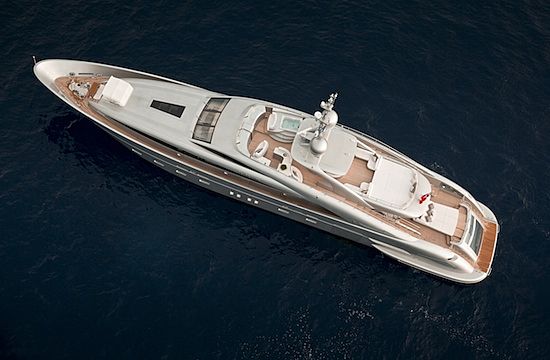 The vessel is a planing composite superyacht with exterior designs by Andrea Vallicelli and interiors by Valentina Zannier in collaboration with Nuvolari & Lenard. She balances light indoor areas with spacious outdoor deck spaces, creating an open environment with an emphasis upon spectacular, panoramic views while ensuring privacy for the guests on board.. 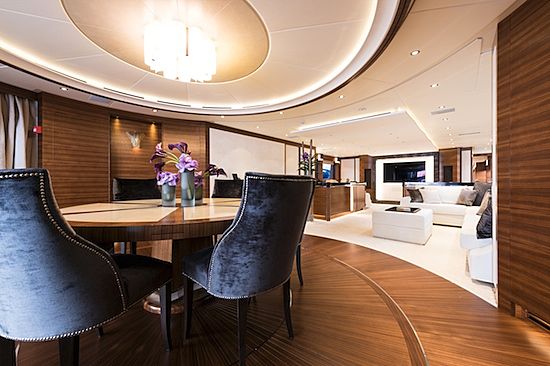 In terms of her interior design, she has a classic yet contemporary feel, with subtle colour schemes which are both sophisticated and welcoming. A combination of timbers have been used such as walnut, high gloss ebony, satin rosewood and bleached walnut. An eye catching feature is how the main materials are mixed, with woods and precious stones like onyx and marbles blended with special decorative elements such as an artglass cascade, mother of pearls trimming and carved metal panels. 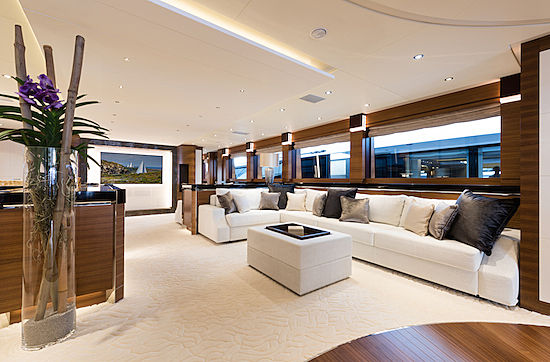 Armani Casa and Hermes upholstery contribute to an early 20th century French style, as well as the metal straw marquetry which accompanies the other sophisticated finishes in the main deck. The large salon has different areas where guests can enjoy relaxing, lounging or entertainment. The dining area boasts a custom designed table with a chandelier hanging above and providing an ideal environment for fine dining. Lighting features and loose pieces have been furnished by brands such as Fendi, with the beautiful art light of Charles Paris. 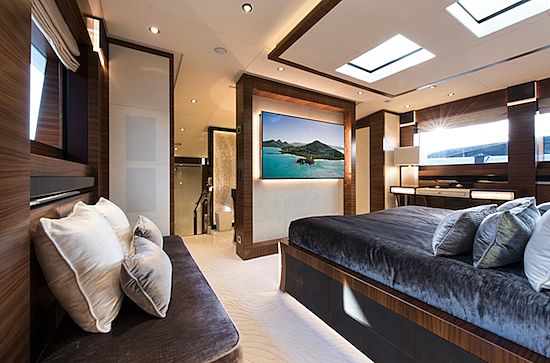 Up to eight guests can be accommodated in total over a four cabin layout. The owner’s apartment is located on the main deck. Featuring an exquisite private bathroom, several striking materials have been used in the design, including ivory onyx and arco iris onyx. 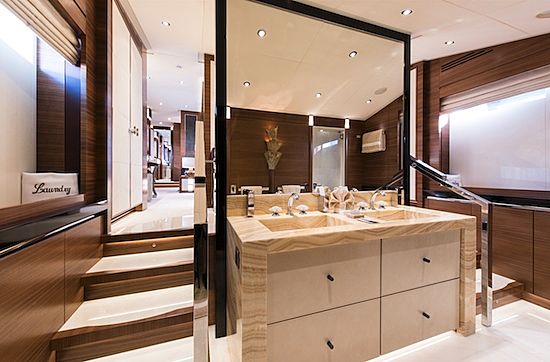 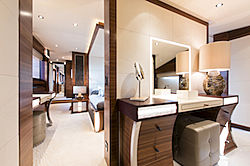 Other materials used throughout the interior of Silver Wind include zul macauba, rosa Portugal and cipollino Greco. Throughout both owners apartment and the guest areas are handmade custom mosaic pieces designed by the Italian company, Sicis. 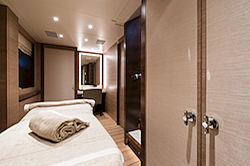 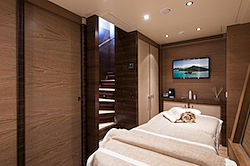 Her exterior design carries a bold and dramatic feel from the exterior through into the interior spaces. Strong diagonal lines run from the sundeck to the stern, mirroring the flair of the distinctive sweeping staircases. Her extensive outdoor spaces include a huge sundeck and a cosy beach area with a generous swimming platform. Comfort at anchor is guaranteed by fixed fin stabilisers with electric actuators. 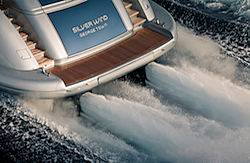 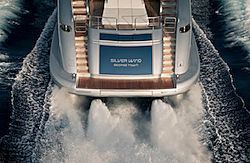 She has a hybrid propulsion system by Siemens and ISA Yachts. Powered by 2 x MTU 16V4000M93L 3440 KW @ 2100 rpm engines, she has a maximum speed of 32 knots and a cruising speed of 26 knots with a traditional propulsion system consisting of two marine diesel engines driving two Rolls-Royce Kamewa waterjets through reduction gear-boxes. The two diesel generators also supply power to the electric users and can work at variable speed, therefore minimising fuel consumption, the noise, the emissions and the maintenance needs. At electric mode, the total fuel consumption is 90 l/h for a range of 2600 nm. 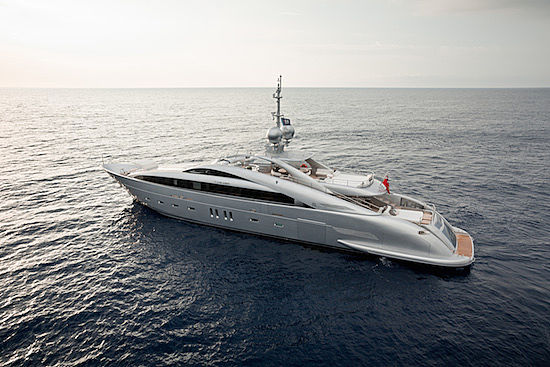 There are numerous advantages to the hybrid propulsion system, starting with the large flexibility of operation modes. Dependent upon the operation mode of the vessel, the main engines and generators run less hours per year and, when in operation, at higher loads, both of which lead to less required maintenance cost. What is more, the main and auxiliary diesel engines can always operate at its peak efficiency, thus reducing the specific fuel consumption and gas emission. This shall also result in a drastically lower noise level in overall yacht ambient. Last but not least, if the generator set fails, two shaft generators will operate the electric users; if the main engines fail, the two generators can power the propellers. 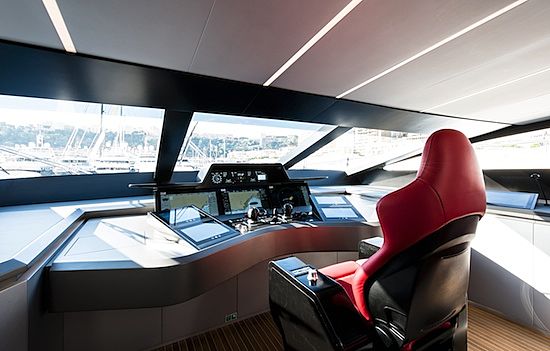 The custom I-Bridge is also a special feature of Silver Wind. The TEAM Italia I-Bridge® wheelhouse integrated with TRANSAS is control system designed to create a dialogue between the two technologies at the highest of their functionalities. Five monitors 24" Touch-Screen HD, one 28’’ Stretch and four 13" MMD HBB one of which dedicated to manage the Rolls-Royce Kamewa engine system, make the console incomparable both for the lay-out and above all for the functionalities offered. TEAM Italia has also engineered and configured the fly-bridge in order to allow the complete efficiency and the management of all sensors and the subsystems already in the main bridge. The final result is a highly technological and pioneering I-Bridge, second to none in terms of customisation and integration, always in full compliance with safety regulation. 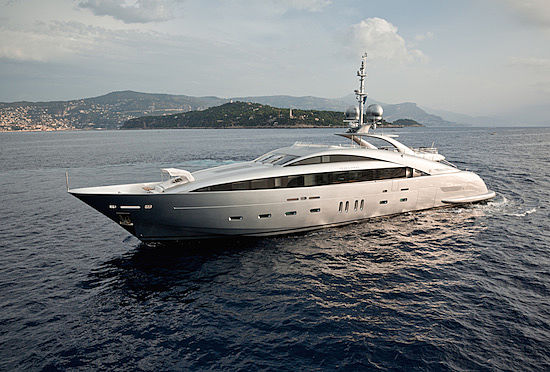 The audio/video, domotic and entertainment integration on board has been made by the Italian company VIDEOWORKS. The 4K UHD technology and the use of products such as Bowers & Wilkins and Rotel in the main salon and in the owner’s cabin allow guests to enjoy the maximum comfort and the best audio/video technology available on the market. Light, curtains, air conditioning and entertainment control are easily managed via IPads in all areas of the yacht, with ease of use and fully customised graphic. 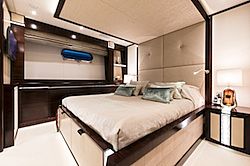 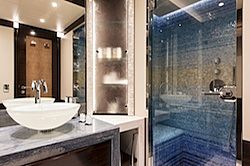 An innovative Active Noise Cancelling (ANC) system patented by Videoworks in cooperation with DII of the "Politecnica delle Marche" University has also been installed on board inside the cabins around the bed.