As one of its largest projects completed in recent years following the delivery of the 70-metre, 1,139-GT motor yacht Galactica Supernova in 2016, Laurentia may be based on Heesen Yachts’ trusted 55-metre platform but she is no ordinary spec-build project. At 740 GT she is also one of the Dutch shipyard’s largest yachts ever and with a last-minute (just weeks ahead of the scheduled launch) acquisition by an experienced owner, she soon also turned into one of the most intensive builds. We speak to the design house behind her interior, Radyca, about the special features inside Laurentia. 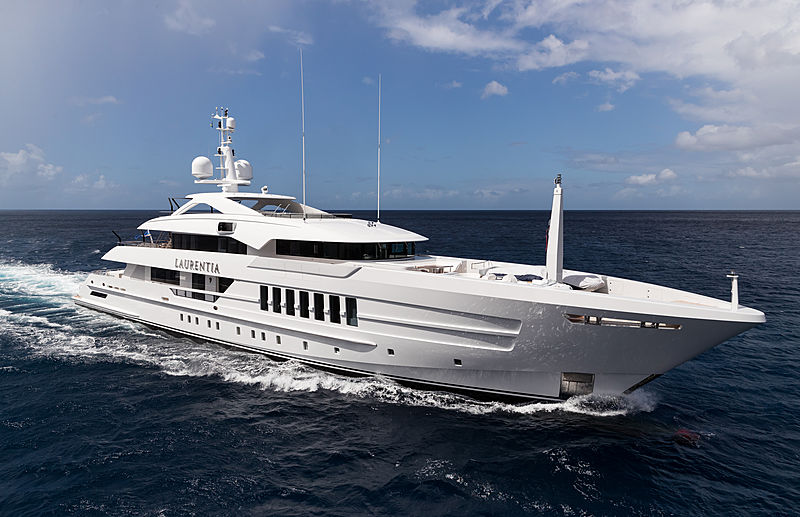 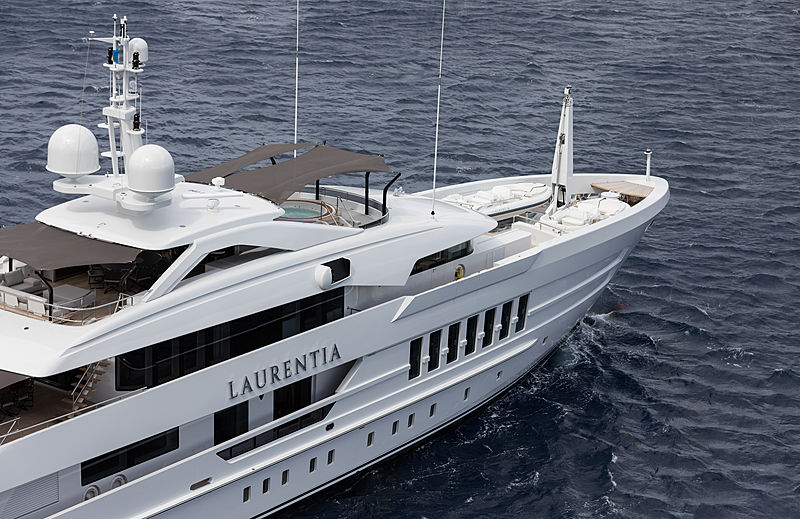 With construction having begun in early 2015 as Project Alida (Laurentia’s code name during the build), the project was following Heesen’s strict build timeline for over two years as one of its speculation projects. It was only in March 2017, some three months ahead of her eventual launch and subsequent delivery, that Barin Cardenas of The New Yacht Company and his client decided on Alida as his latest superyacht. What followed was an intense few months whereby Heesen was pushed to almost entirely restyle the interior and even tasked with some structural changes to the layout. Having accepted the challenge, Heesen’s production floor kicked in overdrive together with the oversight of Cardenas as project manager who acted as the new owner’s eyes and ears. 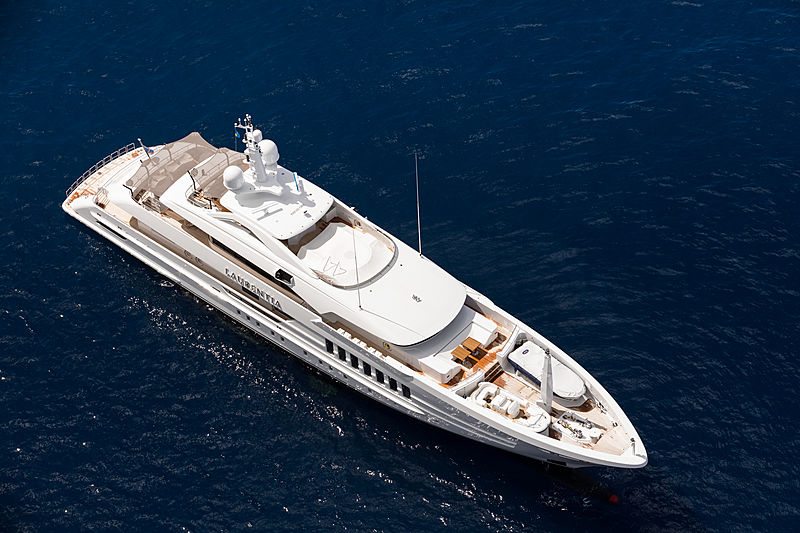 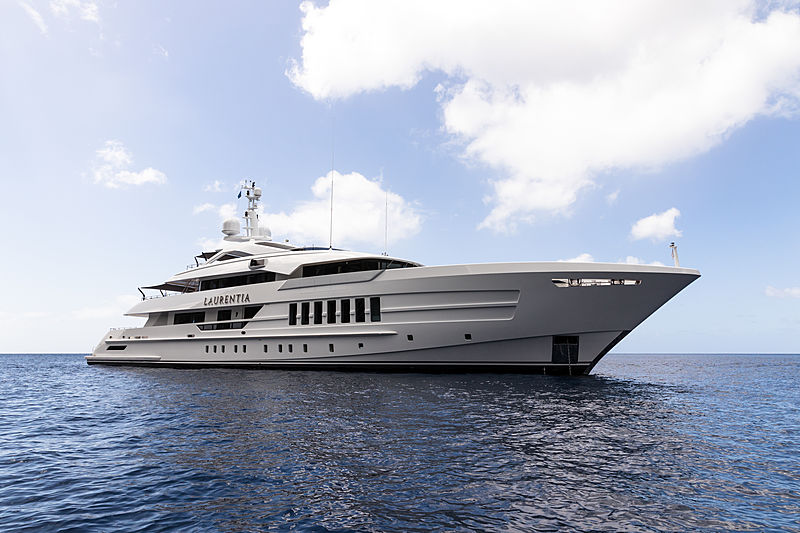 As sistership to the 55-metre Azamanta from 2015, Laurentia’s core is developed by the same Dutch teams from Van Oossanen Naval Architects and Omega Architects who worked on her naval architecture and exterior design respectively together with Heesen’s team of designers and engineers. A powerful profile is further accentuated with aggressive styling cues in the hull and superstructure such as the signature shark-tooth elements aft of the wheelhouse and the racing stripe-like indents in the hull. A high freeboard and substantial superstructure that takes up a good part of the deck spaces give you the impression that this is not another sub-500 GT Heesen. 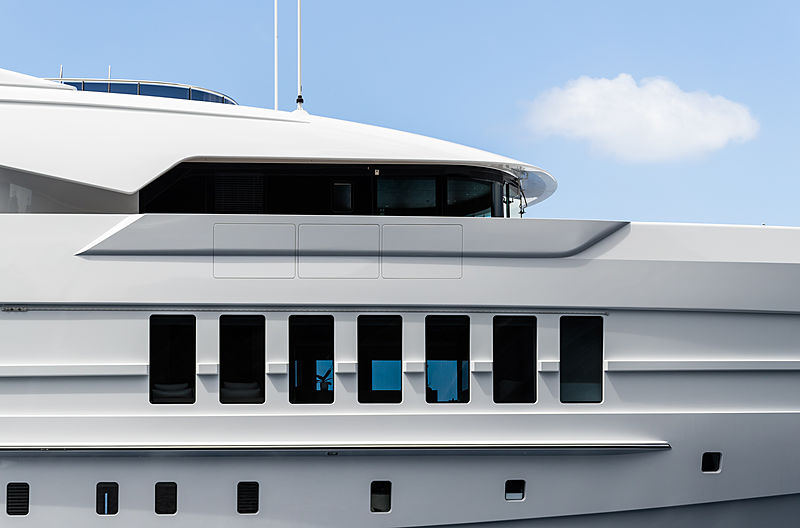 Exterior spaces remained largely unchanged apart from the relocation of the pool on the forward part of the sundeck to facilitate lounging space. The rest of the deck is fitted with a central dining area covered by the T-top and an aft lounging area. 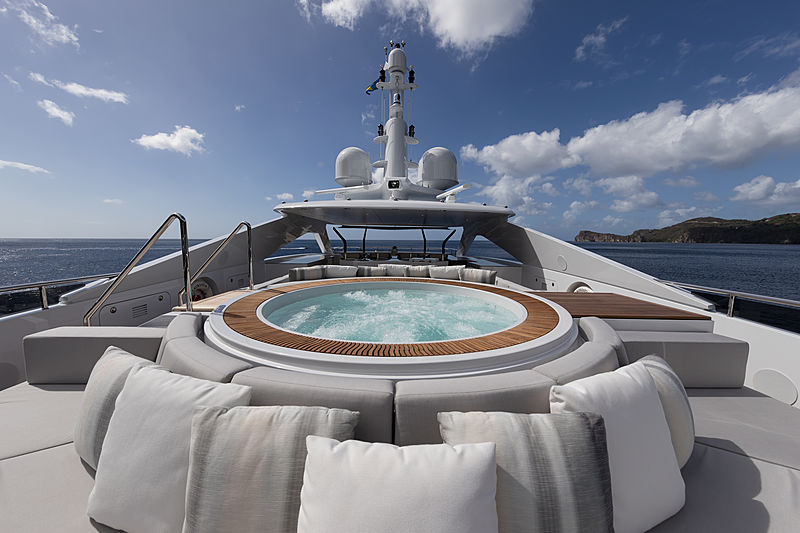 The decks below come with an owner’s breakfast area on the bridge deck aft and a more intimate welcoming lounge on the main aft deck that greets you as you board Laurentia that transforms into a cosy outdoor cinema at night with a drop-down projector and screen and complimentary surround-sound. 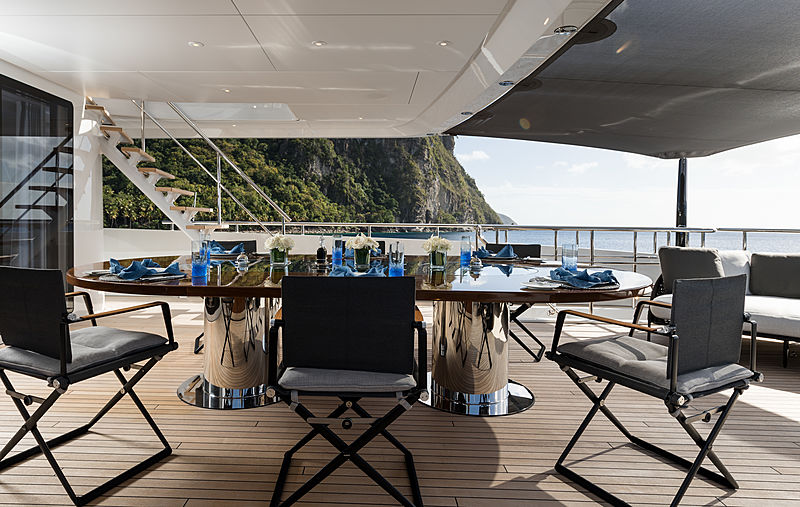 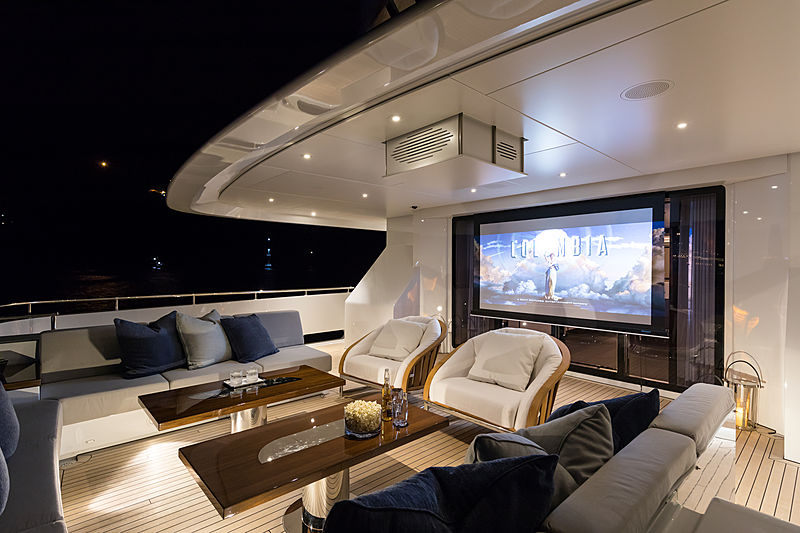 For the restyling of Laurentia interior, her owner had to commision a studio with whom he was familiar with and who could keep up with the pace that was required in order to have the yacht delivery-ready by the summer of 2017. The Miami-based office Radyca fit this description perfectly and joined the rest of the project team from the very beginning. 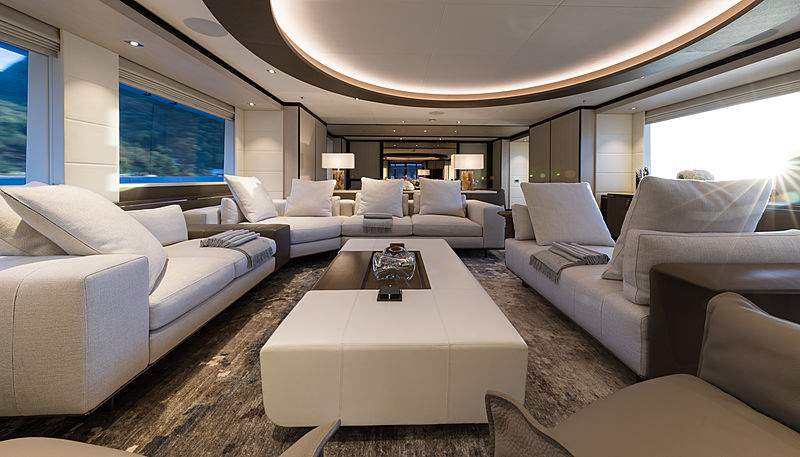 With a nearly-complete Bannenberg & Rowell interior fitted, the change to the interior focused more on the style of the decor to match that of her owner’s lifestyle, rather than alterations to the existing layout. “Laurentia is the sixth superyacht project that we have successfully delivered,” comments Radyca, “and it was the most challenging of all because the task was to completely redo a fully finished interior and add some interesting exterior features like an outdoor cinema in only four months. This required an incredible level of commitment and dedication from everyone in the team.” 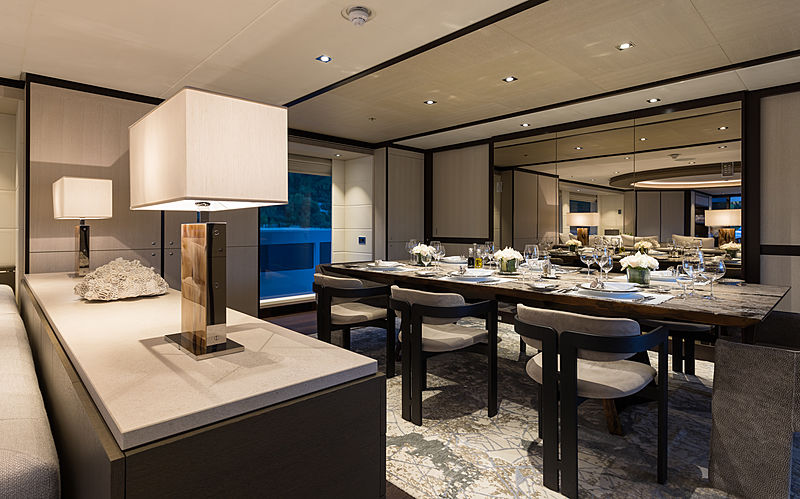 The new style was to be lighter and more welcoming than what Alida already offered. The overall pallet remains a contrasting one, but now with far more emphasis on bright colours than before. “The concept behind the selected upholstery materials for all furniture in Laurentia was one of highest quality and comfort, continues the designer. “All fabrics, leather and suedes were carefully selected to enhance every piece of furniture.” 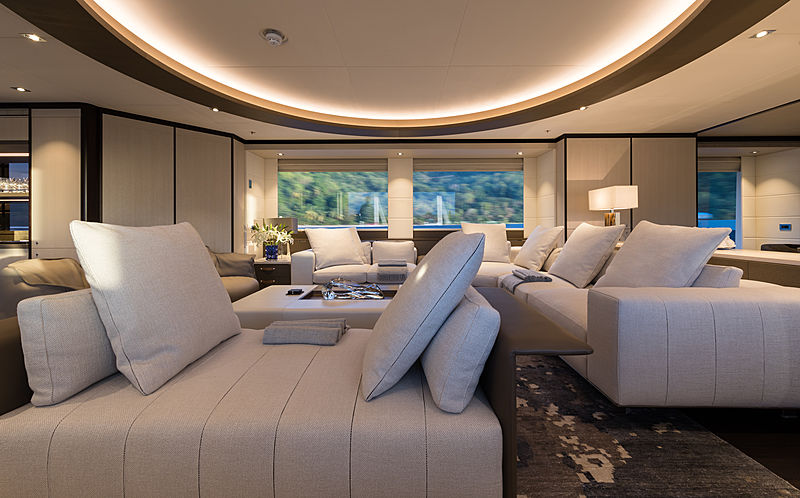 In the sky lounge, Heesen removed a secret crew passage to port in order to instal a massive mirror TV wall. This area is dedicated to relaxing and features a U-shaped sofa with freestanding oversized chairs and a bar setup looking out through the generous windows. 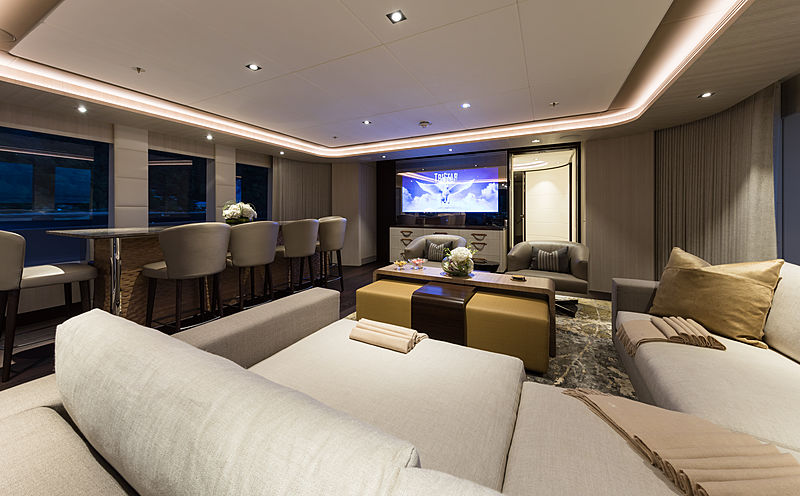 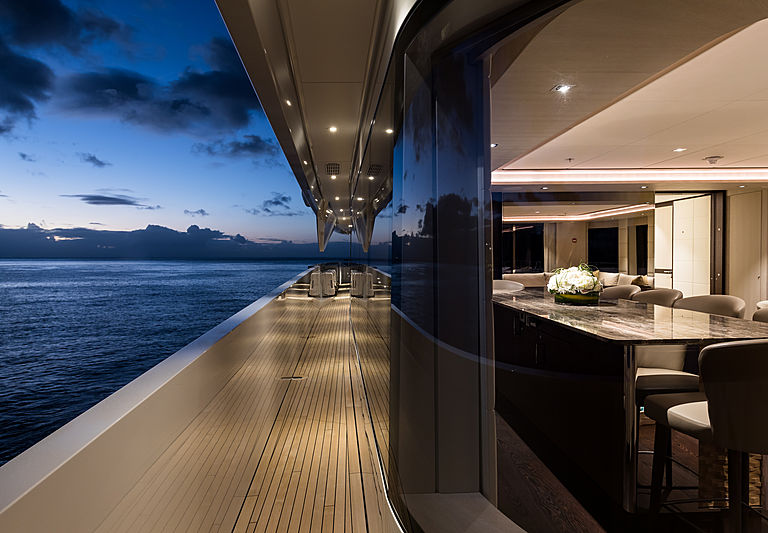 In terms of accommodation, Laurentia has six guest suites with the master suite being the largest and most lavish of them all. Placed forward on the main deck behind those large sequential hull windows so visible from the outside, the suite takes on the sophisticated and high-tech ambience of the rest of the interior. Bamboo-lined panels above the bed creates a soothing effect while another quirky pattern on the carpet reminds you that Laurentia is not all about business. 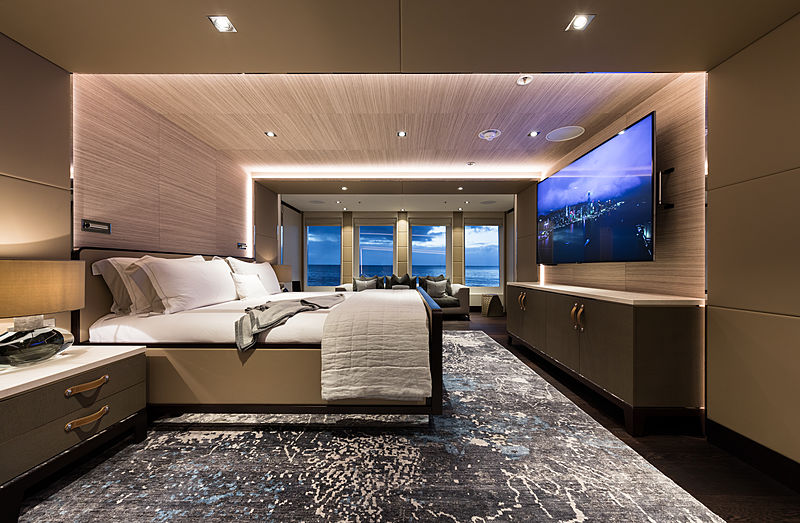 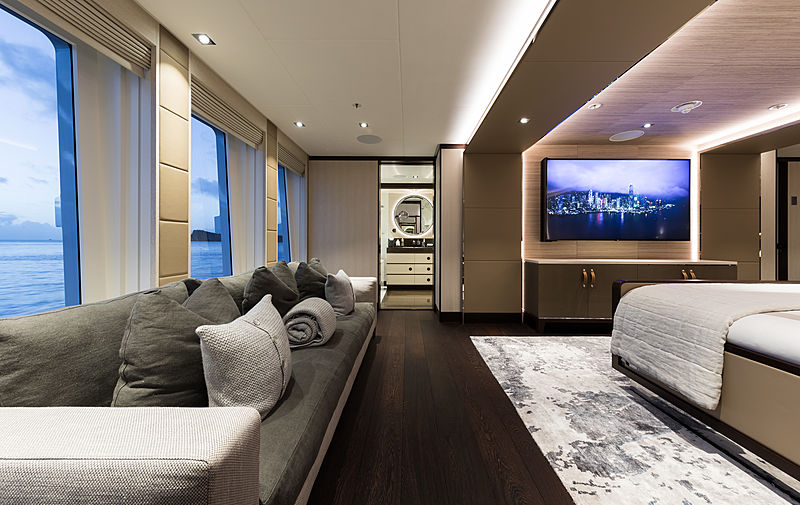 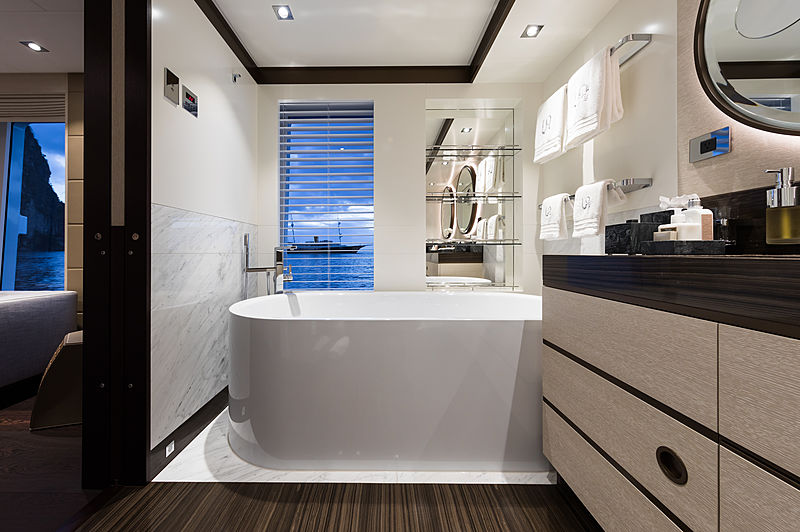 Five additional cabins can be found on the lower deck for a total of 12 overnight guests. “Neutral to Earth tones were used in linens and cottons along with some speciality outdoor fabrics in deep blue tones for accents.” 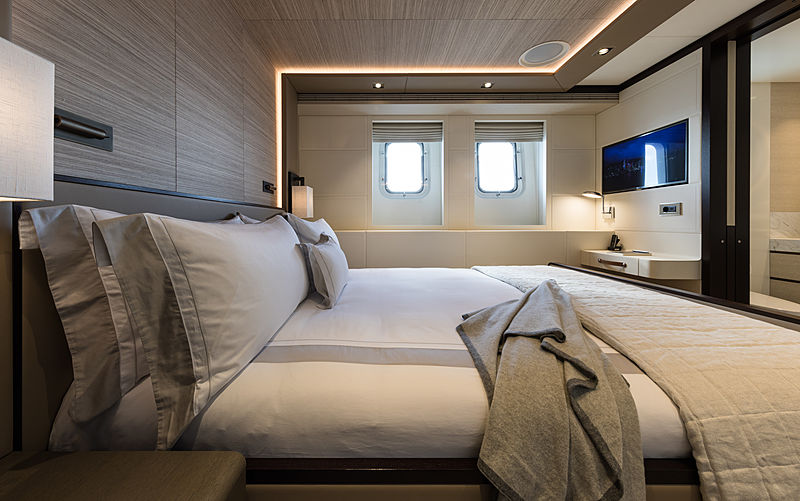 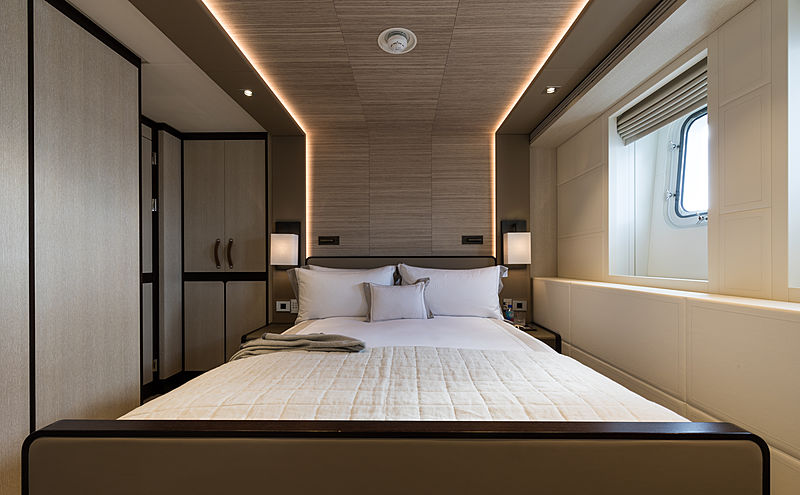 Also on the lower deck are the crew quarters (forward) and a large beach club with gym equipment for guests to stay active while out of the office. 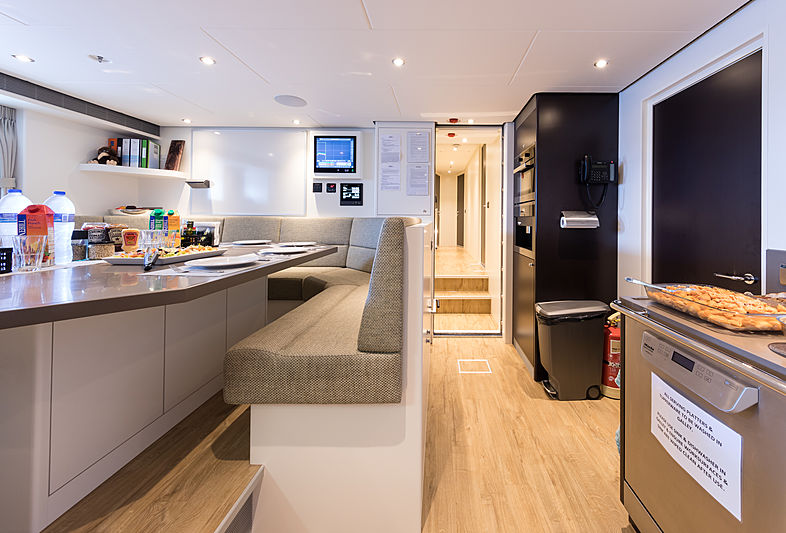 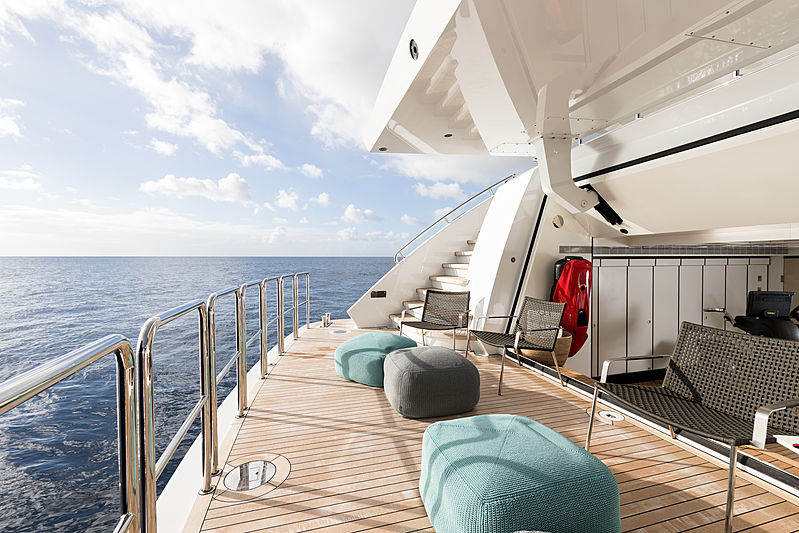 Built for blue water cruising, Laurentia benefits from Van Oossanen’s slick FDHF hull form that forms the base for so many of Heesen’s projects. Considering that Laurentia is designed for comfortable cruising over speed, her top speed of close to 17 knots is as impressive as her 4,500 nm range that can comfortably cross the Atlantic and then some. 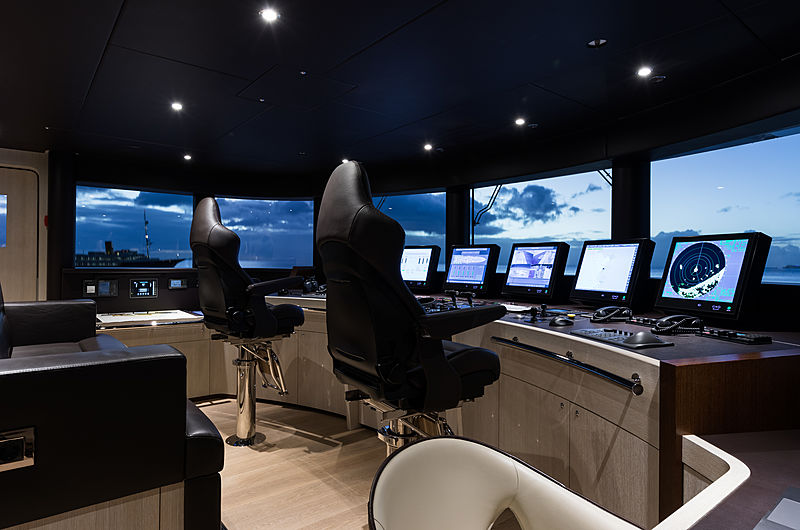 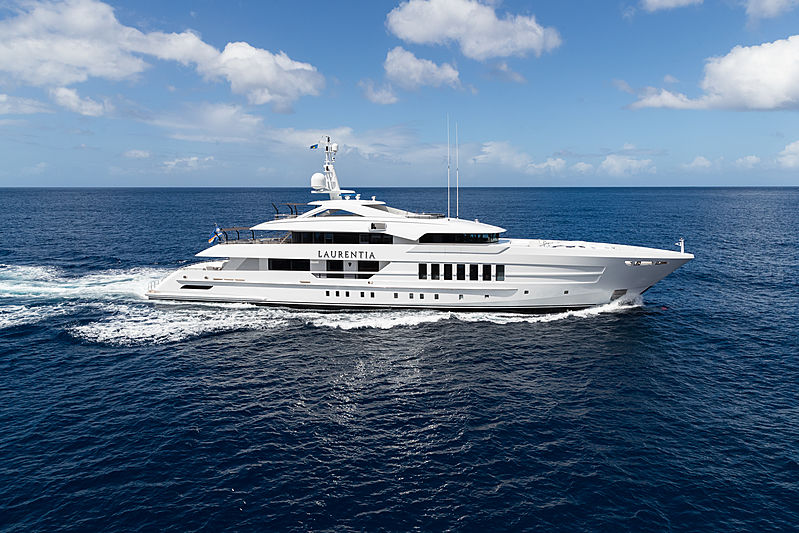