When CMB Yachts launched its last big superyacht, the 47-metre Orient Star, in 2012, it would be another five years before this Turkish shipyard returned to the superyacht scene with a bang. Liquid Sky, or Project Miracle as she was known throughout her build, is an evolution of the shipyard’s 47-metre line of GRP yachts with an entirely new look by from the hand of Espen Oeino and his international team in Monaco. 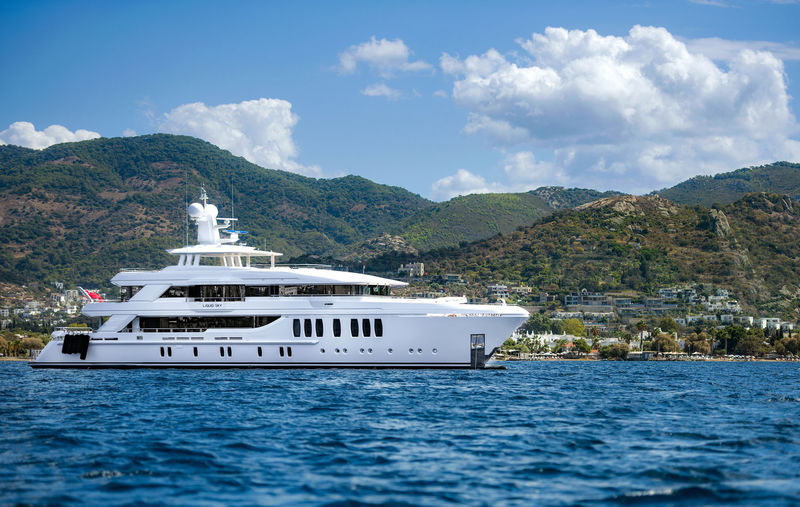 Not only is the exterior style something new for CMB, but everything from the engineering, structural design and interior layout has been modified and updated for an entirely new experience on board. CMB’s architecture team made sure that Liquid Sky would deliver a safe and comfortable ride at sea while High Modulus and Gurit were in charge of the structural engineering to support the new face of the design. 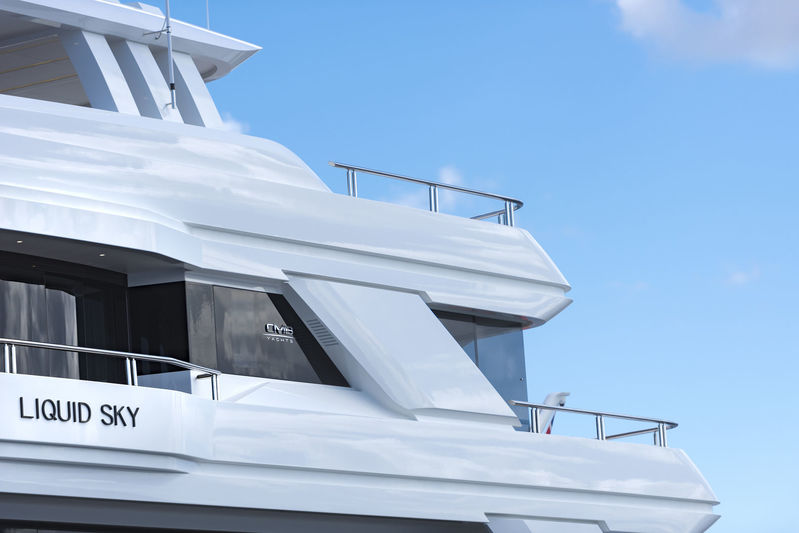 Seen from the outside, certain styling cues have remained that were found on Orient Star such as those curvy fixed side balconies on the upper deck and the long piano-key master suite windows. 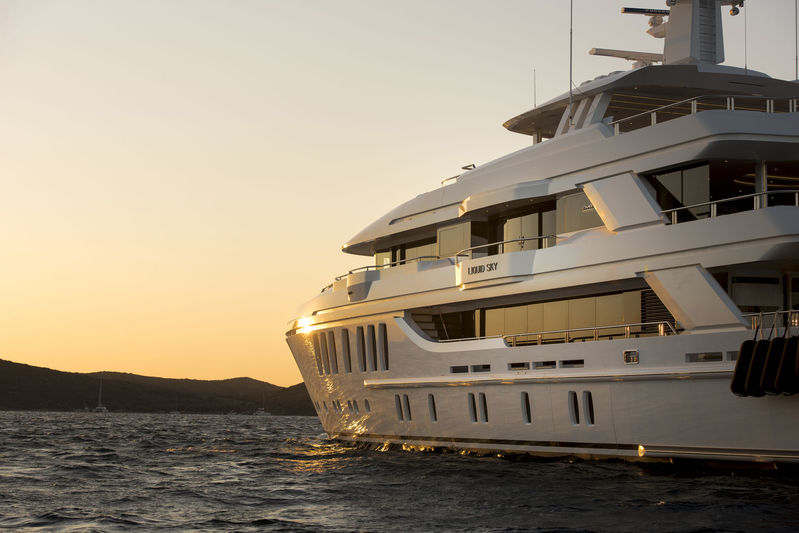 Oeino, however, added several improved touches, and nowhere is this more visible than on the sun deck. Gone are the wide and obscuring fashion plates that support the mast structure with now only three beams on each side creating a sensual experience at night with in-laid LED mood lights. Low side railing and an extended forward part now make this space bigger and brighter than ever before. The aft area is designed for sunbathing and connects with the large Jacuzzi. A waterfall feature in the bimini structure separates a wet bar from the rest of the pool. 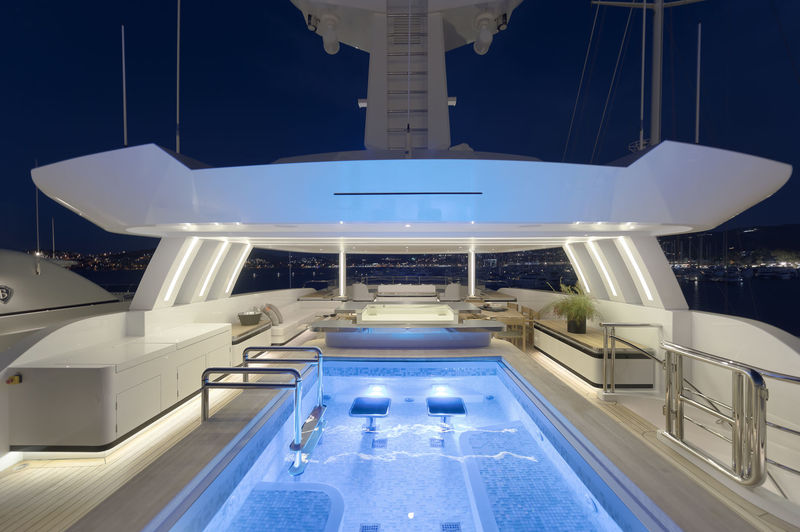 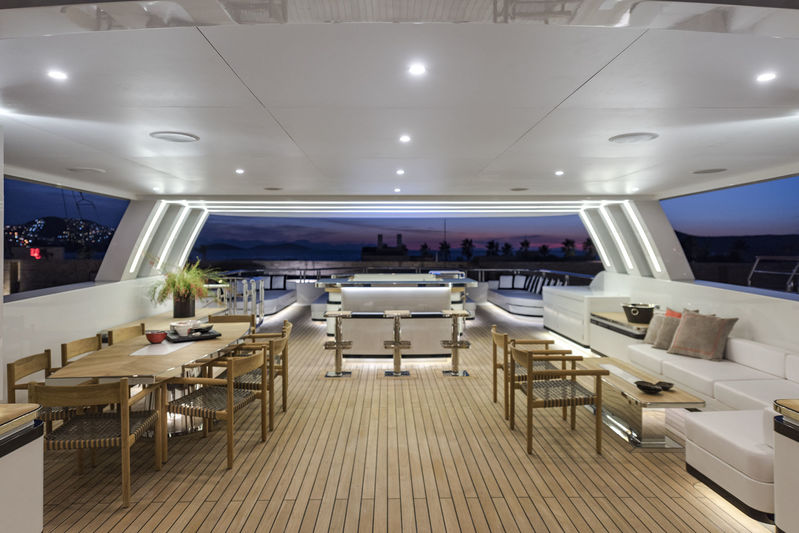 The bridge deck aft is an LED light festival and this mood enhancing element has been applied to just about every corner of the outdoor space. Backlit marble behind the bar adds a mystical touch and the ebony superstructure inserts create a luxurious feel as you are drawn into the upper saloon. 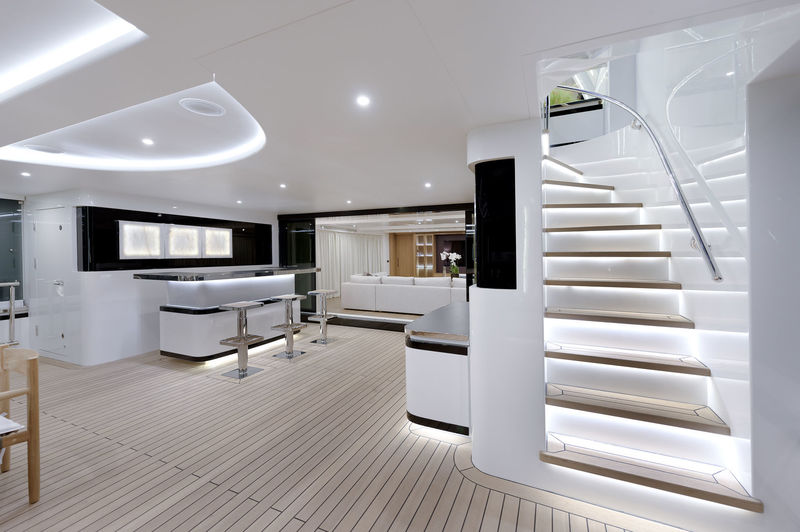 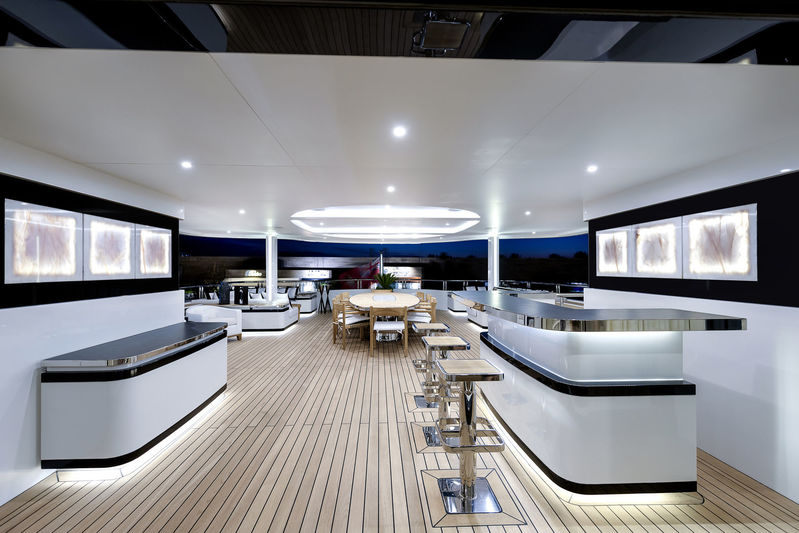 The skylounge, as it is known, features curved floor-to-ceiling glazing on either side that opens up onto the side balconies for incredible views. Further forward past the giant TV wall is a gym for the more active guests on board. 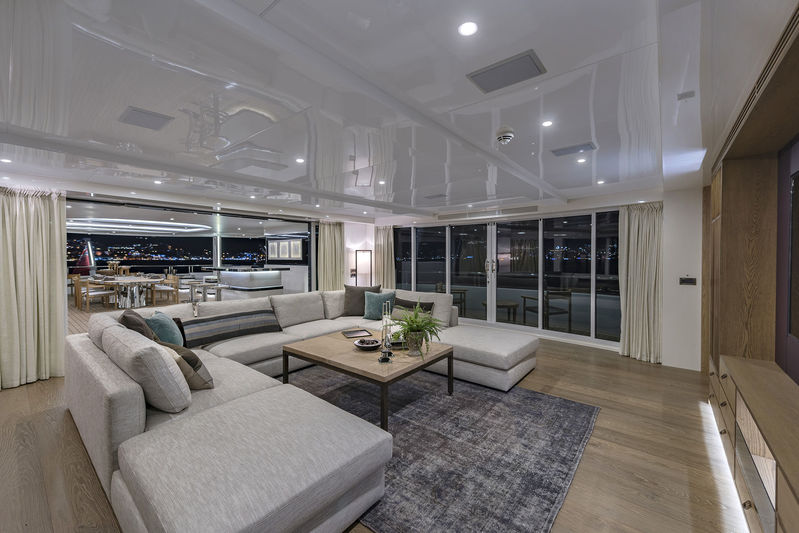 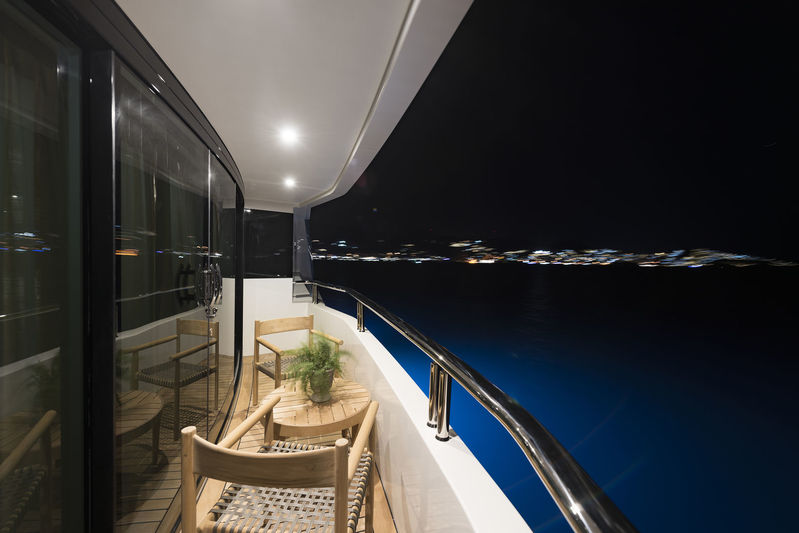 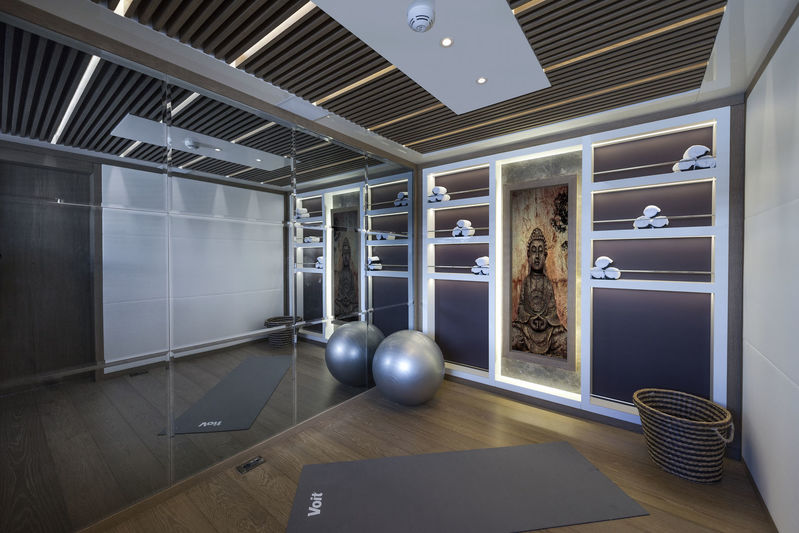 The opulent interior is designed by Arte-Bel Design Studio and can accommodate up to 10 guests. The master suite forward on the main deck with its luxury beach house feel is the perfect retreat at the end of a fun day on the water. A private study and mini lounge welcome you as you walk into the suite and forward to the sleeping quarters and its bright and homely décor. 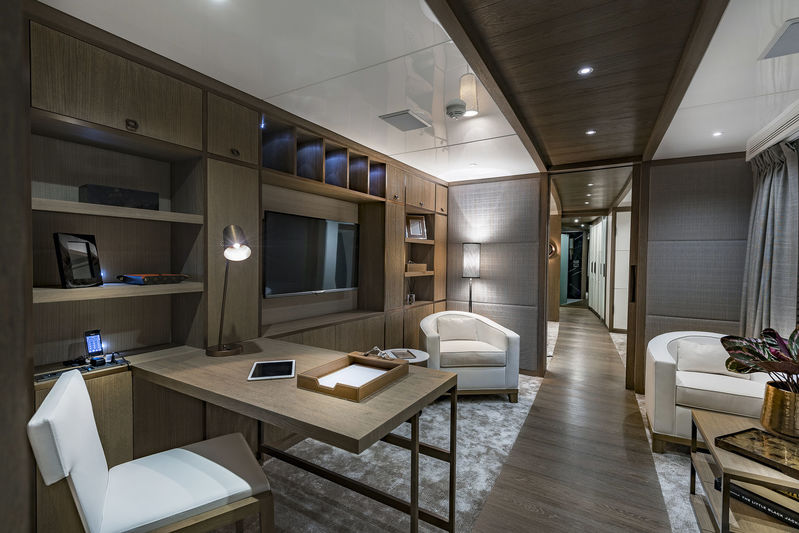 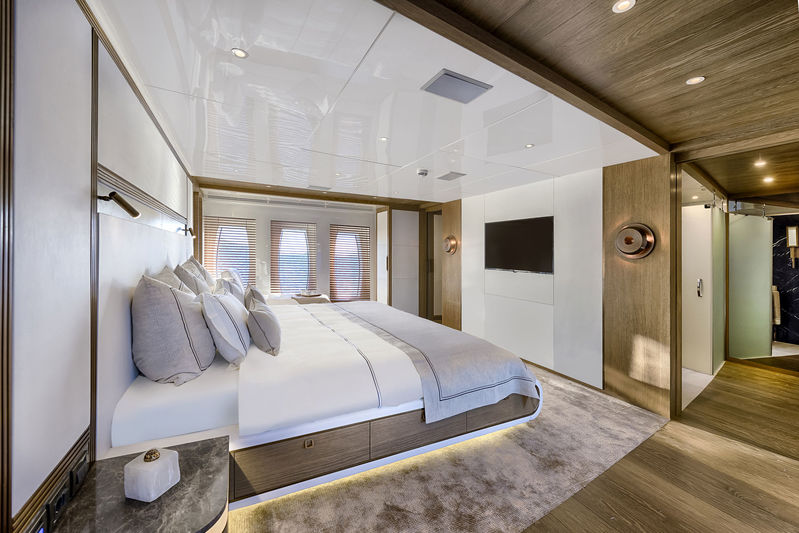 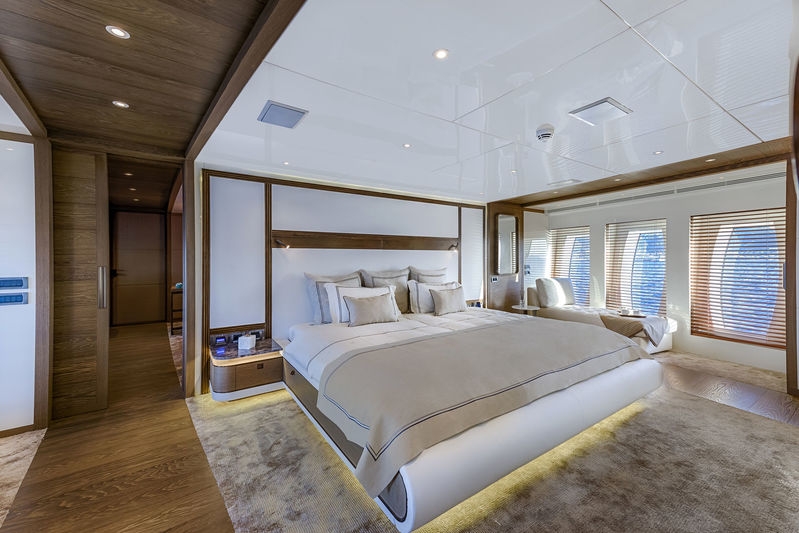 In addition, there are four more cabins on the lower deck, consisting of two VIPs and two guest cabins; each finished in its own colour theme. The eight crew members are also housed on this deck with a crew mess and cabins in the very forward part of the yacht. 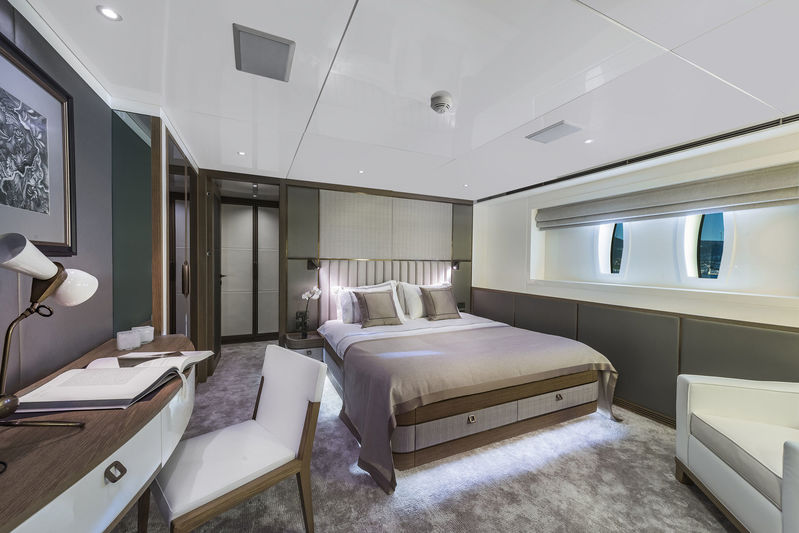 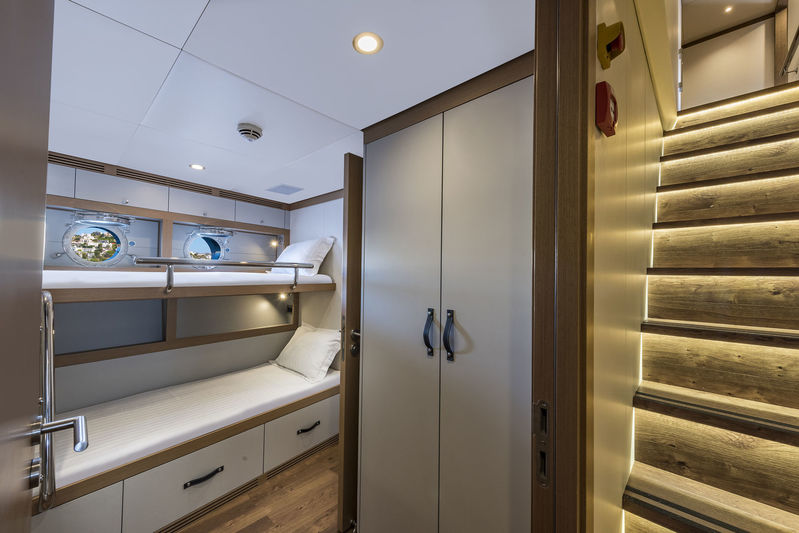 Liquid Sky has a pair of 1,450HP CAT C32 engines allowing a top speed of 15 knots. At 10 knots she can travel up to 3,000 nm on a single tank and her draft of 2.7 metres makes accessing secluded bays and coves a breeze. 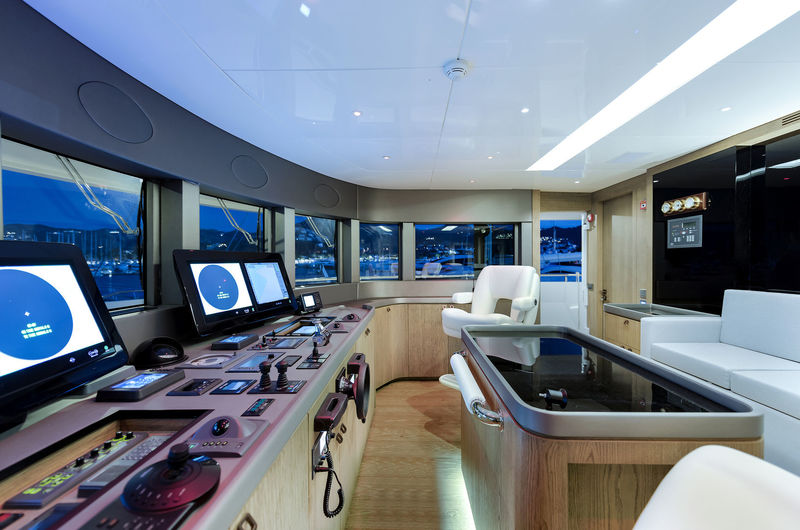