Constantly working on refining their Majesty range of superyachts, Gulf Craft has mastered the art of tracking the market’s demands and developing new and exciting products accordingly. The new Majesty 140 is one example of this ingenuity shown by the luxury Middle Eastern yacht builder, which now sits comfortably between its Majesty 122 and 155 offerings. It is in Dubai where I step on board the newest member of the Majesty family to be pleasantly surprised by what Gulf Craft managed to pack into a 43.3-metre superyacht. 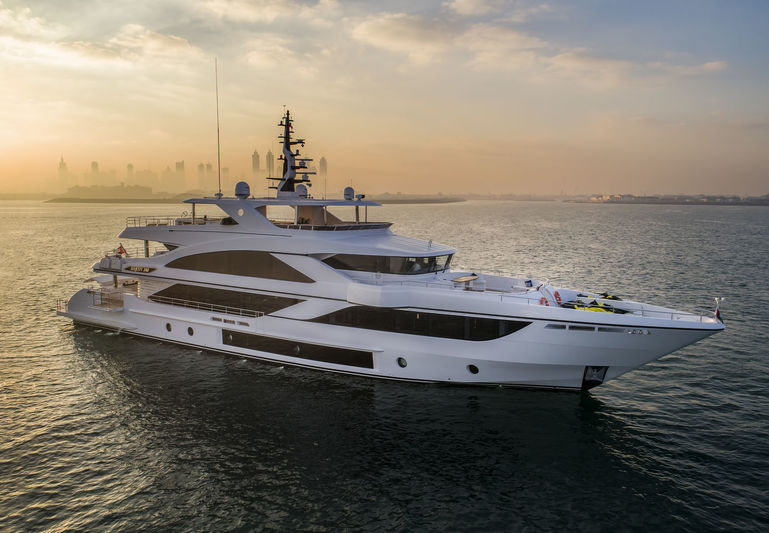 Although the Majesty 140 is based on the hull of the former 135 model (albeit a slightly longer version), this is about the only thing that she shares with here smaller sister of which seven units were delivered over five years. The new exterior design is sharp and cuts through the air much like her fast semi-displacement GRP hull that slices through the water at 20 knots top speed. The negatively-angled wheelhouse windows are a first for the Majesty line and so are those massive portholes on the lower deck at water level that gives the 140 such distinctive look when viewed from the side. 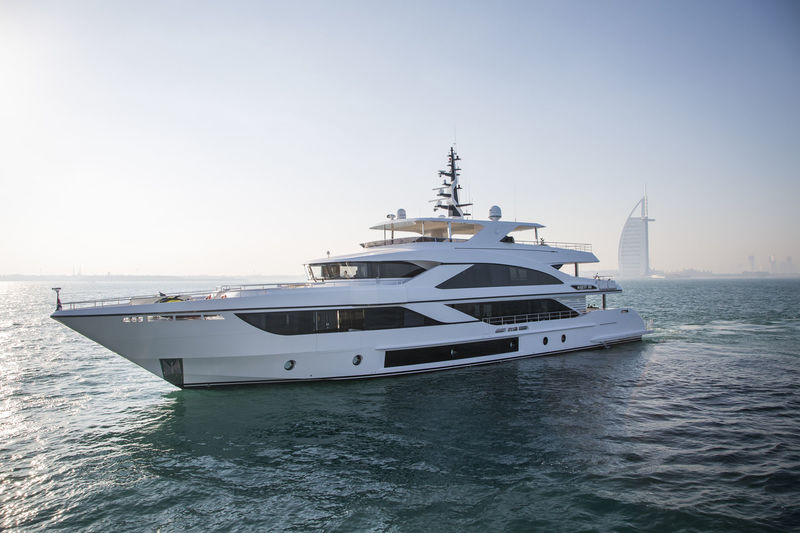 Designing and building a yacht for a global audience that stretches from the Pacific to the Caribbean is no easy task, but Gulf Craft managed to achieve just that with a winning combination of features that leaves you wanting very little else than what is already on offer. Not only that, but these feature all feel connected and work together to make the boat a space you can actually live in, instead of an optional-extra checklist that has been stitched together on top of a standard platform. 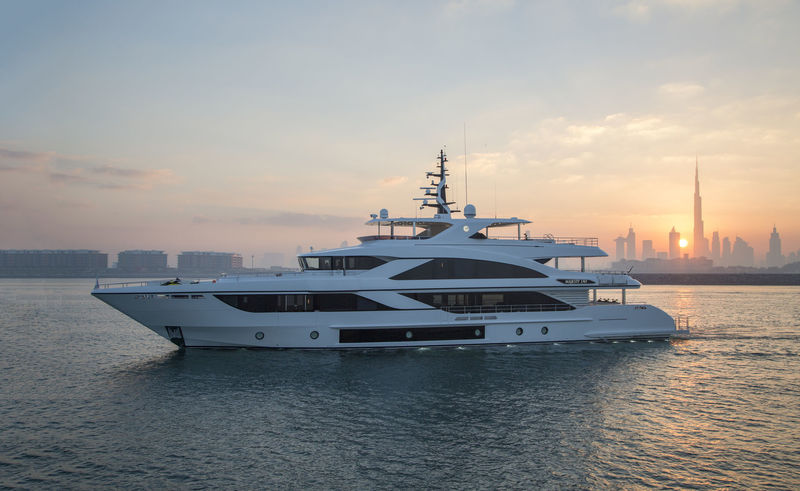 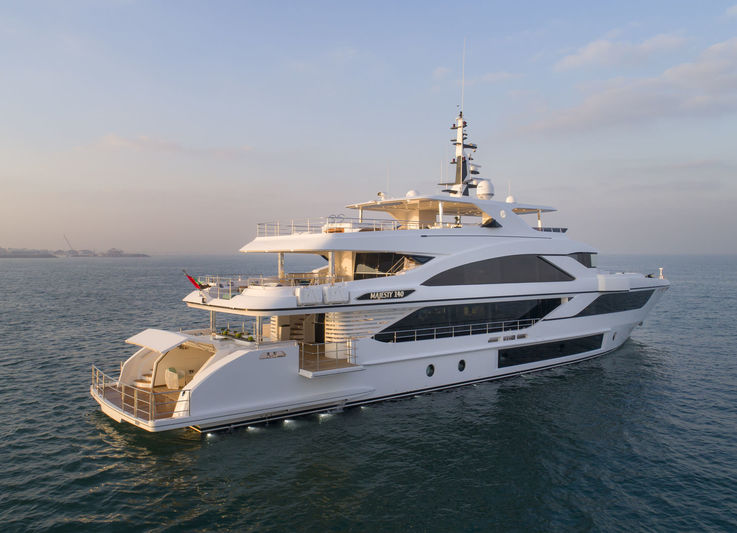 The sundeck is one of the prime spaces on board that can serve several purposes depending on the yacht’s cruising ground and guest list. Gulf craft divided this area into several social zones that are all covered under a raised canopy that comes with two soft canvas areas that can be retracted depending on the weather and whether you are in sunbathing or entertaining modes. 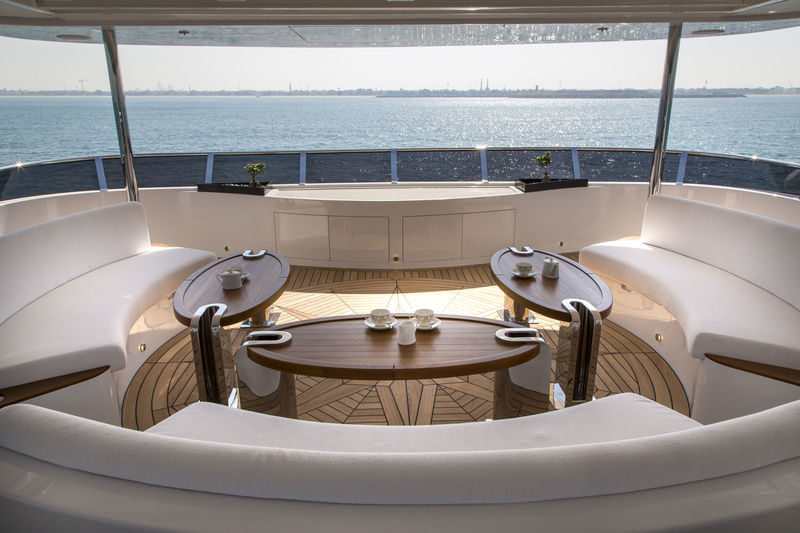 The deck features a large bar to starboard and an adjacent dining area while a circular gathering lounge forward provides you with the perfect sunset view after a long day at sea. Towards the stern is a jacuzzi placed on the deck that is surrounded by loose sunlounger chairs, making this deck truly an all-in-one hangout spot for the entire family. 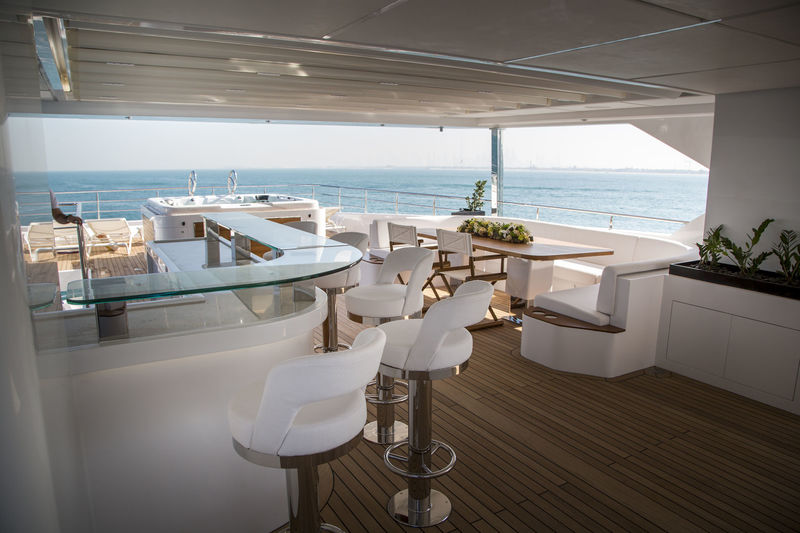 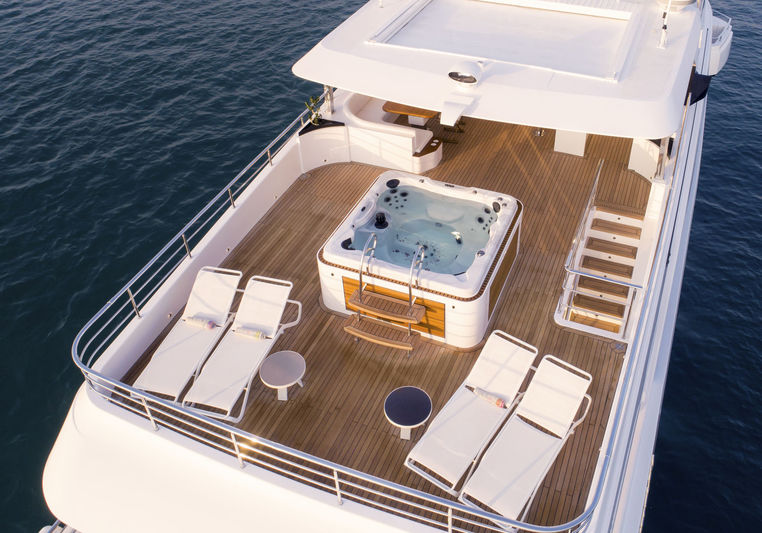 One level below, on the bridge deck, life takes on a slower pace as this level was designed purely for relaxation and comfortable living. The arrangement here is relatively simple, with a large deck outside for a grand outdoor dining table and built-in seating areas that are ideal for hanging out on when underway. 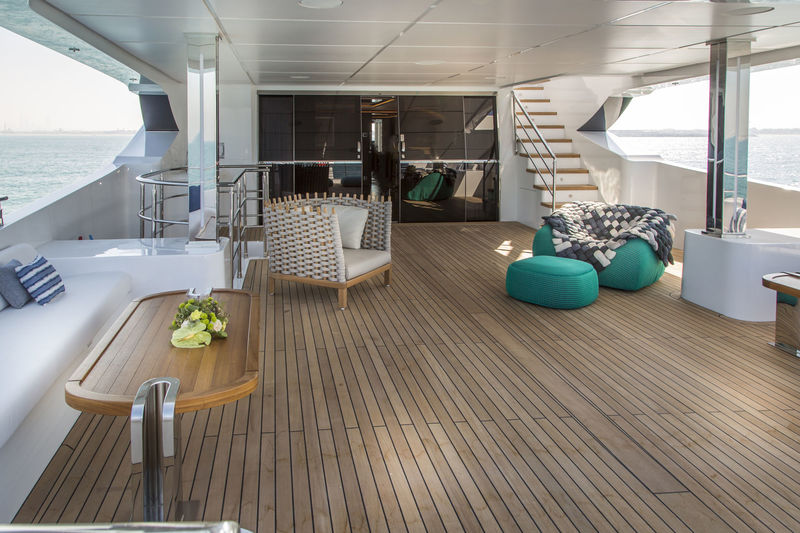 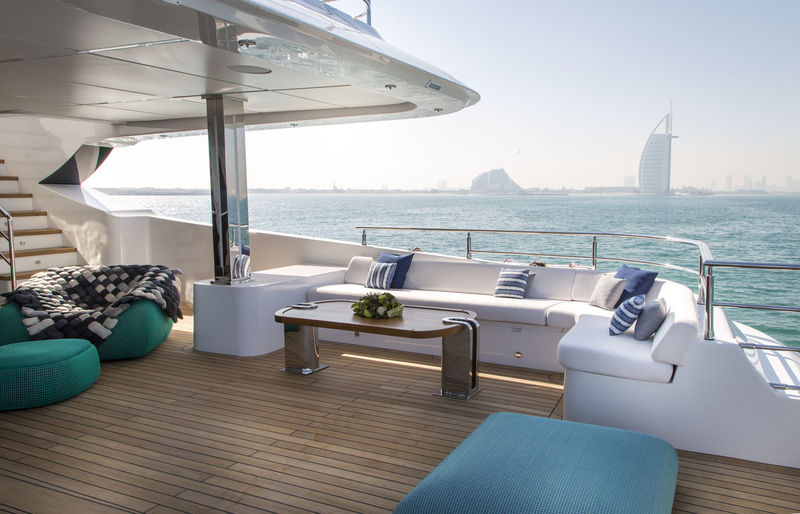 Inside, the skylounge is dressed in a rich colour scheme of earthy tones and soft-touch materials. The matte wooden flooring feels natural on your feet as you walk over to the L-shaped bar to get a closer look at the mesmerising backlit panels. Gulf Craft mentions that this deck can also be finished in as a master suite, allowing two VIP staterooms to be installed forward on the main. The choice is yours. 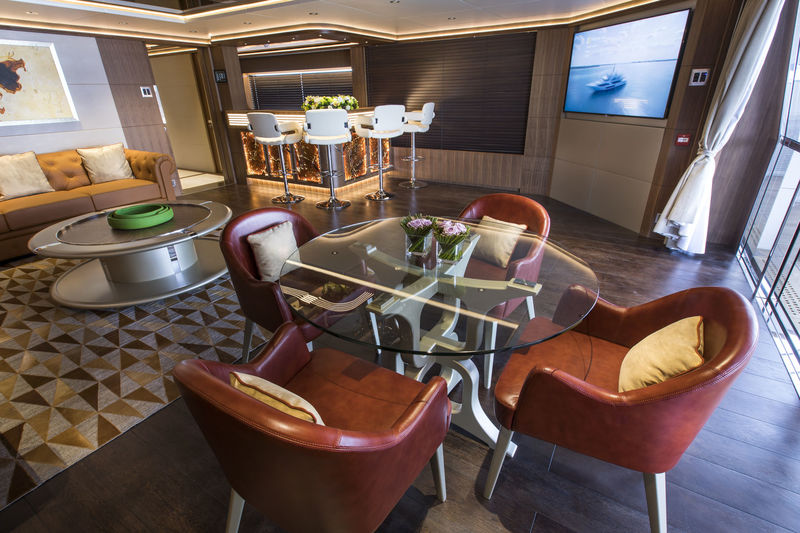 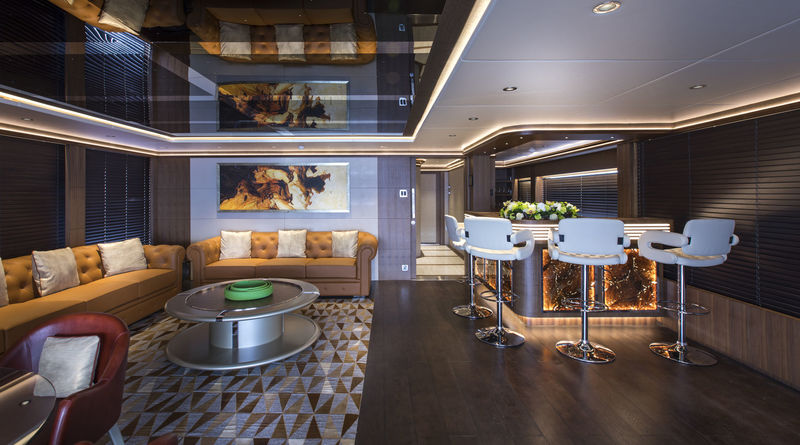 In this first unit of the Majesty 140 family, C’est la Vie, the forward part of the main deck is dedicated to the full beam master suite and sits just ahead of the professional galley. Going one step beyond the traditional fold-down balcony that forms part of the hull structure, with the 140 Gulf Craft developed a fixed balcony that can be accessed at any time through the sliding doors with a simple push of a button from the owner. 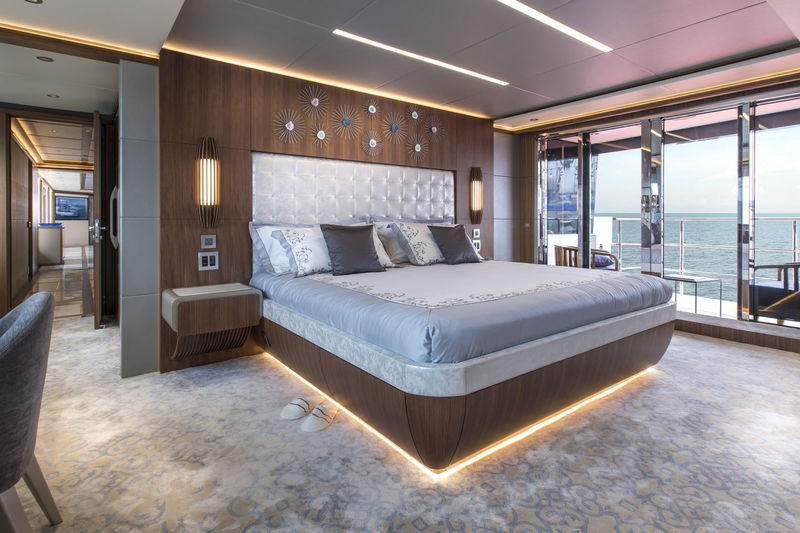 The decor inside is bright with soft pastels and soothing LED lighting creating a calming effect. The ensuite bathroom is generous and is an orchestra of marble and other mirrored surface for that crisp, clean feeling. 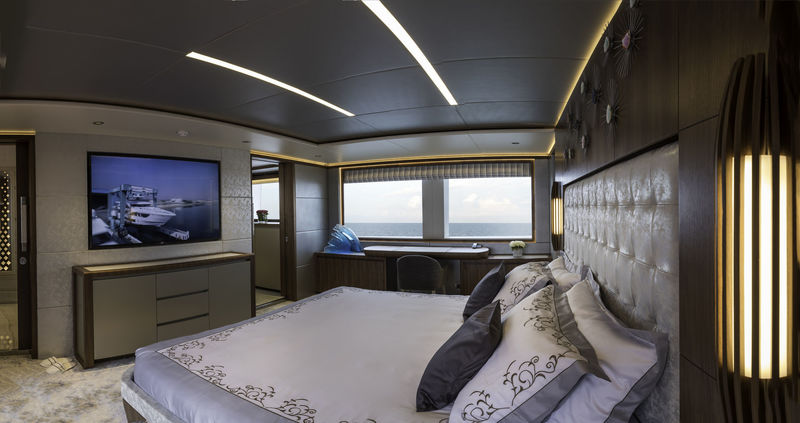 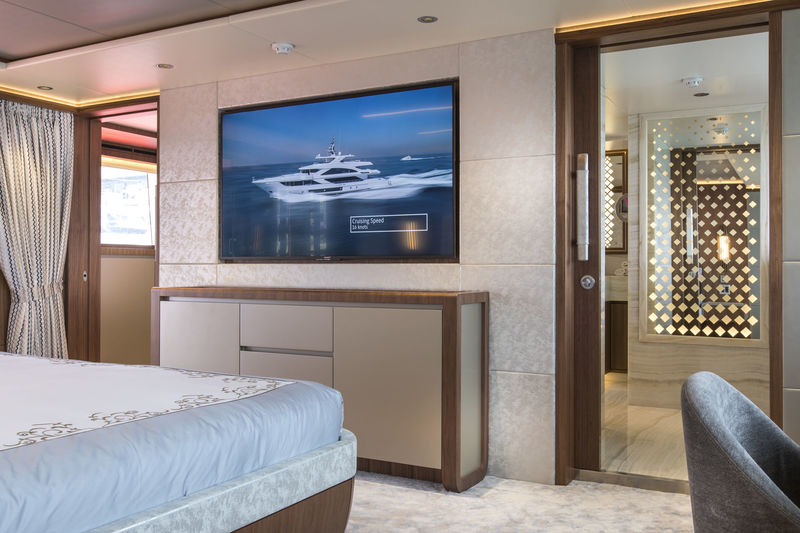 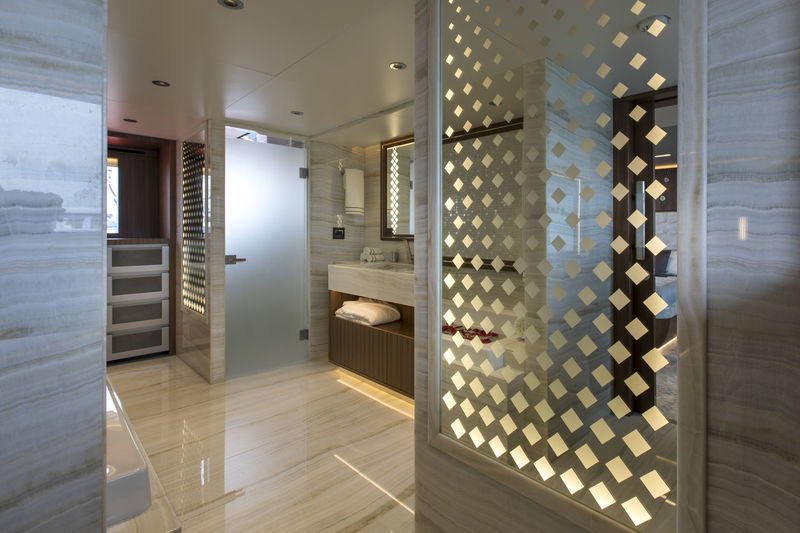 The same level of detail and execution is visible on the lower deck which can be reached either via the central staircase or the onboard elevator. Here, guests can choose from two double or two twin cabins with the former two acting as VIP suite with larger portholes and ensuite bathrooms each. 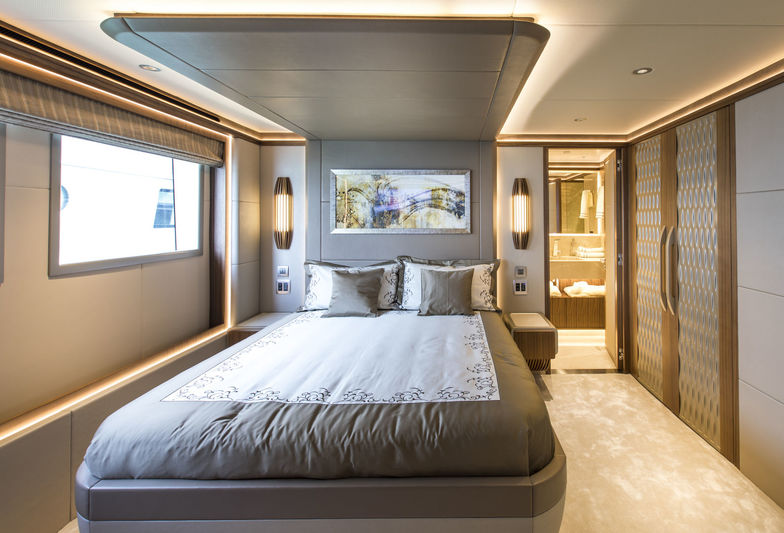 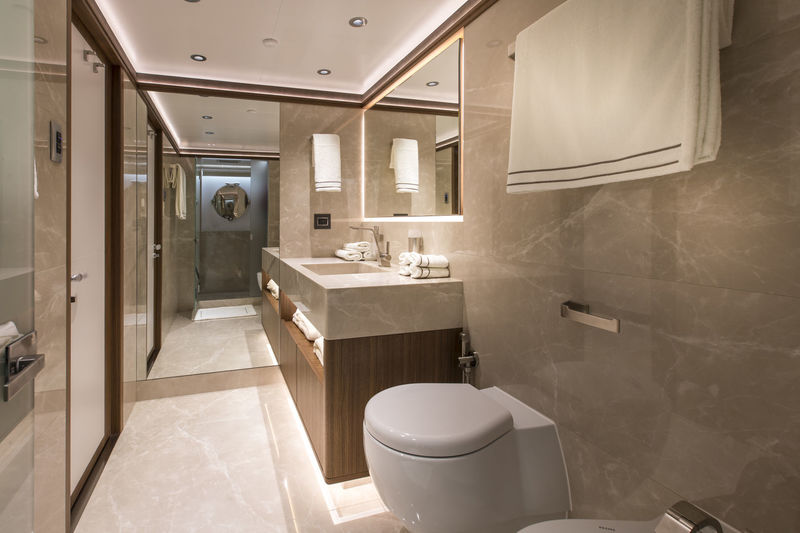 Back on the main deck, the spacious saloon leads out onto the aft deck where a fold-down balcony on either side is the first thing you notice. Conventionally located amidships, moving these aft brilliantly opens up the aft deck and could well be the secret to having guest make use of the balconies, but also the entire main deck itself. 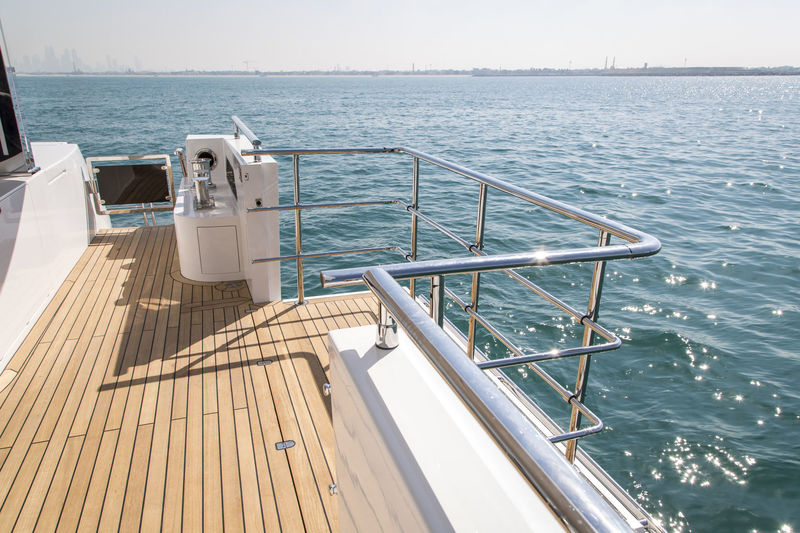 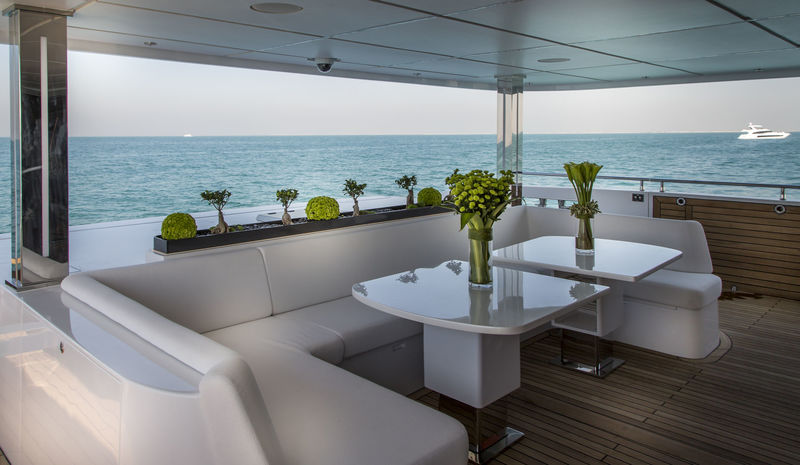 When things get too hot for the jacuzzi on the sundeck, a dip in the ocean is the only solution and the best place on board to that from is the beach deck. The entire transom opens up to reveal a sheltered beach club where the entire family can hang out while others zip around one of the two jet skis that are stowed on the foredeck. 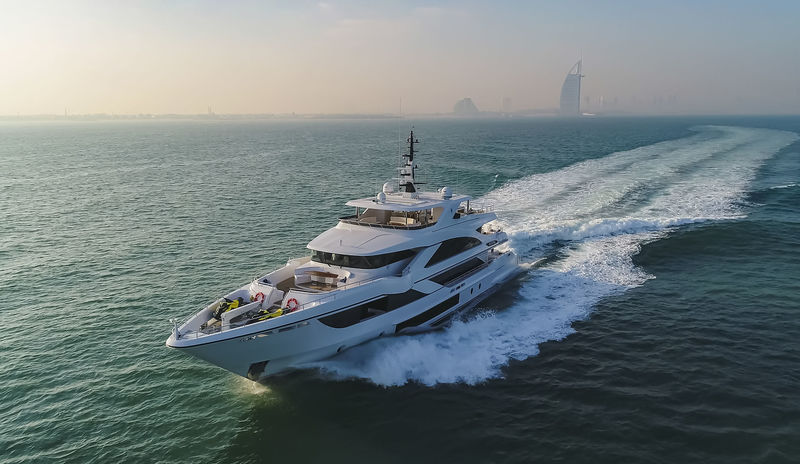 When it comes to weigh anchor and set off into the sun, the Majesty 140 is good for 3,300 nautical miles on a single tank, ideal for exploring the Mediterranean with family and friends or even island hopping in the Bahamas with that 20-knot top speed.