Home > News > SuperYacht of the week: My Shanti, a proud, solid, and beautiful Amels

Edited by Maarten Janssen and photos by Marc Paris

Providing her owners with a magnificent lifestyle, as many sea miles passed under her keel, she’s as proud, solid, and beautiful as the day she was launched by Amels, and delivered to the welcoming arms of her proud owners. 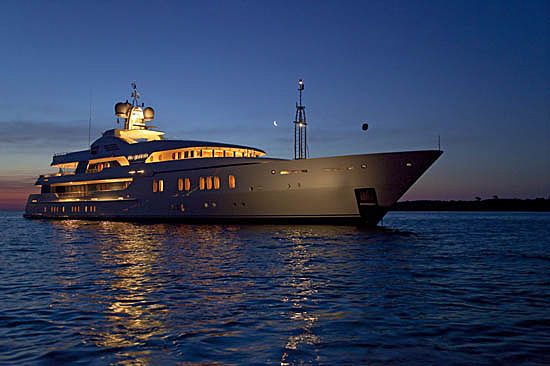 During the recent Antibes Yacht Show, her builder and broker invited SuperYachtTimes.com on board this, until recently very private, superyacht. 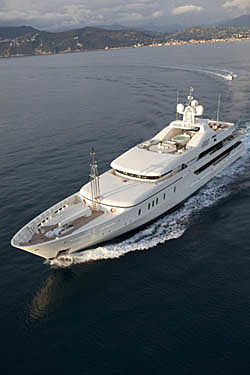 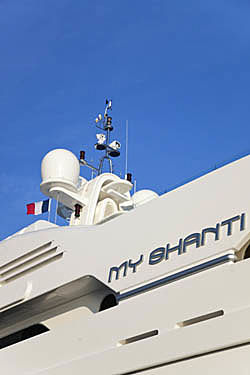 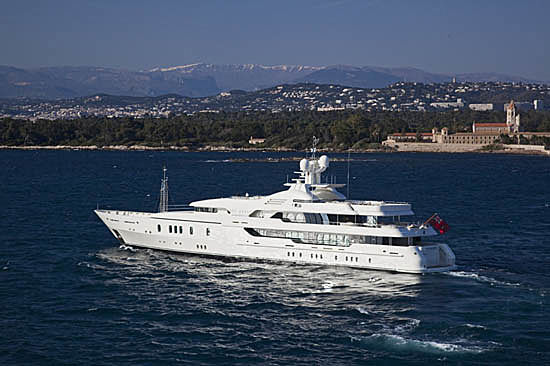 When they commissioned Disdale to draw My Shanti, her owners were sailing a 50-meter Amels (one of the Tigre D’Or Series also drawn by Disdale), which they adored and enjoyed to the fullest. To gain more space for their growing family, the brief to Disdale was essentially to shape a larger yacht “not radically different in spirit” from the 50 meter, “filled with everything they could want or desire.”

Disdale shaped the exterior with his usual fluidity, placing the full-beam master suite, with office and study, on the main deck forward. He could have added an extra deck, but instead kept the profile low. 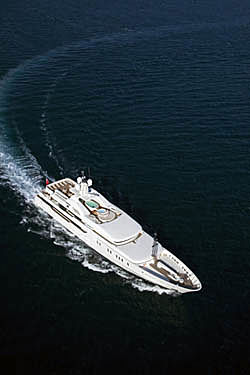 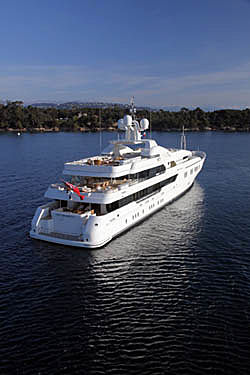 To create extra space for luxury accommodations, Disdale eliminated a tender garage and placed the tenders on the yacht’s large foredeck instead. For crossings the tenders can also be stored on the sundeck and upper aft deck. When SuperYachtTimes.com spoke to captain Kenan Seginer, he informed us that the high bow of My Shanti provides plenty of secrurity to leave the tenders stored in their forward position, even in the worst of weather. 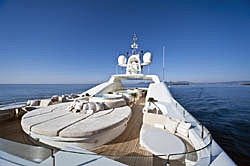 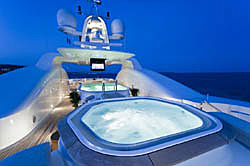 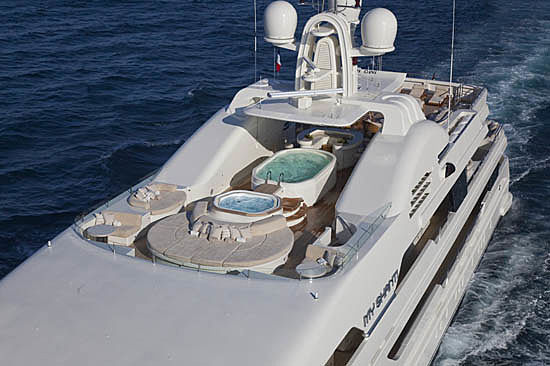 Disdale designed a 27.5-meter sun deck, with a Jacuzzi, swim-jet pool, bar, and lots of sunning areas. It is on the sundeck that you fully appreciate the sheer size of this superyacht. It is arguably the most spacious sundeck that one can find on a 65m yacht. There was ample room left for a touch-and-go helipad. 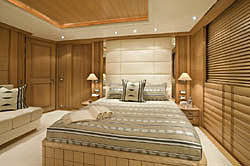 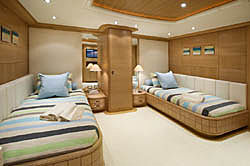 With 1,189 Gross Tonnage, My Shanti has plenty of room for adults and children, taking advantage of a 55-percent increase in volume over the 50 meter. With six guest cabins below—four doubles and two twins—and lots of Pullmans, she can sleep 29 on a cruise. Crew accommodations were arranged for privacy, including two doubles for couples, to encourage crew to remain aboard longer. This remarkable capacity for guests and 17 crew was permitted under MCA regulations by the Cayman Island Flag Authority, who will give the yacht a dispensation so long as she carries all required life-saving gear. 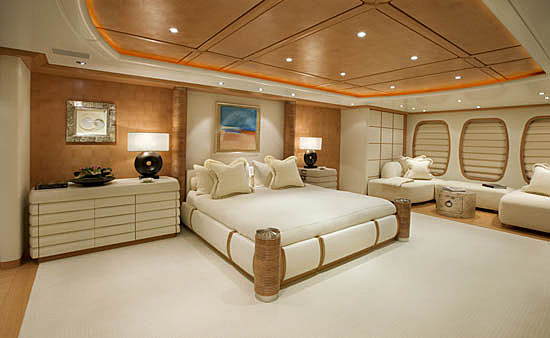 The owners’ suite, located forward on the main deck, includes a full-beam stateroom and is characterized by huge oval windows and a wealth of bleached oak and neutral fabrics, giving it an especially bright feel. Ribbed oak paneling, a typical Disdale touch, is found throughout the cabin. 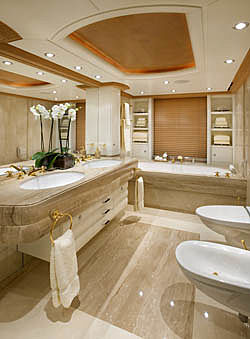 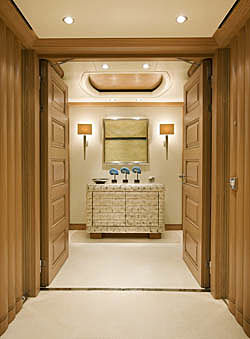 The cabin, an oasis of calm, is entered through a private lobby that opens to the main stairwell, and features an abundance of storage space for clothes and personal effects and features a separate dressing room, and two beautiful bathrooms. 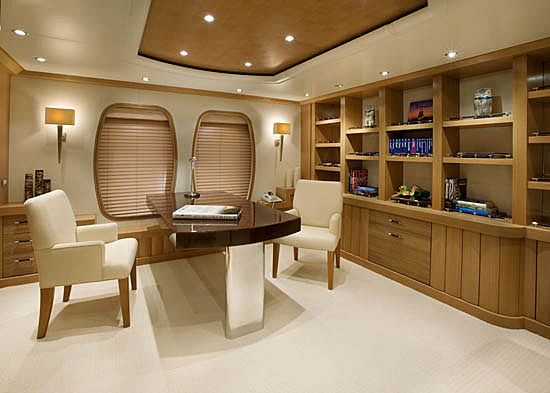 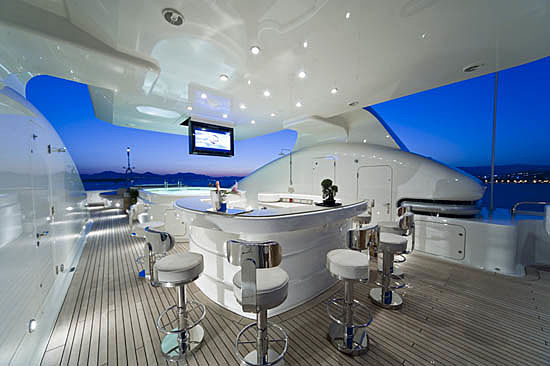 Much consideration was given to maximizing entertainment. The owners, for example, are avid film buffs and love surround-sound. So, there is a 62-inch flat-screen monitor in the main saloon that becomes a partial room divider when raised. In the sky lounge there is a large monitor, and on the sun deck near the hot tub another folds down from the mast arch. 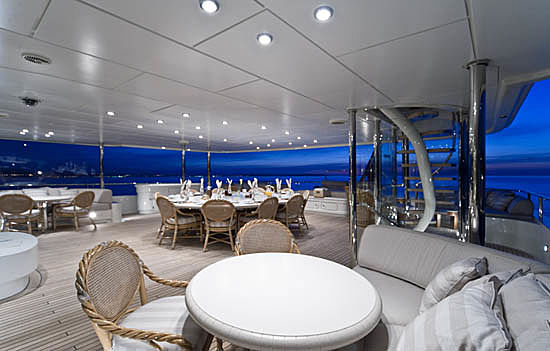 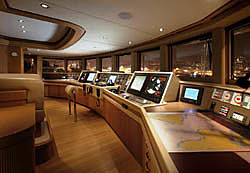 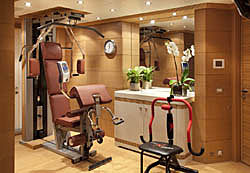 The bridge deck includes the captain’s suite, gymnasium, glass-enclosed sky lounge, fish-fighting chair, and a gangway for mooring in areas of extreme tide. It also has outdoor dining for about 30. With the main dining area seating 22 at a large oval table and two sideboards, there have indeed been 52 for dinner! 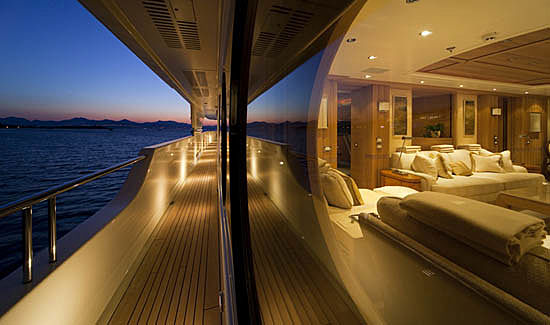 In the contemporary skylounge giant circular windows enhance the already impressive feeling of space. The lounge, informal in atmosphere, and executed with intensive use of raised and fielded light oak paneling with burled relief, features a large bar, dining/games area, and has access to the yacht’s large gymnasium. 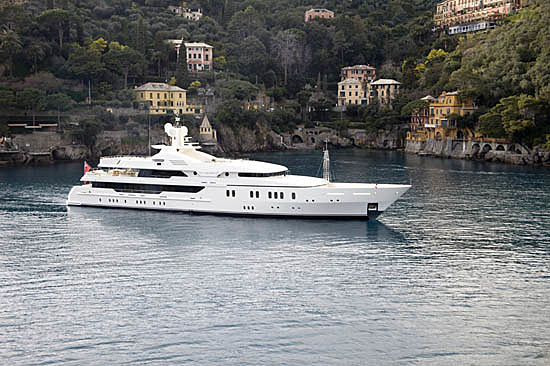 The yacht, designed as a family yacht, has several unique features, also has an inflatable waterlubricated slide, a floating trampoline, an ice cream machine, and an X-Box in every guest cabin to provide fun and entertainment, mostly for the kids.

My Shanti is built to Lloyd’s Register Class and MCA rules, with heavier scantlings, extra noise insulation, and zero-speed stabilization, all to assure tranquility. The integrated bridge has a port-side pilot station, plus five monitors for radars, ECDIS, CCTV, and operating systems, and is compliant with ISPS Code and SSA System for emergencies. 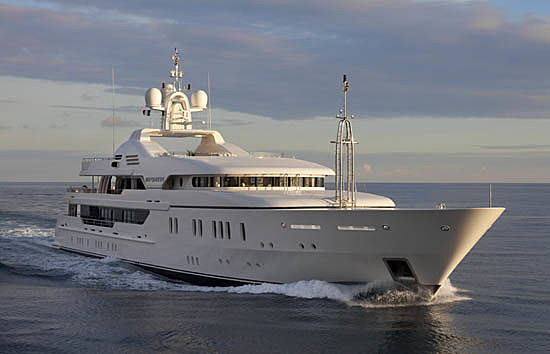 Her very experienced Captain Kenan Seginer says that she handles a gale better than any yacht he has run, she’s comfortable, takes little water over her bow, and easily maintains 14 knots. He makes good use of her inward-turning propellers, and finds her independently controlled, high-lift flap rudders give her the expected sensitivity in steering. 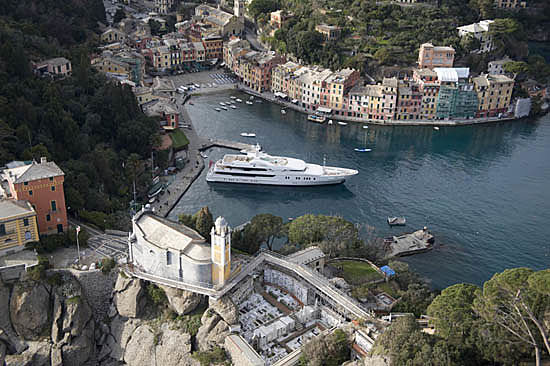 My Shanti has Hi-Fog and MCA-approved firefighting gear, and is the first yacht built anywhere with HUG filters that eliminate soot particles from the generator exhaust to prevent pollution: she will always be allowed into environmentally sensitive harbors such as Portofino. 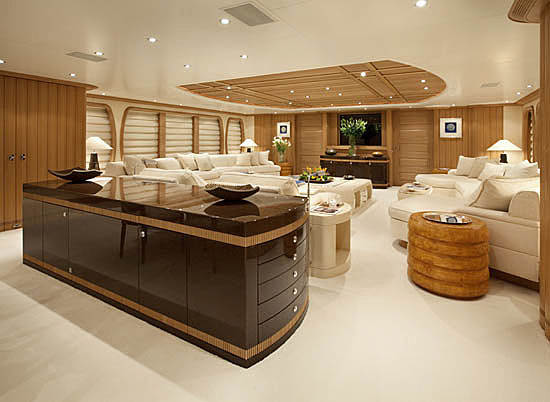 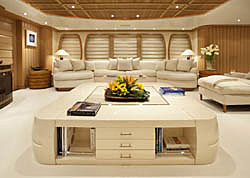 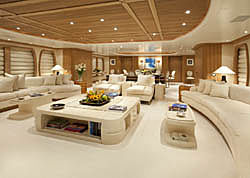 The sunny atmosphere of the interior is derived from ample use of Disdale’s favored bleached oak, neutral colors, and natural fabrics. It easily improves upon a good deal of the earlier 50-meter yacht’s decor. 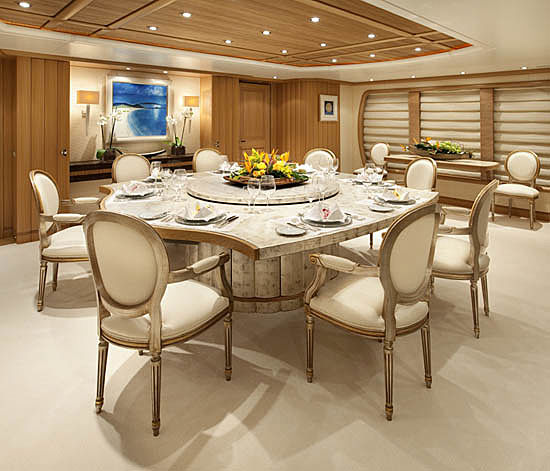 The neutral theme is carried throughout, from carpets, to wall panels, to headliners, to freestanding and built-in furniture. It manages, by its utter softness and relative uniformity of tone, to create an ambience that is never glaring or obtrusive, but that lends itself everywhere to relaxation and quiet family communication. This is Terence Disdale at his best. 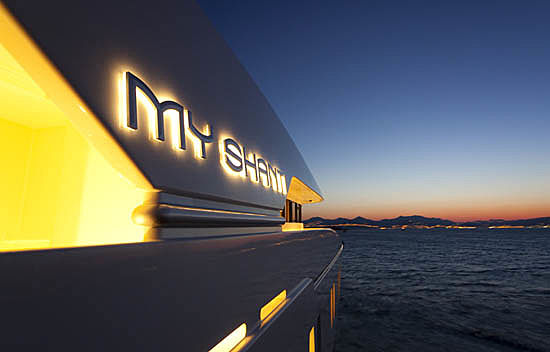 My Shanti is being offered for sale though her central Agent Merle Wood.