Delivered in 2015, Finnish shipyard Nautor’s new Swan 115 S is currently the yard’s largest production model, and the second largest ever constructed by them. Named Solleone, as a combination of the owner’s and his two sons’ names, Solleone also refers to the warmest period in the summer season, which is exactly when the 35.2 metre yacht will be cruising at her optimum throughout the Mediterranean. 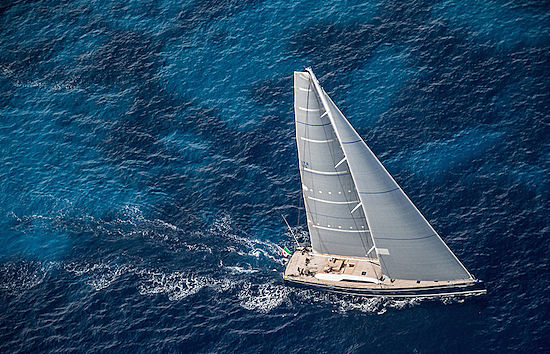 Designed inside and out by acclaimed Argentinian-based design studio German Frers, Solleone immediately gives the impression of a high-end blue water racer. The yacht is in fact designed more with cruising in mind, as the ultimate family-inspired retreat for company Chairman Leonardo Ferragamo. Nautor is currently working on the racing version of the platform, the Swan 115 FD, which will bear a more race-like exterior, with a pure flush deck (hence FD) and an even more minimalist deckhouse profile. 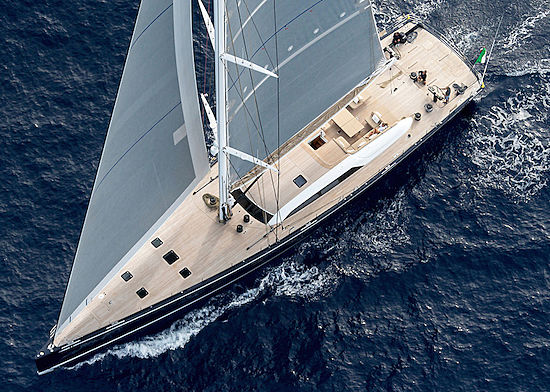 Despite her cruising nature, on-deck operations still require 5 of the yacht’s 6 crew members to stand by on deck to comfortably pull-off manoeuvres. This is partly due to the strictly functional and manual-only systems and winches that operate the various sails. The steering too is slightly primitive for a sailing yacht of this size, with a conventional chain and cable system connections the twin wheels to the rudders. Despite this, the open and uncluttered deck spaces will never have guests feeling disturbed by the presence of such a large company. 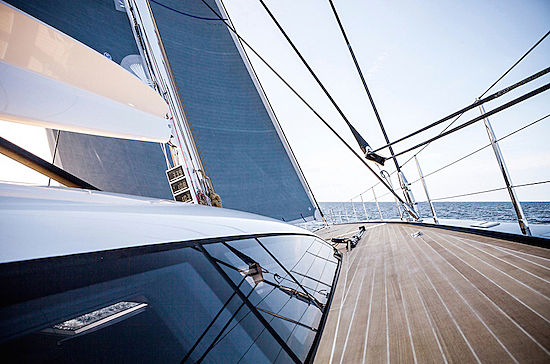 Guests can comfortably relax in the cockpit located ahead of the helm stations. Here one is treated to uninterrupted all-round views in the comfort of a large social U-shape area that is also protected from the wind by the deckhouse forward. This area has a hydraulically operated bimini structure (rises on each outboard side of the cockpit) which the crew then covers by canvas to create a lovely shaded space, ideal for lazy lunches at anchor. Part of the guest exterior spaces is the dual-opening transom which offers an easy way into the water as well as a safe tender-boarding area for shore excursions. 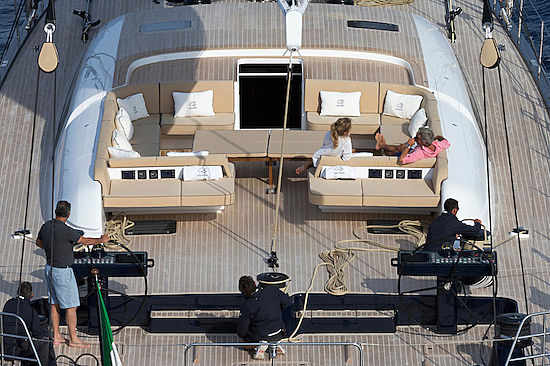 The owner opted for Italian style below deck, having drafted Florence-based designer Michele Bönan to create a sophisticated and functional sailing-friendly environment. Nautor naturally applied their advanced construction methods to put together sturdy and lightweight structure, which in turn allowed Bönan more interior space to work with. 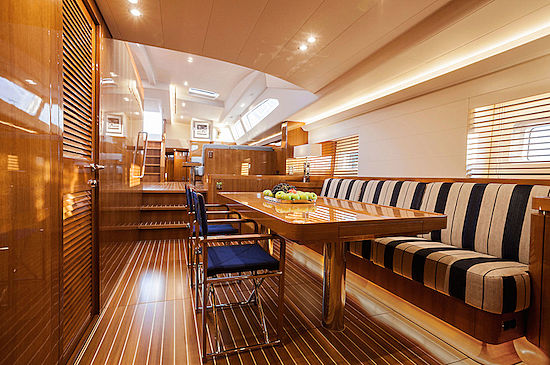 The results are clear, and on her maiden voyage from the shipyard to the Mediterranean, Ferragamo noted: “It is such a comfortable boat, and is always very quiet inside – even in rough seas. Going below was like entering another world.” 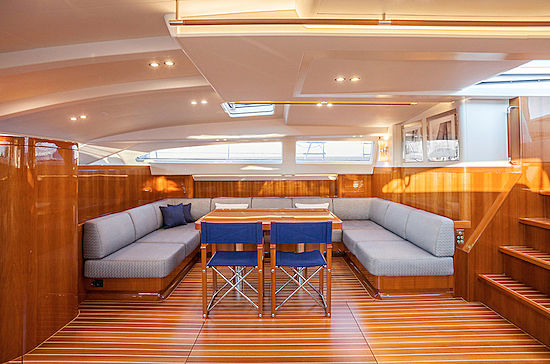 Her wide beam and long waterline length creates an almost unnaturally large feeling when wandering around the guest areas below. A comfortable headroom height and an abundance of large skylights in the deck above has one forgetting that Solleone is in fact a 35 metre yacht. White leather deckheads paired with a satin-finished teak flooring adds a classical touch to the interior, while a clever use of natural and artificial lighting adds a more modern, every day atmosphere to guest areas. Nautical elements such as blue and white fabrics can be found throughout. 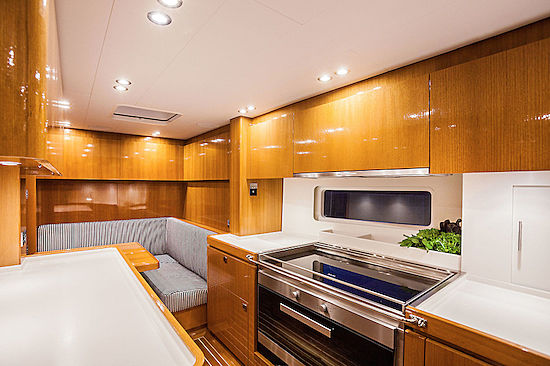 A full beam master suite is placed aft, making the most of the available space in an area less prone to the uncomfortable motions in rough seas. The bed is offset slightly to starboard to make space for a private lounge/breakfast area to port. Each of these are served by their own square skylight, which can be opened for a fresh air experience while underway in fair weather or at anchor. A surprisingly large en suite bathroom is placed aft of the bedroom, with wash basins for him and her. 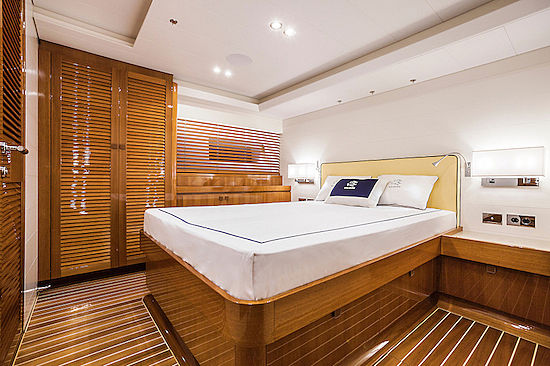 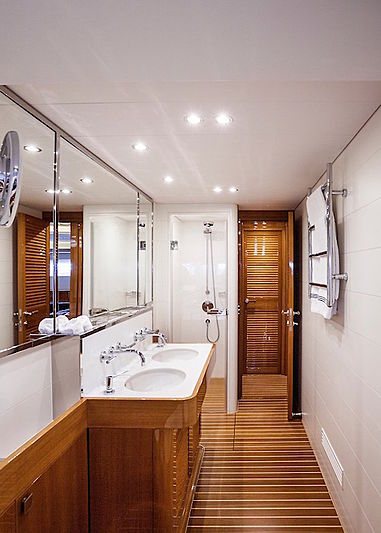 Forward of the master suite located on either side of a central passage are two identical twin cabins. These functional spaces are perfect for the youngsters on board and offer a bright and comfortable space to retire after a fun-filled day on the water.

Past the raised saloon, forward, is a double cabin to starboard. Directly adjacent to this, to port, is an extension of the saloon in the form of an informal dining area where guests can enjoy early morning breakfasts, or late night dinner experiences during unfavourable weather. 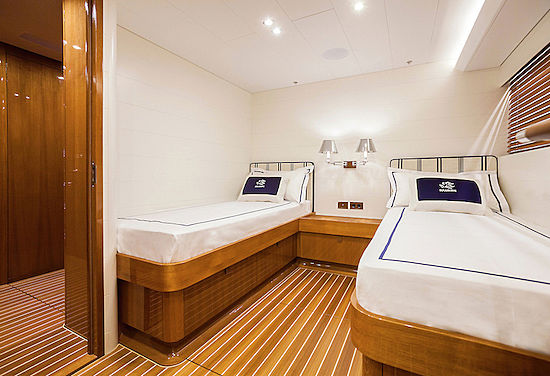 The fact that first Swan 115 S is aimed at a cruising lifestyle, does not mean she is limited in her sailing abilities in any way. In a following sea the yacht’s captain recalls reaching a top speed of 25 knots while surfing down a wave and notes that speeds between 14 and 17 knots are often hit during cruises. 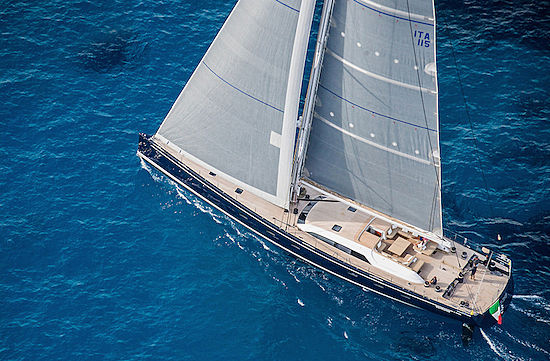