With the delivery of Ngoni, Royal Huisman once again proved themselves worthy as a world leader in the creation of custom super sailing yachts. Unlike anything to come out of the Dutch shipyard’s sheds, Ngoni carries a one-off stamp never to be repeated in the industry. An example of world-class design, fine craftsmanship and intelligent engineering with this Beast, what you see is what you get: pure, raw, unrestricted power.

What has become a brand in its own right as a result of the extreme interest received by sailing enthusiasts around the world, the name Ngoni may originate from a world completely opposite to that of the the luxury yachting scene, but at the same time perfectly carries the identity of the ship and what she is about. Taken from the Nguni clan’s members today residing in south-central Africa, these tribes were known for their fierce warriors, brute strength and cunning tactics out on the battlefield – all of which are personalities that have been engrained in Ngoni’s personality through her all-star build and design team. 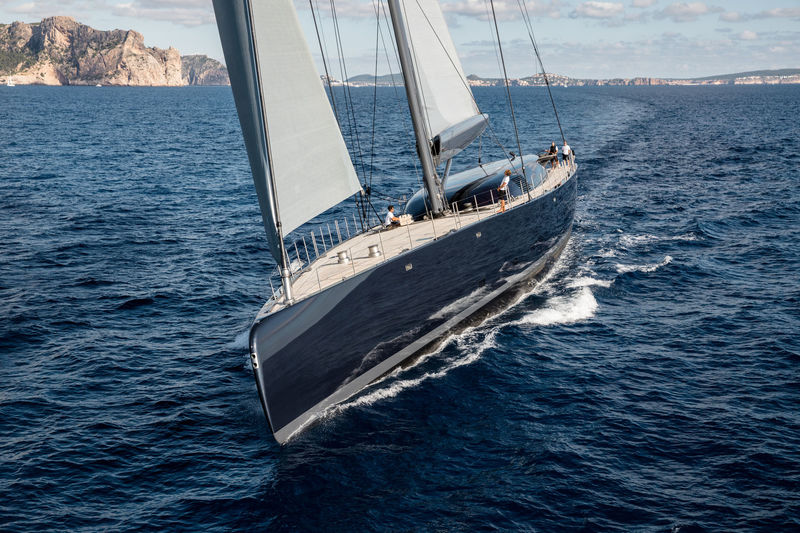 The design itself is one that will be envied by other owners for the rest of time. As Ed Dubois’ last work, the yacht represents a special significance for anyone lucky enough to have met the biggest name in super sailing yacht design and an individual that has been paramount to the advancements made in this field of luxury yachting. Certainly one of his most daring designs - together with the 66-metre sloop Aglaia (now Anatta) - Ngoni demands attention no matter from which angle she is viewed. 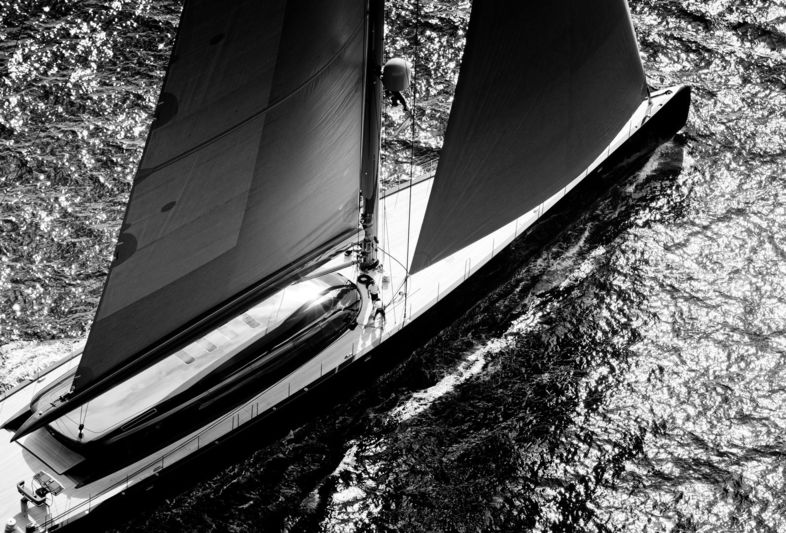 Along with Royal Huisman and Dubois Naval Architects, the remaining build team members include long-time captain and owner’s representative Lain Cook and project manager and former America’s Cup sailor Godfrey Cary. With a combination of valuable owner experience and race-course know-how, these two served as the tip of the Ngoni spear during the build operations while working with the experienced Royal Huisman team. 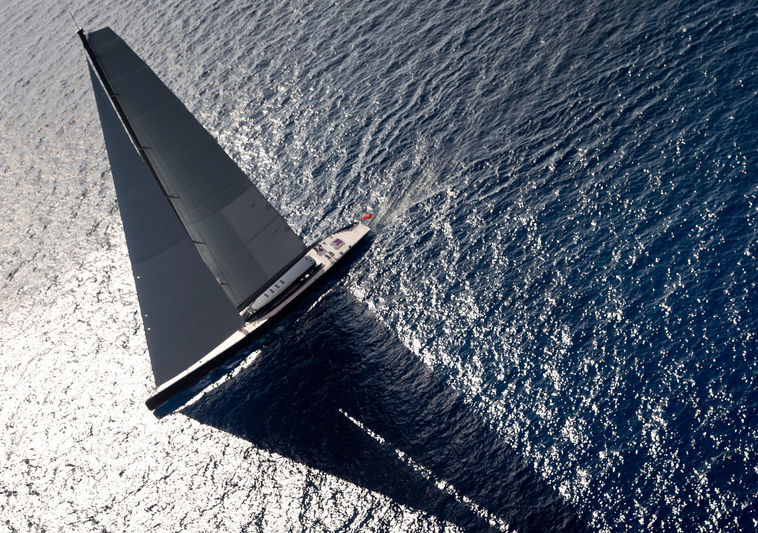 For the interior of the project, the owner’s go-to custom furniture design house, Rick Baker Ltd was given an opportunity that put them in slightly deeper waters than what they are accustomed to. As Rick Baker and Paul Morgan’s first superyacht project, the team was given the task to design the interior of Ngoni according to the layout provided by Dubois and Huisman. The British studio rose to the challenge and finished guest spaces with a high level of luxury in a fun and quirky way set to match the contemporary style of Dubois’ exterior. 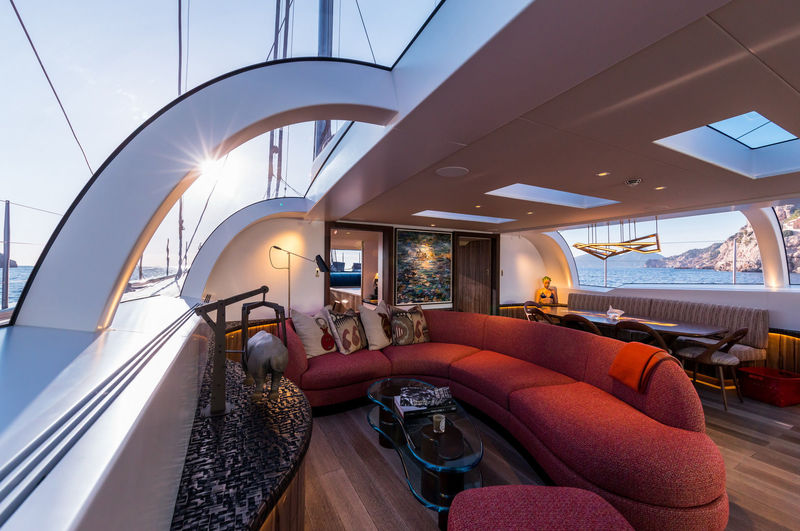 In many ways, for all involved in the project, Ngoni was a balancing exercise in realising the experienced owner’s vision. Racecourse performance with long-range comfort, high-tech components that are reliable and low maintenance, a sleek design with plenty of hidden storage and added amenities – it all came down to the expertise of the respective engineering and design teams with a little bit of real-world advice from the project management side to make it all work. 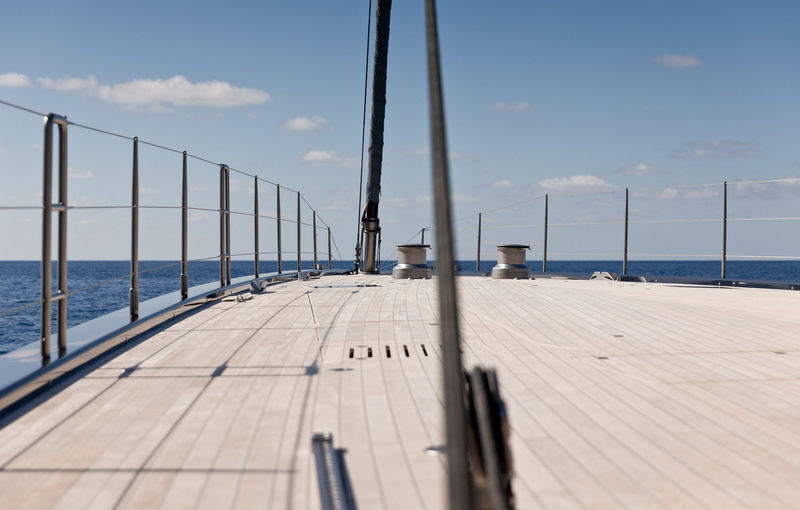 Not forgetting the beautifully sculpted double-curved glass deckhouse or stylish swept tail transom, the single most distinguishing feature of Ngoni’s exterior has got to be the reverse sheer of the bow which not only acts as an ultra cool styling feature but, as the Dubois team found out during initial structural analysis, provides increased strength to this vulnerable part of the ship. This vital boost in rigidity gave the naval architects and designers the confidence to cut several large hull and deck openings and mount a 75-metre-high carbon sloop rig on such a slender hull whilst keeping everything in position and performing at its peak at any angle of attack. 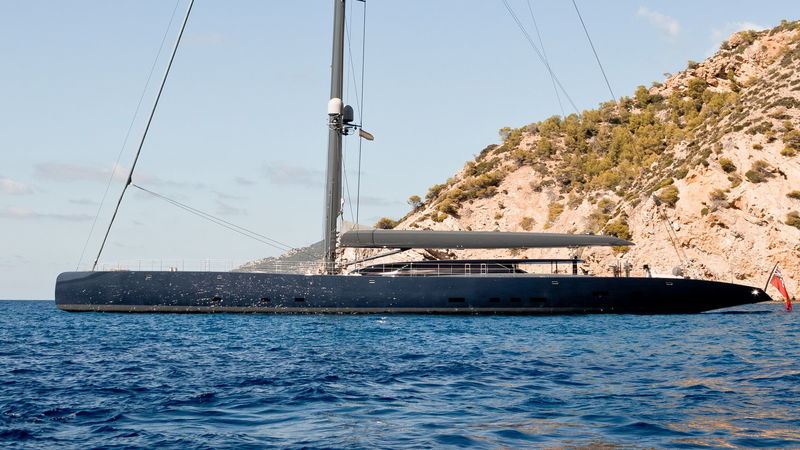 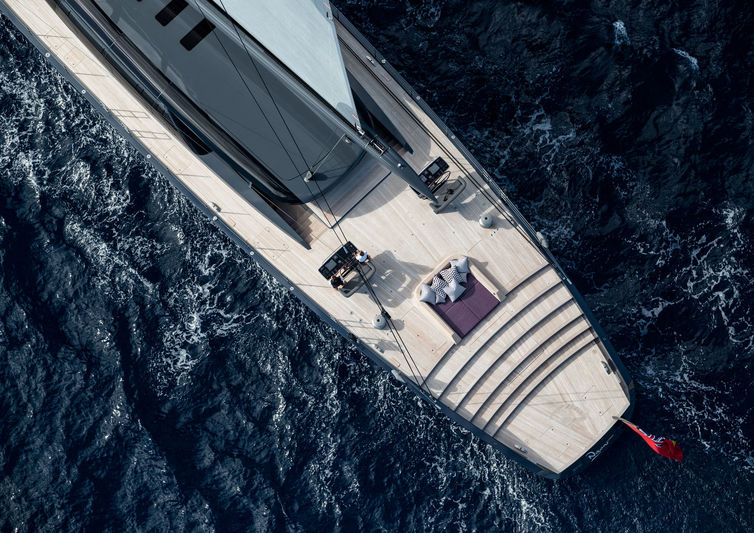 Controlling such a beast requires precision and that is exactly what her crew have at their disposal via each helm station. Pieces of art in their own right, from here Ngoni’s crew have look out over a clean deck and low profile deckhouse with excellent visibility over all manoeuvres on deck and any surrounding boats in the water ahead. Dangling just above is the 24-metre performance furling boom with a curved tail that echoes the style of Ngoni’s curved stern. 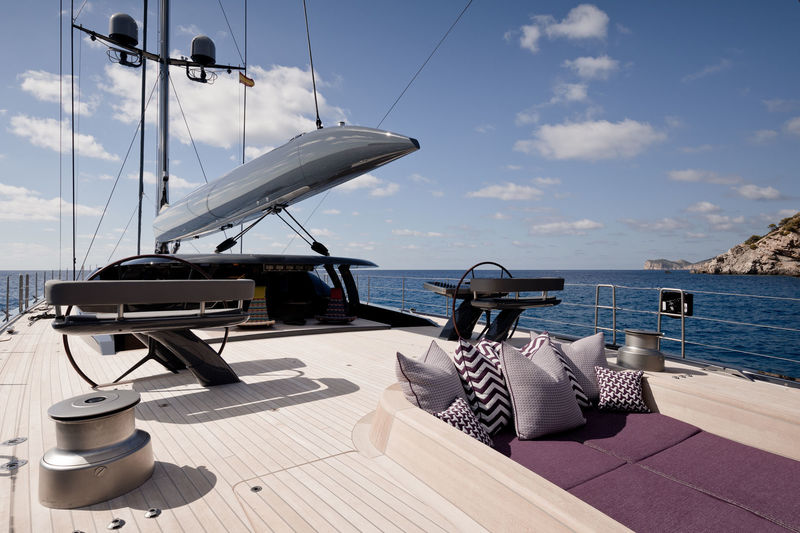 In addition to a comfortable aft-facing seating space in the aft cockpit, there is a spa pool on the foredeck along with another large deck opening where Ngoni’s tender is stowed in. 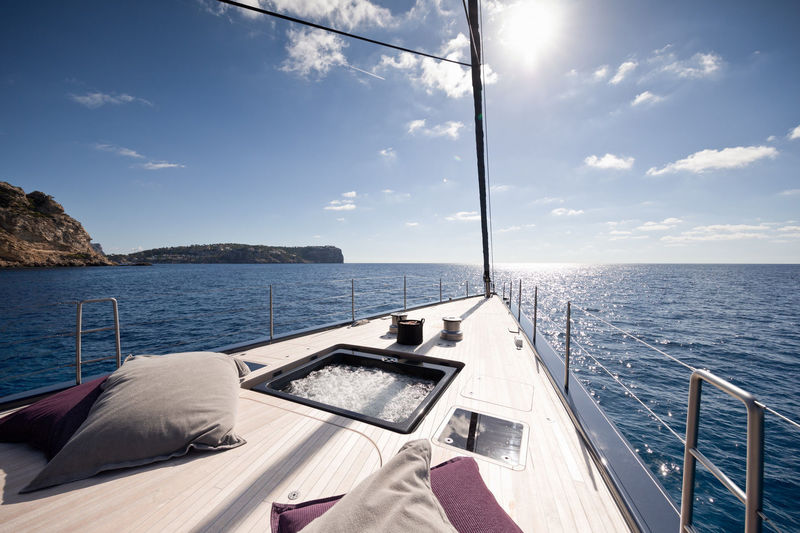 The sunken main cockpit provides a stylish sheltered retreat from both the sun and wind and becomes the perfect hideout for those looking to be outside when underway. Small retractable sliding glass panels close the gaps between the deckhead and superstructure to create a wind-free area for dining at anchor. 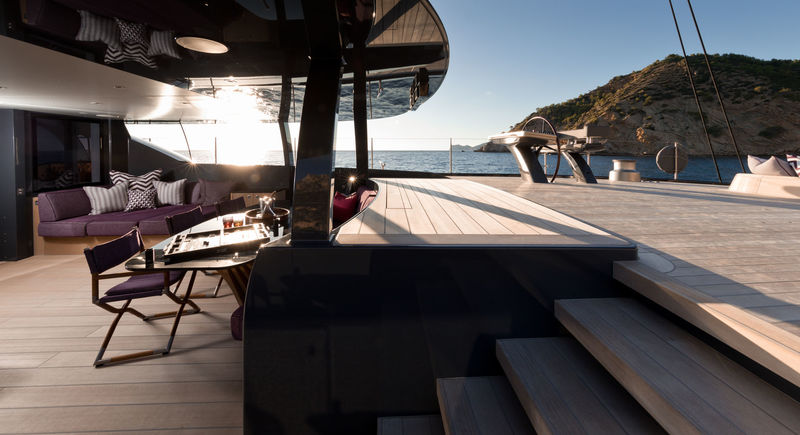 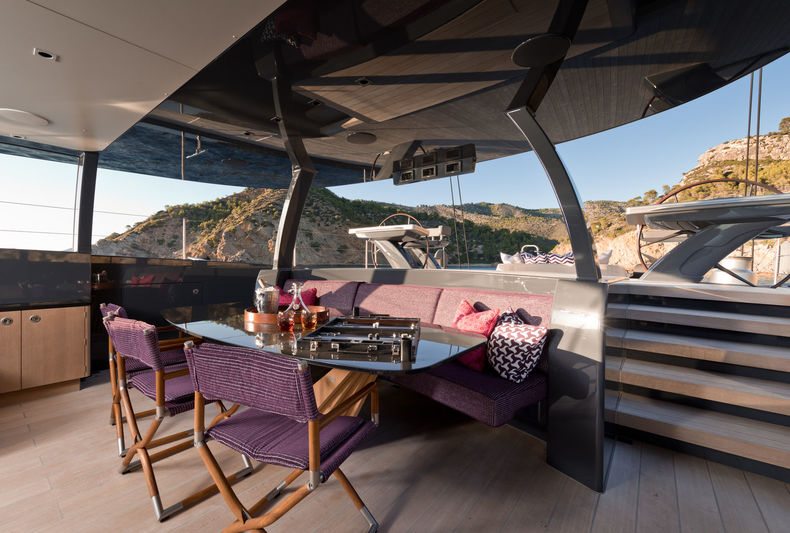 Moving into the saloon, one notices the single-level entrance that is revealed as the glass doors slide open. No toe-bumping or head-hitting obstructions here, just one uninterrupted inviting space that looks over the salon, past the observation lounge and onto the foredeck. 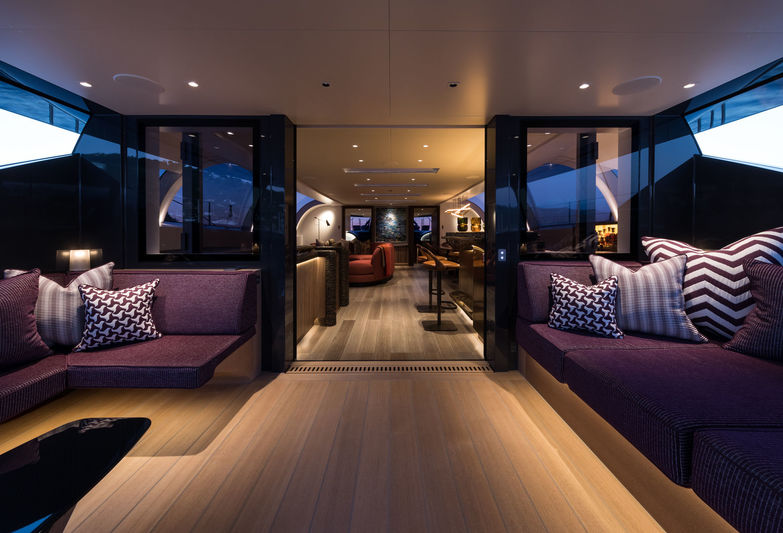 The masculine style of the interior is offset by the gentle curves of the surrounding glass windows and touches of vibrant colour which becomes even more apparent as one heads below deck. “The use of vivid resins, combined with sculpted metal surfaces, was to give an overall fluid feel throughout, however, each area was to retain its own design identity,” comments Rick Baker. 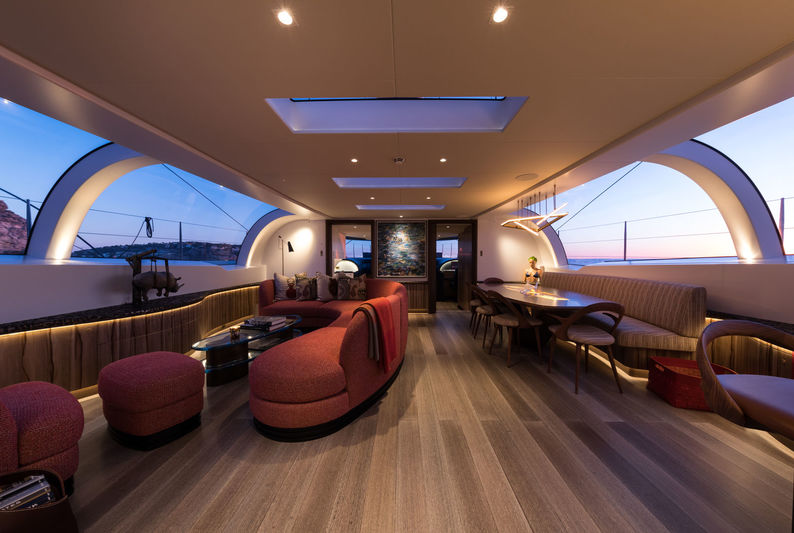 Skylights in the deckhouse create a dramatic scene as the soft sunset light filters through. 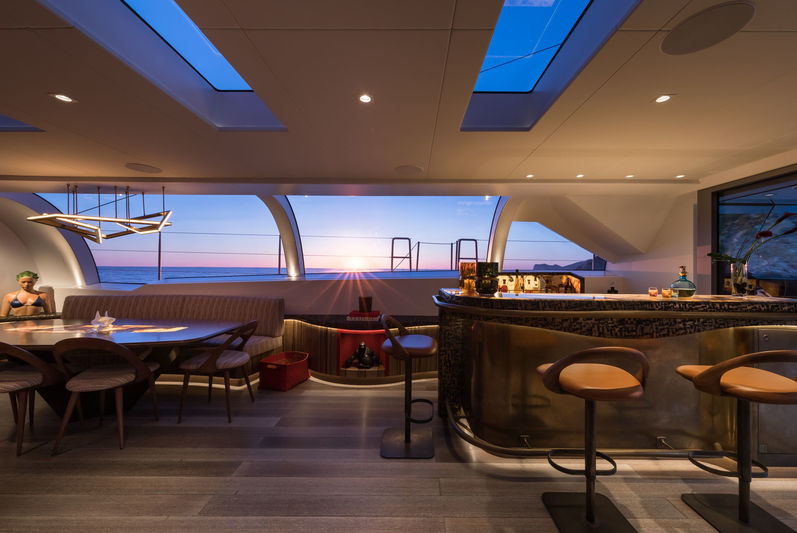 A central spiral staircase to port leads down to the accommodation deck where a full beam master suite, a twin and a double guest cabin awaits. The owner’s brief asked for a flowing and curvy interior that did not conform to traditional standards. Rick Baker’s approach to the process hit the mark with an abstract, yet functional, use of space. Royal Huisman’s in-house team of craftspeople gave life to this design from manufacturing to assembly and detailing. 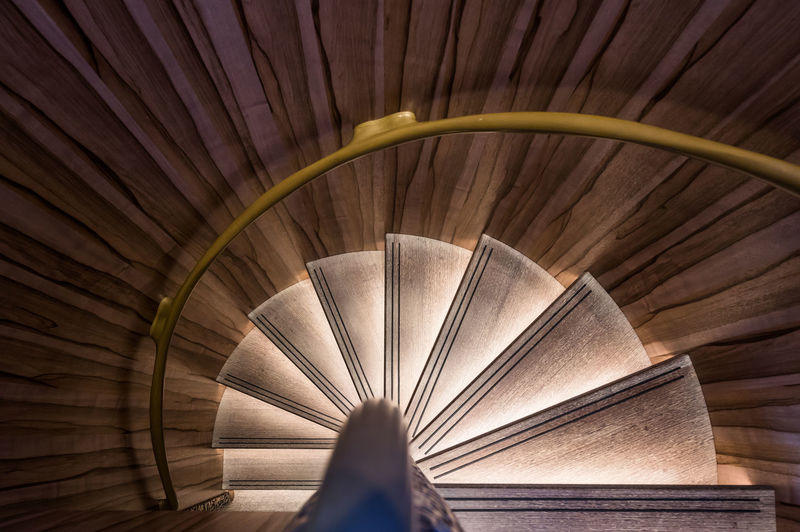 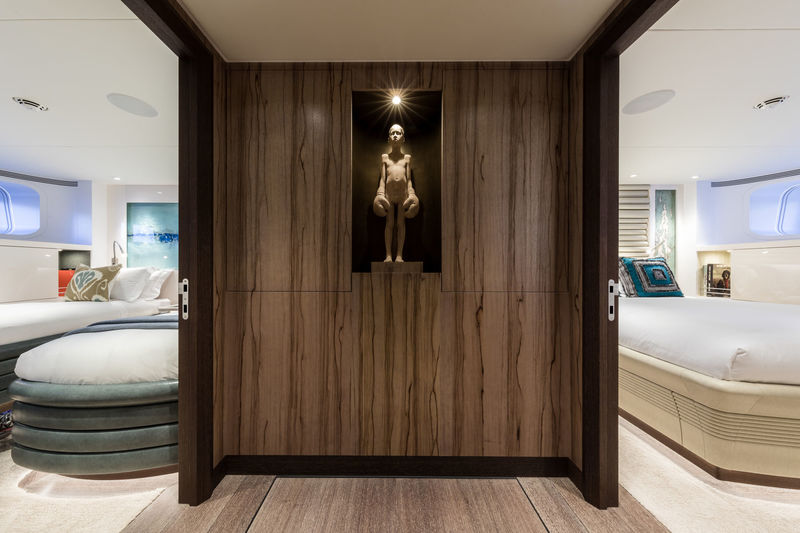 Photo: Jeff BrownThe master suite, located right below the two helm stations, has its own private staircase to starboard and puts the owner in the heart of the action on deck at a moment's notice without having to pass any guest spaces. 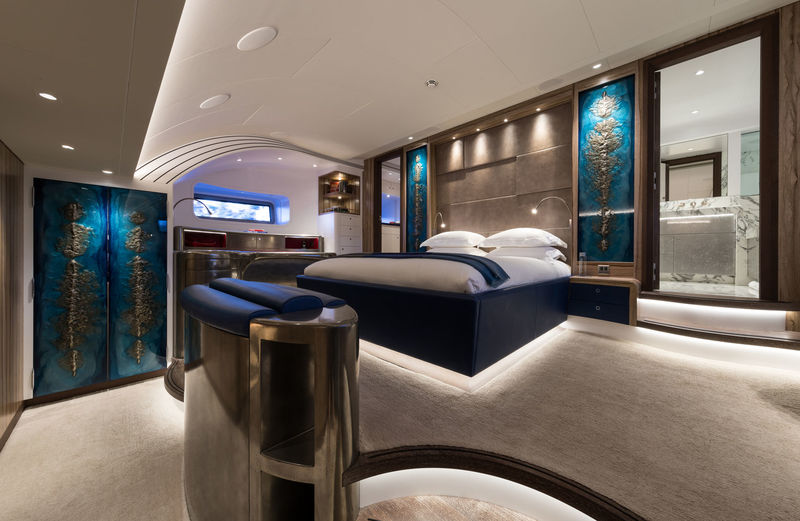 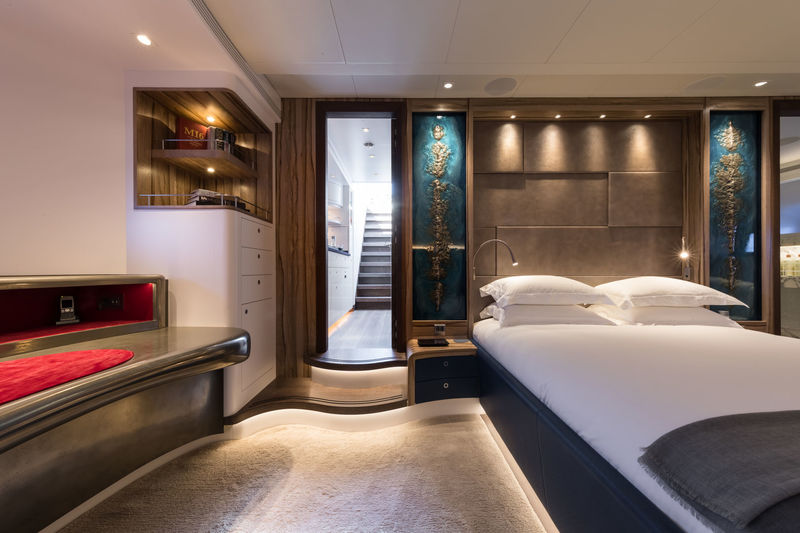 Separating the master suite and the two guest staterooms is a private study area to port and a workout area on the starboard side. A large eye-level porthole provides fresh air during workouts and a stunning view during an early morning rowing session. 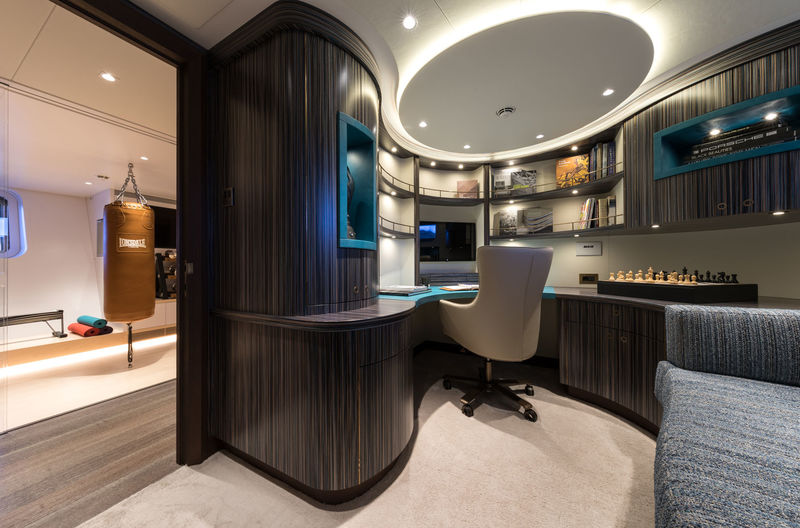 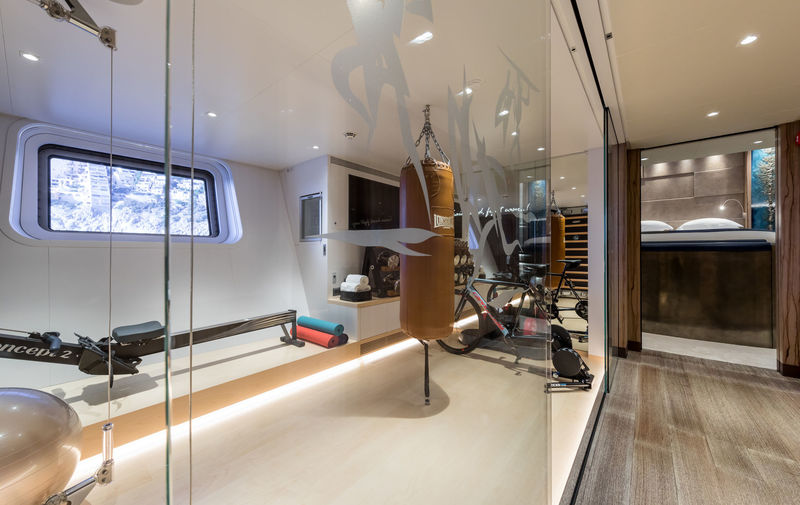 As guests get ready to depart the yacht for a fun night on the town, Ngoni’s crew easily prepare a side boarding platform that is connected to the deck via a self-levelling passarelle. 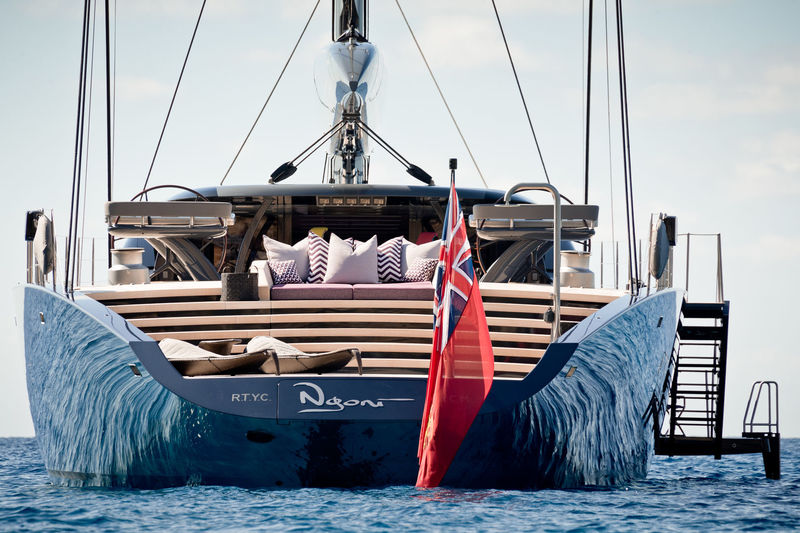