Renowned 20th-century architect Louis Kahn once said that “a great building must begin with the unmeasurable, go through the measurable means when it is being designed and in the end must be unmeasurable.” The same can be said when it comes to constructing a great superyacht like Oceanco’s latest delivery, the 90-metre DAR. Kept tightly under wraps until her grand debut at this year’s Monaco Yacht Show, the superyacht features some of the latest advancements in glass technology - even though her innovative exterior styling was first penned by designer Luiz de Basto eight years ago. “I’ve always been interested in the use of glass on yachts as a way to improve our views and contact with nature,” recalls de Basto. “The first initial sketches for DAR were done in the first week of October 2010, and featured those iconic glass windows from the very beginning.” At the time the concept was considered futuristic, and not very attainable but with time and the right yard, DAR became a reality. 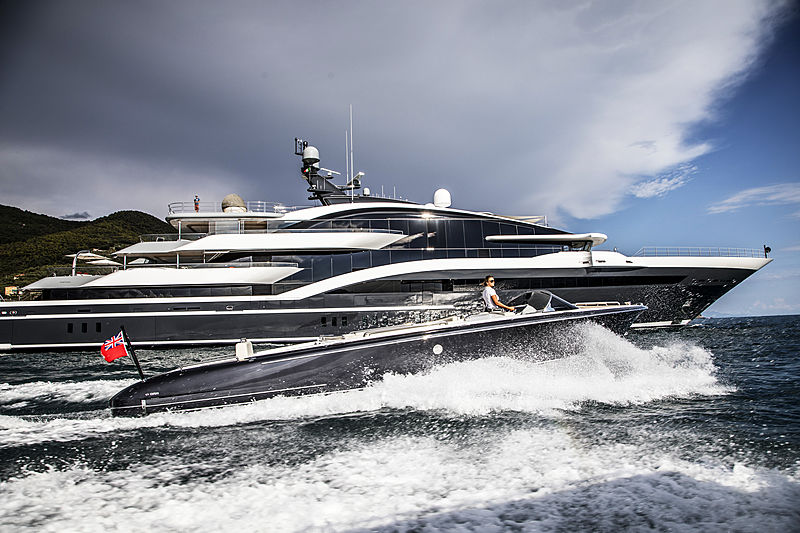 Photo: Franscisco MartinezDubbed Project Shark during her construction phase, her curved wing stations bear a distinct resemblance to a hammerhead shark when viewed from above, while the mast in profile is shaped like a fin. However, although DAR’s unique bio-design may have been influenced by nature, her intricate construction is entirely man-made. As the first yacht in the Netherlands to feature the official Lloyd’s Register Integrated Bridge System (IBS) notation and designation, the project team at the Dutch yard worked very closely with the owner’s team and designers throughout the build process to ensure her owners' vision was successfully realised. “Creating DAR with the designers and owner’s team was a cohesive experience," says Oceanco. "It is said, ‘Design is the detail’, and with the collaborative approach by everyone involved and an enormous amount of hard work, we achieved a unique yacht." 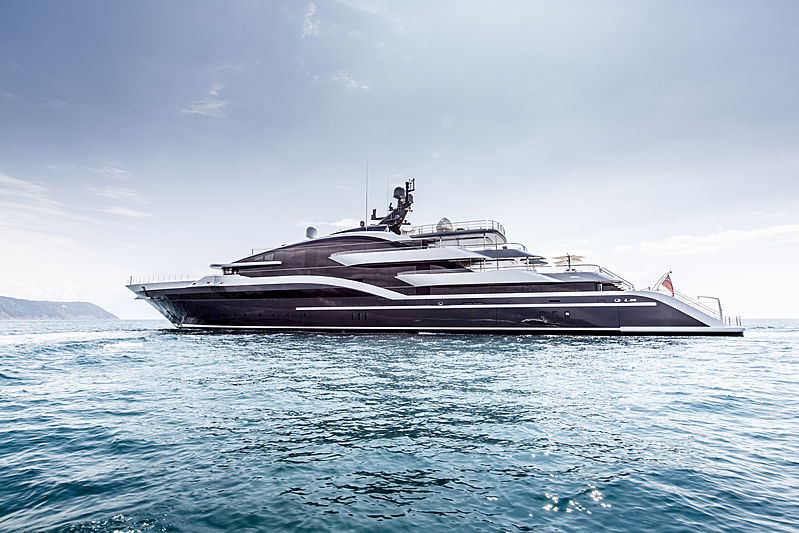 Photo: Franscisco MartinezOceanco and the team ensured they remained on track through each phase of her building process, delivering DAR within 33 months from the keel laying. Her streamlined construction process, which saw her custom interiors sketched out, constructed and installed on board in just two years, was reflected in the owners' reaction upon setting foot on board for the first time. "The owner’s wife was very happy the first time she went onboard after delivery - she just stunned," says Valentina Zannier, chief interior designer and junior partner at Nuvolari Lenard, the studio behind DAR’s interiors. She admits she was given a lot of freedom on this project - a decision which certainly paid off in the end. "The owners have asked me to help them design other interiors for other spaces - which is really special. When this happens it makes you feel like you really struck a chord with the client,” she explains to us at the Oceanco lounge during the Monaco Yacht Show. 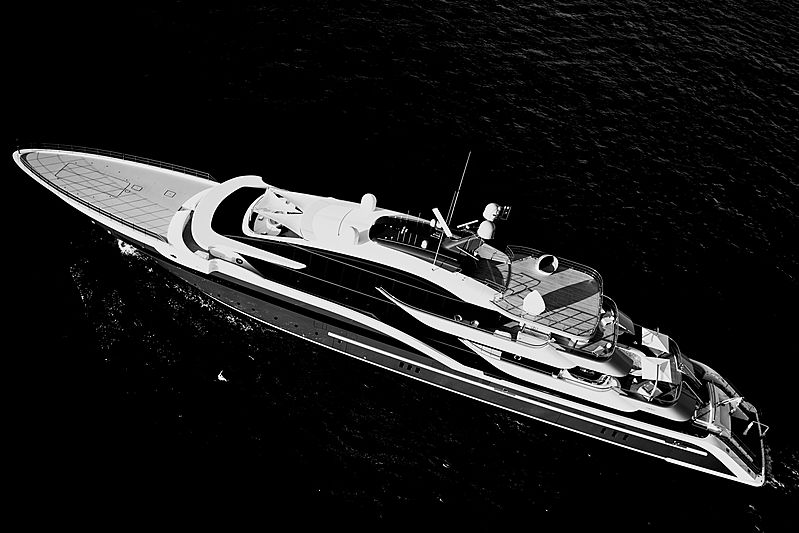 Photo: Franscisco MartinezHowever, the owners' delight upon DAR’s delivery comes as no surprise considering her innovative design. Winning both the Best Exterior Design and the Finest New Superyacht Award at the Monaco Yacht Show this year, DAR was honoured by a visit from Prince Albert II himself. After visiting the groundbreaking superyacht in person, SuperYacht Times takes a closer look at some of the key features of DAR’s design.

One of DAR's main standout features is her aluminium superstructure, which is completely finished in reflective glass and offers panoramic floor-to-ceiling views aft, port and starboard. DAR’s exterior design strikes a fine balance between de Basto’ s own aesthetic sensibilities and the technical advancements of yacht construction, leading to the perfect combination of art and technology, according to the designer. While sketching out a unique yacht is one talent, the complexities behind the execution of building a glass superstructure are another. “There are no frames, the superstructure is clad in glass on a moving yacht which is subjected to extreme structural conditions,” he says. But together with the team at Oceanco, de Basto worked on the engineering of the glass-reflective superstructure. The end result sees 400 square metres of glass being glued to the structure, without the use of mechanical fasteners - an operation which required a very high level of precision. 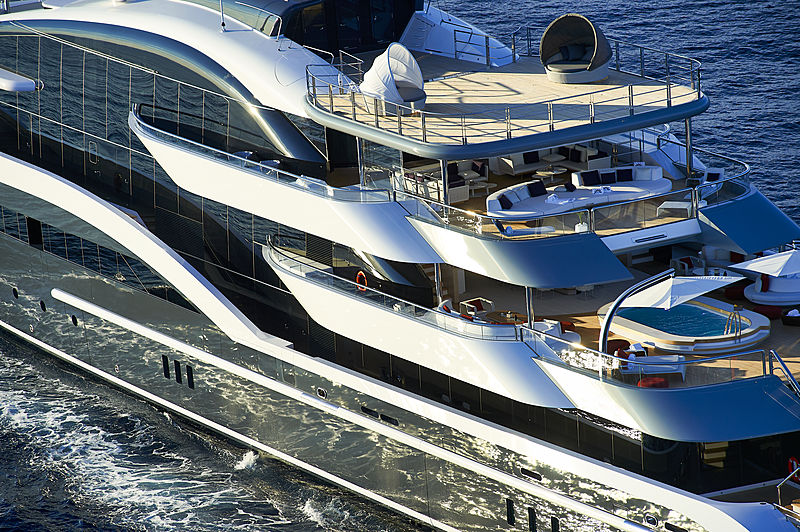 Photo: Franscisco Martinez“From a technological point of view, this use of glass is unique in yacht construction and advances the limits of what’s possible today. It’s the result of a coordinated team effort only possible at a shipyard with an engineering team like Oceanco,” continues de Basto. “As a designer and architect, my job is to create new ideas, propose many alternatives and qualify them. The shipyard’s job is to quantify and built them and that dynamic worked very well.” However, that is not to say that constructing DAR’s exterior was without its challenges. In addition to installing the glass, it was no easy task finding the right type of glass to use for both the exterior and interior. “We went through three different colours of glass, also darker ones and lighter ones,” notes Zannier. Together the design teams went over the possibilities, with de Basto focusing on which glass would work best for the exterior, while Zannier worked from the inside to see which glass would complement the interior best. The final glass selection is dark enough to match the black paint on DAR’s exterior and opaque to the point that someone standing outside of the owner’s private deck cannot see into their bathroom. At the same time, it also transparent enough flood the same bathroom with an abundance of natural light. 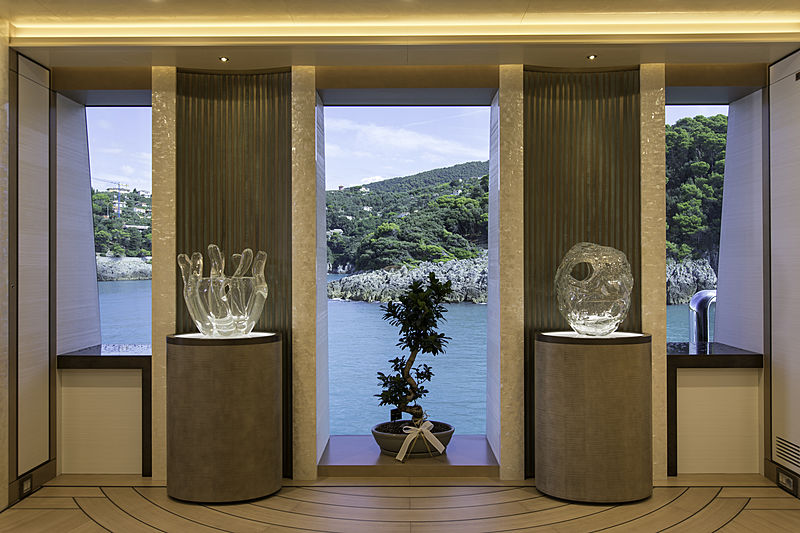 The contrast between light and dark is evident throughout DAR’s design, as is the exterior's design matching the interior perfectly, especially since there are no walkaround decks. This is partly because both share the key inspiration of nature, something which is clearly visible throughout her interiors. “The owners asked me to bring nature on board, and this is reflected in the motifs, such as blossoms, branches, feathers, leaves and fish throughout the different areas of the yacht,” explains Zannier. For example, the wellness and spa area of DAR on the main deck is adorned leaf motifs, which are embossed onto the light floor panelling and her walls. Moving through her main deck, the leaves motifs give way to cherry blossoms accents going into the lounge, as seen on the metal panel behind the bar. “You can feel when the design fluidity is there,” continues Zannier. 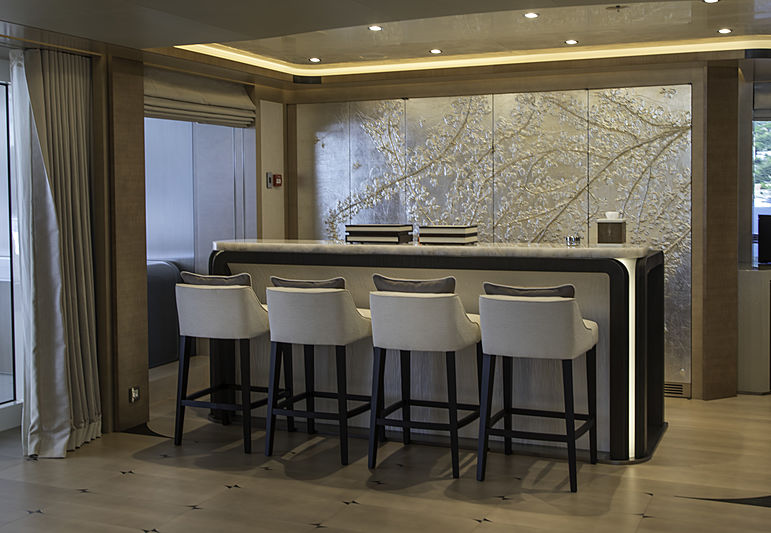 Photo: Oceanco“But the secret to the success of the interiors is that we kept it light.” Although one may find it hard to imagine how light DAR’s interiors really are - especially when you consider the amount of dark glass use - Zannier was able to create a contemporary, light and bright interior design which feels welcoming and luxurious at the same time. The interior designer attributes part of this success to the owners' decision to steer away from the presence of dark, heavy wood onboard of DAR. Instead, she used multiple types of lighter woods throughout the interiors, such as bleached grey maple for the floors, sycamore fiddleback for parts of the panelling and tinted Brazilian Carabello wood for the small, rich details. “You can see that the nature of the wood is the same across the yacht, but it is treated differently. The use of metal is also consistent throughout all the decks, as is the attention to detail.” 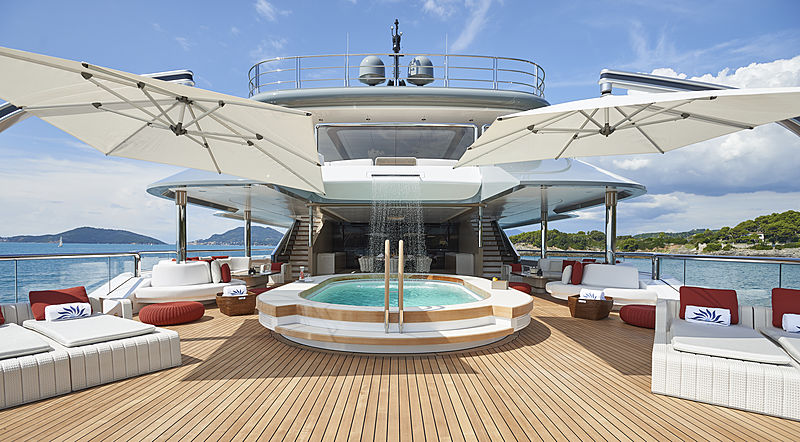 In order to ensure that DAR truly fulfilled all of her owners' expectations, the team at Oceanco, together with de Basto and Zannier also had to think up a few custom solutions for certain aspects on board. For example, de Basto wanted to fit a very large sunbathing area on the owner’s aft deck, which takes up a lot of space. In order to ensure the space offered them more flexibility, de Basto created a 360-degree rotating sofa, with the main mechanism in the centre. “We didn’t want to see any tracks or interruptions on the teak deck when the sofa was not centred,” explains the designer. The al-fresco table on the same deck also features a centre detail which can be lowered beneath the rest of tabletop to create space for ice, champagne, wine and caviar. Controlled through the touch of a button, this detail is watertight and is fitted with a drain that goes through the deck for easy cleanup, as well as an LED light for a glowing, rich effect. The helideck stairways also feature an articulated hatch, which when lowered into position matches the complex curved shapes of the superstructure, while preventing wind and water from intruding onto the owner’s deck.

“The owner had the vision and he trusted us all to translate that vision into his perfect yacht,” adds Oceanco. “This guided our decision making and the energy the team brought to problem-solving ensured solutions were not only practical but beautiful.” When it comes to the interiors, some of the main components, such as the details in the corridors and central staircase proved to be the most difficult to realise, says Zannier. ”Believe me, the staircase and the corridors are the two most difficult areas to decorate on a ship yacht because they are passageways, but you have to make them pop with the rest of the interiors.” Zannier ensured the staircase design flowed with the rest of the interiors with the addition of fish and sea life embossing on the lower part of the wall, paired with the continuation of curved metal decorations on the handle and stairs. In addition, ensuring the staircase flowed with the central lift was also no easy task. “It looks nice, but behind it, all lies an extremely difficult construction process because you are building a moving ship vessel at the end of the day, not a house,” she points out.