Having been launched in 2005, over the last 12 years Polar Star – with her striking blue hull, white superstructure and robust, yet elegant exterior – became an instantly recognisable sight for many around the Mediterranean and Caribbean. It then came as a surprise to many to find this icon be revealed after a six-month Spanish refit not only with an extended waterline length and brand new interior style and layout but now sporting an entirely different light sand coloured paint scheme. We find out how the refit team behind this Lürssen superyacht managed to retain her individual style while turning the Polar Star image on its head. 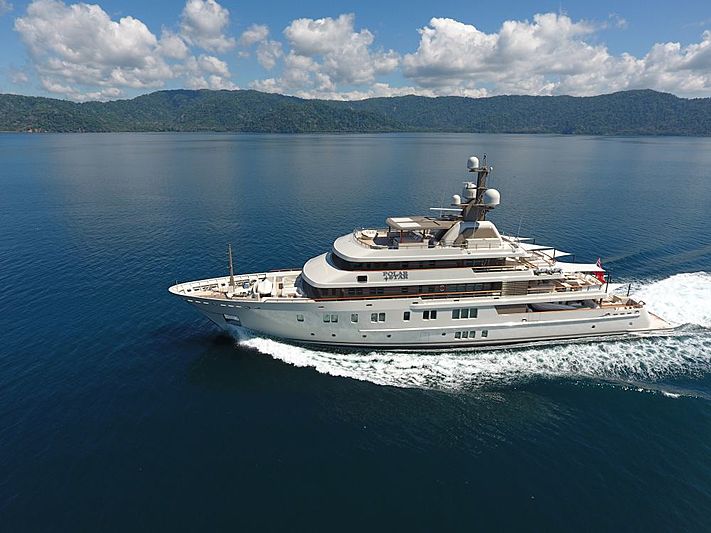 Polar Star arrived in Barcelona’s MB92 refit centre in January 2016 where she remained until July that same year. Over a period lasting a total of nine months, an experienced team, lead by Master Yachts featuring design studio FM Architettura d’Interni (FM), Espen Oeino and MB92, were tasked with transforming the owner’s beloved yacht to suit their new cruising needs. Gone is the traditional gentleman-like paint scheme and traditional French countryside interior, and instead, a contemporary, elegant and easy-going lifestyle has taken over the yacht we know as Polar Star. 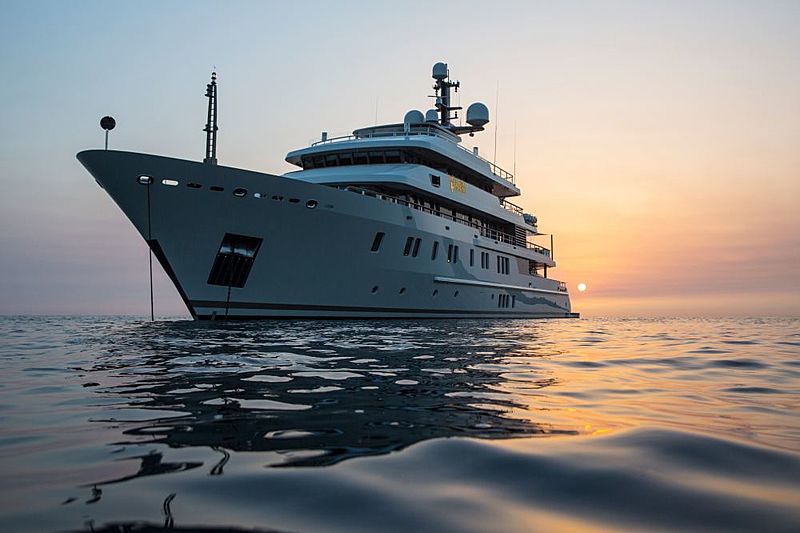 “The owners were very clear: they wanted their yacht to feel more in tune with the ocean,” comments Maria-Silvia Orlandini and Francesca Muzio of FM. A new theme of complete serene elegance, inspired by the beauty and simplicity of the marine environment is what guests can look forward to. 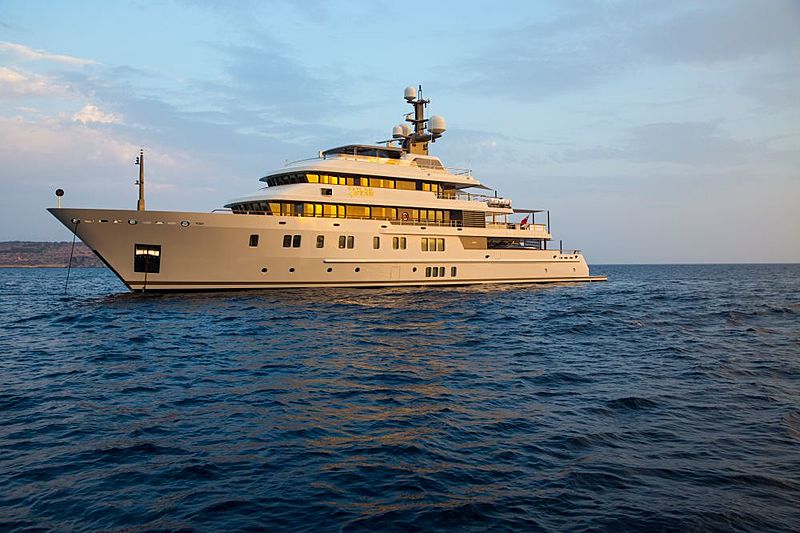 As one approach Polar Star from astern by tender, one of the first new features that becomes noticeable is the new extended swim platform. Not having a fold out transom door through which to expand beach deck space with, Polar Star’s once narrow fixed ledge meant guests were either on main deck aft or inside the tender, with very little room in between. The new 3-metre long extension gives far greater manoeuvrability for guests and crew during transfer operations and now event offers the opportunity to safely sunbathe at the water’s edge. 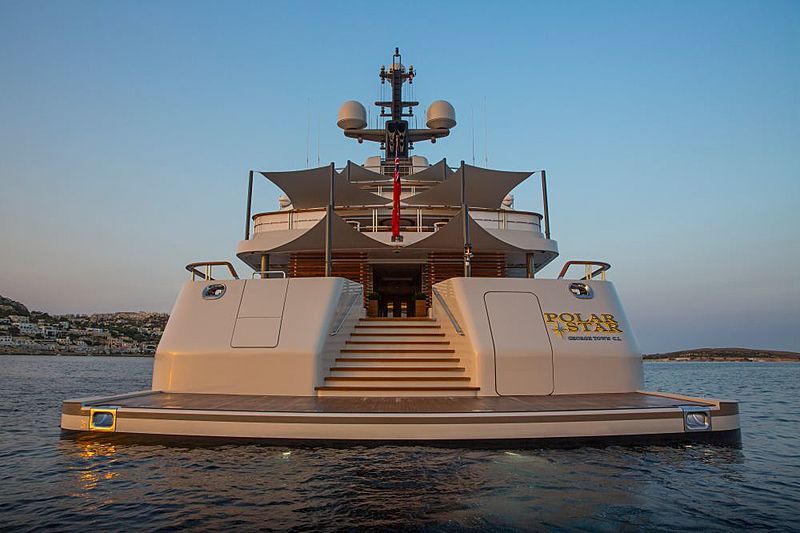 Moving up to the main deck via the grand central staircase, guests are greeted with a newly configured sun lounging space with added separation from the forward area of the deck that houses jet skis and two tenders on deck. A central passageway leads you past these technical areas and into the main saloon. 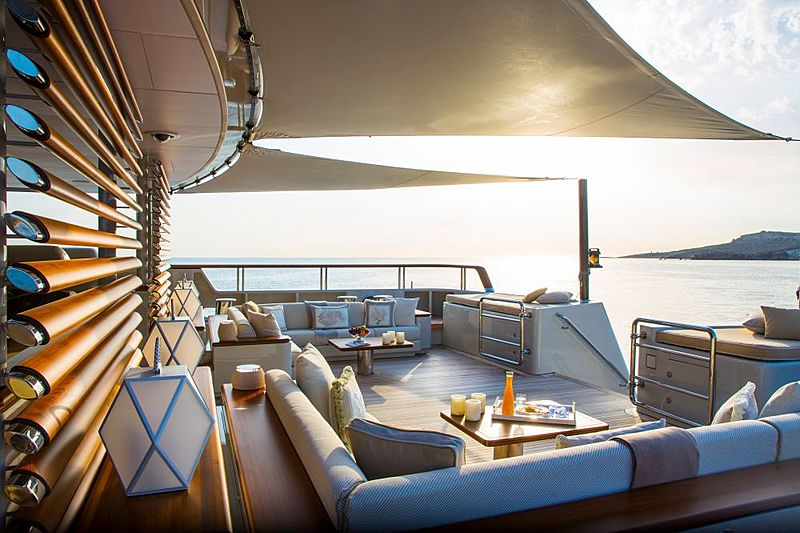 It is here where one gets a first taste of what Polar Star’s new interior is all about. Light silver grey is used as the base of all the new guest areas and allowed FM to experiment with subtle accents of nautical tones and metallic surfaces without disrupting the flow and ocean side retreat feel onboard. A comfortable lounge area on the starboard side is where guests can lay back after selecting any of the books on display in the custom made leather book case. A mosaic-tile decorated corridor leads forward to the guest cabins. 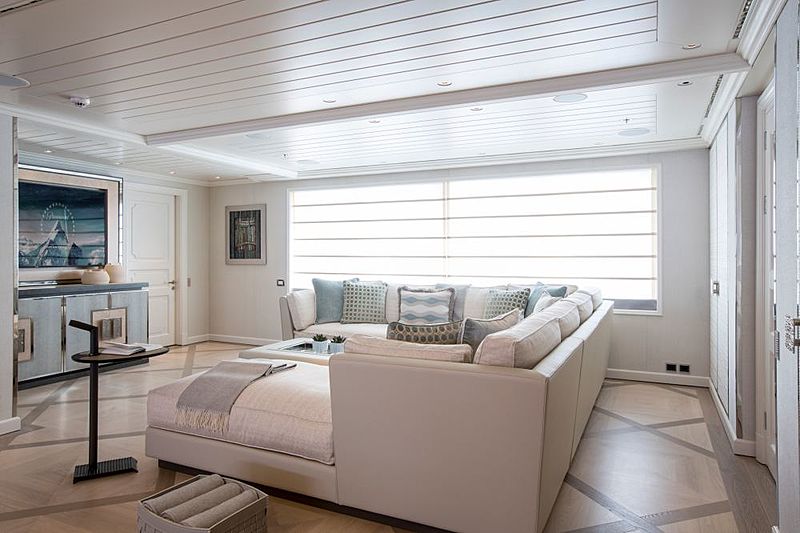 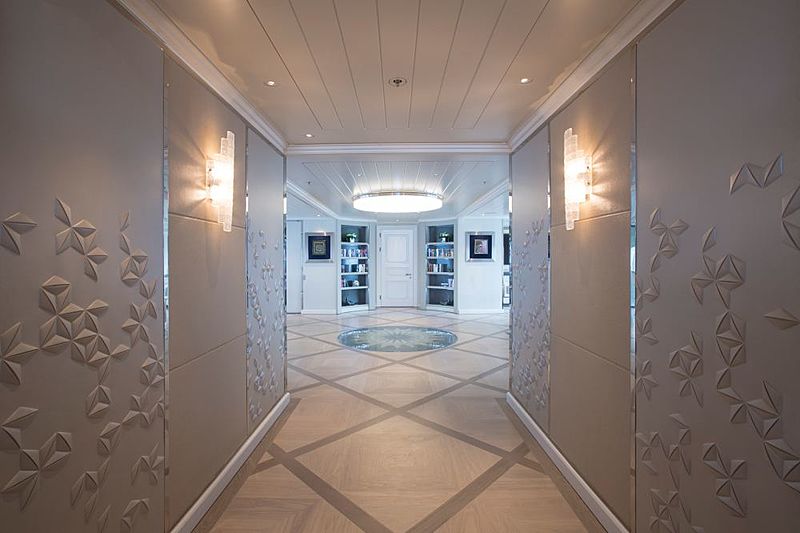 Four very similar cabins accommodate eight lucky guests here. “Our goal was not only to make sure the new Polar Star lived out is owner’s dreams, but that her guests too felt at home onboard, if only for a couple of hours or days,” says FM. These pastel-colour decorated rooms put the emphasis on the quality of the materials used rather that a layering of various obtrusive colours and tones. Despite the rather limited view to the outside, these cabins feel very spacious and light. 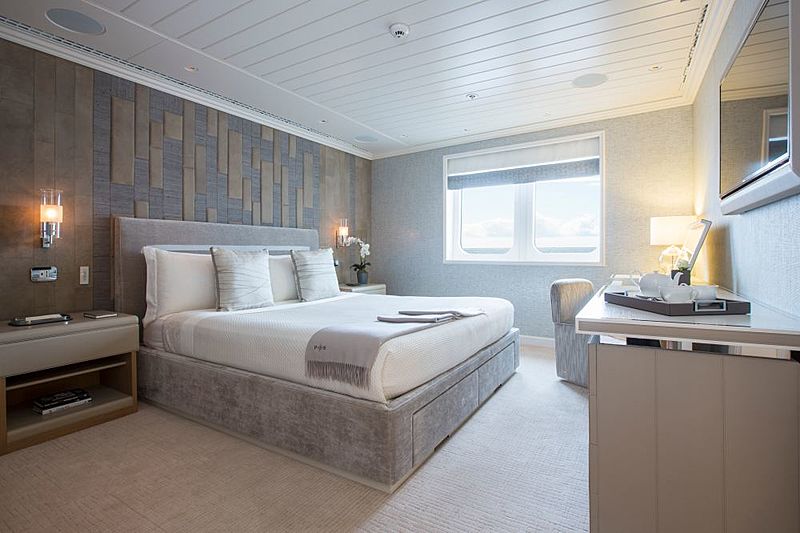 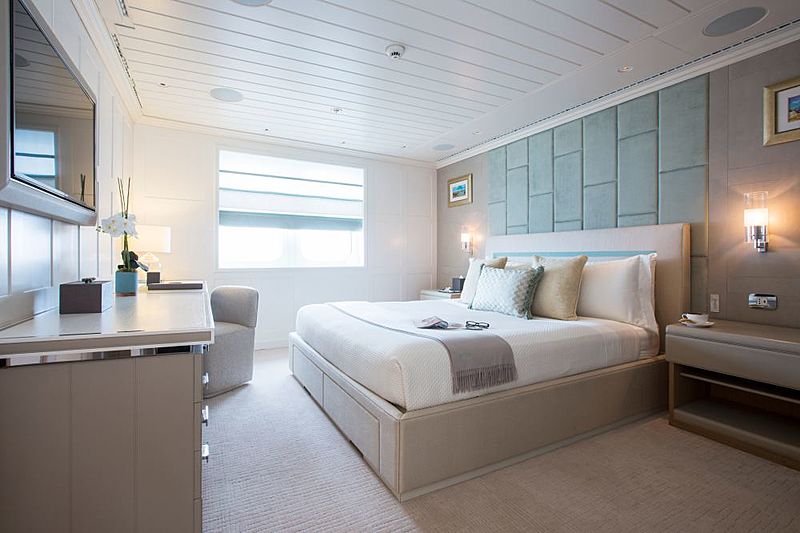 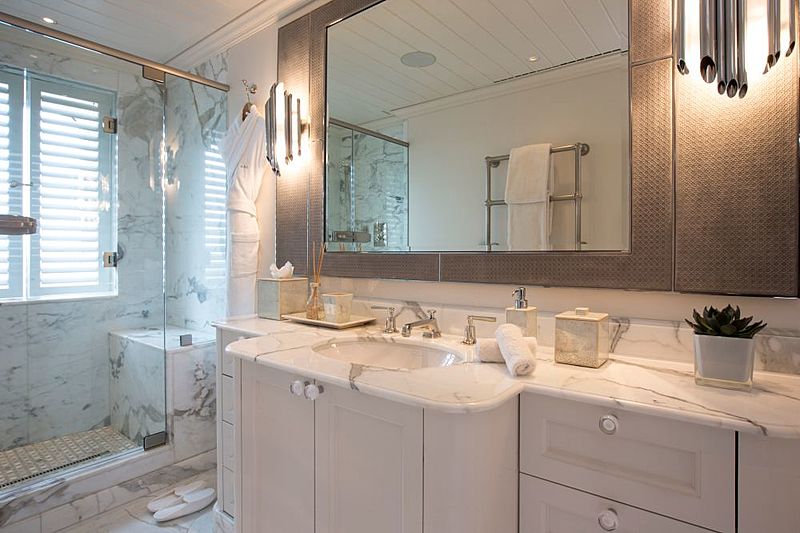 Head one deck up, and you find yourself on the owner’s deck. The relaxation starts in the skylounge aft that is finished with two symmetrical corner lounging areas. Art pieces from the owner’s personal collection and silver leaf mirrors that reflect natural light coming from the aft deck add the finishing touch to this laid-back area. 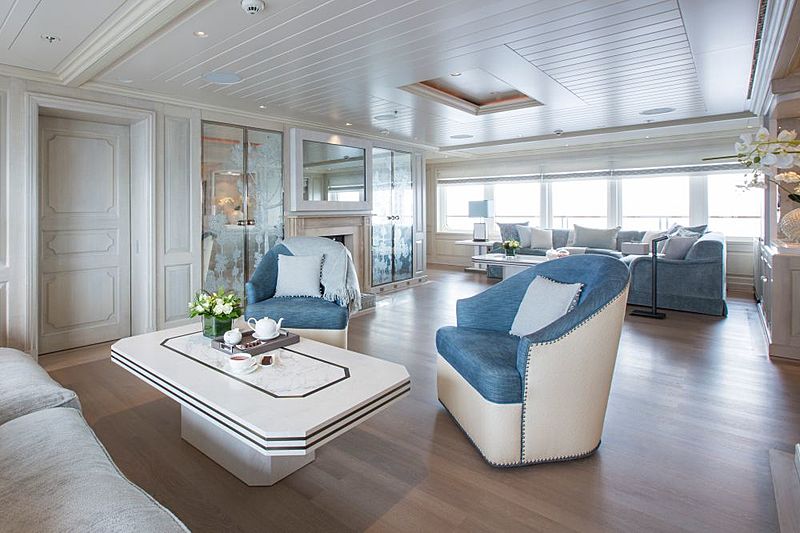 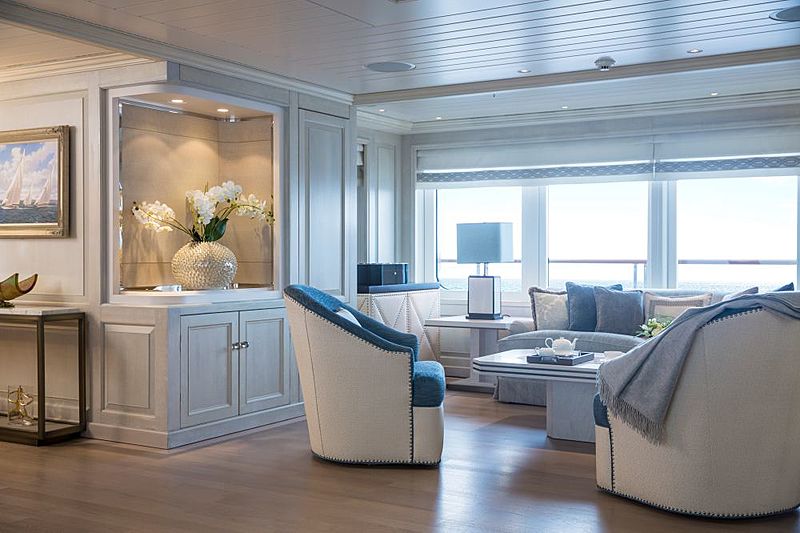 Walking forward from the skylounge, the owner reaches his private office before entering the master suite. The suite was entirely rearranged by FM after realising that some parts of the space were not being used as originally designed. The bed was, therefore, moved forward, closer to those panoramic windows. This freed up valuable space for a large wardrobe and provided the perfect pallet onto which FM mounted a custom wall piece made up of gentle leather flowers. 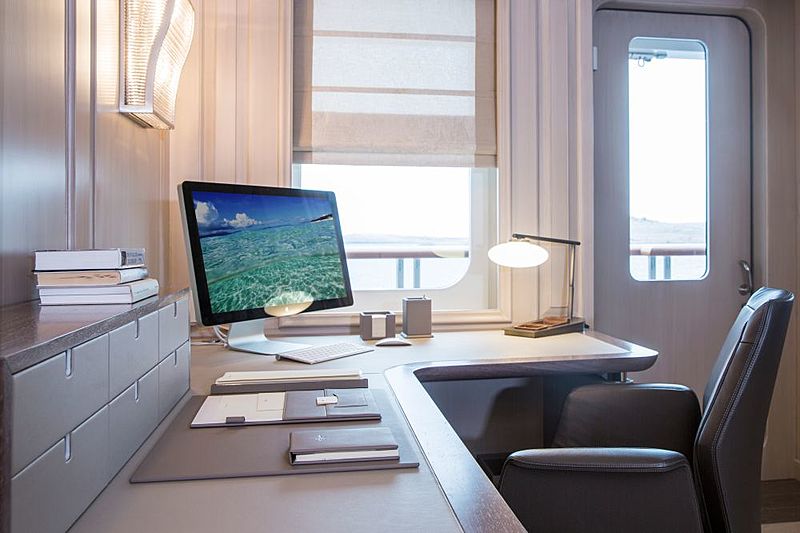 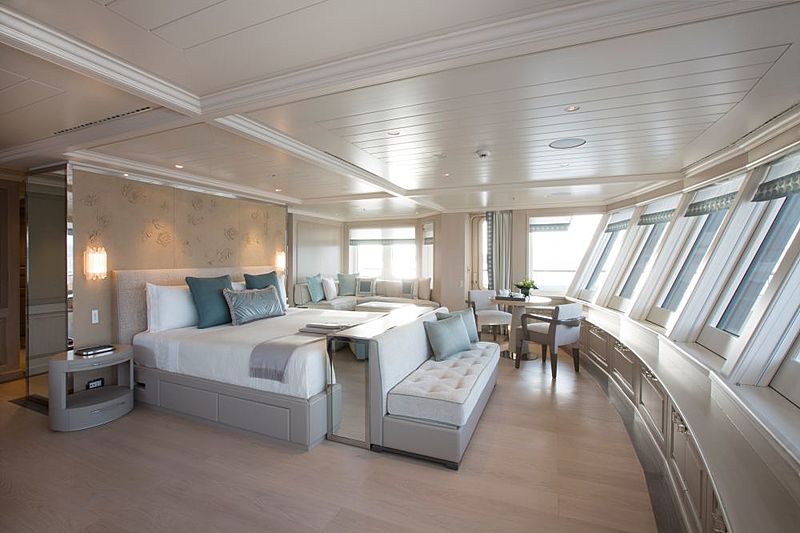 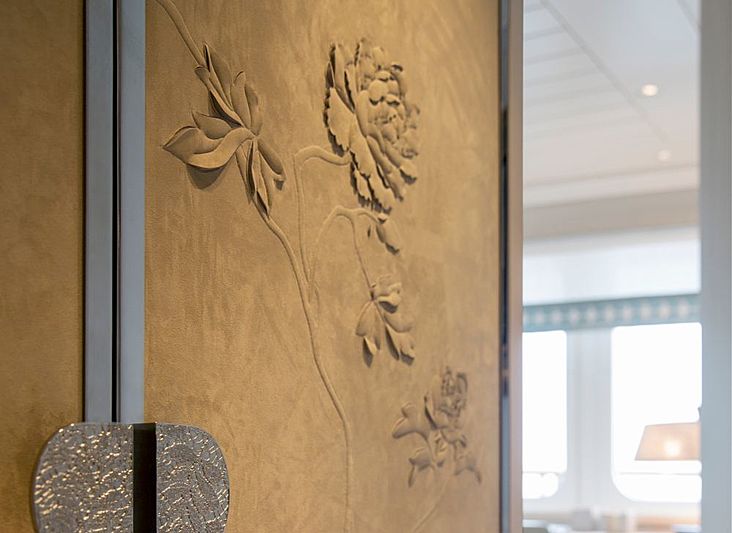 The owner’s deck aft is a massive deck space where all guests can come to for formal dining occasions, a late afternoon cocktail at the sand-carved bar, or simply relaxing the day away under the awnings while reading on either of the oversized exterior lounges. As the sun goes down, mood lighting creates a mystical mood under which guests can share stories of the day’s events. 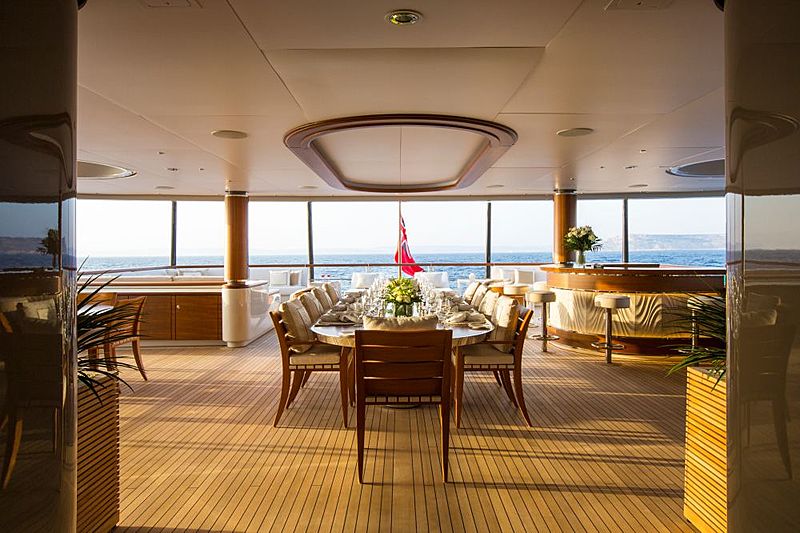 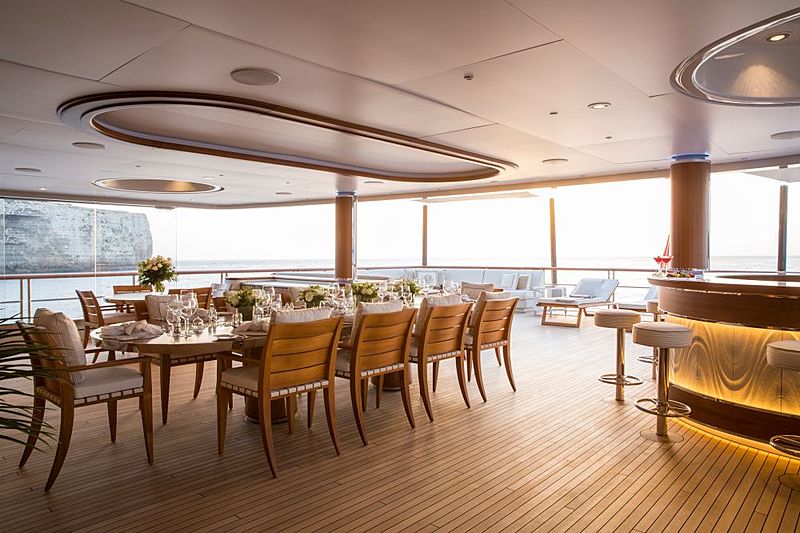 Continuing the flow to the top, above the owner’s deck is a pool deck that has been redesigned in association with Espen Oeino. From here guests can enjoy one of the best views on the yacht while floating at the edge and overlooking the surrounding from four decks above water level. 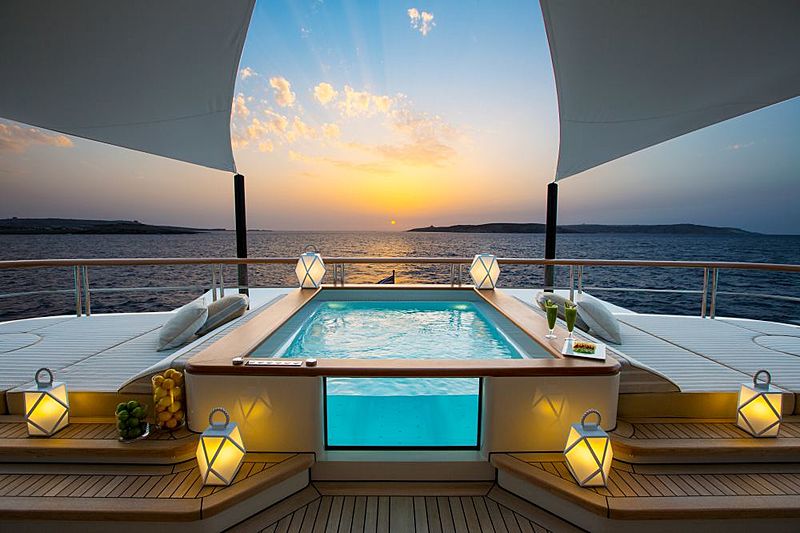 By far one of the most challenging area to have been reconfigured as part of the refit has had to have been the sundeck. Project manager, Trevor van Wyk speaks about the challenges that this space presented: “This was very complex in terms of construction as every element had to be removed and replaced. The replacement furniture was completed using carbon fibre and coordinating each element was certainly a challenge.” 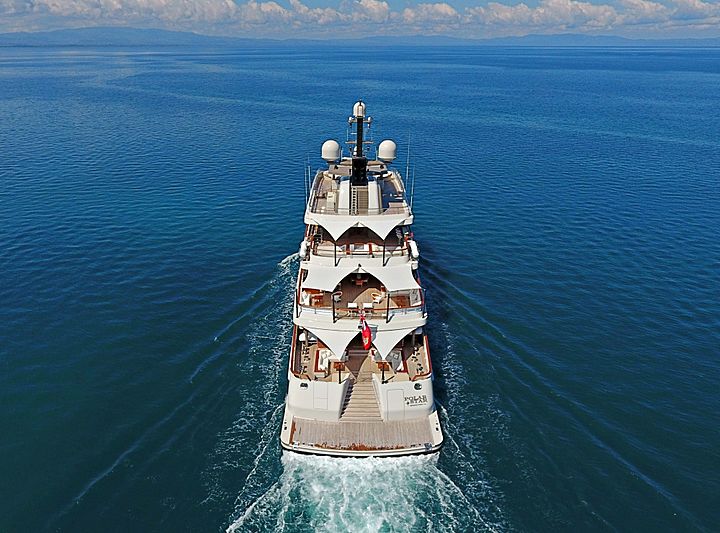 An entirely new structure connected to the mast was built to facilitate the forward bar overlooking the oncoming horizon. Known as the bubble bar, this area treats guests to exquisite views and the bubble inserts light up and alternates between the various colours as the night grows darker. 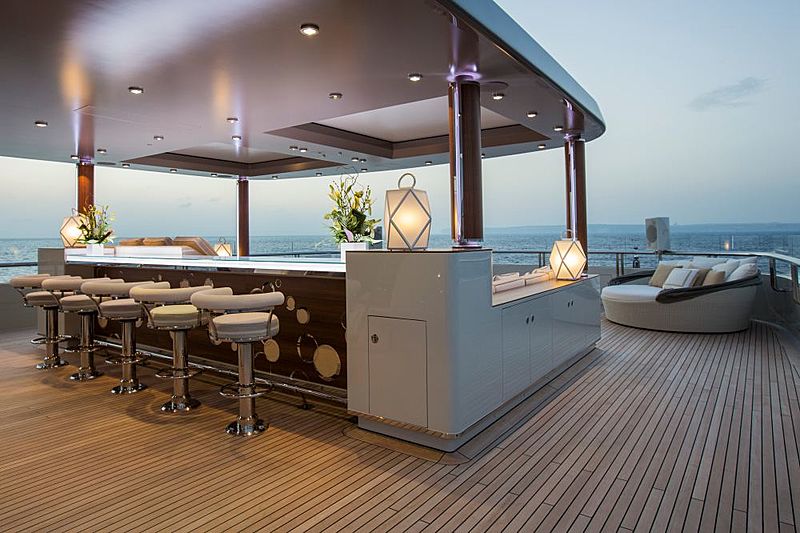 After a tight shipyard schedule and faced with the difficult task of transforming a legend in the superyacht fleet, Polar Star sails once again with a new look and a new course.