The 38.55 metre Taransay was present at the latest edition of the Monaco Yacht Show, where the SuperYacht Times team were invited on board and shown around. Built by the Italian shipyard Rossinavi and completed in summer of this year, she features both exterior and interior design by Studio Tassin Design. 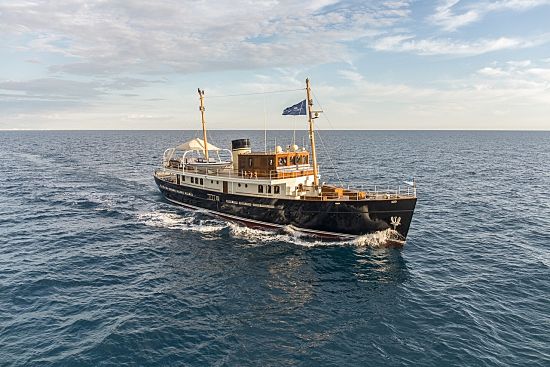 She is an impressive reproduction of a British vessel dating back to the early 20th century, and designers worked hard throughout her build and design to remain largely true to her original composition - substantially aided by data found on the yacht in the Aberdeen Museum in Scotland. Historically, in the 1930s, the original Taransay was utilised in the Second World War - as many vessels in this period were required - and was used as a fire engine vessel in the Royal Navy. 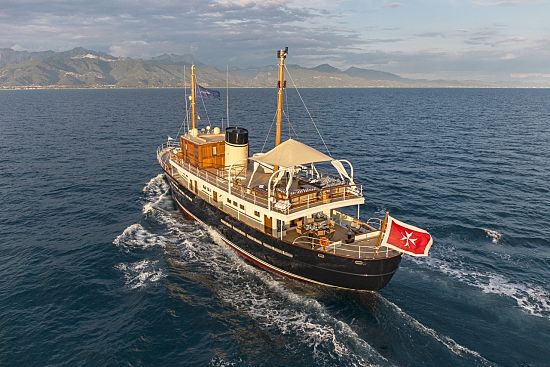 Her interior design is of a timeless, luxurious style, featuring dark woods of rich brown, with cream and blue accessories and upholstery. Elegance exudes from the living areas on her main deck. The formal dining area is found forward, with a large table placed centrally in a dedicated dining room, creating a sense of exclusivity and cosy sophistication. The room is flanked by six windows, with a further two smaller windows forward, allowing guests to enjoy spectacular views and natural light whilst maintaining privacy. 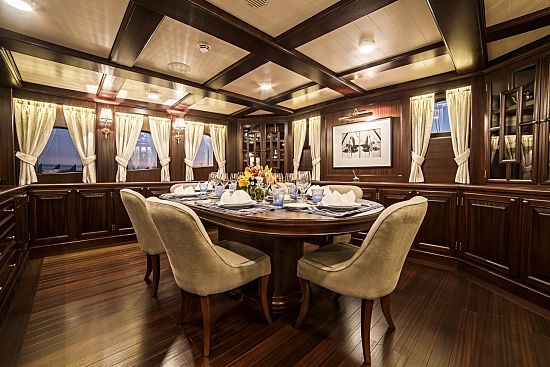 Leading from the dining area to the main salon through a chic corridor, the aft of the main deck is dedicated to a refined living space. Two large sofas as well as two comfortable armchairs surround a unique, vintage inspired large wooden chest, with a considerable rug covering the polished dark wooden floor. The design of all the upholstery certainly harks back to the original roots of Taransay, with a traditional tapestry design in autumnal shades of reds, browns, oranges and greens. Dominating the main salon at first glance, the bold tapestry prints give the lounge a unique and welcoming ambiance, creating the ideal area for relaxation and socialising. 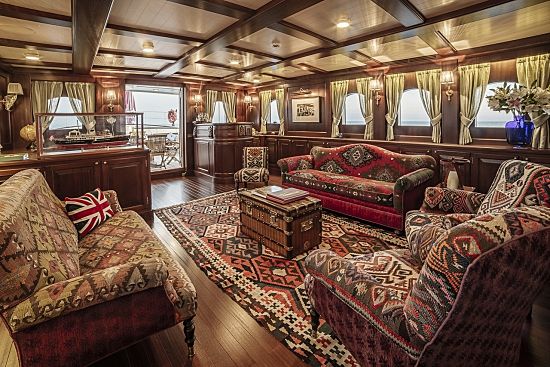 The main salon is connected to the main deck through a small door, leading directly onto a shaded dining area. Seating up to six guests comfortably, the outdoor table allows guests to enjoy the very best of al fresco dining whilst taking in the surrounding views. Several cushioned seating areas are also found on the main deck, with nautically themed blue and white striped upholstery. 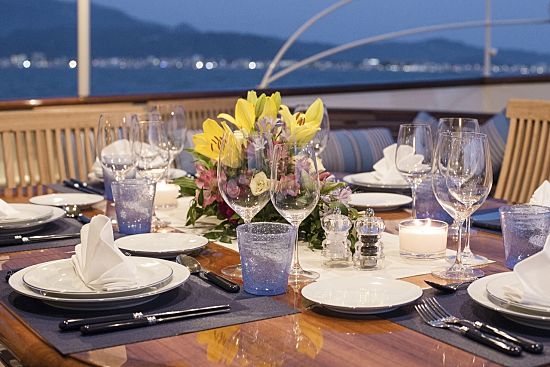 The nautical theme is continued on the upper deck, where another, larger seating area is found under a canvas awning, all with the same design of navy blue and white striped cushions over a navy blue soft seat. Two low tables are located next to the seating areas. The whole area is also surrounded by translucent curtains that can be efficiently drawn - without the look of being cluttered - or can encompass the whole area, creating a cosy, private atmosphere day or night. 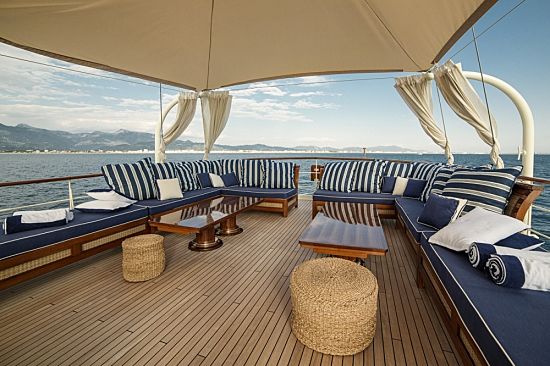 She accommodates up to ten guests on board over five luxurious cabins, as well a crew of seven. All accommodation is located on the lower deck, consisting of three twin cabins, a double cabin, and the expansive owner’s suite. All rooms continue the yachts classic interior design, with dark, rich woods used throughout, complementing the crisp white linen of the plush beds and a palette of blues. 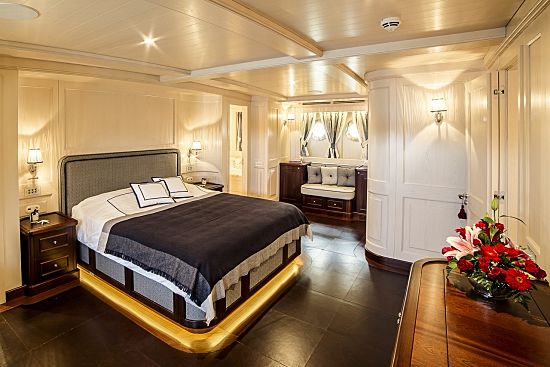 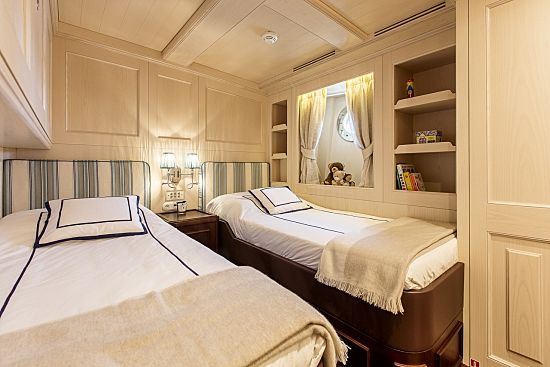 To remain truthful to the original design, Rossinavi states that the aim was to have “no detail out of focus.” This posed some challenges, of course, with many materials or objects that were readily available in the 30s now difficult - or near impossible - to find. This didn’t phase the Rossinavi team, however, as they state, “If the material or the specific object is already on the market, that is all the better. If not, it is made at the Rossi's, who do not contemplate the nature of compromise when at stake there is the quality of tradition to be reflected in the sea.” All accessories on board, for example, have been constructed from Nibral, a material which does not exist on the market. 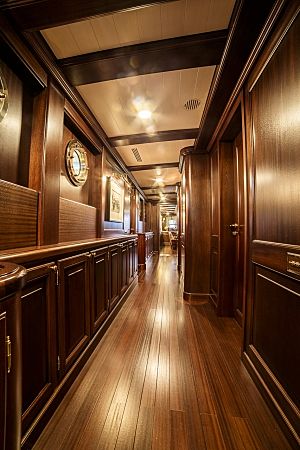 Commenting on the use of Nibral on the vessel, Rossinavi explains, “Finding the correct balance to achieve the Nibral at the foundry was for the Taransay like having the best tailor-made historical costume, made with the rarest and richest fabrics, or even of brand new production. Modern ships’ traditional clothes, worked in polished stainless steel, were not suitable for the Taransay's historical-line-drawn aesthetics.” 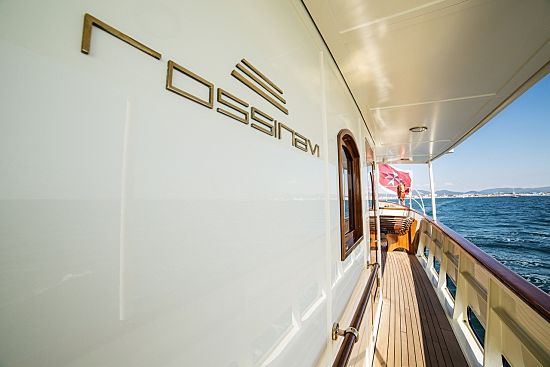 Captain Santoro who was the Owner’s project manager throughout the build of Taransay comments on other deviations from the original design, including a modern update on the cranes on board. He says, “The superior deck originally held small cranes to lower and raise service boats, but thanks to one of Paride’s brilliant ideas, we have installed a hydraulic crane which can fold and disappear from sight when not in use, thus avoiding the ‘fist in the eye’ effect. In this way the elegant lines and yacht silhouette were not spoilt. The crane can handle a 5 metre plus tender, and at the same time the other small cranes have been kept, now used for the deck speakers and the superior deck’s lighting, and also to hold in place a large awning covering parts of the deck when this is open.” 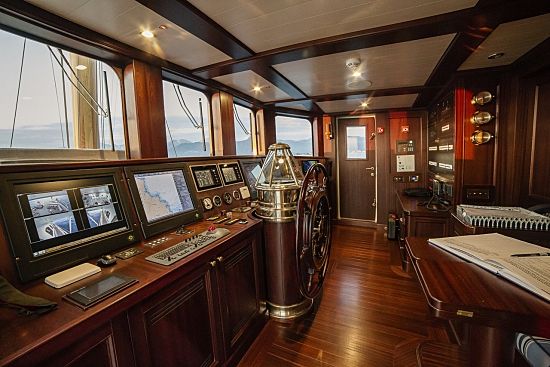 In regards to her performance, she is powered by twin Caterpillar C18 Acert engines, giving her a maximum speed of 14 knot and a cruising speed of 12 knots. She has a range of 3,500 nm at cruising speed. 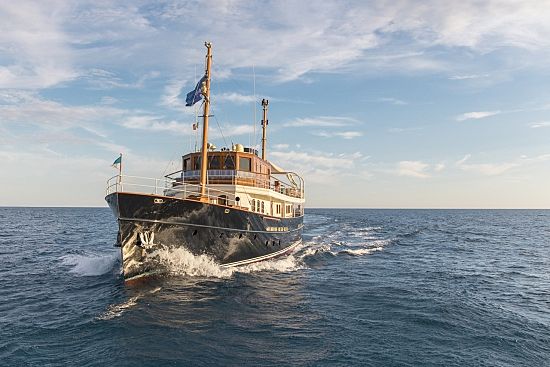