This elegant 1937 design – perhaps the most beautiful of all the J’s – is not all that she seems. Or, to be precise, she is rather more than she seems. Created for a very experienced owner – who also commissioned both Hyperion (47m / 1998) and Athena (90m / 2004) from Royal Huisman – Hanuman has been conceived as a faithful homage to the original. 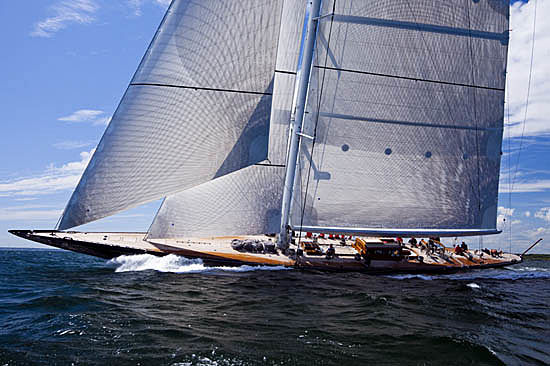 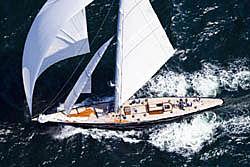 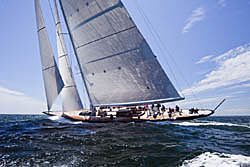 One of the great pleasures for all who work at Royal Huisman is the opportunity to realize the diversity and ambition of their client’s individual dreams. Even when every project is unquestionably special, some commissions can only be described as exceptional. Such a gem is Hanuman, a modern recreation of Tommy Sopwith’s beautiful “Super-J” Class yacht, Endeavour II. 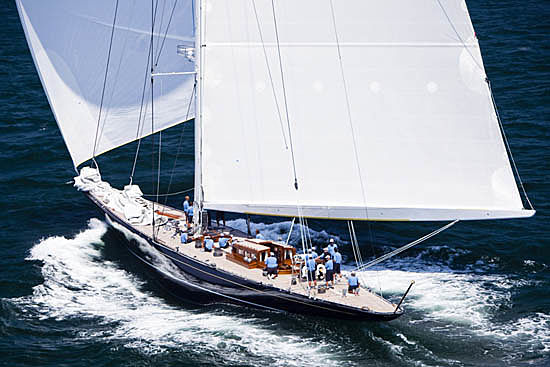 Hanuman first touched the water in March 2009 and, following near-faultless sail trials, she set off across the Atlantic on her own keel to Newport, Rhode Island, for a twenty-first century duel with the recreation of her twentieth-century nemesis, Ranger. 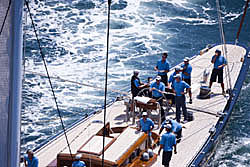 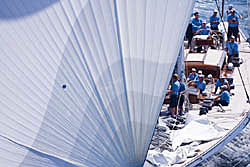 Clean, tidy deck spaces are enhanced by extraordinary attention to detail: invisible hatch hinges are under mounted beneath the teak decking, the lines of planking run perfectly through the margin free hatches and appear to dissolve as their ends marry into deck structures and coamings. The deck equipment has been painstakingly fabricated and polished in stainless steel then bead-blasted to provide a subtle, silver-grey matt finish that is the perfect complement to the gleaming, jet-black hull with its lustrous, recessed gold cove stripe. The teak-clad deckhouse looks every part the original, belying the lightweight carbon-fibre structure beneath. 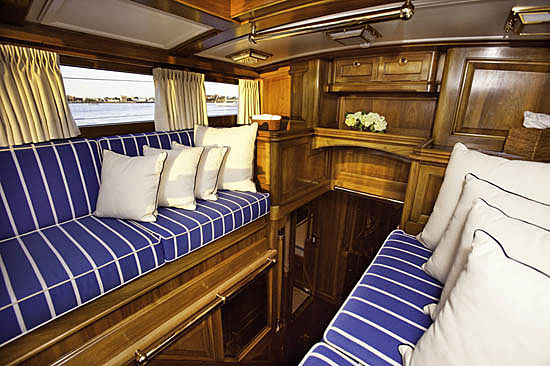 Stem to Stern, inside and out Hanuman exemplifies the meaning of harmony Stepping back in time descending an elegant staircase from the finely proportioned deckhouse, one cannot help but be struck by the almost architectural symmetry of the interior layout, with mirrored guest cabins to port and starboard divided by a hall way that focuses the eye towards a beautifully appointed main salon. 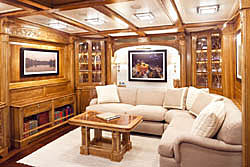 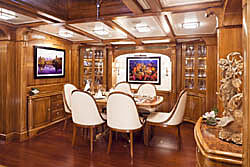 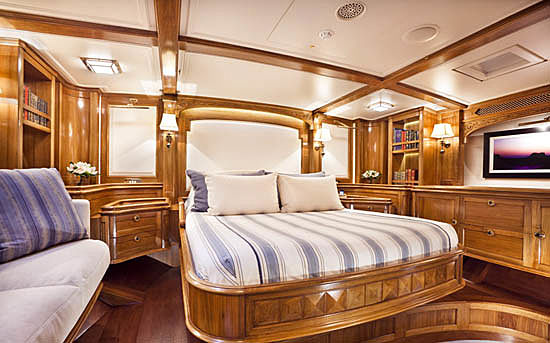 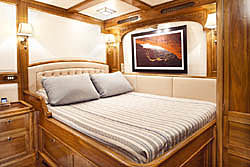 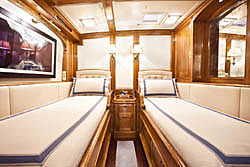 His attention to detail is further evidenced in the master cabin aft where, by neatly cantilevering the forward end of the bed, he has deceptively created an illusion of cavernous space far greater than that actually allowed by the slender hull lines.

A wolf in sheep clothing

Detailed calculations for loads at mast partners, spreaders, goose neck, thru-deck and many other locations afford very fine tuning of safety margins to eliminate redundant weight, whilst retaining strong confidence in structural integrity. To ensure that the rig performs the way it was designed to, a different approach to fabrication is required. In a conventional carbon mast-build, 2 - 3 layers of carbon are laid down and collectively de-bulked under vacuum. For this project, spar maker Rondal used High Modulus carbon (150% stronger than standard) and de-bulked at every single layer to ensure local strength and the elimination of any possible air voids. 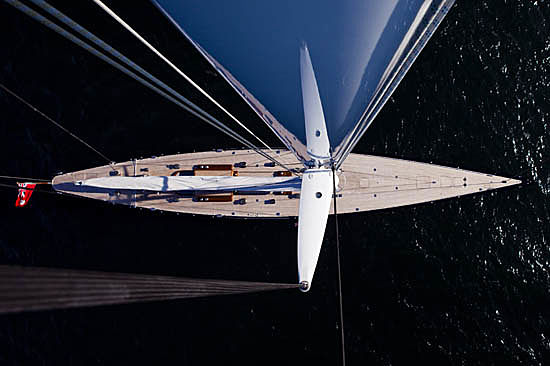 A further innovation is that the fractionally rigged 52.6m tapered carbon mast was fabricated by Rondal as a sinlge piece. Instead of molding on a conventional metal mould, a carbon form was created to eliminate any risk of distortion from differing heat coefficients characterized in dissimilar materials. The project team’s wider capability brings additional value through Carew’s expertise in headboard locks, spreader tip cups, spreader connections and adjusters; Composite Rigging’s expertise in carbon standing rigging; and North Sails’ expertise in Carbon Spectra 3DL sail design and fabrication. The end result is a mast whose static shape can be configured to the highest levels of rig sophistication; and one that meets the most rigorous demands of both sail makers and trimmers to control sail draft and luff curve for optimum performance, no matter how mother wind decides to challenge them. 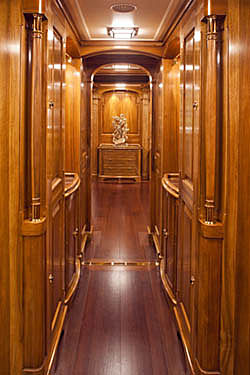 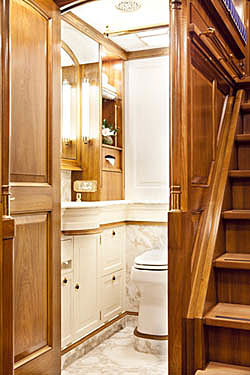 Hanuman’s French Walnut interior has been hand-finished by methods first developed almost 200 years ago… Royal Huisman firmly believe in working alongside the world’s finest specialists, and few specializations can be more painstaking in process, nor more stunning in effect, than that applied to Hanuman’s interior joinery by art and architectural renovation experts, Acanthus International. Their finish is a hand applied, 14 step process consisting of traditional methods of bleaching, colouring, French polishing, colour distressing and applying a light patina. The result is more than just a yacht interior – it is a magnificent assemblage of the finest collector-quality period style furniture. 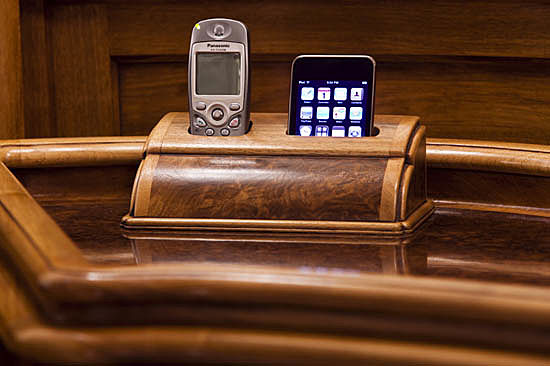 "My first experience with a boat from Royal Huisman was on Juliet, sailing with Bruce Katz in San Francisco Bay. I had a very good Dutch-built yacht at the time, but when I sailed on Juliet, I immediately decided that if I ever commissioned a custom yacht, it would be at Huisman. I eventually commissioned Hyperion, Athena, and most recently a replica of the 1937 J-Boat Endeavour II, which I named Hanuman. Over the years, my commitment to this great yard and group of people has only increased. What makes Huisman unique? There are obviously many excellent shipyards around these days, especially as large yachts have become more and more commonplace. The answer to this question is not as simple as it might appear. 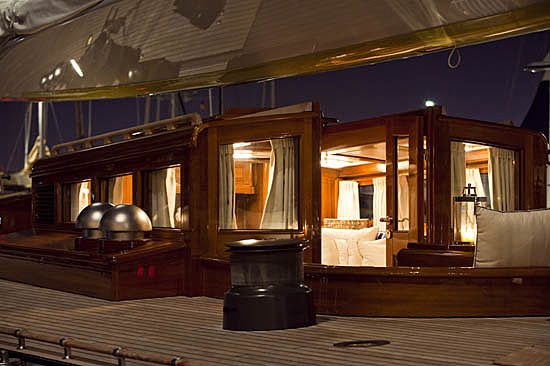 The first reason is due to the spirit of Wolter Huisman. Wolter’s grandfather had been building boats for many years, but Wolter decided to take simple boat building to another level. I’m sure he could not have imagined that he would ultimately agree to build Athena, but his enthusiastic and positive spirit over the years - his positive encouragement to Huisman’s many expert machinists, woodworkers, technologists, and drafts people, his continual walking around talking to them, his wise judgement of what to do and what not to do, his insistence on always doing the best and never cutting corners – these are the foundations of Royal Huisman. 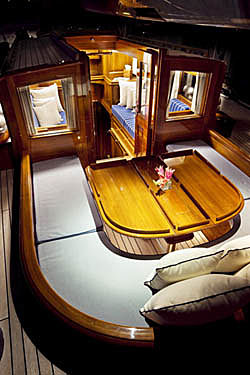 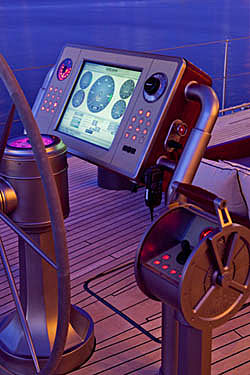 The second reason, ironically, is the relative isolation of Vollenhove. This relatively small Dutch village is dominated by Huisman and their winch and rigging subsidiary, Rondal. Many of the people who grew up in this community have learned their trade at Huisman, and most of the people in the village are related to someone who works there. Because the yard takes good care of them by providing an enriching work experience and by paying proper wages, their employees remain very loyal, as they enjoy a good life in this wonderful countryside. All great companies are built on the culture and the continuity of knowledge of their people.

Another unique aspect of Royal Huisman is that many owners have returned to have them build multiple yachts, and loyal customers are the best measure of a great yard. Athena is one of the largest, most sophisticated yachts ever built, so they proved they can do almost anything. I would not consider building a yacht elsewhere, even a motor yacht. Even if I wanted to build an ultra-fast, allcarbon super-yacht, I would try to convince Huisman to build it, because I know no one would do it better. 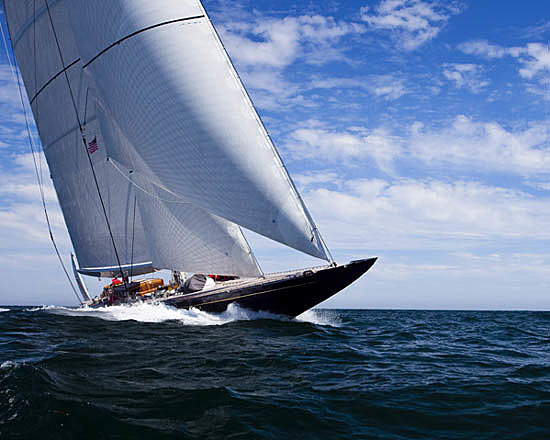 I’ve been asked by many people whether Wolter’s death soon after Athena was launched has changed the yard. The answer is that his quality, excellence and spirit live on in the people there. Nothing has changed because the same people are there, committed to the same ideals as always. That is why it is called “Royal” Huisman Shipyard."
Jim Clark