Built by the Istanbul based Shipyard Tansu Yachts, the all wooden 38.75 metre motor yacht Alyssa was launched in 2014, the second yacht Tansu launched in the year following the completion of the 37.60 metre So’ Mar. Originally named Thunderbolt, she features naval architecture by the renowned Dutch company Diana Yacht Design, whilst her exterior design was undertaken in house by Tansu Yachts. 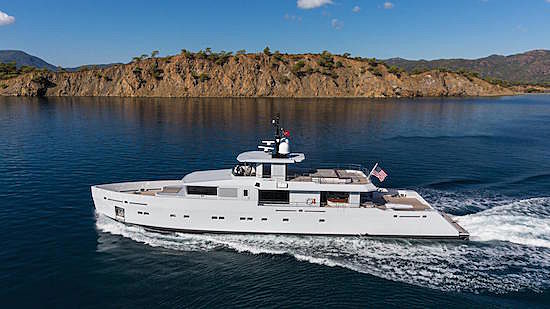 Designed for a close friend of the founder of the shipyard, Riza Tansu, the owner’s brief given to the Tansu team was exceedingly simple - something that is inkeeping with the simple, sophisticated, ‘close-to-the-sea’ philosophy of the yard. The team were reportedly told to do whatever they felt was right, as long as the design was both honest and simple. 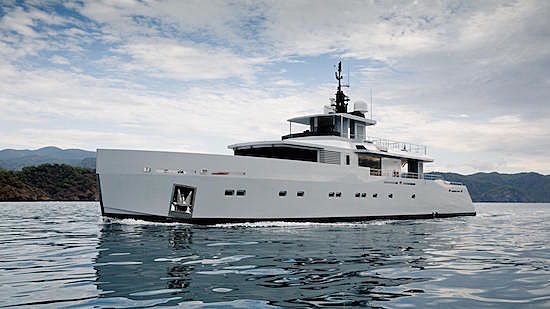 With free reign to design a simple vessel that still exudes the opulence that comes hand in hand with a luxurious superyacht, the Tansu team’s options were endless, though once you see Alyssa, it seems as though this finished product could be anything other than what lies in front of you.

Throughout the entire vessel, Alyssa has a beach house, relaxed feel, whilst still retaining the elegance and luxury of a superyacht. The colour scheme utilised reflects this style, with white walls, dark-wooden furniture, and oak flooring, and a nice extra touch is added with several of the decorative pieces such as the large bulkhead mural. Furthermore, Alyssaalso features photography by the talented Portuguese photographer Andre Brito, adding a sensual touch of class throughout the yacht with several tasteful nude portraits. 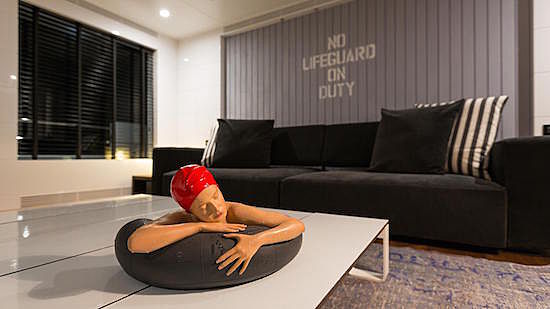 In the saloon, the beach house ambiance is achieved by means of a range of very comfortable furniture, including a large sofa, two stools, two low poufs, all situated around a beautiful, distressed style rug and a coffee table. 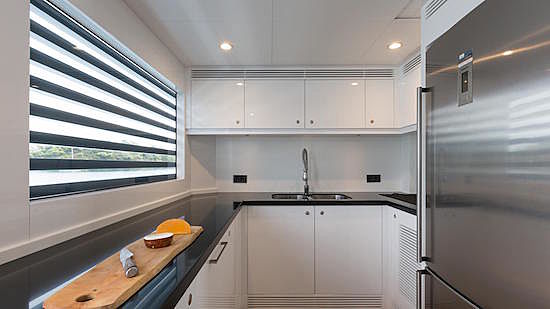 Forward of the main saloon the stairs to the guests accommodation, galley and the wheelhouse are found, as well as a day head. Down the stairs on the lower deck lies accommodation for eight guests in total, including a large owner’s suite. 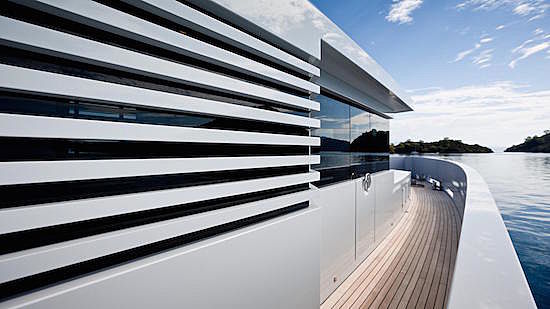 The crew accommodation - sleeping five crew - is strategically positioned between the owner’s suite and the engine room, forming a kind of sound barrier resulting in peacefully low noise levels. Features of the owner’s suite include a walk in wardrobe and dressing room, a study, and chic his and hers bathrooms. 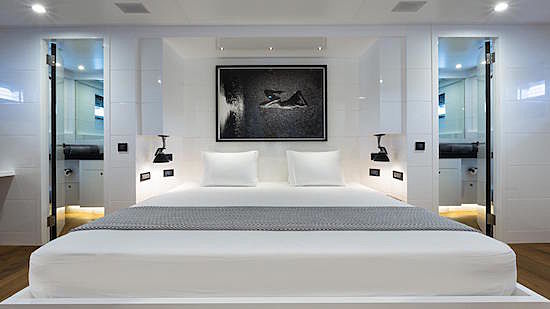 In regards to the remaining guest accommodation, cabins are made up of two identical twin rooms as well as an additional VIP suite. All of the rooms come with en suite facilities and follow the design brief as set by the owner. 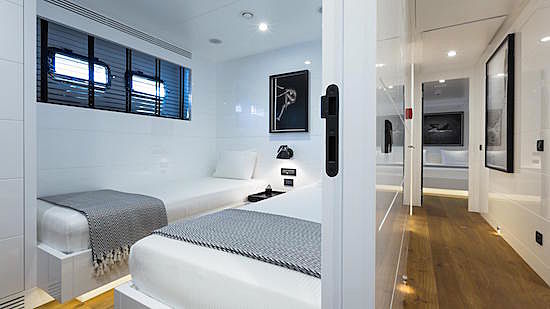 The cabins are simple, but with a sense of understated elegance, further highlighted by the addition of the beautiful photography of the aforementioned Andre Brito.

Moving on to her outside areas, one of her most relaxing and spacious areas is found on the upper deck, where with the elimination of a dedicated upper deck saloon, Tansu have been able to create a large area with a table surrounded by bench seats. This area is an ideal setting to relax and enjoy the beautiful surroundings, or to enjoy food and drinks in a sociable, cosy environment. 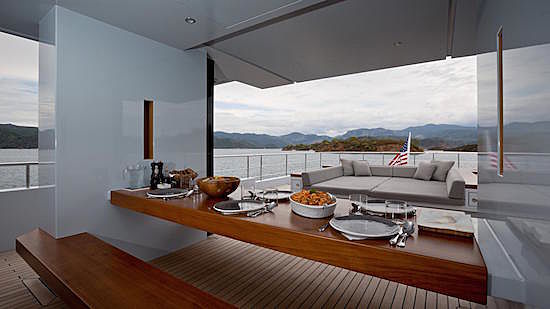 Moving on to the flybridge, this area includes a three-seat helm station, with the helm area completely separated from the guest areas by storage space and a refrigerator. 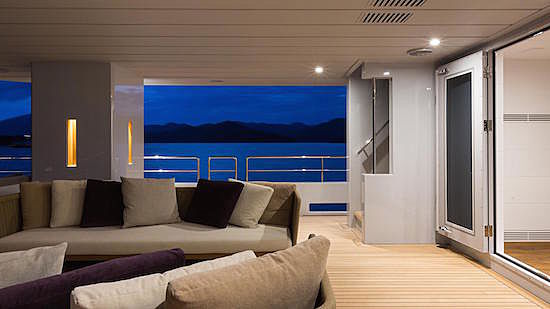 Catering to the simplicity that the owner desired, Alyssa has a relatively minimalist superstructure. The benefit? An increased amount of deck space for all of her guests to enjoy to the fullest. In front of the wheelhouse in one such example of ample areas designed in a simple yet sophisticated, with a large, comfortable sunpad awaiting guests to relax and enjoy the view ahead. 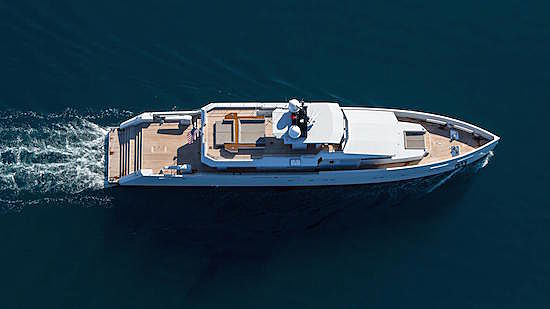 The main deck features additional seating, as well as ample sunpads to enjoy the very best of the Mediterranean weather in which Alyssa spends most of her time. The main deck also houses a custom Novurania RIB measuring 5.5 metres in length, and is launched via a crane. There is also space to house another tender, as well as a vast array of water toys. Once the tender is launched, a large space is cleared that can be easily enjoyed and utilised by guests dependent on their desires - some suggested options include an al fresco dining area, as well as a dance floor for the best entertainment. 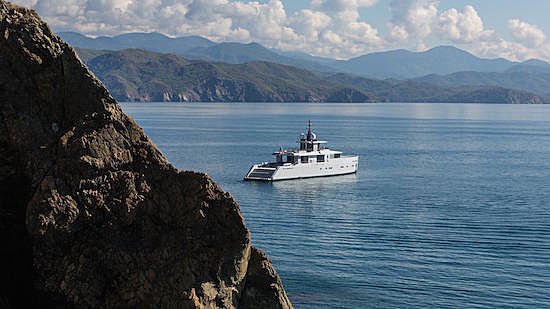 In regards to her performance, she is powered by twin Caterpillar C32 1,900hp engines, giving her a maximum speed of 21 knots, and a cruising speed of 18 knots. On board Alyssa, as well as a selection of other newer Tansu built vessels, the hydraulic systems have been eliminated. Instead, electric stabilisers and an electric bowthruster have been used. The logic behind this is to contain the pumps and pipes in the engine room, as well as reducing the noise level when at anchor at night time.

By Gemma Fottles, photos by Jeff Brown of Superyacht Media