Home > News > Superyacht of the Week: The 30 metre catamaran Quintessential

Back in early 2004, the phone rang and I had my first conversation with the owner of Quintessential where he took time to describe his vision to me, that of creating a 30m sailing catamaran for him and his family to cruise the world. As the conversation went on, I was naturally drawn to the man on the other end of the phone - particularly when he told me that his previous "yacht" was a Hobie! I travelled to his home and so the "Q5" journey began... 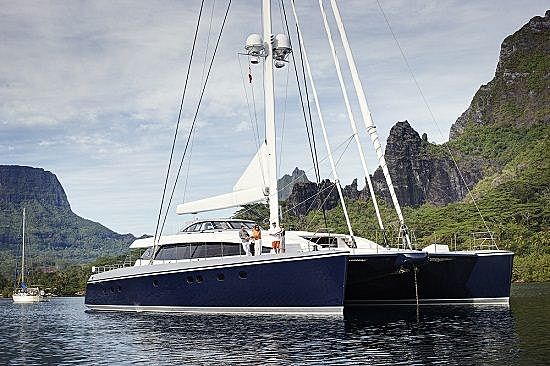 We sat together and chatted about his dreams and aspirations for this yacht, how they were a close family and how they really loved spending time together and all are physically active. Additionally, as their homes are on the water, they love to be on, in, and around the stuff. 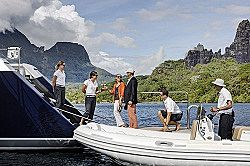 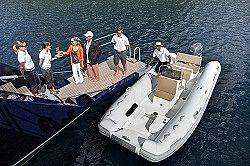 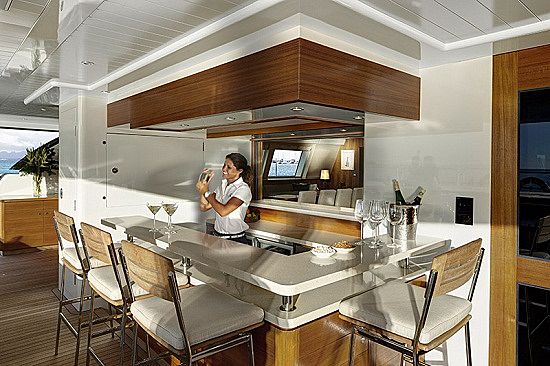 I asked why a cat? And the answer had obviously been well considered - a platform that is large enough for the whole family and friends, that is stable enough for a landlubber to not feel like a fish out of water, a yacht that has unequalled social spaces (as compared to the equivalent mono-hull) but importantly, a true sailing vessel that keeps you closely connected with the sea. The result is Quintessential. 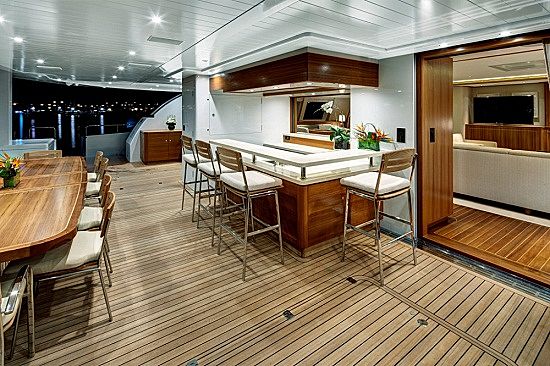 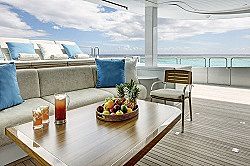 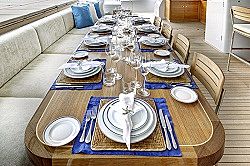 The owner joked to those gathered at the launching celebration in Auckland in June 2012 - "Thanks for building this Hobie that spun out of control." He went on to say how much he enjoyed the journey and that it was all worth it. In this case "all" was not simply the normal trials and tribulations that go along with designing and building a custom Superyacht. But why not throw into the mix a global financial crisis forcing a stoppage of construction for a couple of years and a yard that as a result, was skating on thin ice for a while, and there you've got the perfect recipe for stomach ulcers and anxiety! 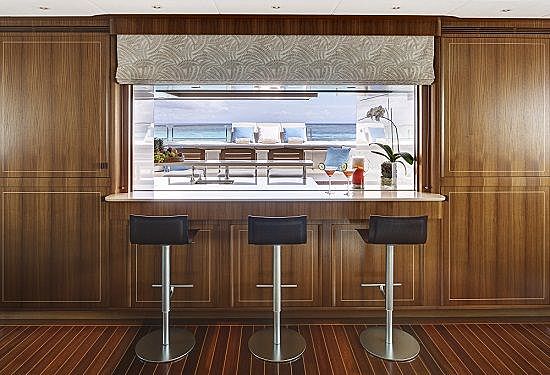 A client wishing to stop a build for an indeterminate length of time is something we'd not been faced with before - yards going bust and having to move semi-completed yachts, yes, but the owner being forced to stop? That was something new. So out comes the contract for a thorough review to see just how much trouble we were in. The contract was pretty clear inasmuch as if the owner defaulted on his obligations, the yard would have been well within their rights to take possession of everything and doing what they wished, leave it, sell it, complete the yacht and market it. However, after initially relaying the less than stellar news to Ian Cook and the team at Yachting Developments, we engaged in lengthy discussions on how best to protect the owner's asset in a way that preserves the project and allows us to reenergize it in the future. Which in and of itself is not an insignificant task. Now I'll turn the clock back to the beginning again, and recall my conversation with Ian regarding whether he should be put on the bid list or not, as at the time he was working out of his Beach Haven yard which had more than enough room to swing a cat, but not nearly enough room for this cat. In true Ian Cook style he said "if we win the contract, don't worry, I'll find a way to build it." He did win it - and true to his word, he did find a way to build it - that was just the catalyst he needed to move from the old yard to his expansive facility in Hobsonville. We didn't realize at the time what a providential move this was. But the stoppage meant moving the huge hulls and moulds that had already been completed. Not something you can just shove in the corner cupboard for later. But the new facility allowed for Ian to crane the big bits outside and to store all the small bits in a safe and secure building. After taking protective measures and weatherproofing the hulls and moulds, and inventorying every piece, part, drawing, good and chattel, the project was effectively "put on ice". This was a stressful time for all involved. 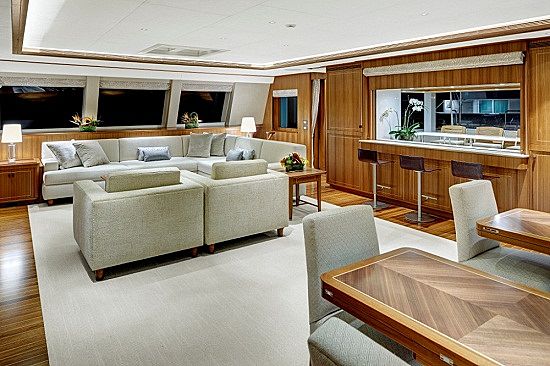 As the months ticked by, I became concerned that as Yachting Developments completed the projects they had in house, there appeared to be a dearth of new ones. The ever-present idea of the yard having to shut their doors was a nightmarish scenario - a partially built boat, a shed load of bits and pieces, and bunch of information on computers - and some residing in people's heads. Now try taking that kitset to the next guy and ask him to finish it - crikey! I felt compelled to reach out to the owner to see if we could avoid this landslide. 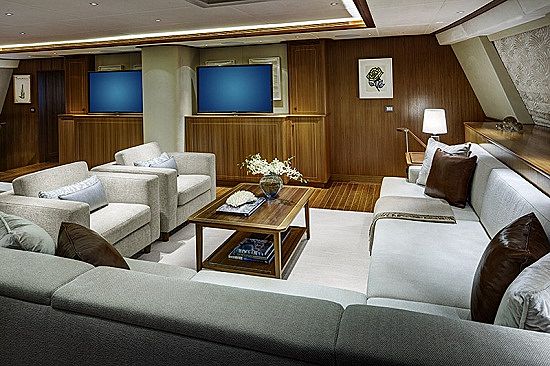 We agreed that we should start the exploratory process of how best to re-price and reschedule the contract. After some negotiations, the dust was blown off the parts, and the wheels of production roared back into life. Concurrently, Ian managed to secure the contracts for a 100ft Dixon design and the refit of the classic J Class Endeavour. As a result, the future was significantly rosier. 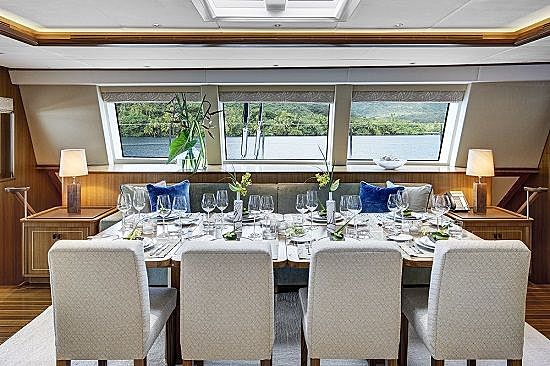 The reigniting of the project gave us an opportunity to look at new technologies and select them where appropriate. Of course we needed to resist the temptation to completely reinvent the wheel, as the bulk of the decisions had been made, systems had been designed and many items already procured. Also we needed to be ever-mindful that such an approach would undoubtedly increase the final cost - something we never lost sight of. 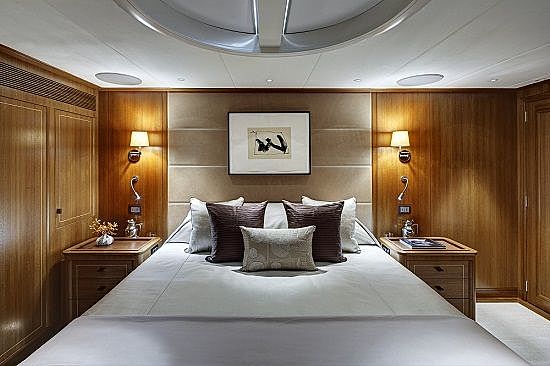 So Ian's team at Yachting Developments kicked into high gear, as did the interior builders, Superyacht Interiors New Zealand, constructing the Redman Whitley Dixon quietly contemporary teak interior which focused on creating a timeless relaxed elegance which in my opinion, they achieved with great aplomb. 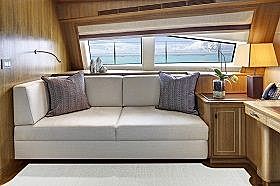 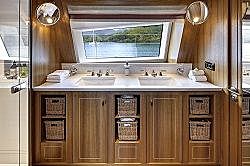 We worked closely with Southern Spars to develop a rig package that was going to be clean and simple to operate with a small crew, whilst still delivering the performance we were looking for - and having conducted sea trials and a number of ocean passages since, we know we achieved. The team of Doyle Sails, Southern Spars, Yachting Developments and MCM worked as a tight-knit group, which resulted in close harmony between the rig, sails and sailing systems which drives this Warwick design effortlessly through the water with minimum fuss. 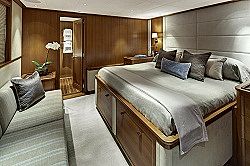 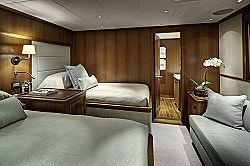 During sailing trials, I was personally really impressed at the performance characteristics of this yacht. I was fearful that she might not deliver exciting sailing, particularly when compared to my previous multihull project, the 38m racing cat PlayStation, but believe me, when we had her romping around the Hauraki Gulf doing 18 knots, she is certainly alive - though still remains comfortable - and in fact, sitting in the 180 degrees glazed saloon, even at this speed, one enters an oasis of calm. And how novel to sit at the lovely cockpit table, with 10 seated for lunch, under full sail with the table fully laid with best crockery and long stemmed glasses! The pleasures of multihull cruising... We had the spinnaker up one sunny Saturday and I suggested to the owner that we should walk up to the bow so he could feel the power and sit on one of the teak pulpit seats and enjoy the view. At that very moment, as if on cue, a pod of 10 or so dolphins arrived and frolicked playfully about each stem giving us a wonderful show. Surely this had to be a great omen for the future explorations of Quintessential. 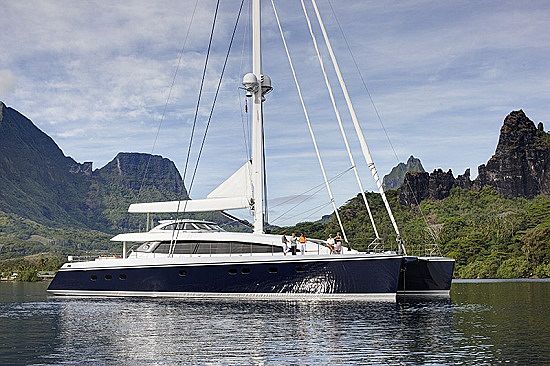 The first passage from New Zealand to Fiji was completed in just 5 days. The family then flew in for their first Q5 experience. No sooner was that cruise over then the Captain charted a course dead up-wind for Tahiti where the family flew in for their second cruise. The reviews ranged from, "This is ridiculously nice", to "the whole thing is amazing". I'll interpret that as a mission accomplished! 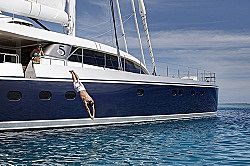 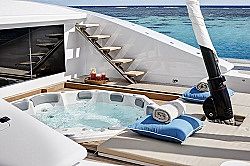 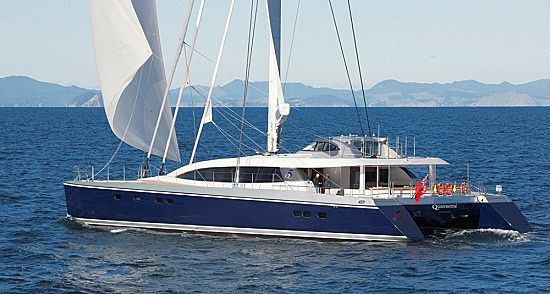 So I hope you enjoy the visual tour of the yacht as displayed here, and perhaps transport yourself to lying on the trampolines over the glimmering clear waters of a Polynesian lagoon just yards off the beach, the cockpit bar for a frosty lime daiquiri, comfortably in the saloon watching a movie, or maybe in the den writing letters home with some small sense of glee to those less-fortunate, perhaps in the throes of a snowy winter back home in northern Europe. 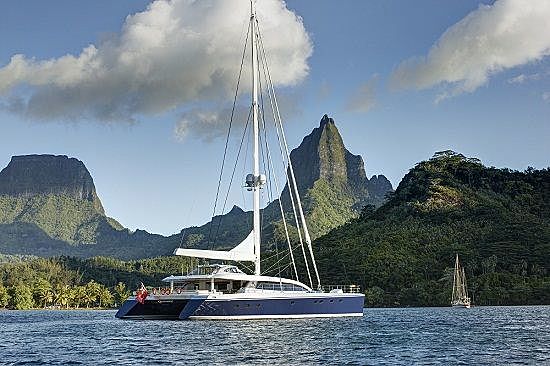 She will be for charter, so you may not have to wait long to realize those daydreams...

By Peter Wilson of MCM