The second unit of the Prince Shark 49 metre superyacht line was launched earlier this year in March, just one year after her sistership Param Jamuna IV was launched in March 2013. Rossinavi will display superyacht Polaris at the Monaco Yacht Show this September. The Prince Shark line has been designed exclusively for the Italian shipyard in Viareggio by Enrico Gobbi of Team For Design, who developed the complete design of both exteriors and interiors. Arrabito Naval Architects are responsible for her naval architecture. 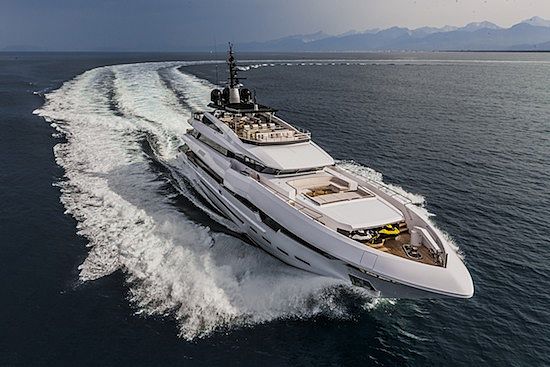 The Prince Shark line is stylish with neat and dynamic exterior lines. The line comprises of several key design and performance requirements; speed and power as well as volume and luxuriousness, and all below the 500 GRT threshold. Enrico Gobbi designed this superyacht with these components in mind, and has created a boat with an elegant yet sporty architecture, and a well proportioned volume that guarantees comfortable and spacious interior areas despite a superstructure that is not notably extensive. 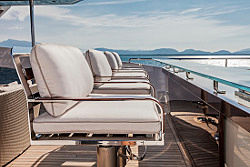 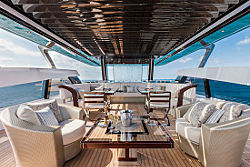 Rossinavi’s Chief Operations Officer, Federico Rossi, comments, “on Polaris we obtained performances even better than on previous Prince Shark, by adopting several lightening solutions. One important fact is that the vessel runs perfectly on her design lines, drawing a perfect wake at any speed. To give an idea of how much the hull is valid, the maximum list at full speed (24 knots, during RINA official trials) was a mere 2.5°. As far as the noise/vibrations levels are concerned, they are very close to the ones of a displacement vessel. Polaris, in spite of her planing forms and thanks to the technical solutions used on board, has obtained the RINA Comfort Class.” 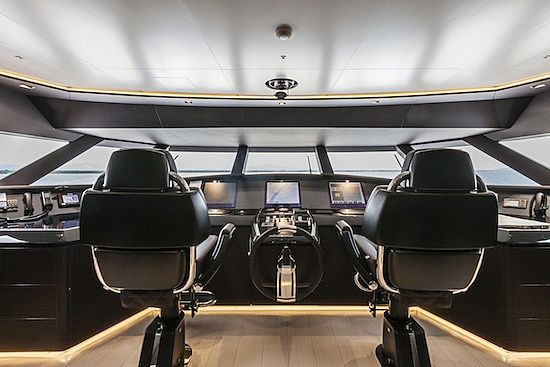 From the meticulous study of lines and shapes, proportions and ergonomics, Enrico Gobbi along with his team created a superyacht that with three decks plus a fly deck maintains a sleek volume that is uncommon to yachts of the same category. Exclusive panoramic views are guaranteed from all areas of the yacht thanks to the broad use of glass and notched sections along the main deck, particularly the nearly full-height windows in the saloon and full beam master suite. 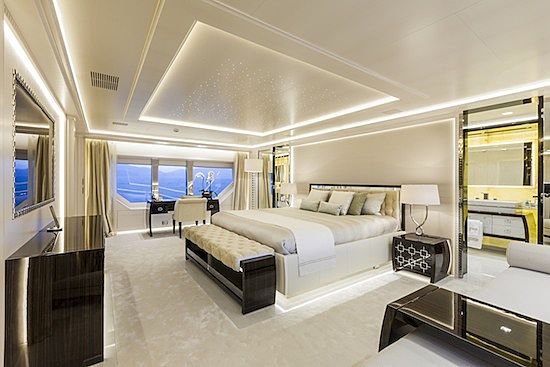 The yacht’s special appeal is conferred by the clever design of some sporty and dynamic details, recalling a military style, such as front windshields inclined 45° degrees backwards. This characteristic element is recalled also by further exterior details that follow the same inclination as the windshields, such as the side pillars in steel and glass and all the hull and superstructure window shapes. These details were designed to conceive some aggressiveness to the yacht. 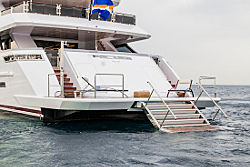 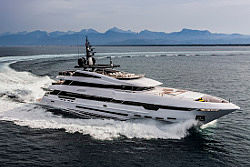 In a presentation on Polaris given by Enrico Gobbi of Team For Design, he described the boat as displaying, “elegant lines and a successful lay-out: the perfect union between style and functionality. A light aluminum semi-planing hull and superstructure and twin MTU 12V4000 M93L engines with 2,580 kW power make this 49 metre yacht a high-performance vessel.” 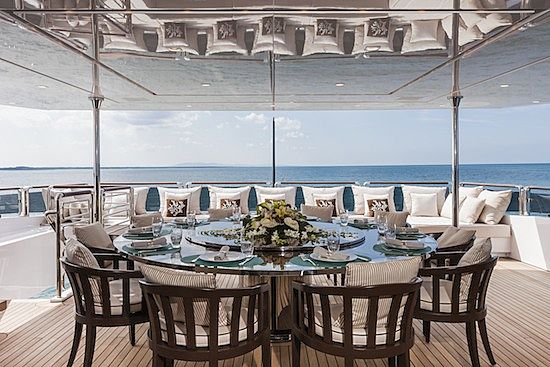 One of the main characteristics of the yacht is it’s very large sun lounge area integrated between the two forward muscles of the superstructure. This space guarantees maximum privacy due to its position and allows a magnificent panoramic view for all guests on board. Arguably the most important exterior area, however, is the fly deck. 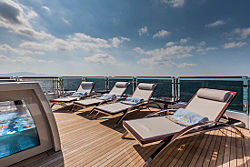 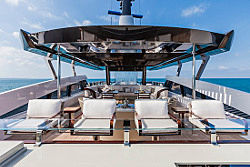 Enclosed by narrow shaped structural arches in which a large glass window has been inserted, the fly deck features a 3.5 metre long scenic pool with a front transparent glass partition and waterfall system coming down from the hardtop above. The entire area is characterised by luxurious details in teak wood and stainless steel inserts, whilst the inside of the pool has been decorated with Italian made glass mosaic tiles. 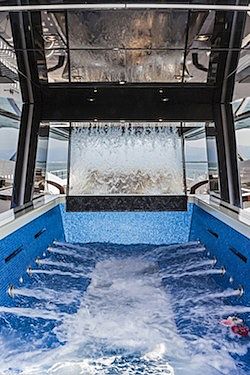 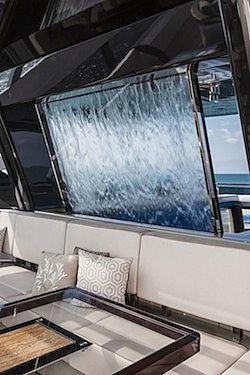 The interior style of Polaris displays a balanced compromise of modern and contemporary influences, with an eclectic hint inspired by the client's personal tastes, not least accompanied by precious coating materials that definitely convey to the interiors a timeless elegance and luxurious feeling. 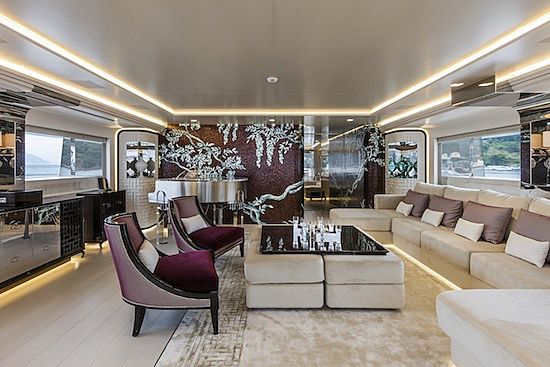 Natural materials such as glossy dark Ebony wood have been skilfully applied in combination with ivory Maple wood and precious ivory white coloured leathers. The choice of natural elements creates a play of light and dark enhanced by marble that infuse the vessel with its own well defined personality. A particular touch of modernity is given by some details on furniture and walls in polished stainless steel garnished with decorative studs. 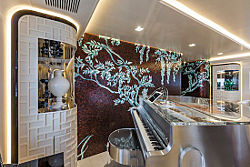 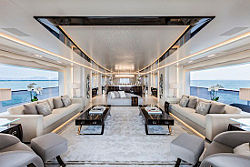 Enrico Gobbi and his team invested a lot of attention to detail, conferring to the whole interior a luxurious and distinctive yet warm and welcoming atmosphere. The décor of all areas plays a fundamental role in conveying to the yacht its eclectic and exclusive style: cottons, silks and velvets have been selected by Enrico Gobbi among the exclusive Armani Casa textile collection. Artworks from Venice, made in Murano glass, have been placed in important focal-areas of the yacht, and emphasised by a clever lighting scheme. A selection of artistic paintings including two rare examples dating back to the 18th century enhance the lobbies. 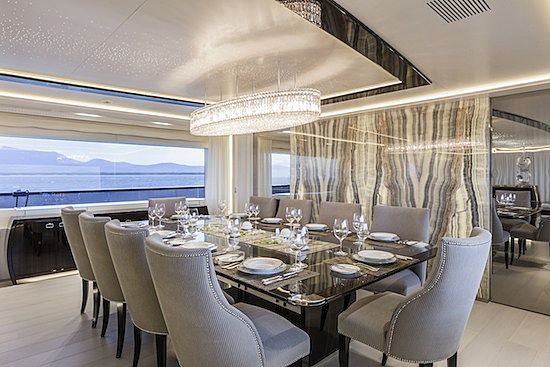 The yacht's main lobby gives an impressive welcome. The contrast between light and dark materials, along with the stunning lighting scene, surround the centrally placed custom made Swarovski crystal cascade chandelier running from the upper deck down to lower deck guest area. 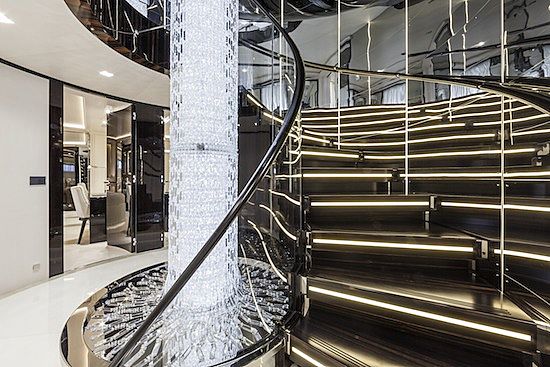 Polaris accommodates 10 guests on board with the possibility of hosting an additional 2. Accommodation consists of four beautiful guest staterooms as well as the full beam master suite. Particularly luxurious, this room boasts almost full height windows encompassing the area, offering spectacular panoramic views as well as an abundance of natural light. A crew of up to 9 is also accommodated for, ensuring a high level of service and relaxation, as well as the ultimately opulent superyacht experience. 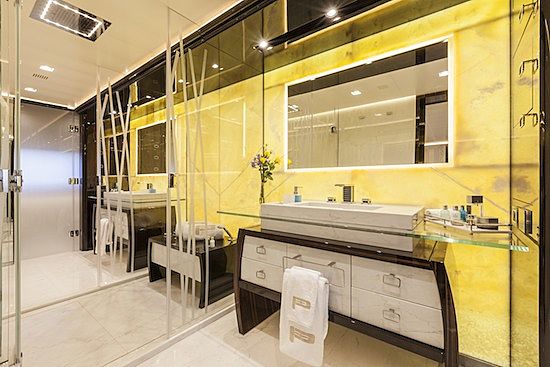 She is powered by twin MTU 12V4000 M93L engines with 2,580 kW power, giving her a maximum speed of 24 knots with a cruising speed of 19 knots at half load. She has a range of 3800 nm at 10 knots. Rossinavi will display the motor yacht at the upcoming Monaco Yacht Show held in September, and has already received an order for the third Prince Shark superyacht which is due for delivery in 2015. 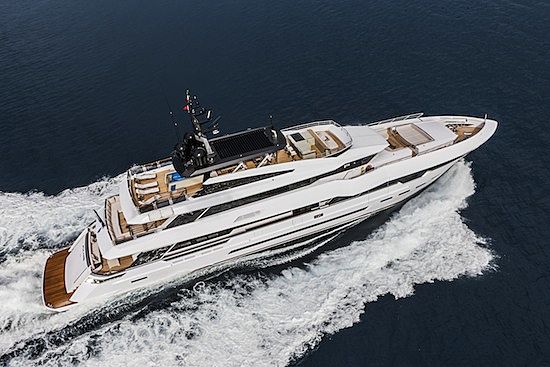