Home > News > Superyacht of the week: the 69 metre Saluzi

Built by the Australian shipyard Austal in 2003, the 69 metre motor yacht Saluzi has seen somewhat of a transformation since her original build, with an extensive refit completed in 2013 by Horizon Yachts. She features naval architecture and exterior design by the in-house team at the shipyard, whilst Luiz de Basto Designs were responsible for her luxurious interiors. She is a former luxury cruise ship who spends her time predominantly in Asian waters. We stepped on board this week in Singapore, during the Singapore Yacht Show, where we met up with Yachtzoo, who offer the yacht for charter in the region. 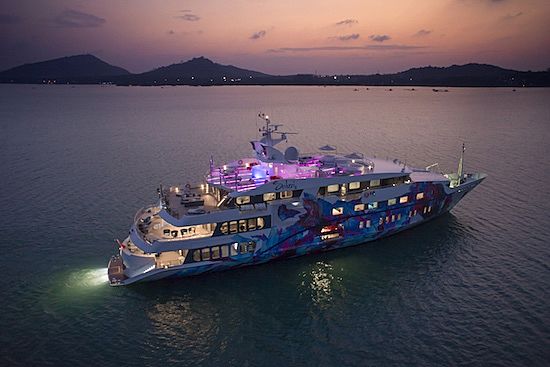 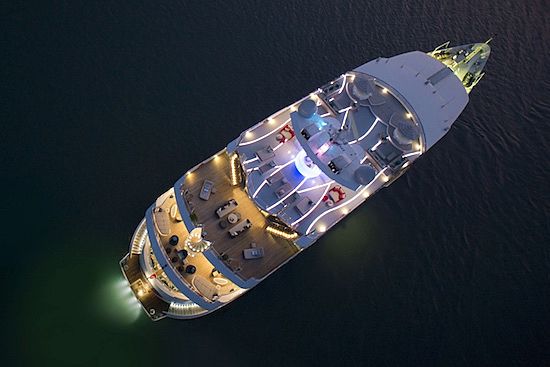 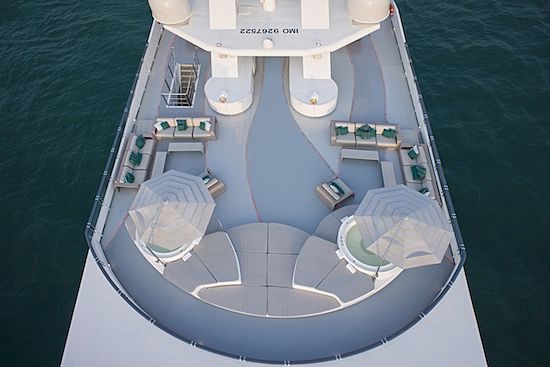 Originally named Tia Moana, her new name is reportedly based upon a mystical warhorse of Tang Dynasty Emperor Taizong that, according to legend, despite being wounded in battle by an arrow amidst fierce fighting, the horse unflinchingly delivered the Emperor back to safety. The artwork of the horse on the exterior of the yacht has been specially created by the artist, Li Jiwei as a modern interpretation of the ancient tale and in his own words, Saluzi is, “an expression of both East and West, a blending of spirituality and materiality.” 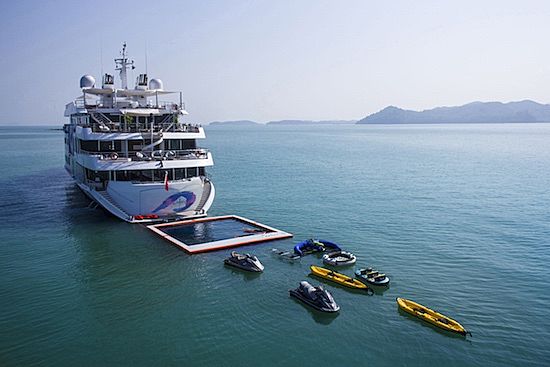 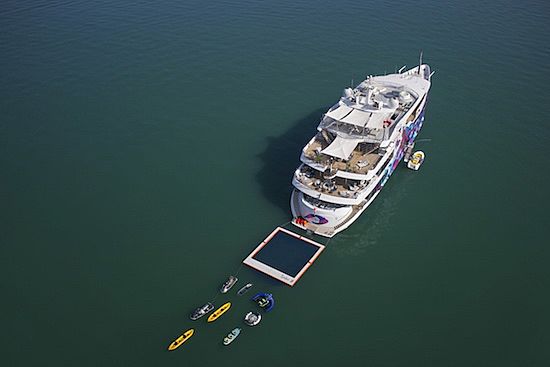 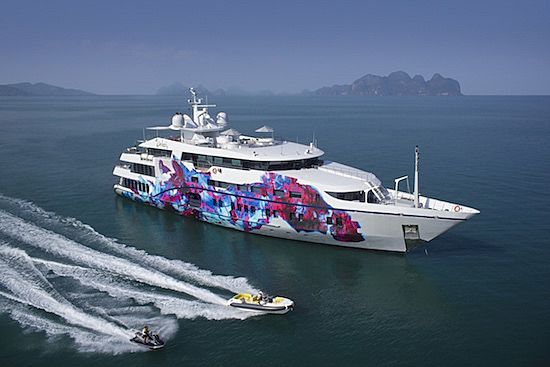 Inside, her interiors are styled in a modern Beach House theme, with an abundance of original and innovative features. The refit project included modifying the previous 37 medium-sized staterooms to 16 spacious staterooms, which consist of two master suites, 7 VIP cabins and 7 deluxe cabins, all spread over an impressive area of 1,650 sqm across five decks in total. A crew of 32 are also accommodated for on board. 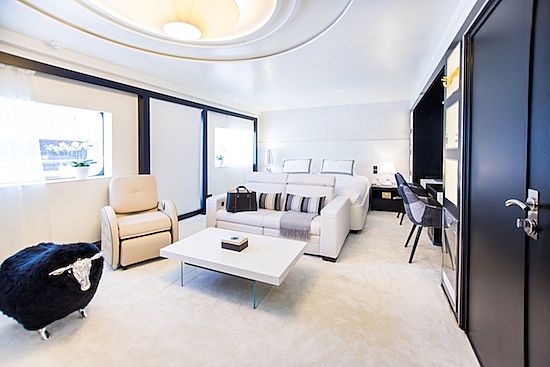 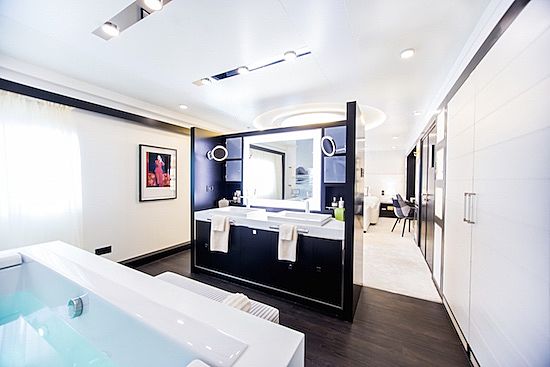 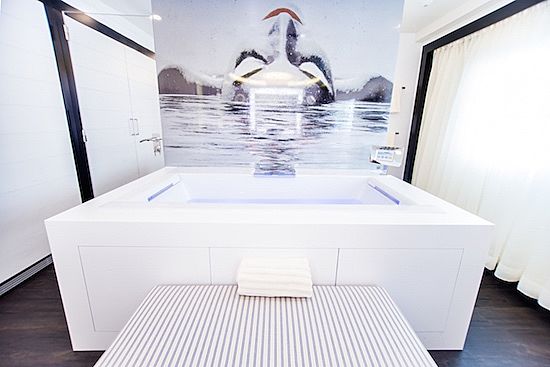 Luiz de Basto was in charge of the interior refit of the vessel. The result of the Miami based yacht designer and his team’s work is truly stunning. “The briefing for the Saluzi interior team was, from day one, to think different, to be original. Although we did not know exactly where this would lead, the owners knew exactly what they did not want. They did not want to play it safe, they were not afraid to take risks. It was a good time for us to be creative, to get inspired”, says de Basto. 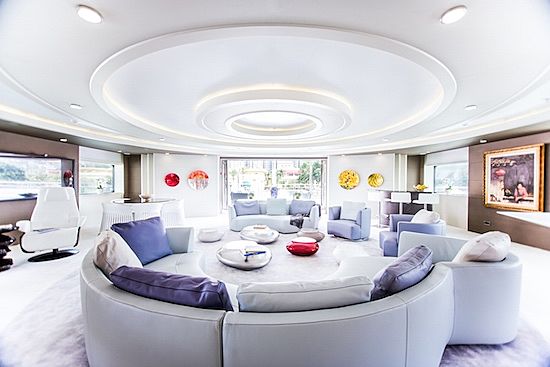 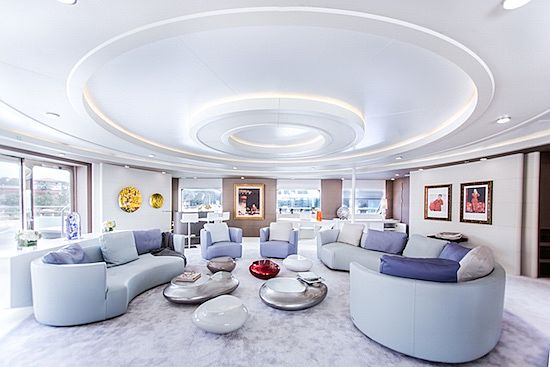 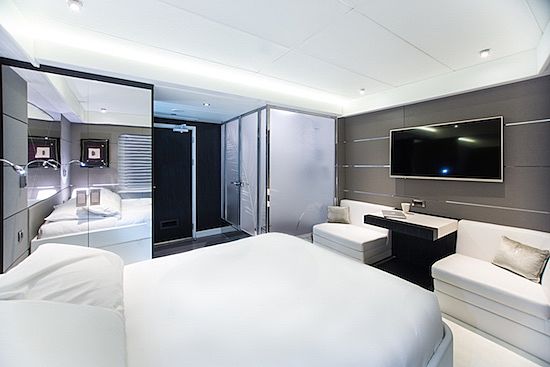 The list of amenities on board Saluzi is seemingly endless, with vast deck and living spaces for her guests to enjoy. Her sundeck, as an example, includes two Jacuzzis, as well as ample seating and dining areas. The whole of this area looks fresh and light, with white furniture dotted with splashes of turquoise from cushions. Two small, circular dining tables are also found here with bright red chairs surrounding it, making the perfect space to enjoy casual al fresco dining. 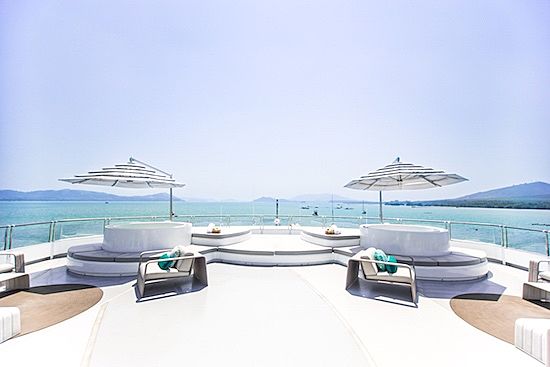 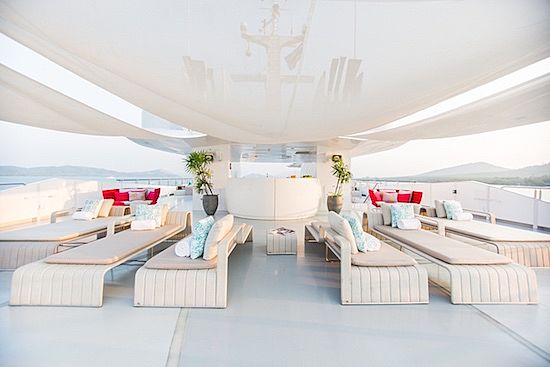 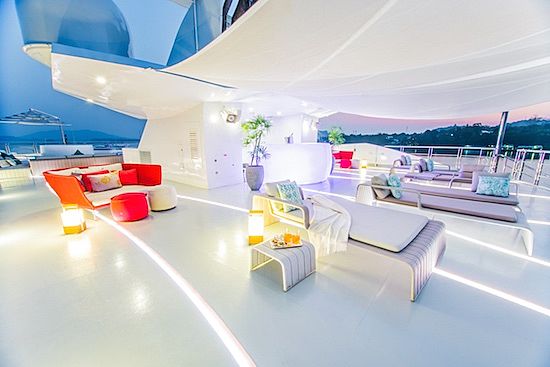 Aft on the 280 sqm deck are several dedicated sunloungers and, one of her most notable features, is the dedicated cinema which provides a sociable, relaxed night’s of entertainment. Moving on to her bridge deck, further sunloungers and a seating areas are found, flowing seamlessly into her bridge deck salon of a 81 sqm, which then leads on to the two master suites, each including expansive bathrooms each of 18 sqm. 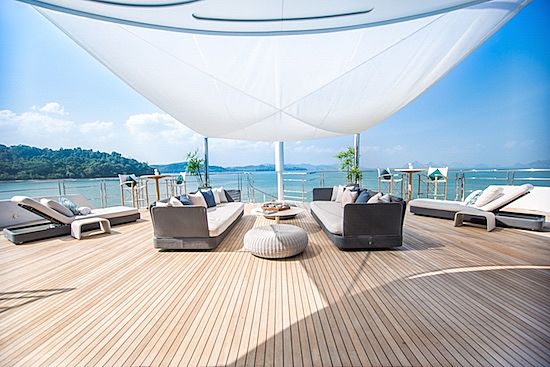 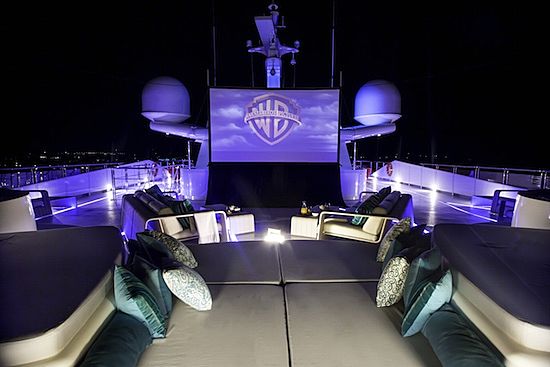 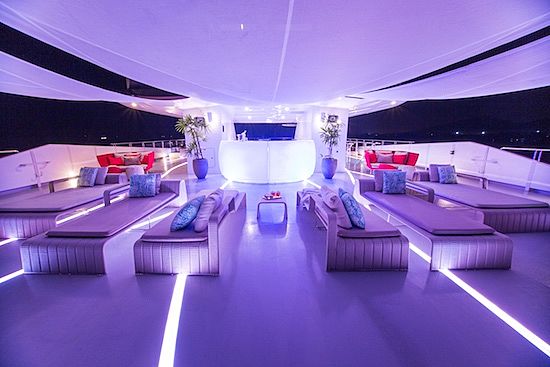 On her upper deck, six of the seven VIP cabins are found, as well as the large gym with modern facilities. A beautifully decorated wet/dry spa is found directly next to the gym. Also in this area is a large salon, with plush white sofas, and a large entertainment system. This leads out to the upper deck aft, containing yet more seating areas for guests to enjoy. 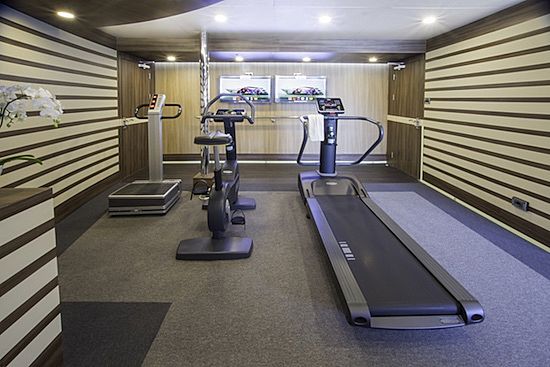 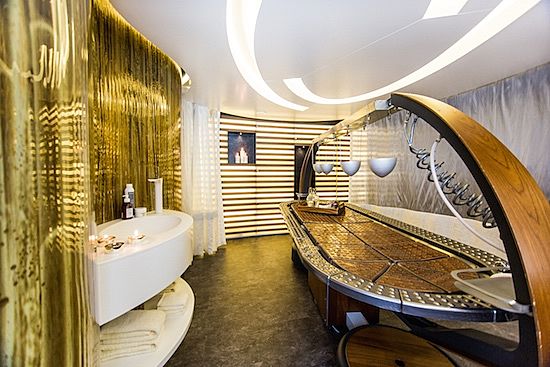 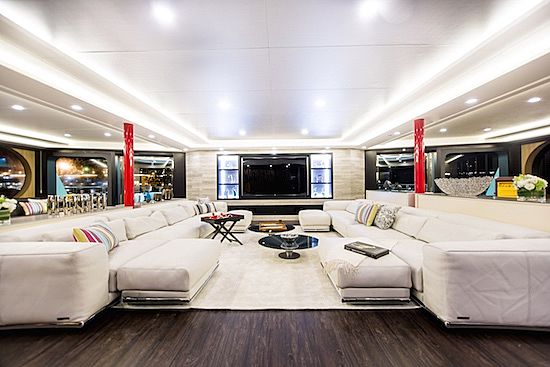 On the main deck, a luxurious and unique dining area is found. The dining tables are separated in order to fit all guests at the same time, with different coloured chairs dotted around. The whole space is inundated with natural light from the large windows that surround it, providing spectacular views over a formal dining experience. In the main deck salon, the furniture is bright and colourful, with eye-catching patterns and a beautiful overhead lighting system. The last VIP cabin is found in this space, as well as the seven deluxe guest cabins. The main deck aft provides another space for guests to enjoy al fresco dining in a shaded area. 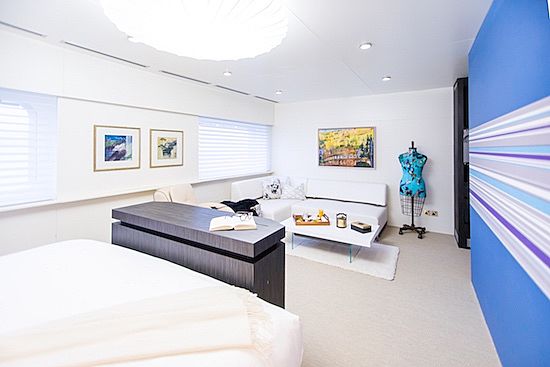 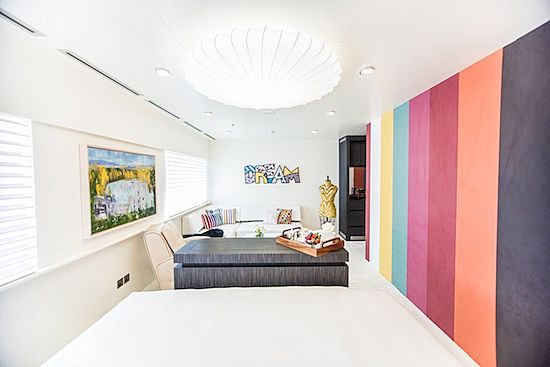 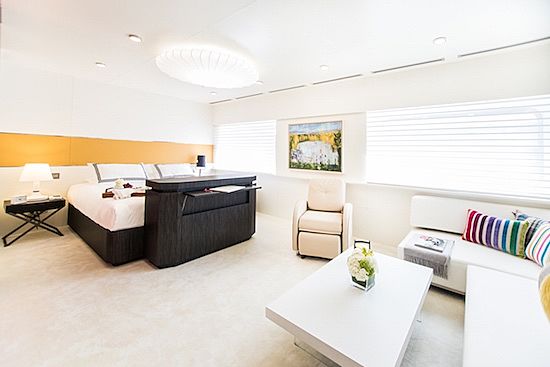 In addition to her wealth of facilities on board, Saluzi also comes with an equally impressive amount of water toys - the ideal addition to any charter yacht. The long list consists of a 2 seat Yamaha FX Cruiser Jet-Ski; a 2 seat Yamaha FX Jet-Ski; two Hobie Cat Sailboats; two Cayago F7 Seabobs; one Cayago F5 Seabob; three wakeboards; two paddleboards; a surfboard; a knee board; water skis; towable toys; a kayak with a glass bottom; fishing equipment; snorkelling equipment; floating pool and a waterslide. With a dedicated crew of 32 catering to guests’ every need, it’s almost impossible to imagine that any guest upon Saluzi could spend a minute anything less than entertained. 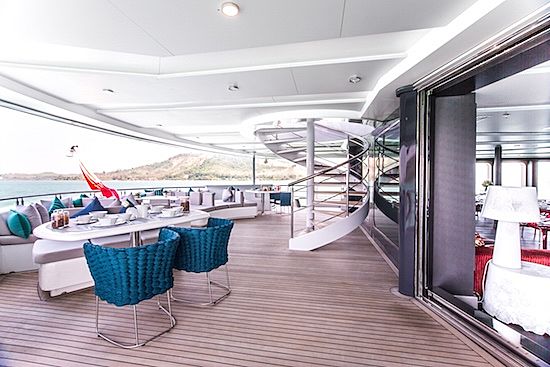 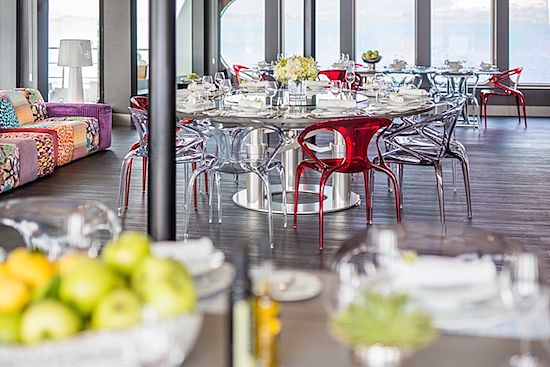 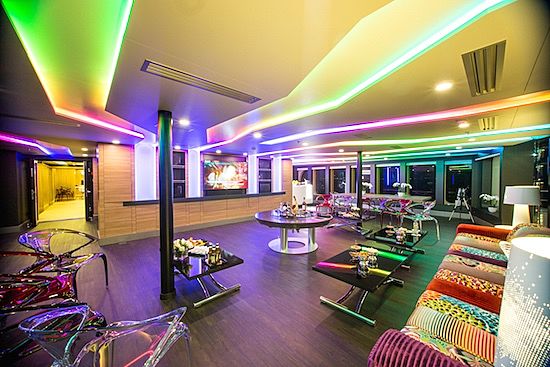 With an aluminium hull and superstructure, Saluzi features an ultra- modern stabilisation system to reduce roll motion effect and ensure ultimate comfort. With a cruising speed of 12 knots, a maximum speed of 16 knots and a range of 1500 miles, she is the perfect combination of performance and comfort. 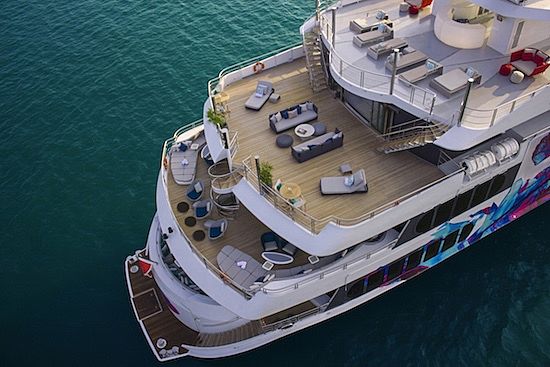 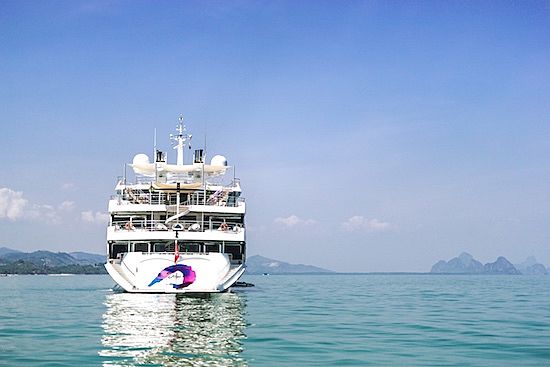 Saluzi was presented at the upcoming Singapore Yacht Show, which will take place at the end of the month. Speaking of presenting the vessel and promoting Asia as a booming superyacht destination, Kirsten Ringsing, Founding Partner of Yachtzoo Monaco, says,“The yacht will stay in Asian waters. We have several charters booked later this month, including one in Japan, Japan to Taiwan. We have already had a successful charter in the Maldives, with clients who will rebook her, and we also had a great charter in Thailand.”

By Maarten Janssen and Gemma Fottles