Home > News > Superyacht of the Week: The Amels 171 Bel Abri

Its amazing boats don’t go there more often, but having recently been launched in Holland, the Amels 171 Bel Abri was not going to miss a chance to cruise the fjords of Norway. Against the towering backdrop of the ruggedly beautiful mountains which plunge into the icy waters of the fjords around Bergen, the 171-footer shimmered like a tiny jewel. It was a rare opportunity for the yacht to enjoy such spectacular surroundings before making her way south for a full season of charter work in the Mediterranean. 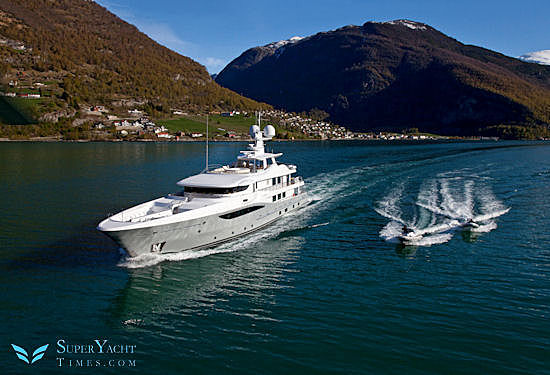 Bel Abri is the sixth hull of the Limited Editions Amels 171 range to be launched by the Dutch shipbuilder. Amels has honed the construction of these premium semi-custom yachts down to a fine art. Bel Abri was delivered on time and on budget. “We are very pleased with how smoothly the project has gone,” comments Amels managing director Rob Luijendijk. “For example, it is not unknown for some superyachts to take five days to pass their acceptance sea trial, and yet Bel Abri received full approval from Lloyds Register and the owner’s representative within a single day, something of which we’re very proud.” 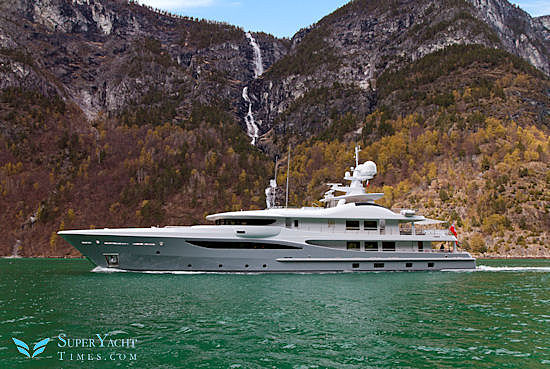 The owner of Bel Abri decided to order an Amels 171 on the advice of Monaco-based yacht management company, Imperial. Having already worked with Amels on previous projects - including another Amels 171, - Imperial’s chief executive, Evgeniy Kochman, knew that the Dutch shipbuilder would deliver on its promises, that it would keep the project within cost and within schedule. From start to finish, Bel Abriwas commissioned and delivered within two years. This is one of the key advantages of a premium semi-custom project, the ability to bypass much of the design work and trial and error that goes with a full custom yacht, and to cut the delivery time by half, and reduce the overall cost and time involvement required from the Owner. 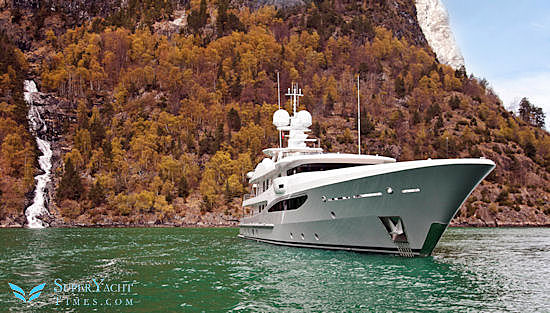 All in all, the owner’s representative said the project had gone better than he could have hoped for. “Initially the owner was not sure exactly what type of yacht he would like to buy,” recalls Kochman. “However, he did know that he wanted to buy a yacht of pristine quality and reputation that would be unique and amazing to sail, so he appointed Imperial as his brokers to conduct some in-depth research of the market and to come up with the best options for him". 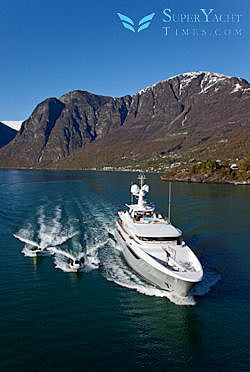 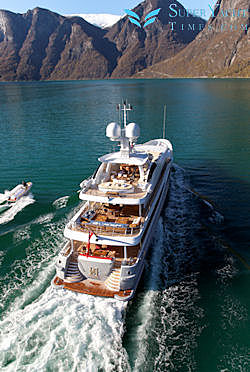 “At the time Amels had just launched the new Limited Editions Amels 171 series. The yacht caught our attention right away and clearly stood out from a great number of other options. After we had thoroughly reviewed specifications, renderings and various other data, it became clear that the Limited Editions Amels 171 was the best solution for the owner, as this yacht met all his expectations.”

However, Imperial then set their ambitions even higher. “Between Imperial and Amels, we jointly revised some of the technical characteristics,” says Kochman. “And for the design of the interior we appointed Laura Sessa from Rome. We really admire Laura’s attention to detail, and her ability to interpret a passion for the sea through her exquisite interior design.”

Sessa explains the thinking that went into the beautiful interior of Bel Abri. “Each deck highlights a different type of wood, such as maple, walnut and sycamore,” she says. “For example maple is featured on the main deck and zebrano on the bridge deck, with the dark wood sucupira running as a common theme throughout the whole interior. I find that on yachts of this size that the bridge deck is where the owner tends to spend the majority of his time, where he has breakfast with the family, and so we have white and blue colours in the fabrics to maintain that connection with the sea outside.”

British designer Tim Heywood drew the sleek lines of the Amels 171, taking his inspiration from the sweeping curves of Italian sports car design of the 1930s. “I aimed to achieve a look that I would describe as ‘athletically feminine’,” says Heywood. “Also, I incorporated some of the styling features that normally you’d only find on much larger yachts. I wanted the Amels 171 to feel like a very grand yacht. For example it has a fabulous 20-metre sun deck, which would not look out of place on a 60-metre yacht.”

While it is the nature of semi-custom design that many of the fundamentals of the yacht cannot be altered - for example the hull shape -, there is still much that can be changed, as Kochman explains. “During the construction period it was decided to change the layout and turn six guest cabins into five in order to create a magnificent and very spacious owner's suite of the kind that you would normally find on a 60-metre vessel.” 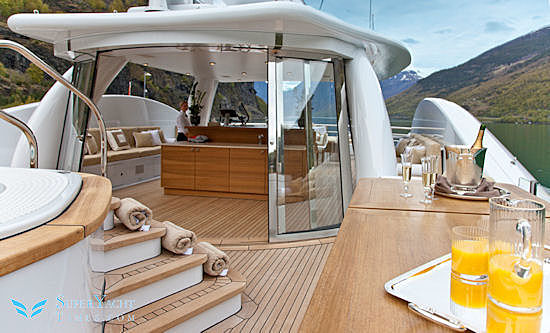 There is also a strong focus on outdoor living, with a larger-than-usual Jacuzzi, now an impressive 3000 litres volume, and a windbreaker on the sun deck. 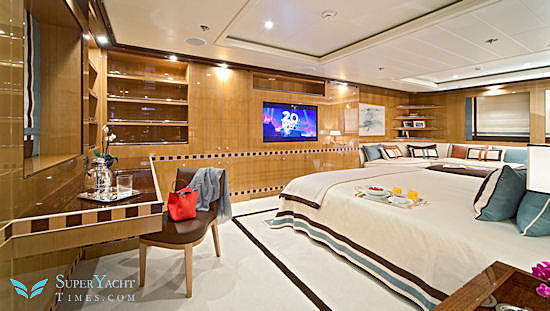 With accommodation for up to 12 guests and 13 crew, the layout and facilities of the Amels 171 have been designed to deliver very high standards of service to all the guests. “We believe it is important that the crew facilities are of the highest standard,” says Luijendijk, “because if the yacht looks after the crew, the crew will look after the guests.”

Captain of Bel Abri is Matthew Bryant. This is the second Amels yacht that he has captained. “The good thing about an Amels yacht is that everything works,” says Bryant. “That might sound obvious, but you’d be surprised how much can go wrong on a yacht as complex as this. Because Amels is part of the Damen Group, they have a heritage of commercial shipbuilding which you can see in an Amels luxury yacht. They use strong, reliable ship’s components which are easily man enough for the job, so things don’t wear out or fail because they’ve been tried and tested in harsher environments than we tend to operate in.”

Bryant also appreciates the work that Amels have put into ensuring the boat works not just for the owner and guests, but also for the crew. “The bridge of Bel Abri is the most user-friendly and functional space that I have worked in. It has all of the equipment you need, and none of the stuff that you don’t; it’s a pleasant space to work in. We have some nice, comfortable seats on either side of the bridge, so that the guests - and particularly their kids - can spend some time with us and see what we do when we’re working.” 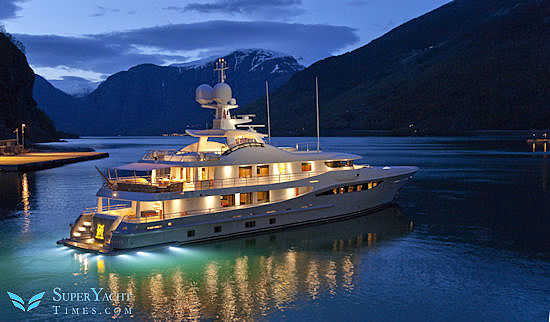 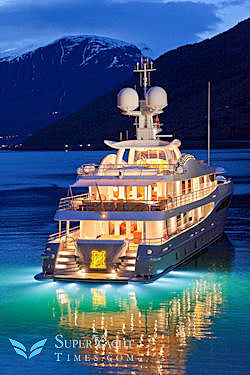 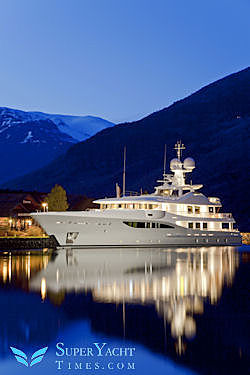 Bel Abri is the first of the Amels 171 range to be used for charter and within just two weeks of delivery she was already fully booked for the summer season in the Mediterranean. 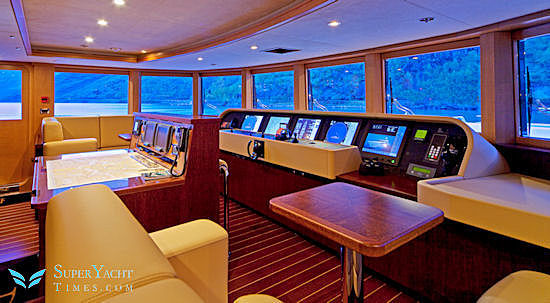 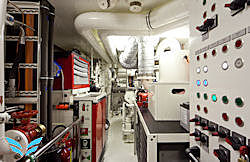 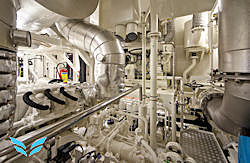 Evgeniy Kochman said the working relationship with Dutch shipbuilder Amels had gone extremely smoothly. “I had already worked with Amels on another Amels 171 project, but I never cease to be impressed with the company’s ability to meet every promise, and to deliver this beautiful Tim Heywood design to such high quality at such a competitive price.”

The images used in this article are copyright protected. They may not be used without written authorization by Amels Holland.