Home > News > SuperYacht of the week: the astonishing 119m superyacht A

For weeks a buzz had already been going through the yachting community about a new project at Blohm+Voss, when in December 2004 the German yard announced that they indeed had signed a contract for a new large motor yacht : project Sigma, a.k.a SF99, construction number 970 : a 119 m design by Philippe Starck, to be delivered in 2007. 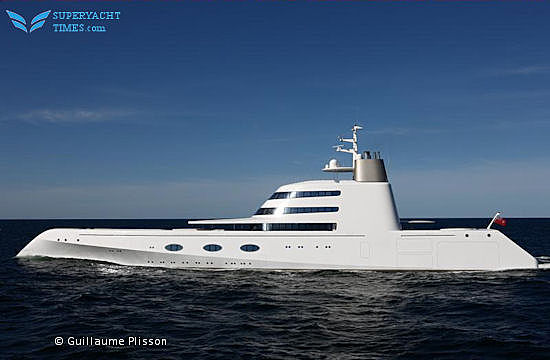 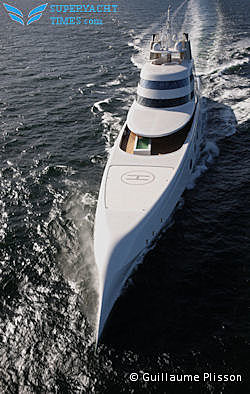 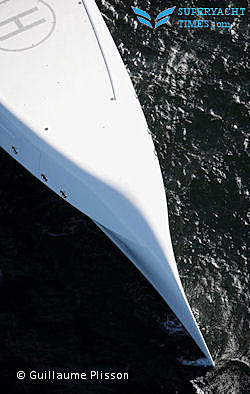 A rendering of an extraordinary design was forwarded together with the press announcement. It caused quite a stir: a futuristic vessel with an axe bow, a hull that made you think about a submarine and a superstructure that clearly resembled the lines of a sub’s conning tower.

Although project Sigma remained the talk of the town – her designer also contributed some parts of the puzzle in a few magazine interviews – silence reigned after the official press release. Until the 27th of December 2007... In the late afternoon, the doors of the giant shipbuilding shed at the HDW Shipyard in Kiel, part of ThyssenKrupp Marine opened to reveal a sneak preview of project Sigma and some onsite spotters were immediately at hand to spread the news around the world. 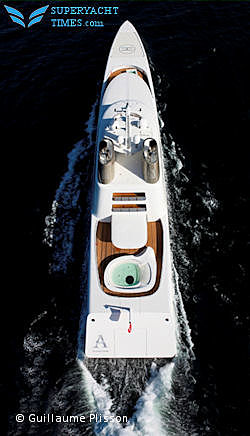 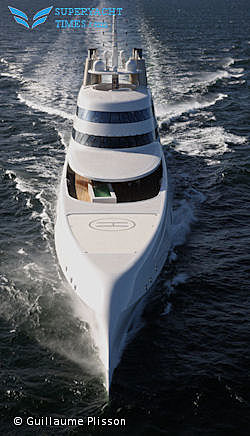 The pièce de résistance however was served on January the 3rd 2008 when the yacht was towed out of her cradle into the Kieler Förde and she presented her design to the world. The response was enormous and all yachting media, printed or digital, picked it up and announced the news. 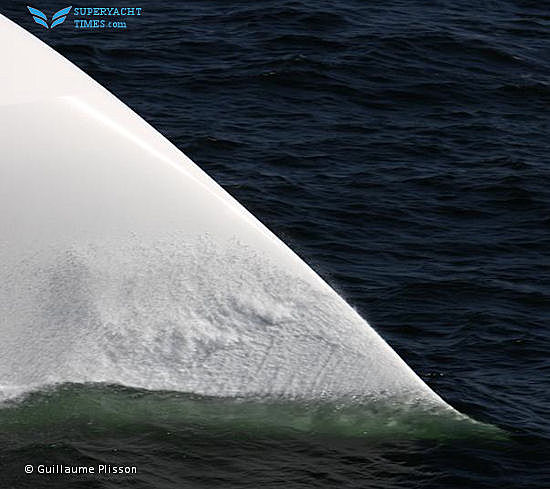 Although it was obvious that the yacht was nowhere near finished that 3rd of January 2008, it was clear that after the landmark yachts as Savarona, Katalina, Lady Moura, Golden Odyssey and the perennial design icon Eco, Blohm + Voss had once again pulled out all the stops on their project Sigma. 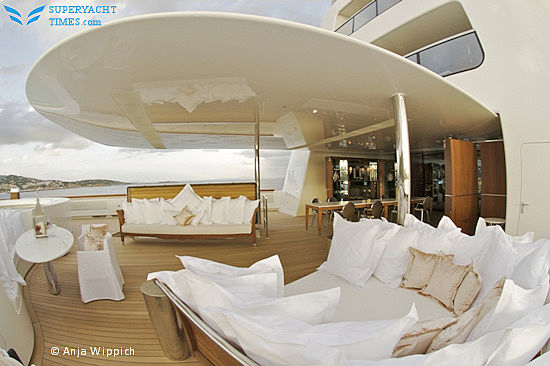 Slowly, more and more of the yacht was revealed : on the 18th of February 2008 she left the shed for a second time and we got a first view of her stern and the aft section of her superstructure. About a month later, March 10th 2008, project Sigma left the yard for her first sea trials in the Baltic Sea heading for Rügen and bearing the name SF99 on her stern. 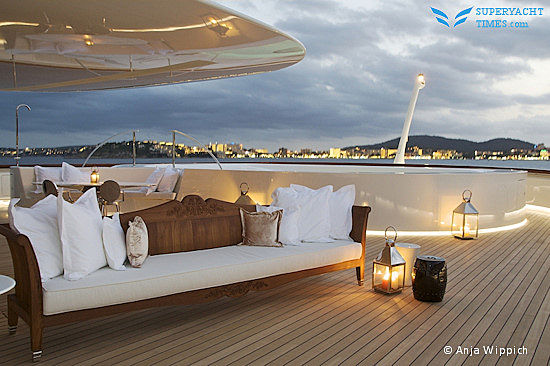 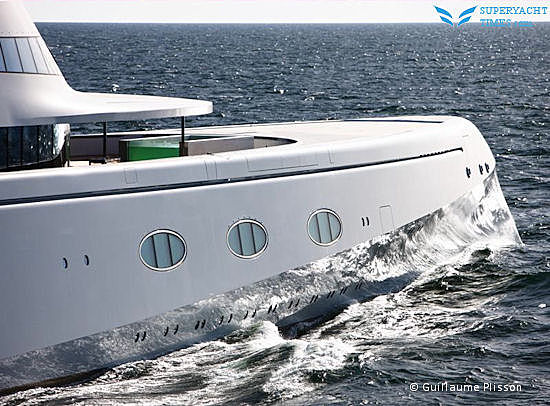 This astonishing yacht was designed by Philippe Starck with naval design by Martin Francis and Dirk Kloosterman acting as the owner’s representative, was the Project Manager. A was delivered, in the early summer of 2008, then the yacht went for a tour in Norway and later that summer entered the Med. After the summer 2008 season she returned to the yard for some more work and was re-delivered in early June 2009.

Her first trip of 2009 brought A back to Norway where she visited Bergen and went up to Flåm; a trip that provided some of the most exceptional photos of A so far. 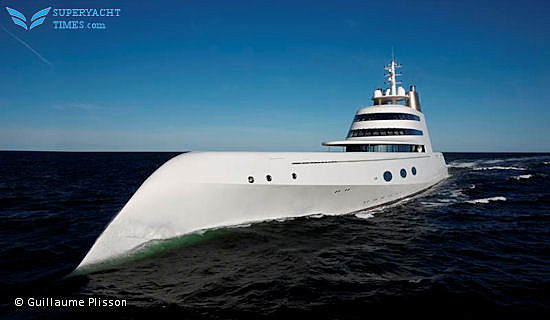 Back in the Med, photographer Anja Wippich was asked to undertake a photoshoot of the remarkable interior of the Starck masterpiece. 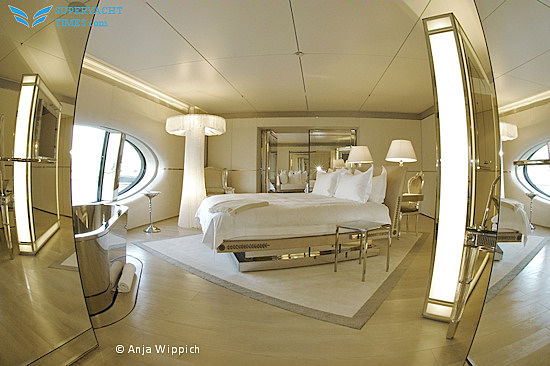 Superyacht Times is proud to present you with these interior photos of A. 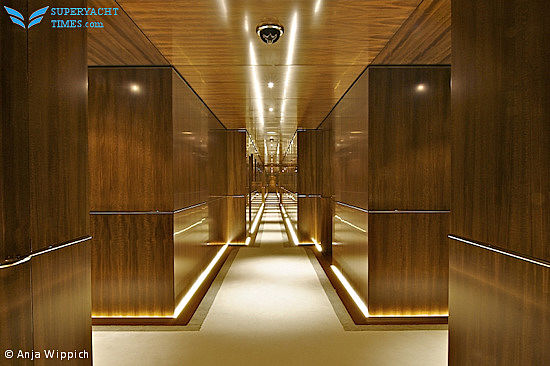 Pictures usually say so much more than a thousand words ever can, and therefore we can only advise you to sit back, relax and enjoy these images. 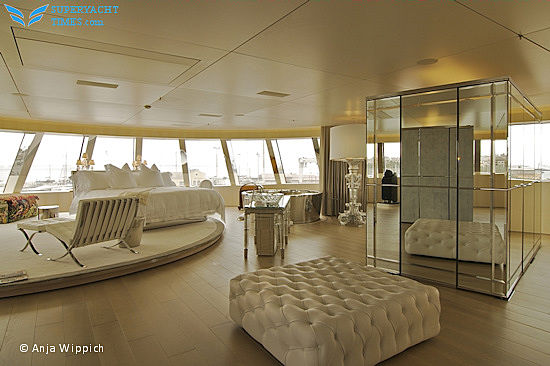 Starck not only designed the exterior but he was also responsible for the interior of the yacht. Where the Feadship, Wedge Too revealed how different Starck’s approach to a yacht interior was, the interior of A takes it even so much further : never before have we seen an interior like this. 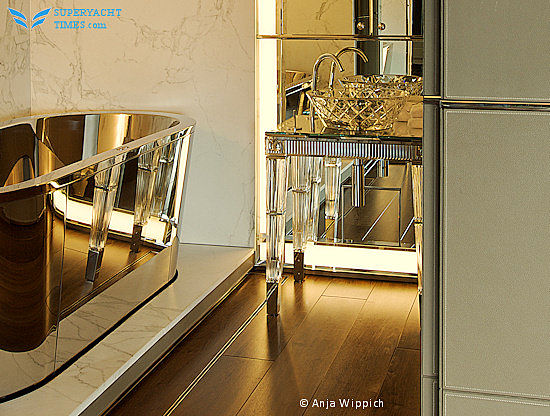 He describes the interior design as the elegance of intelligence and the result is so surprising that yachting journalists were at a loss for words.

You find remarkable things in this interior like a Jacuzzi inside the main salon, revolving beds in the main stateroom and some guest staterooms, lots of shiny metals and freestanding mirrors. 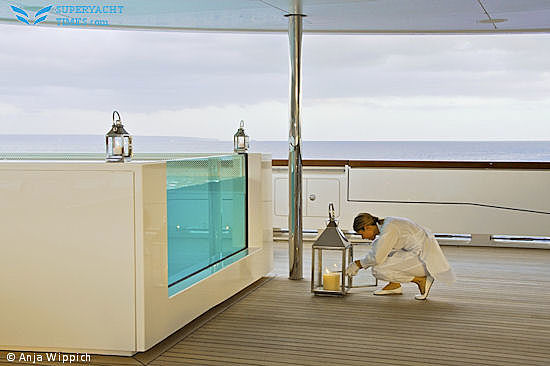 Apart from the Jacuzzi inside the main salon there is another aft on the bridge deck at the spa and wellness area. 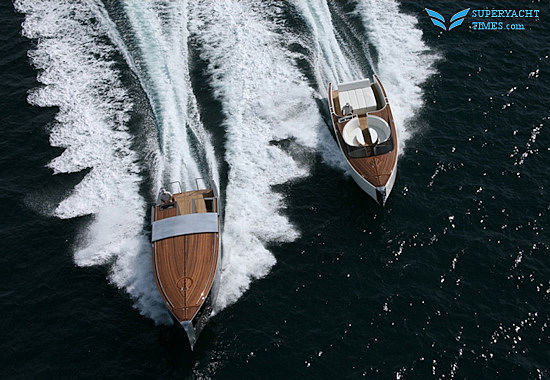 Of course a yacht like this also needs tenders and these were also designed by Starck : two 10 meter custom tenders by Vaudry Miller from New Zealand : and open tender and a limo version. 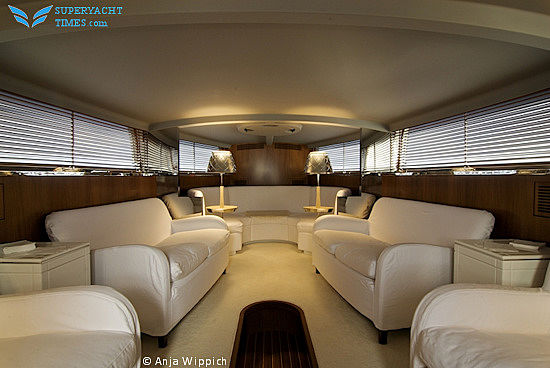 An exceptional yacht and a future icon for certain.