The 25.90 metre long range semi custom Long Island 85 series catamaran, WindQuest, was built by French shipbuilder, JFA Yachts, and launched in 2014. She features naval architecture and sophisticated interior design by Marc Lombard, and, for a yacht of her size, she offers unrivalled space and comfort onboard for a total of up to 8 guests. The fast cruising catamaran is the inaugural vessel in the series from JFA. 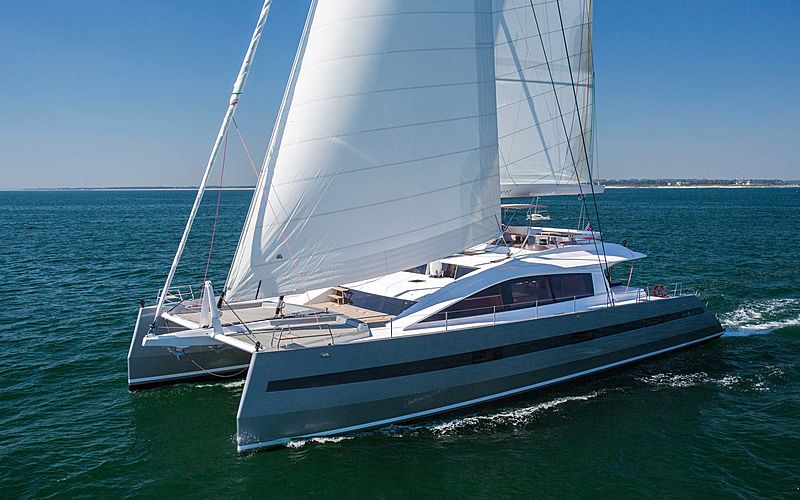 With the weight featuring as one of the main priorities when constructing the vessel, WindQuest has aluminium built hulls, with the deck built in composite material and assembled by bonding. This method was selected in conjunction with naval architect, Marc Lombard, in order to save on the overall weight of the yacht. As well as creating a lightweight yacht, this also presents several areas of advantage. One example is the fact that the hull will be prone to deforming rather than breaching in the event of a collision. 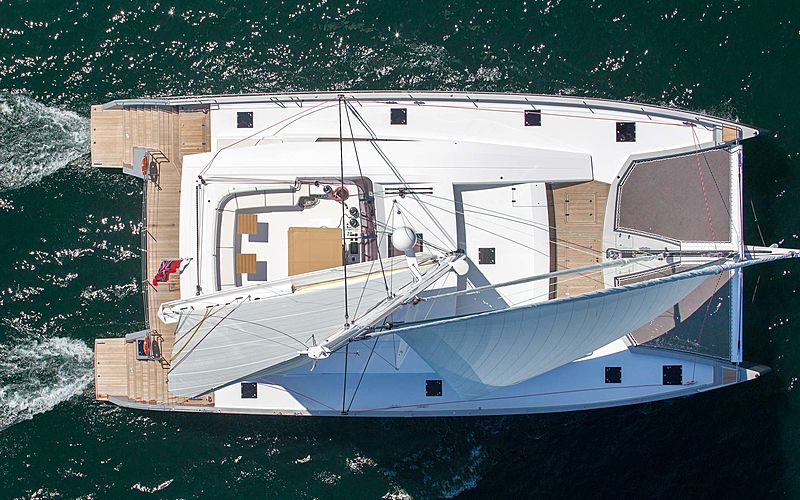 The 16’ tender stowed aft of the cockpit is launched using an ingenious system comprising a retractable pole in the main boom. This is, again, a weight saving method which optimises the weight without the use of a crane. In another bid to keep the weight of the vessel as low as possible, teak decking has been exclusively used only forward of the owners’ cabin and in the aft cockpit. 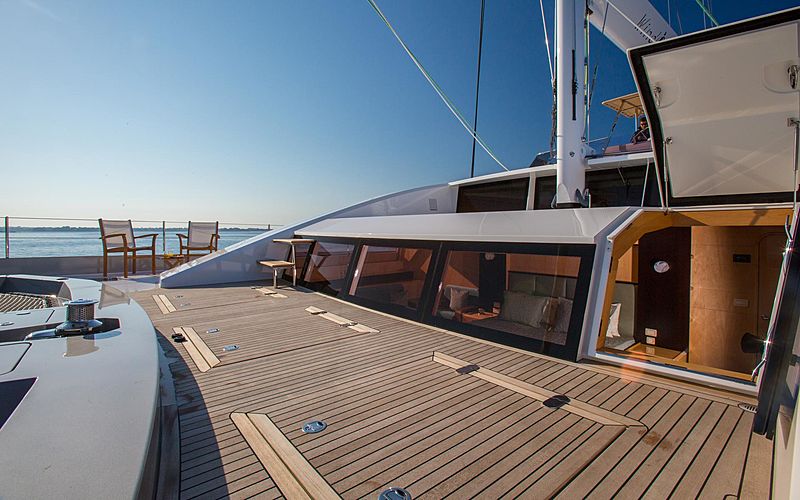 The large cockpit provides a comfortable seating area on starboard and another on port with a dining table. With a day head and sunbeds either side, this space is optimised for maximum comfort, convenience and relaxation. On WindQuest, this area has been customised, and the cockpit can be enclosed using removable panels of transparent canvas. The flybridge is the home of the outside helm and control winches, leaving room for another seating area and sunbeds. The helm station is set up against the bulkhead between the two indoor areas. The glass door aft, the large side portholes and the front windscreen create a luminous space down below.

Numerous deck lockers allow the stowing of fenders and mooring ropes as well as a good selection of tenders and water toys. Just some of the toys on board include inflatable SUP boards, snorkelling equipment and wakeboards. Two trampolines are located forward, perfect for fun or lounging and relaxation in the sun. On WindQuest in particular, a large garage opening on the aft platform has also been provided for stowing 4 bicycles. The water can be accessed easily via the hull transoms. 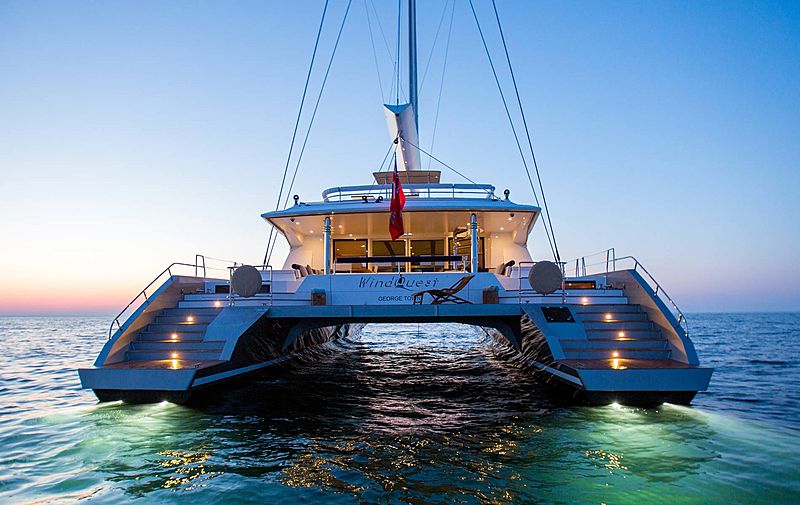 The ‘must-have’ exciting feature on board the Long Island 85 series is undoubtedly the owner’s cabin. Stretching across the full beam of the yacht, this exceptionally large suite offers spectacular panoramic views for the owner, a feature which is unprecedented on a sailing or a motor yacht of this size. The room includes a king sized bed, a lounge area with comfy sofa, a coffee table and a professional desk with a work station. The master bathroom features a 5 head steam shower, his and hers sinks and spacious closets. Just forward of the luxurious cabin is a private deck, an opulent feature which provides the owner with exclusive privacy on board. 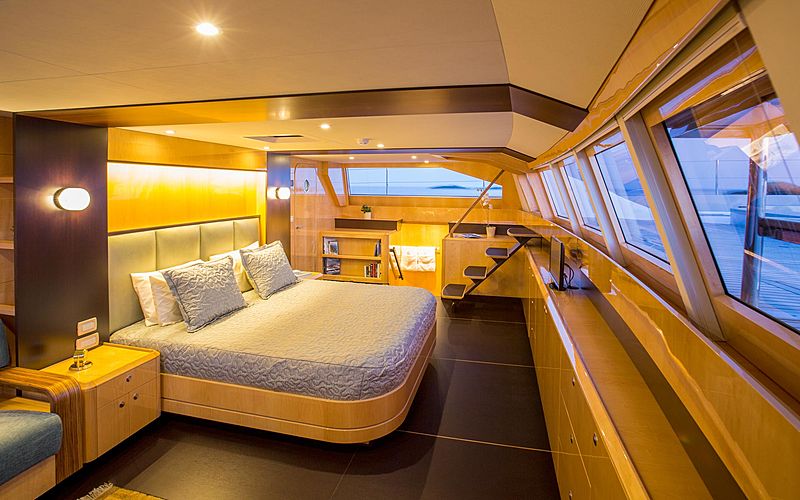 The two guest cabins on board the vessel are located aft as well as in the starboard hull, and are luxuriously decorated. Each cabin comes with a queen sized bed and private bathroom facilities. A total of 6 crew can also be accommodated on board WindQuest, which includes the captain’s cabin, crew cabin, a galley and less. as well as the crew quarter including the skipper’s own cabin, the crew cabin, the galley and mess. This semi-custom range, as is expected, lends itself to customisation and personalisation by the owner. On this first model of the series, the port hull houses the owners’ bathroom and spacious office, which can be conveniently converted into a guest cabin if needed. 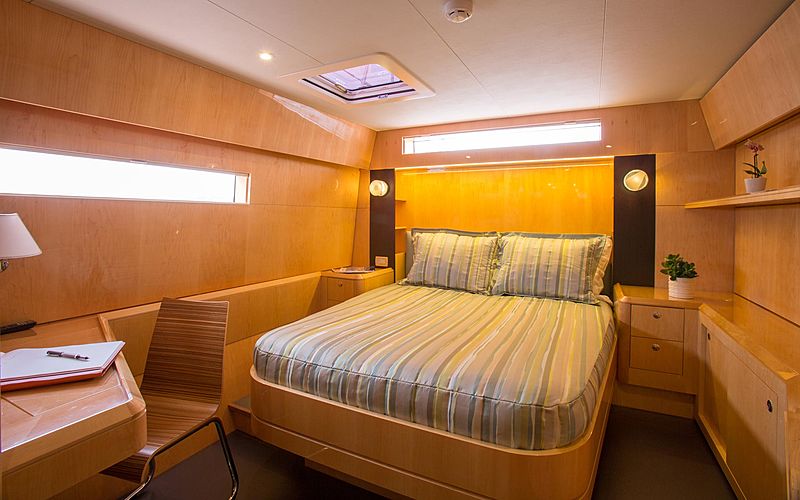 The Long Island 85 is available in 3 different versions in regards to accommodation and cabin layout. This includes the 3 guest cabins and an office layout like WindQuest, which has the potential of conversion into an extra space for guests. The other two layout alternatives include a 4 guest cabin and 5 guest cabin option. Regardless of the layout in which the owner has chosen for his new vessel, guests and crew are provided with an impressive total of 124m2 of floor space, large spaces that are usually reserved for much larger boats. 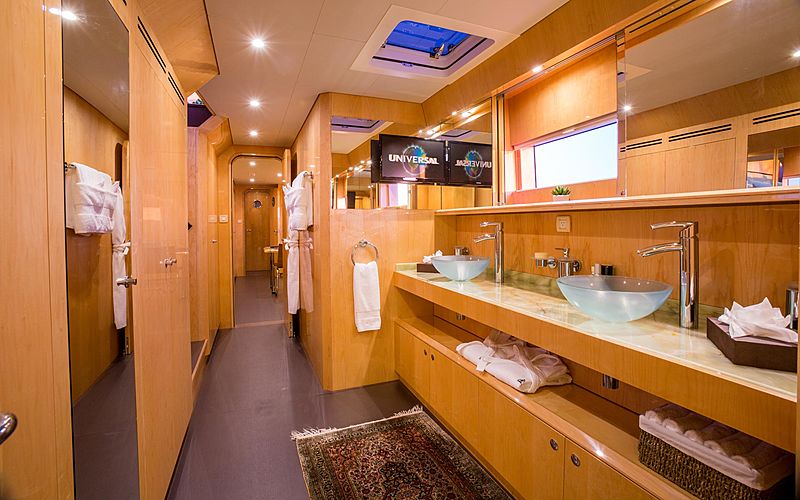 Elsewhere on board WindQuest is an extensive living room. The large table in the dining area provides space for up to 12 people to dine in style, and, together with the chairs and couches, is perfect for intimate parties and entertaining. The simple but effective colour scheme used throughout the yacht is pale browns, creams and honey. Maple and wengé have been utilised as the main woods, complimenting the peaceful interior palette perfectly. 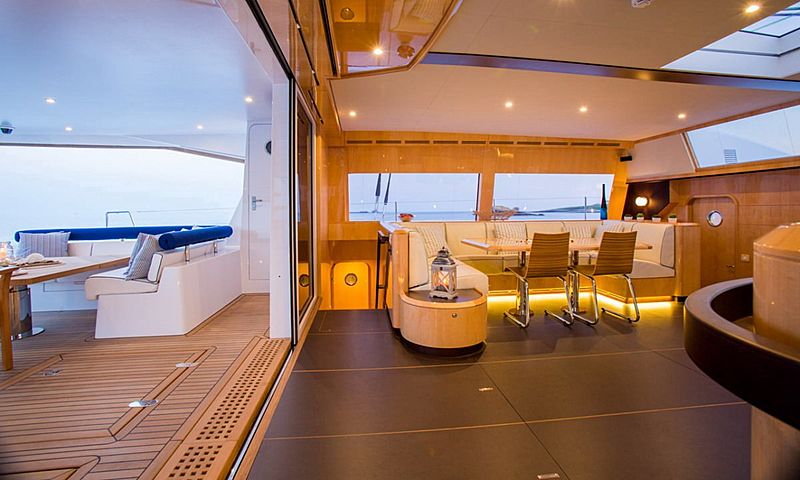 Fitted with a carbon mast and boom, her sail area is similar to that of a high performance sailing yacht, and she performs similarly to a 100’-110’ monohull. The only difference in terms of performance is a reduced draught, substantially more comfort and increased stability. The hydraulic winches installed on the flybridge are well suited to manoeuvring with a reduced crew. This yacht is equipped with 2 x 380HP engines and 2 x 27kW generators which provide her with an economical speed of 8.6 knots for a fuel consumption of 21 l/h. She has a maximum speed of 12.9 knots. 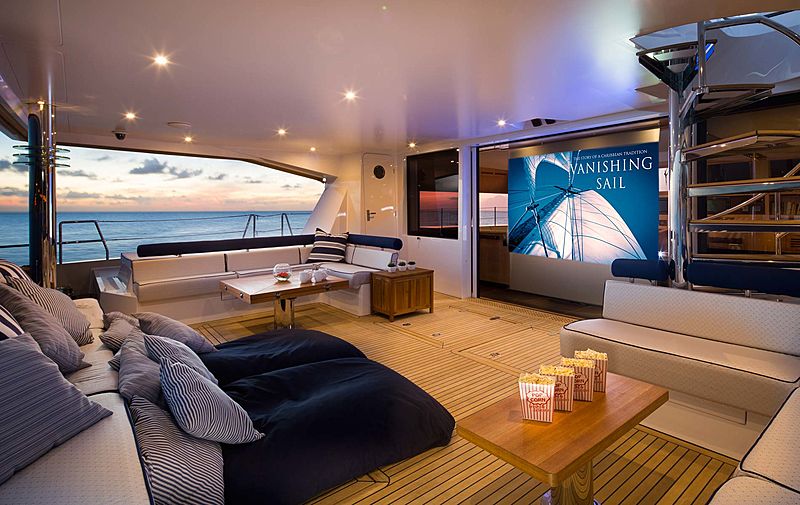 Delivered to her owners in June of this year, WindQuest had her maiden voyage in southern Brittany and will sail along the coasts of the English Channel and of the Atlantic between London and Lisbon before heading for the West Indies in October. 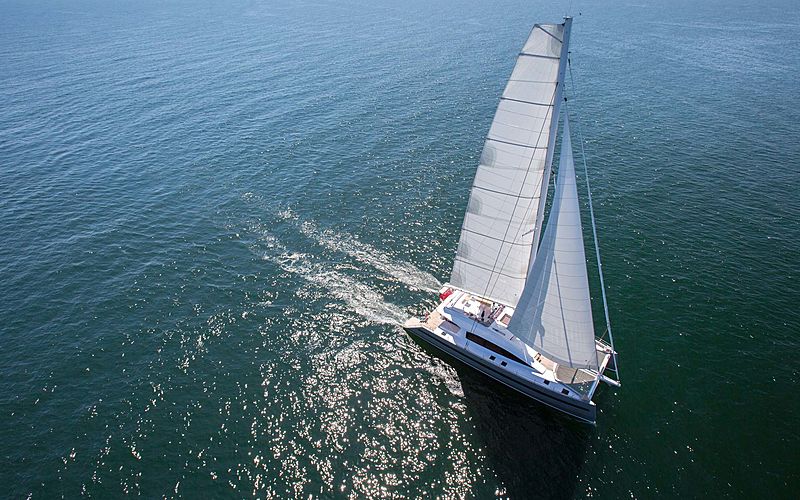