Home > News > SuperYacht of the week: The Moonen 124 Northlander

The Moonen 124 evolved several years ago out of a preliminary design for a Moonen 120. At the time, the Moonen 120 was to be the largest of a new Displacement Series being developed by Moonen and René van der Velden Yacht Design. When the hull was stretched to 124 feet, as the design evolved with the client's valued input, Stolk Marimecs re-calculated the naval architecture and approved the hull at the new length and displacement. 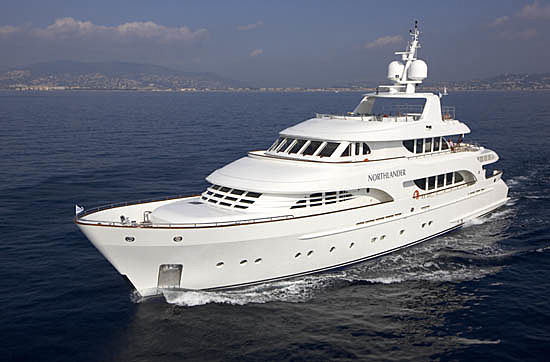 The Moonen Displacement Series was initiated with the 2001 launch of the Moonen 72 Lady Jalinka, and has progressed through the Moonen 84, 96, and 97. The Moonen 124 is clearly the new Queen of the Fleet. According to René van der Velden: "The Moonen 124 is a sleek-lined motoryacht following the existing Moonen form 'language,' with gracefully balanced bow and stern, attractive fashion plates, and low superstructure profile. She was destined to become the new Moonen flagship, since at that time she was the largest size Moonen could build." (With the 2008 addition of the new Groot-Ammers facility, that limit has now grown to about 150 feet.) 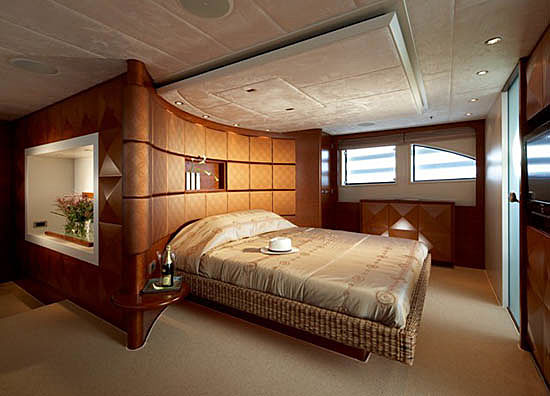 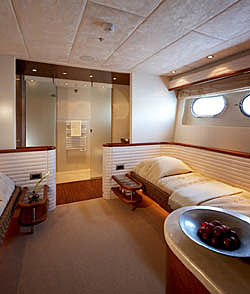 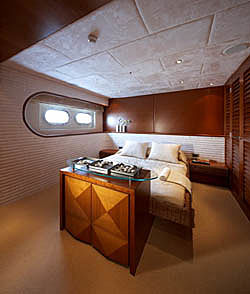 The Moonen 124 design has many features that are attractive to owners, captains, and crews, which make the yacht an ideal platform for charter as well as private use. She is the first Moonen yacht with a four-deck central atrium and spiral staircase. Her layout features a main-deck master suite forward. Below, two double and two twin guest staterooms centre on the stairs, with crew quarters well isolated forward. 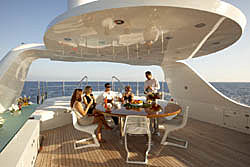 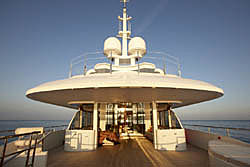 Additional features include a large sun deck with a Jacuzzi and wet bar, a rescue boat stowed on the main deck forward, and conning from the wheelhouse or bridge wings on the upper deck. Below, in addition to the extremely spacious guest staterooms, there is an enclosed engineer's control station adjoining the engine room, and a tender garage with an updated version of Moonen's unique tender deployment system. 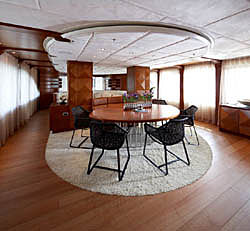 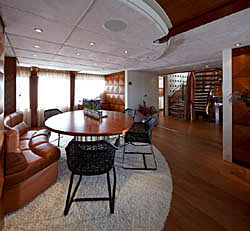 The interior of the Moonen 124 was designed by Art-Line Interior Design, which made full use of the volume. They began from the premise that they would keep the atmosphere within the Moonen "quality look," meaning they would translate their experience in designing many Moonen yachts into a three-deck configuration, yet keep the relatively cosy proportions of a typical Moonen. 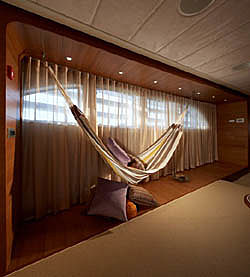 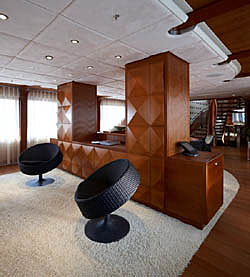 The first Moonen 124 (which was sold to a new owner as it was near completion) features what Art-Line calls "fusion" styling of western cherry joinery "spiced" by Oriental details and some unique decorative items as fine copper-mesh floating sculpture, and handsome pyramid-shaped panel sections that add visual strength compared to more usual flat-panel bulkheads. 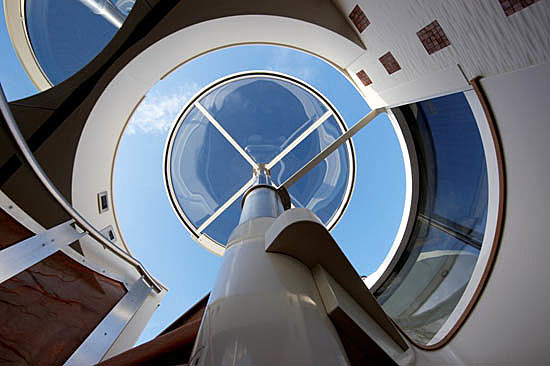 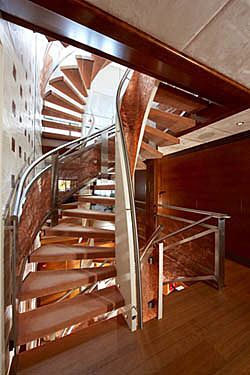 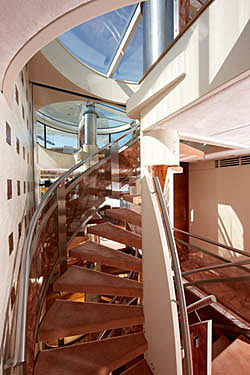 The yacht's central feature, literally, is its central staircase running from the accommodations deck to the sun deck. It is encompassed by a mirrored atrium, and topped by an opening skylight that gives access to the sun deck. Equally important, it allows a column of daylight to brightly fill the yacht's heart. Thus, the main- and bridge-deck saloons, surrounded by windows and doors on three sides, benefit from light pouring in on the fourth (forward) side, a rare feature in any yacht. 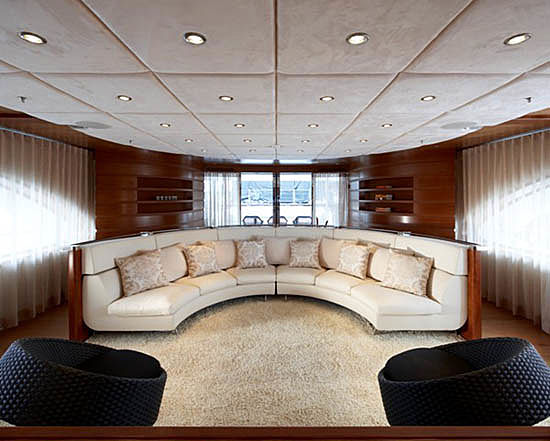 Art-Line created a "subtle summer feeling" using lightweight material surfaces such as woven cane. For countertops, overheads, and bathroom floors, they used kirei board, a sturdy material pressed from fibres of processed soybean plants (a very "green" component in this new age of environmental sensitivity). 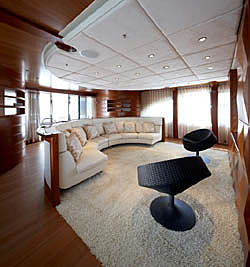 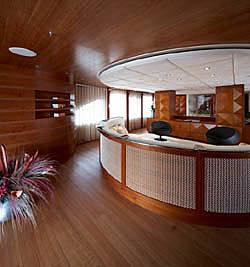 The main saloon is a "soft island retreat" with dining and lounging separated by a bold rectangular arch. The indoor space is surrounded by wooden side decks under full-height windows that, again, maximize natural light. 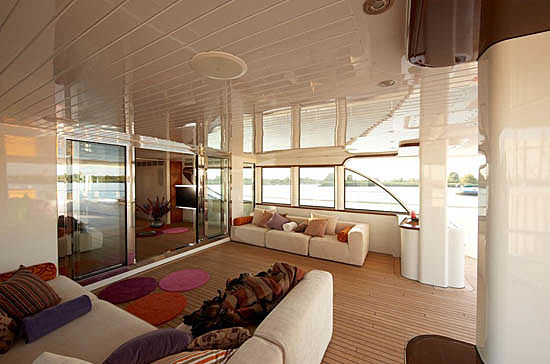 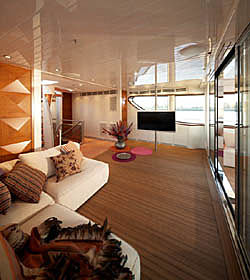 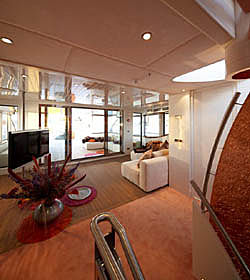 The bridge-deck saloon has been uniquely configured as an extension of the unusually large outdoor afterdeck lounge, rather than the more common reverse, to emphasize outdoor living. Bright sunny colours in upholstery and decorative pillows are set off by Moonen's carefully executed joinery. The galley and pantries are served by dumbwaiter, ideal for chartering. But everything else in the atmosphere has been considered to create a perfectly private family retreat for the owners and their guests. 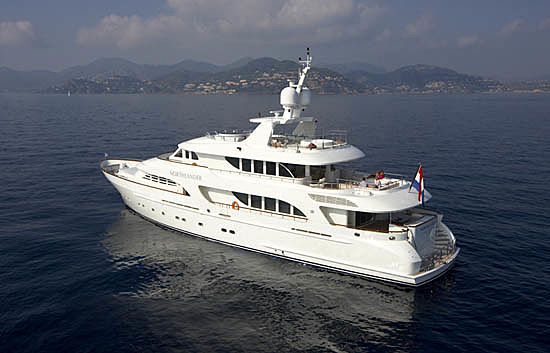 In sea trials before turnover to her owners, Northlander exceeded her design specifications with a measured top speed of 14.5 knots. At cruising speed her economy was also better than predicted, and her range at economic speed as well. Her sound-level measurements were remarkable, with as little as 33 dB(A) measured in the owners' and guest suites, and even lower in the crew quarters, at anchor with one genset running. Under way, with main engines running from 1430 rpm to 1845 rpm, the owners' suite measured a still-remarkable 44 dB(A) to 54 dB(A). 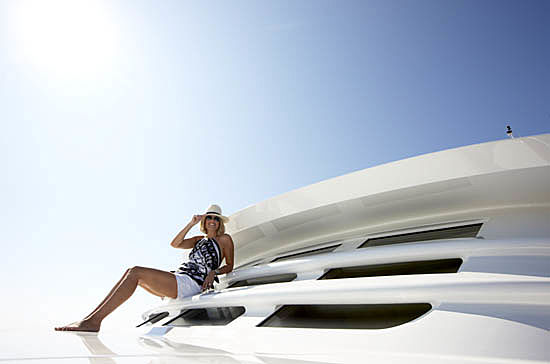 During her trouble-free maiden voyage from The Netherlands to the Monaco Yacht Show and back, the crew experienced some rough seas, and the usual Force 8 in the Bay of Biscay. She is reported to have ridden smoothly in waves, remained comfortable and quiet, with no apparent vibration. After the round trip her captain said simply: "She is a lucky boat"