Home > News > Superyacht of the Week: The Princess Antheya III

Anyone who is familiar with the success of Princess Yachts’ flagship 40M series would find it as no surprise that this British yacht builder has, as an evolution of this luxury performance range, decided to create a 35 metre version. First unveiled during the glittering 2015 Cannes Yachting Festival, Antheya III took centre stage as she wowed the crowds with her sleek exterior, innovative layout and surprisingly spacious and luxurious interior. 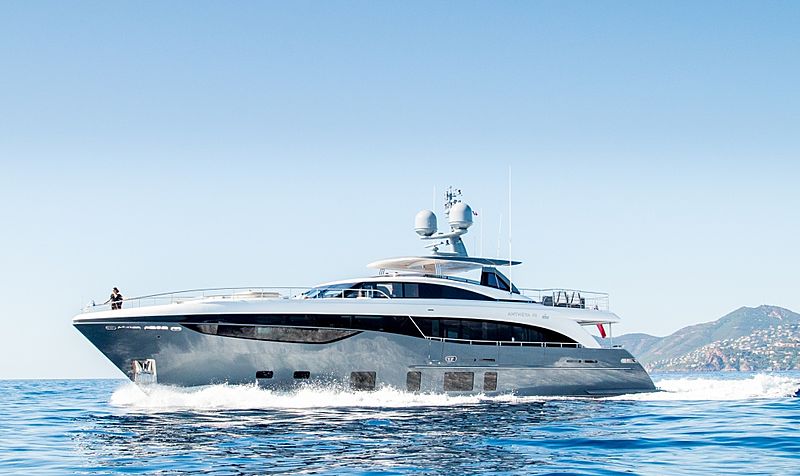 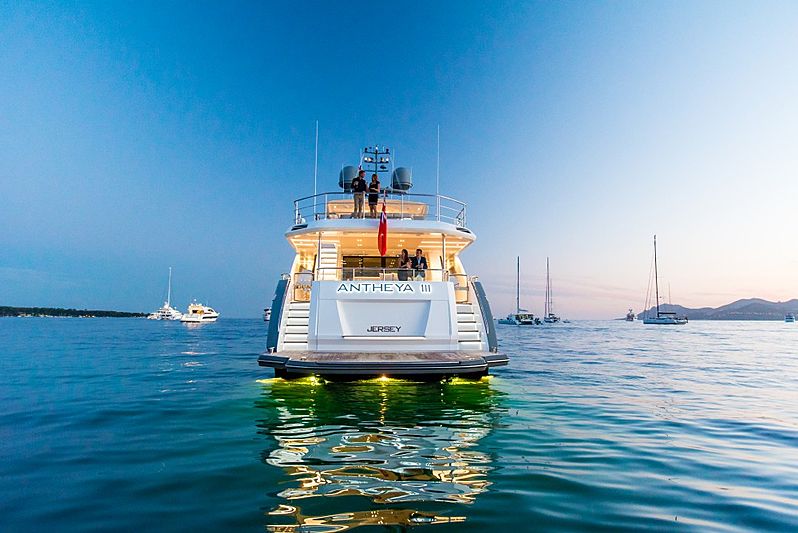 Although based on the same concept that is behind the 40M, the 35M comes as a completely individual package with her own set of customisable features and guest spaces. Antheya III is dressed in a distinctive grey hull that gives one just a glimpse of her elegant yet sporty nature long before you step on board. 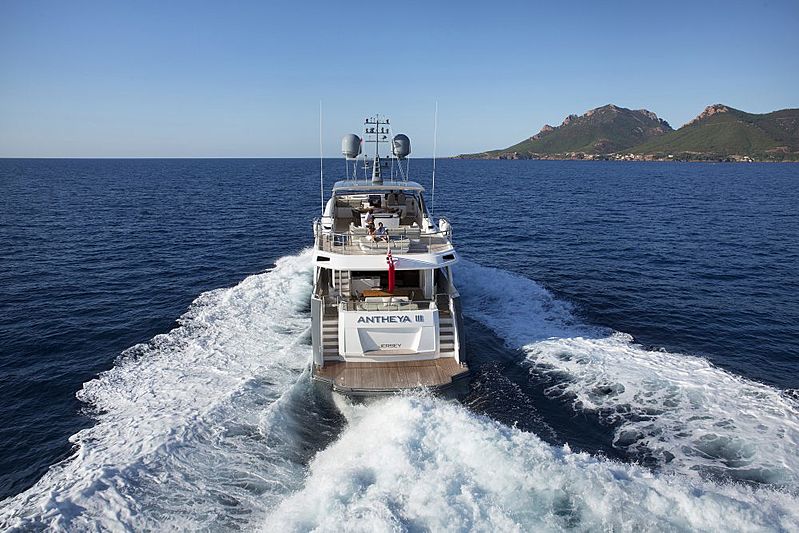 Princess once again teamed up with British designer designer Bernard Olesinski to create a clean and flowing exterior with dynamic elements suggesting that Antheya III is not only designed to spend time at anchor off St. Tropez, but also to get there in style and speed. 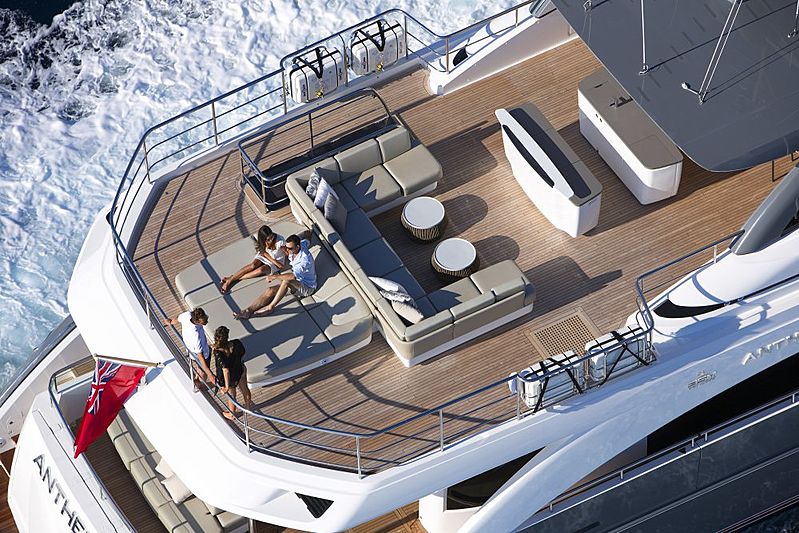 The sundeck has been kept simple, and save for the sociable U-shaped lounge and circular dining area, separated by a stylish bar and service area, this deck is left open to move about freely or to be used as the ultimate entertaining area. A flybridge helm and forward facing guest seating is located forward on a raised platform for increased visibility. From here one easily move down to the raised pilot house below through a central companionway. 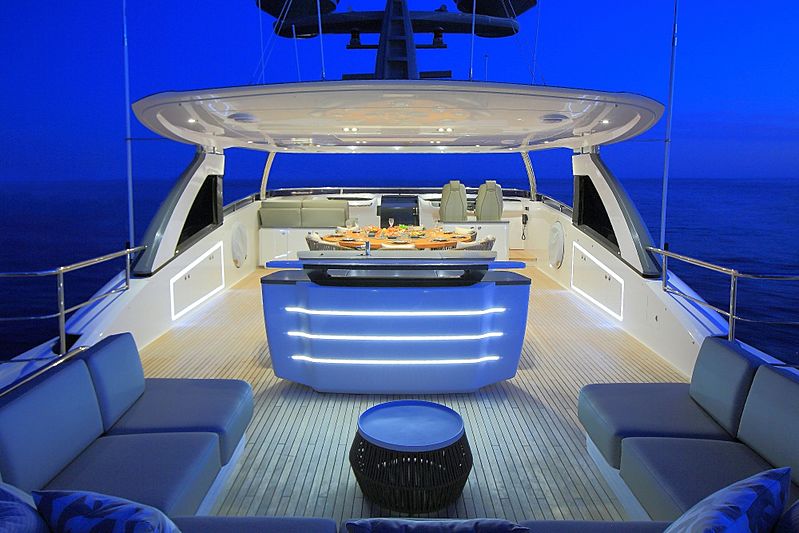 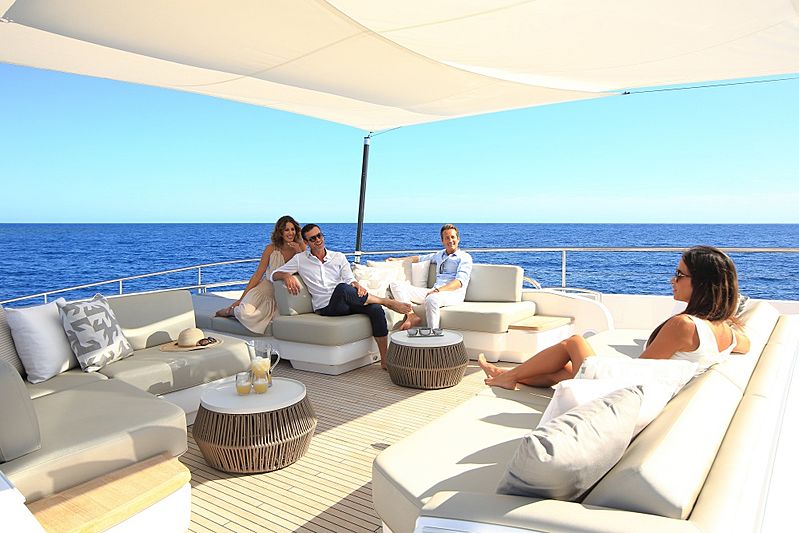 As just one of the many options available to clients, the 35M comes with a choice of propulsion sets, with top speeds ranging between 23 and 27 knots with each offering a range of around 1,700nm at efficient speed. The MCA LY3 classed yacht stretches 7.3 metres across and draws a mere 2.11 metres, for a total Gross Tonnage of 248 GT. 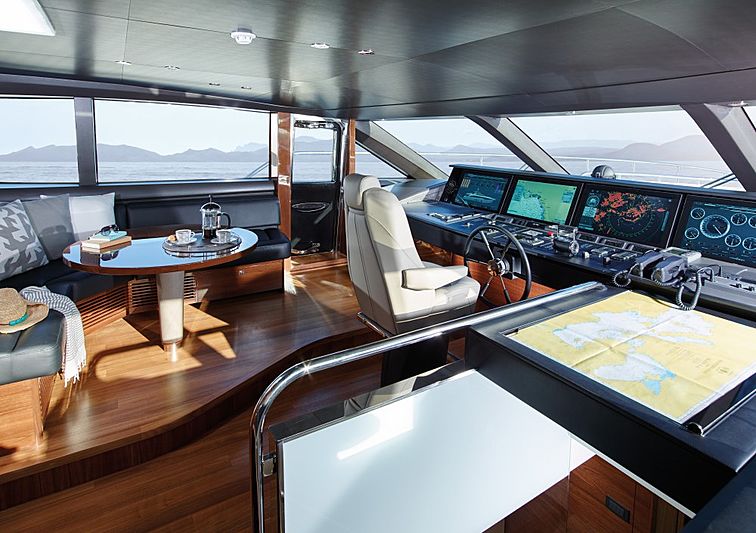 A few steps down, one lands in the foyer on main deck. Moving forward from here is the tasteful full beam master suite. The stateroom is decorated in a mixture of light and darker textured woods and panelling. But it’s the abundance of natural light and simple feeling of free space that could well be this area’s most notable attribute. The large side windows, functional layout and excess of generous storage spaces all adds to the unrestricted ambience so apparent here. 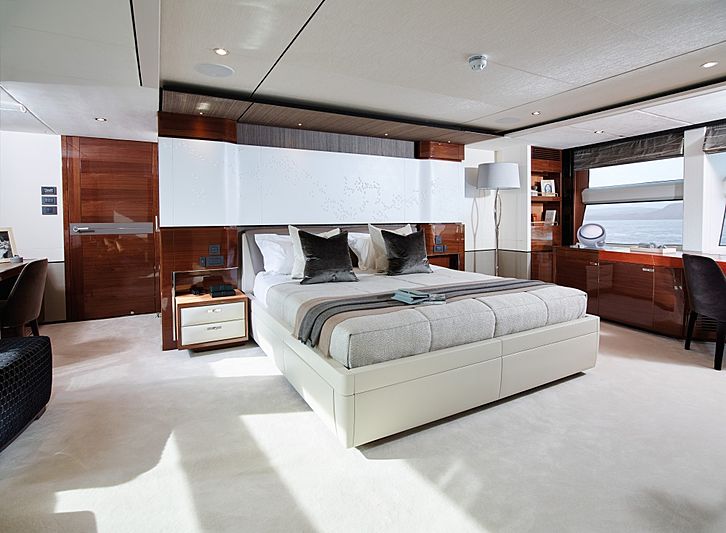 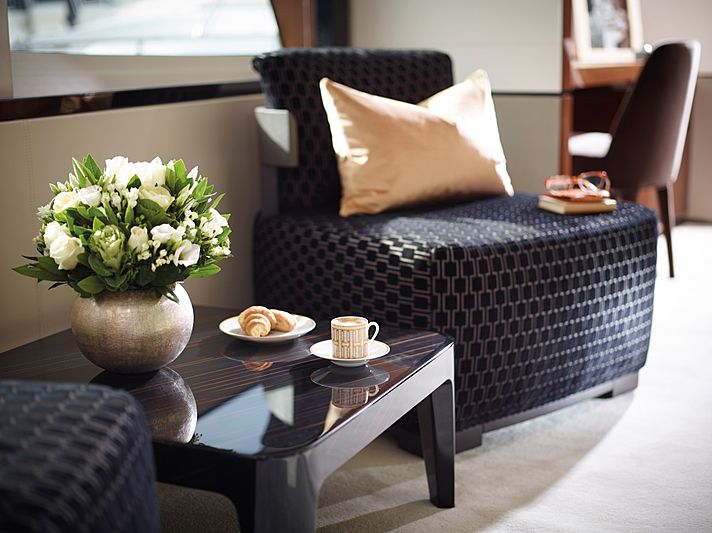 The en suite bathroom forward is just as spacious if not even brighter thanks to the continued life size windows on either side. 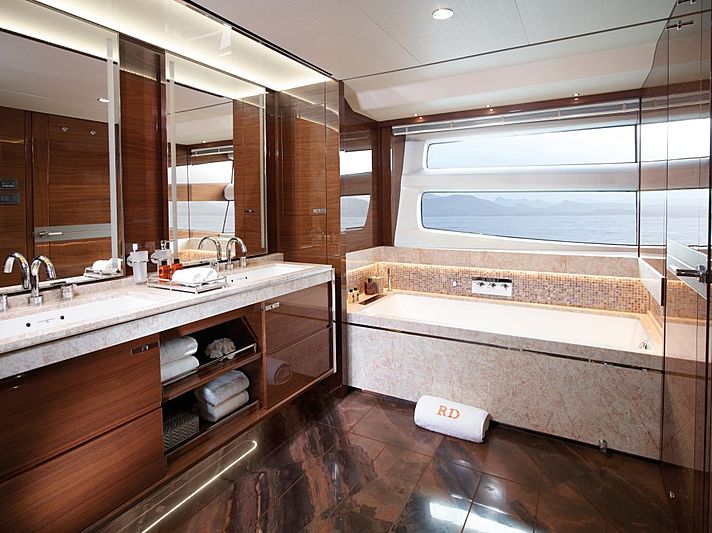 As the first point of entry for many guests, the salon on main deck certainly doesn’t disappoint. The first thing one notices are the full height side windows that blurs the lines between indoor and outdoor spaces. The fold down balcony, rich white leather upholstery, clever LED lighting and reflective surfaces together make this one of the most pleasant social areas on board. 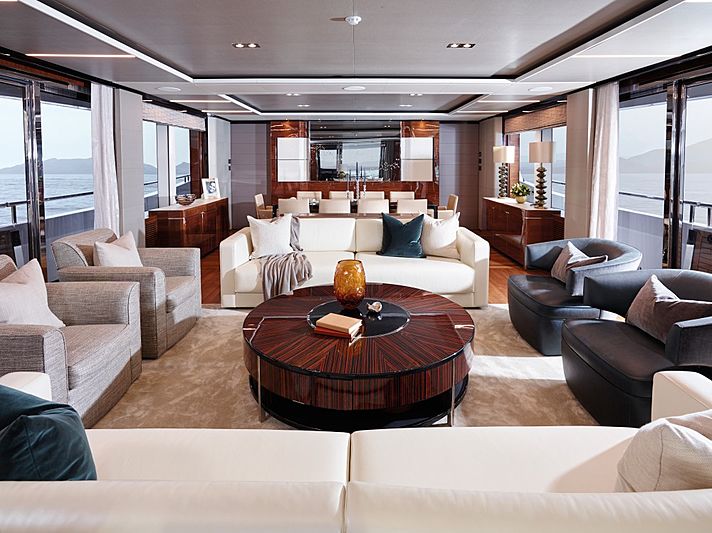 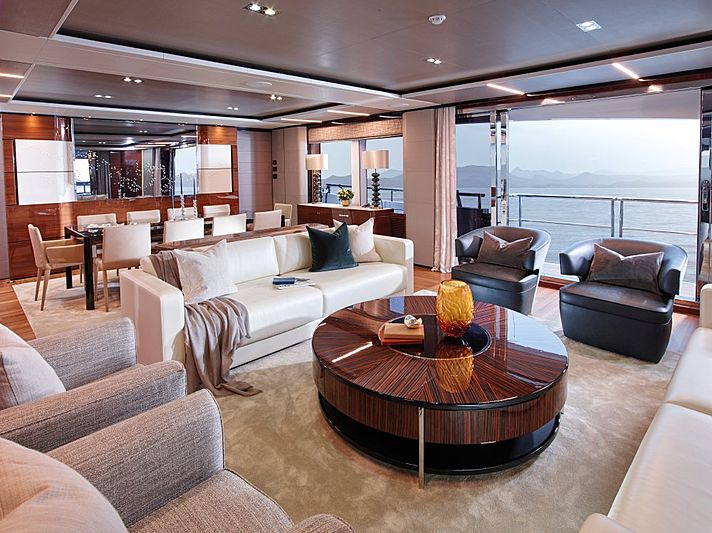 A large formal dining table forward of the lounge offers the perfect excuse to dress up and enjoy a dining experience with friends and family. 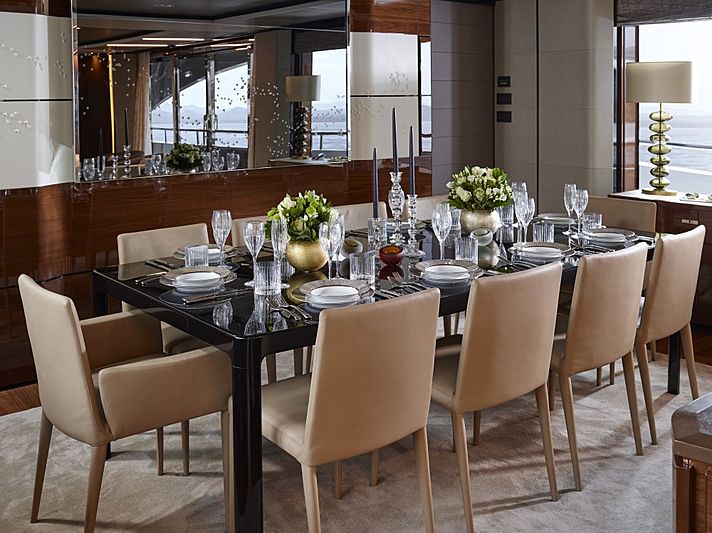 Further accommodation below consists of four guest staterooms; two twin and two double cabins. Princess has ditched the conventional use of this space completely however and on Antheya III, fitted a second full beam VIP suite here on the lower deck, now only with space for six guests below. The bunks in the two twin cabins forward can be merged to reveal two offset double beds. 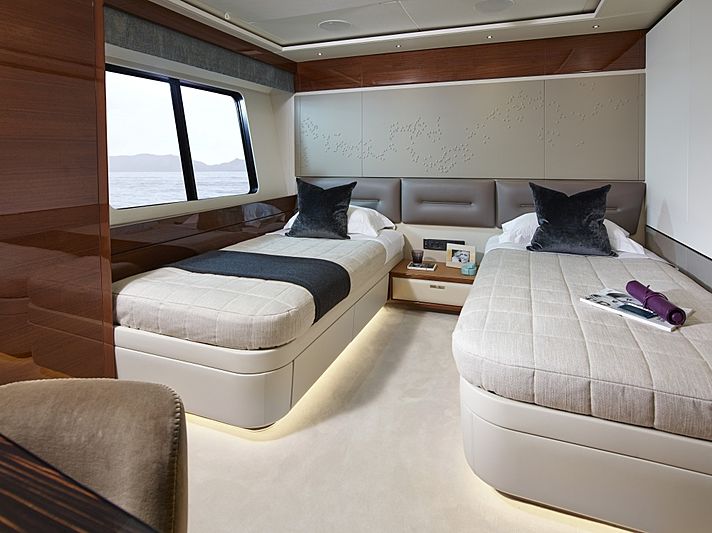 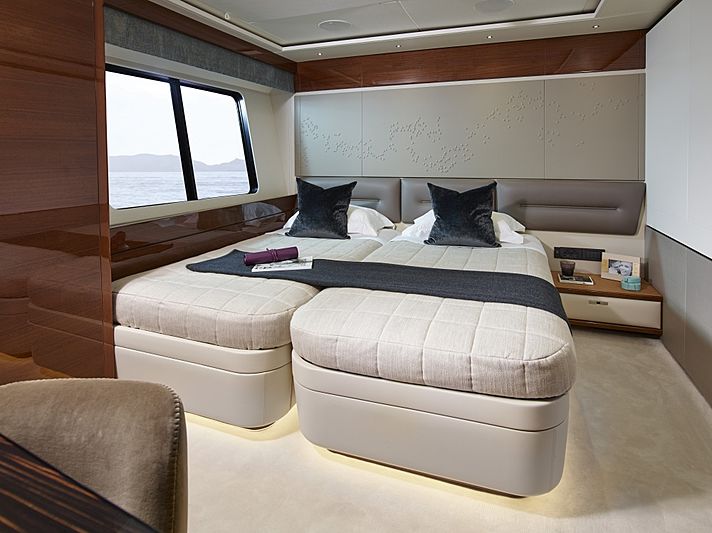 Another option is having two double cabins separated by a retractable bulkhead which means this area can either be two separate cabins, or, serve as one large apartment-style space ideal for children spending the holidays on board together. 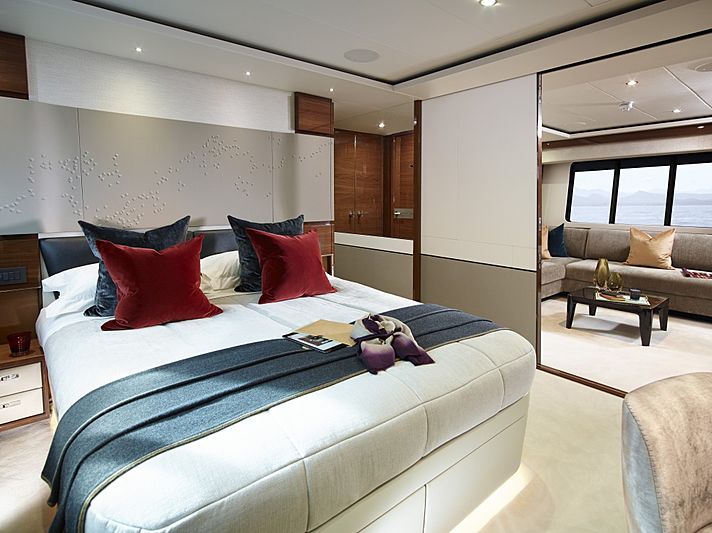 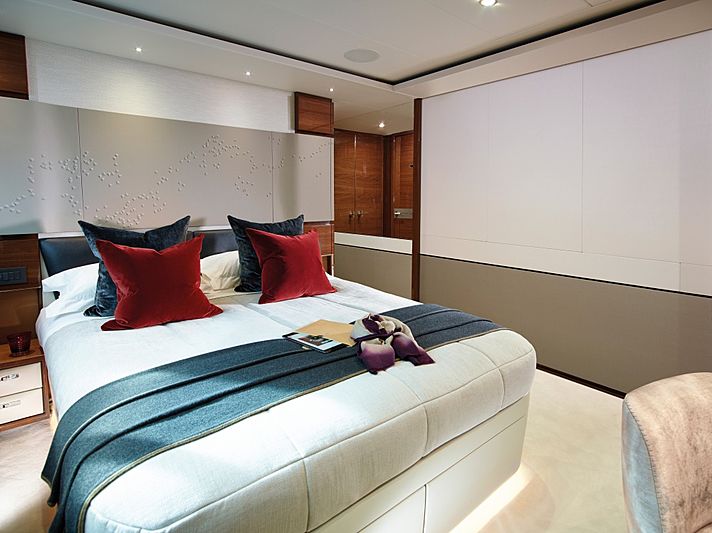 As part of the philosophy to utilise every possible space on board, generous social and sun bathing area has been created on the Portuguese deck in front of the bridge. This area is perfect to unwind during a calming sunset cruise, or simply escape the busier guest areas to enjoy some sunbathing in private. 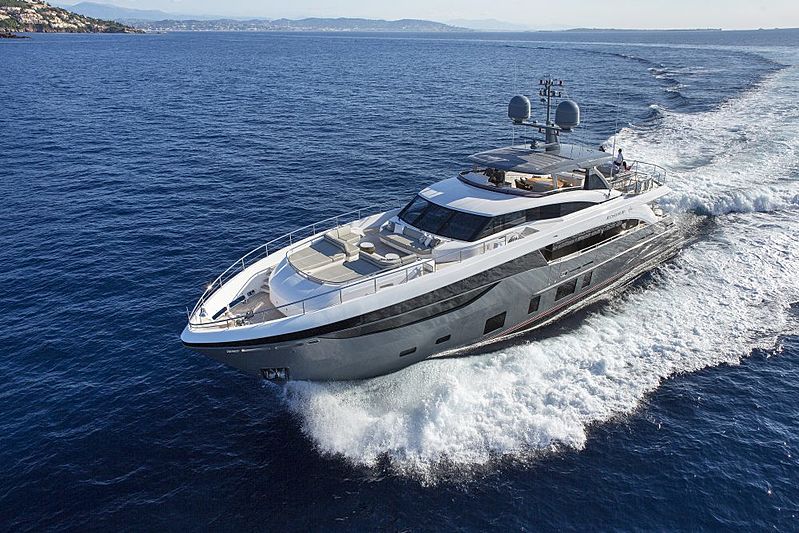