Recently completed in Istanbul, the 49.90 metre superyacht Dusur is the latest offering from the Turkish shipyard Bilgin Yachts. Designed for a Saudi businessman who the team at the Bilgin yard state was very much involved in her design throughout the whole process, the displacement motor yacht boasts a high volume of 795 GRT, particularly in comparison to other yachts in this size range. 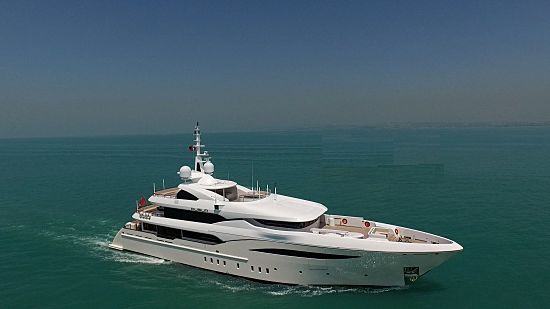 The vastness of her notable interior volume is immediately recognisable from the moment you step foot into the lounge and sophisticated dining area located on the main deck. Seating up to eight guests in comfortable armchairs around a unique dining table, this space exudes opulence and sophistication with a rich, dark colour scheme. Also in this area is a cosy bar area and small seating space, complete with four cream deep armchairs situated around a high but small table. 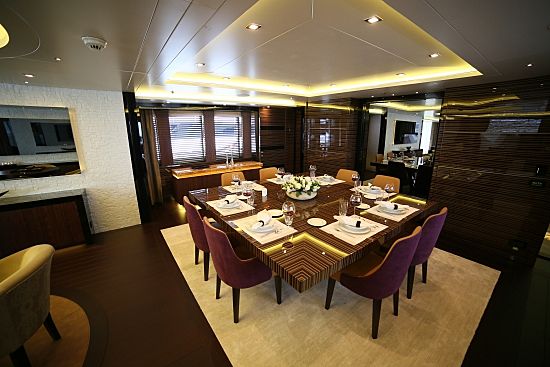 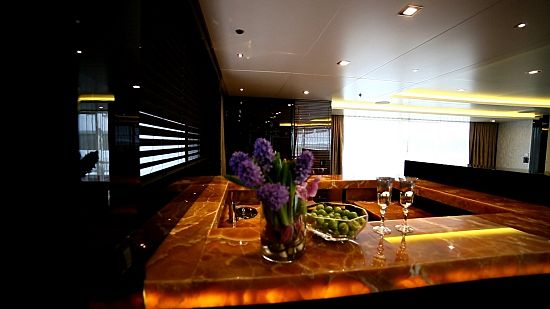 Walking further into the salon, the living space has been conceived as a light and airy environment perfect for both socialising and relaxing with two large, plush sofas in a rich black cherry shade and two stately armchairs surrounding a low coffee table and large television. The highlight of the lounge is arguably the three metre sliding doors at either side of the room, enabling a sense of indoor/outdoor living, as well as flooding the area with natural light and providing spectacular views. 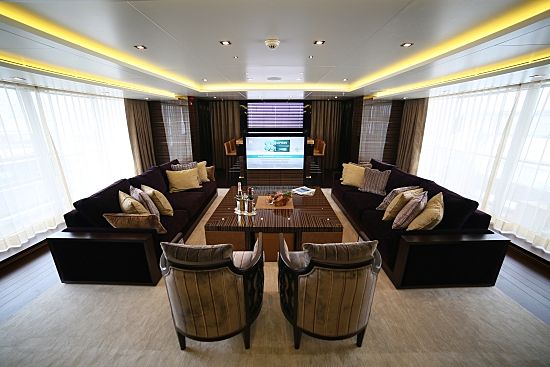 All of the sound and visual systems, lighting and blinding systems as well as all of the mechanisms that form part of Dusur’s living area can be easily controlled by iPads and iPhones at the owner and his guests convenience. This is made possible through the SAVANT automation system, which includes special software created exclusively for Dusur. Another conspicuous feature on board is that, with the exception of two crew doors, all of the doors on the vessel are both electric switch and optical. 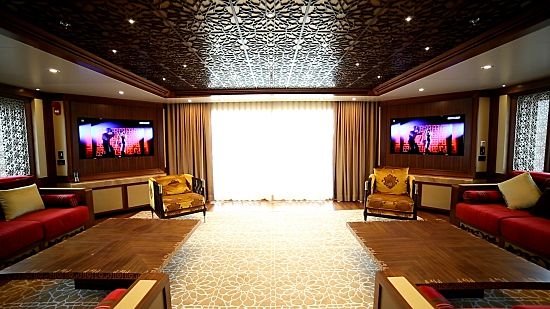 In regards to her accommodation, she comfortably sleeps up to 12 guests over five large cabins. The four guest cabins are all located on the lower deck, two of which come with a folded cot conveniently placed inside. All of the guest cabins are decorated to the same high level opulent styling as is found throughout the rest of Dusur’s interiors, and come with amenities such as large flat screen televisions and spectacular en-suite facilities. Crew accommodation is also found on the lower deck, consisting of six cabins as well as two separate living areas and a large laundry area. 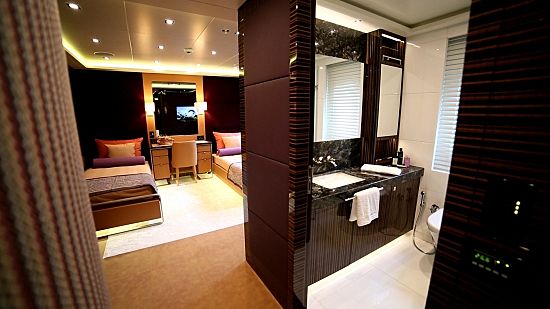 The expansive owner’s suite was a part of the vessel in which Bilgin note that the owner himself was specially involved in, and is certainly one of the stand out features of the whole of Dusur. Located forward on the main deck, the generous area comes with a private TV room with a large L shaped sofa and chocolate brown armchair, ensuring that the owner has ample space to enjoy ultimate privacy. In addition, the owner’s cabin also features a king size bed, an exclusive balcony which leads out to starboard, as well as a large, luxurious bathroom complete with a jacuzzi bath. All of the bathroom fittings were selected by her owner at the Samuel Heath Personal Mega Yacht Design division. 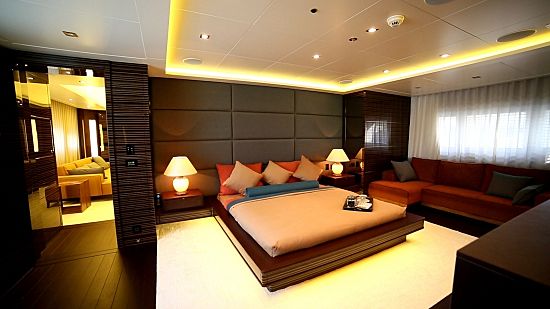 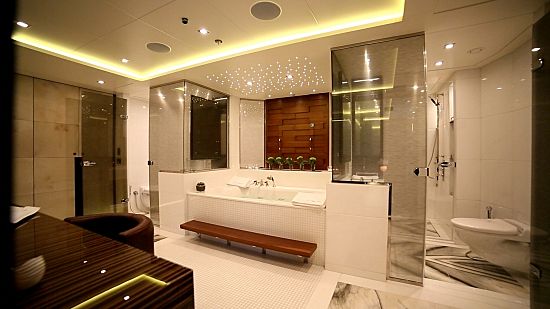 Amongst her other amenities on board in addition to her bar and lounge areas, is a state of the art gym located on the upper deck, as well as a film theatre, and Turkish bath. Dusur also comes with ample tenders and toys to fully make the most of life on board, including two boats and two jet skis. 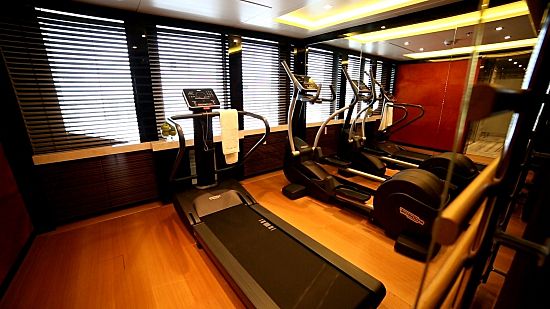 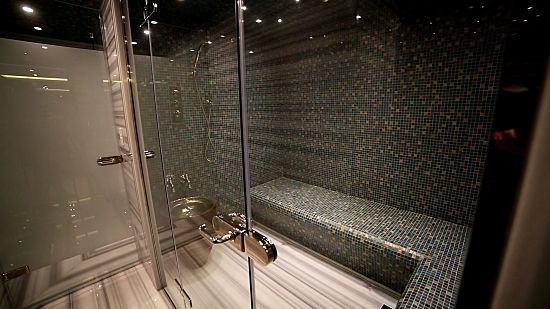 Moving on to her exteriors which were designed by the British studio H2 Yacht Design - a regular collaborator with Bilgin Yachts - one of her most appealing features is the large beach club located on the lower deck. With big shutters that open to both the back as well as the right side of the boat, there is more than enough space for all guests to relax and enjoy the best of oceanside socialisation and expansive views both day and night. 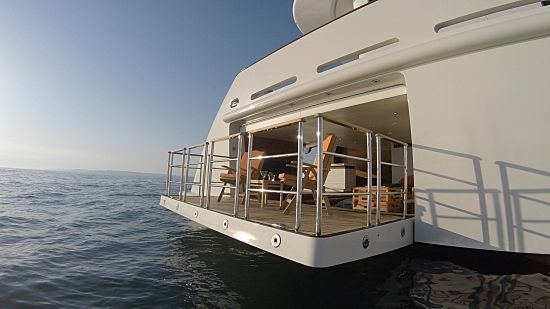 Her sun deck boasts further generous spaces to enjoy, with two large seating areas in cream, with dashes of colour added with pillows in a range of blues - one of which faces the sophisticated bar, and enjoys shaded protection from the sun, with two small tables situated just in front. To the fore a large BBQ a Jacuzzi with a LED lighted mosaic base, a rest room and a shower is found. The RGB of the Jacuzzi is partly window based so that even the main deck gets the day light. 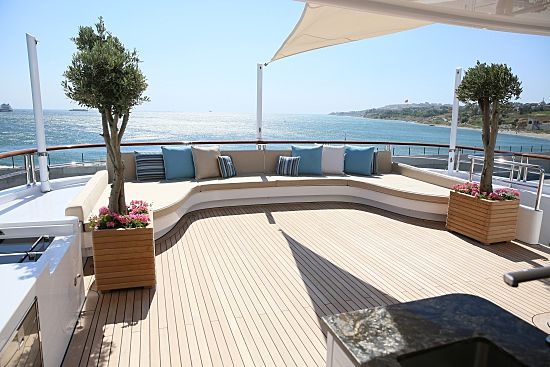 The upper deck aft provides yet another capacious social and living space, and is home to a large, shaded dining area that comfortably seats up to ten. With uninterrupted views all around as well as an additional bar, the perfect setting to enjoy the very best of al fresco dining has been created, complete with additional seating areas in the open to enjoy the sun, and a 48” TV with satellite and entertainment system connections. 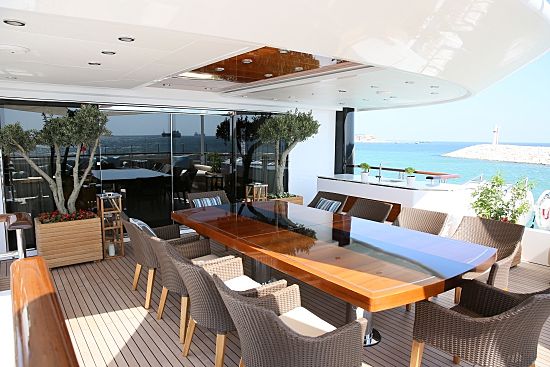 In terms of her performance, she is powered by twin Caterpillar 3512C engines of 1,650 hp each, providing her with a maximum speed of 16 knots, and a cruising speed of 13 knots. 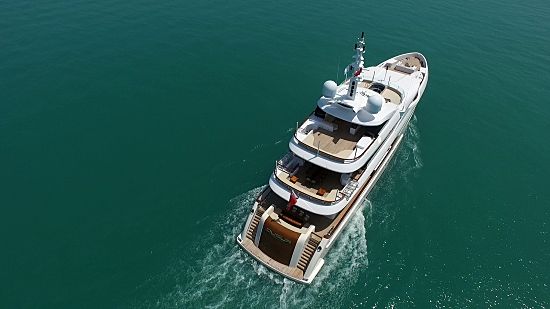 Visit Bilgin Yachts at this year's Monaco yacht Show in September to view Dusur for yourself, and find out more about more about this market-changing superyacht.