Home > News > Superyacht of the week: The refit of My Seanna

How does one go about creating the perfect charter yacht? Commission a new-build at a world leading shipyard? Further develop an already successful charter yacht perhaps? The solution to this request by the owner of the ex 48m Newvida came in the form of a 7.6 meter extension and a series of well executed enhancements to his yacht, transforming the current My Seanna into a guest-pleasing oasis 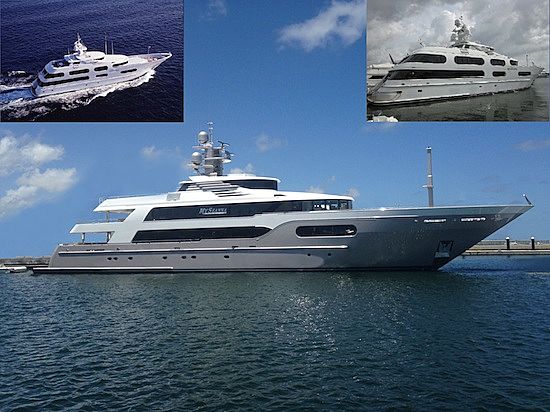 It was the work of the owner’s representative, Joseph Leone, to establish what changes the yacht would ultimately undergo. Leone set out to uncover essential features that all successful charter yachts are able to offer their guests today, and incorporated these in a single profile. After meeting with naval architect Patrick Dupuis of Murray & Associates, these ideas came to life in sketches and technical drawings which would eventually steer the 17-month transformation project. 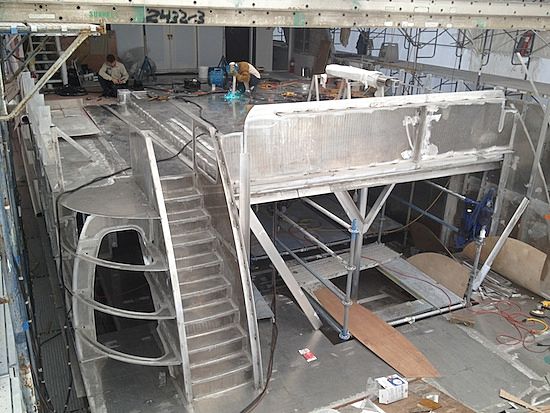 The well established Rybovich Shipyard in Florida was tasked with the completion of these advanced cosmetic and structural changes to the vessel. “The brief was very clear,” explains Francois van Well, Vice- President of Business Development at the yard and a key role-player in the success of the project; an extension to all aft-facing decks had to be completed with a beach club added to the newly extended stern area. The extended sundeck will have to house a touch-and-go helipad, and a new silver metallic paint job for the hull and mast. 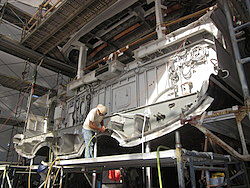 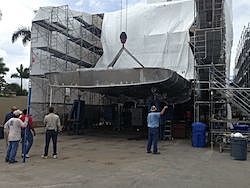 Following the removal of the existing transom area, focus shifted to the construction and assembly of the brand new beach club. The yard succeeded in creating from scratch a space that now houses a 19ft tender and two jet skis. These are launched through an upward opening garage door using the overhead crane, and reveal an ideal guest area where free standing wooden furniture and contemporary black and white panelling sets the scene for a relaxing day at anchor. Good storage for watersport toys and diving gear can be found on the starboard side with a day head and drinks-fridge to port. Guests are led directly up to the aft main deck through a set of stairs on the port side. 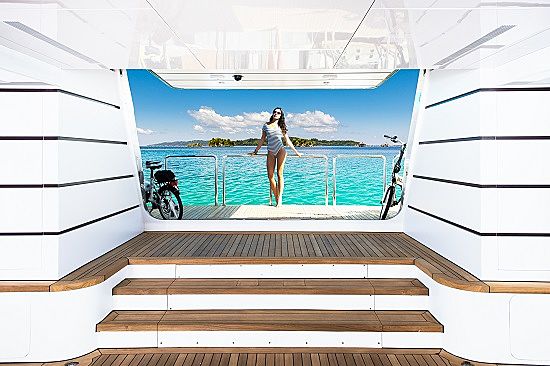 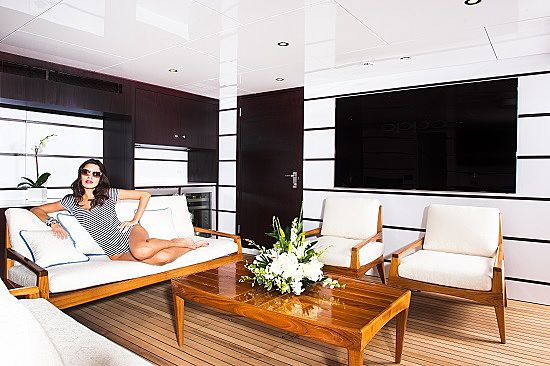 The main deck aft area which used to be enclosed by glass side panelling has been completely opened and the space is now one of the main outdoor meeting areas. The 16ft extension to this deck has enabled the designers to add a U-shape settee aft, great for both dining and evening cocktail occasions thanks to the adjustable tables. The entire midships area of the deck has been raised to create a centre island, allowing guests to fully appreciate the surrounding views and also lends a sense of purpose and structure to the deck. Additional free-standing furniture make up the remaining seating possibilities and is easily arranged or even removed by the crew to suit any event. 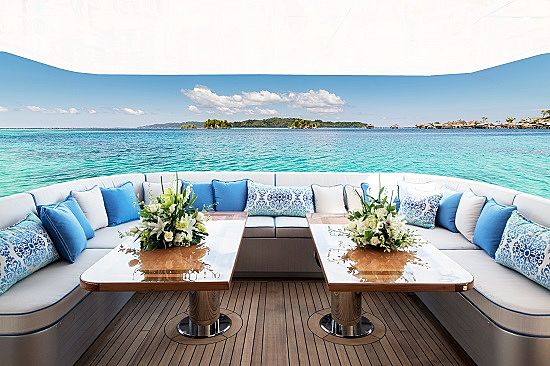 The upper aft deck has also been enhanced by the removal of the darkened side windows. The deck feels extremely airy and open, yet completely private and secluded from the rest of the yacht. A perfect location for dining when in port. The large 10-seater dining table could once be found on the main deck aft, but was moved up here during the rebuild. On either side of the table, back-lit blue marble-top counters have been installed. A buffet cabinet on port side and a full service bar to starboard. This keeps wonderfully with the ocean blue colour scheme of the group of sunbeds. The two individual U-shaped seating areas placed aft adds to the symmetrical design of this deck. 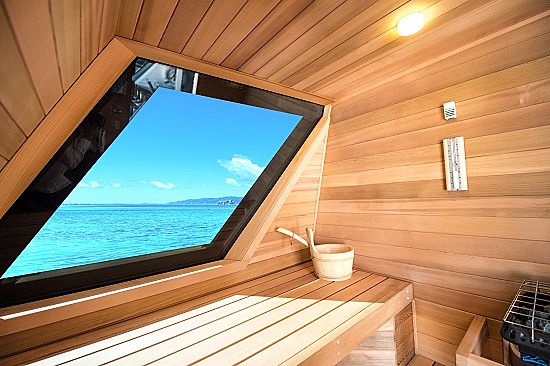 During the original construction, composite materials where used in the building of all decks above the upper deck including the bridge deck superstructure. The yard decided to continue with the use of this material and added another 10 feet to the sundeck aft. To ensure adequate space for the helicopter, the old Jacuzzi was removed and replaced with an oversized custom pool moved forward. 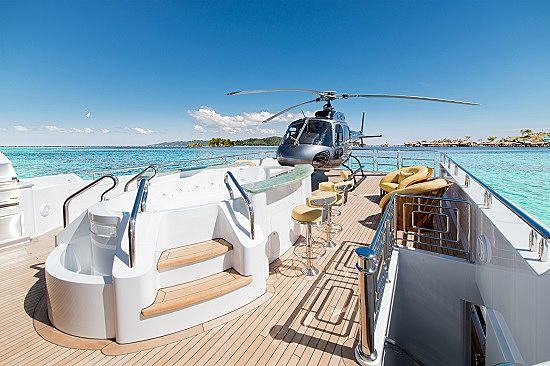 The new pool features two bar tops on either side, suitable for use when in the pool or while enjoying the views from the bar stools on deck. The relaxing sound from the infinity edge waterfall feature is sure to attract guests. It is from here where guests will be able to experience a movie night under the stars made possible by a projector mounted on the deckhead forward of the Jacuzzi and displays an image on a removable screen placed on the very aft section of the deck. 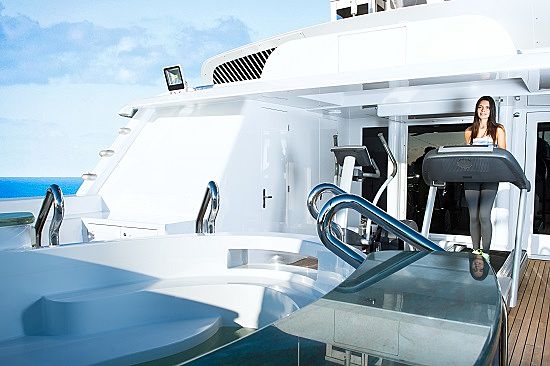 An exercise area with free-standing gym equipment was created beneath the superstructure overhang where guests can stay in shape even while on holiday. A sauna was also added to this wellness corner, and guests will be able to enjoy the views here too through a large window. On the starboard side a large cabinet has been installed which houses a BBQ grill and wine cooler. With the helicopter removed from sundeck aft, this space is quickly transformed into a sunbather’s paradise with movable deck furniture and sunbeds.

The once cramped and single-purposed crow’s nest has been converted into the ultimate chill spot on board. Guests can retire here just before sundown to capture 360 degree views of the stunning surroundings in absolute peace and security. 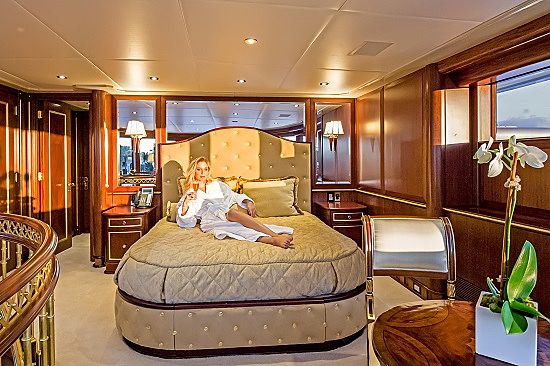 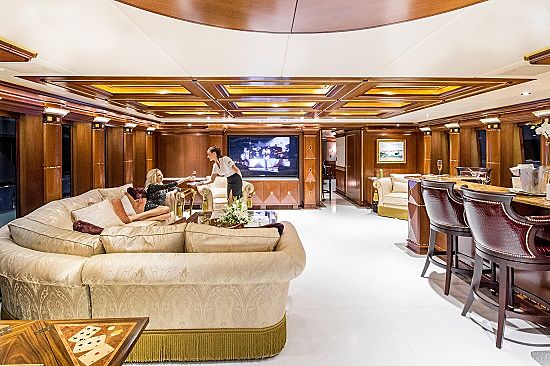 My Seanna’s interior too has received extensive hours of renovations and upgrades. An area which has been completely transformed is the brand new VIP cabin located forward on the sundeck. Here, the view offered by the large forward facing windows has been utilised to create a living area unlike any other onboard. Keeping with the matt finished wooden panelling and gold brushed accents running throughout the entire interior, the VIP is opulently styled with modern touches such as the rising flatscreen TV forward and new Creston AV system. A private staircase leads guests down to the upper salon landing while another exit leads aft from the cabin directly onto the sundeck. 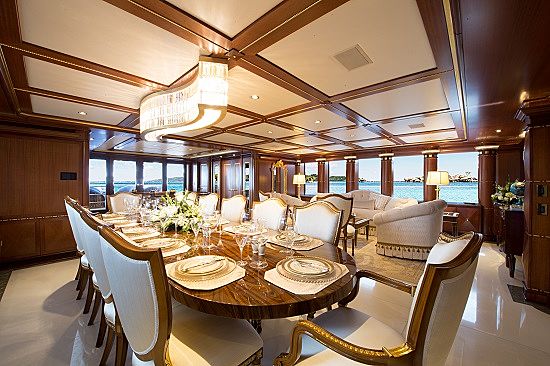 Another innovative modification performed on the interior was the redesigned access from the upper salon to the aft deck outside. Before, a spiral staircase directly forward of this entrance used to limit access between these two spaces to two narrow entrances on either side of the staircase. The decision was made to remove the staircase completely, which enabled the yard to create a large sliding door that now serves as a link between these two interior and exterior living spaces. In addition to this, the upper salon also received a new drinks bar on the starboard side paired with the re-organising of some original furniture to make the area as flowing as possible.

The four guest cabins located on the lower deck each received two portholes. These cabins had to solely rely on electrical lighting for illumination , now they feel bright and indeed more spacious with this much needed addition. 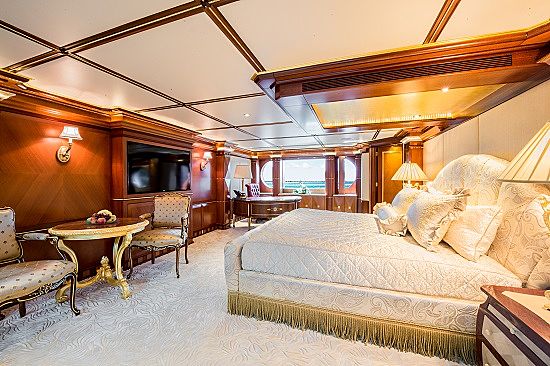 The master cabin has remained largely untouched save for the upgrade in AV systems and electronic amenities. The cabin itself continues the opulent theme onboard and features rich tones of red brown and cream all tied together with the use of brushed gold accents. The suite has a lavishly decorated his and hers bathroom with large oval shaped portholes on either side. 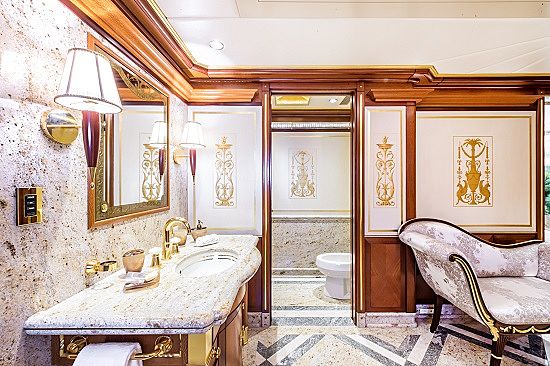 Considerable changes to the vessels handling ability and characteristics can be expected when an extension of this nature is executed. The yard’s technical team did a splendid job with the changes below the waterline to keep My Seanna sailing even better than the vessel once did. Her deeper draft is a direct result of the stern extension, and is due to the angle that the two extended prop shafts follow as they lead aft. Her cruising speed of 12 knots has not been affected by any of the changes and the added 30cm to the bottom of the keel will only improve her sea keeping ability. 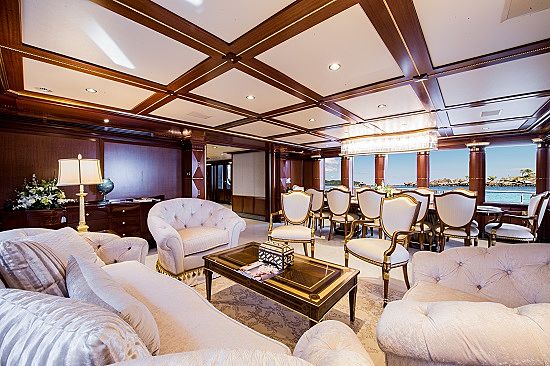 This project is a setting example of the success that follows when good planning, communication between owner and designer and the integrity that an established shipyard provides, all come together. My Seanna is truly a phoenix that has risen from the ashes. This completely transformed yacht offers an impressive amount of amenities to her guests and with her new arsenal of toys and company of experienced crew, she is ready to hit the charter market. 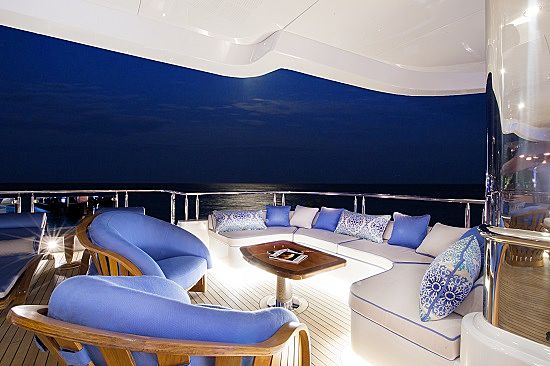 My Seanna is currently available for charter in Caribbean waters through Burgess.