Home > News > Superyacht of the Week: the sleek 101m I Dynasty

When delivered to her owner last year by Kusch Yachts, the 101m I Dynasty became the first yacht in Germany to have been constructed under the new Passenger Yacht Code regulation, allowing her to carry up to 36 passengers. We take you inside this ultra silent and stable world cruiser as one of the largest and most notable yachts launched in 2015. 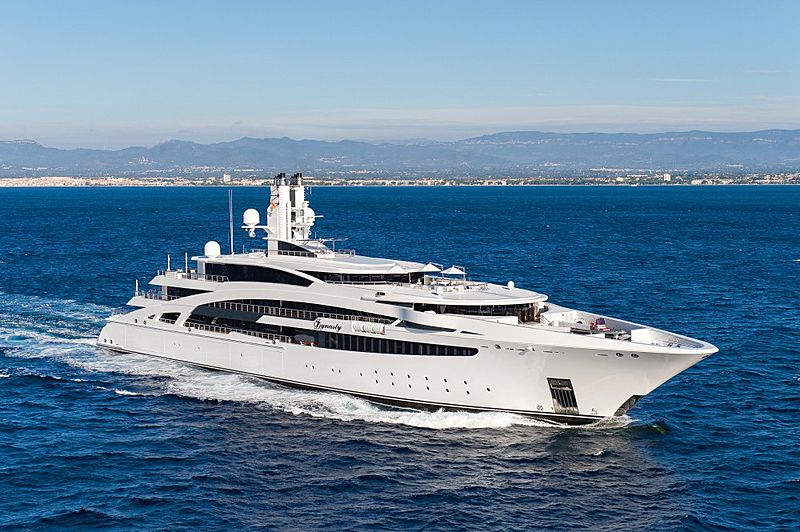 Built by Kusch Yachts,I Dynasty features a subtle yet engaging and powerful exterior drawn by The A Group. Her dynamic appearance justly gives one the impression that underneath this vessel lies a field of technological advancements that truly affords I Dynasty the term superyacht. Her luxurious interior is a modern take on a classical theme, beautifully captured by the team of Studio Massari. 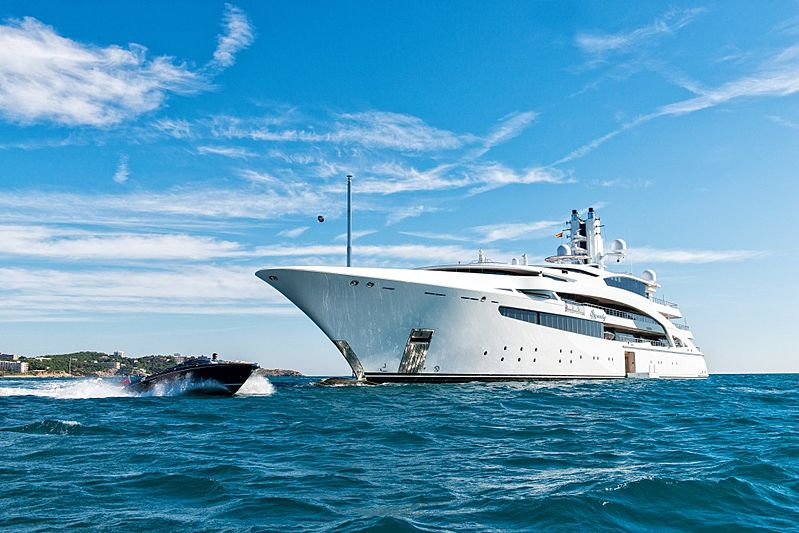 Working together with Kusch Yachts and both design parties, owner’s representative Richard Hein of Vega Yachts was tasked with creating engineering solutions that would drive the use of diesel power, and subsequently harmful exhaust gasses, to an absolute minimum. The project team opted for a diesel electric propulsion package supplied by Rolls Royce. The power output of the on board plant is dependant on the electric load on board, thereby limiting any unnecessary fuel usage and emissions. 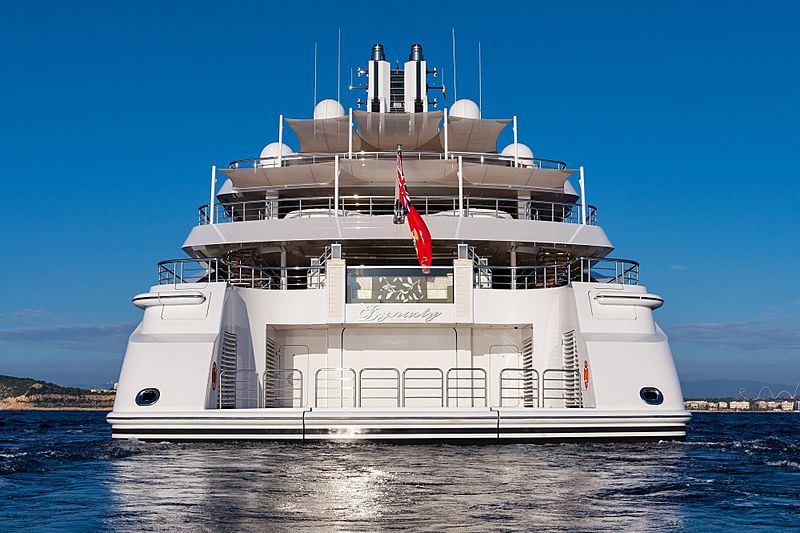 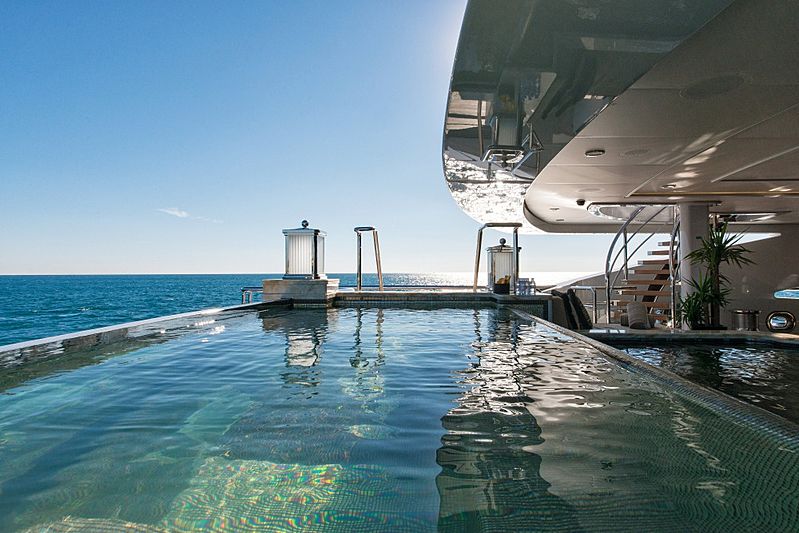 Coupled to this power plant is a pair Rolls Royce Azipull propulsion units. These two electrically driven pods are able to rotate 360 degrees, each of which is frequency driven to minimise vibration and noise throughout the entire vessel while pushing her to reach a top speed of 17 knots. Together with a transverse bow thruster, these units allow I Dynasty to remain motionless in a single position with Dynamic Positioning mode activated. This function becomes particularly useful while spending time in environmentally fragile areas during her intended world travels. 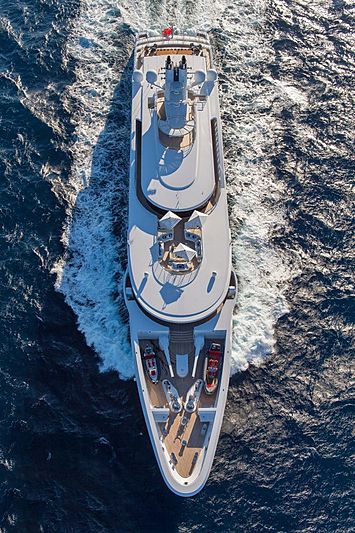 Apart from having to be efficient and as friendly towards the environment as possible, another request from the owner was being able to comfortably accommodate his friends and extended family – a demand that pushed the yacht’s layout far beyond the limits of the LY3 code. To address this problem, the project embraced the (then) new PYC code to safely facilitate the owner’s needs, and drafted Studio Massari to decorate and style the interior inspired by the owner’s culture. 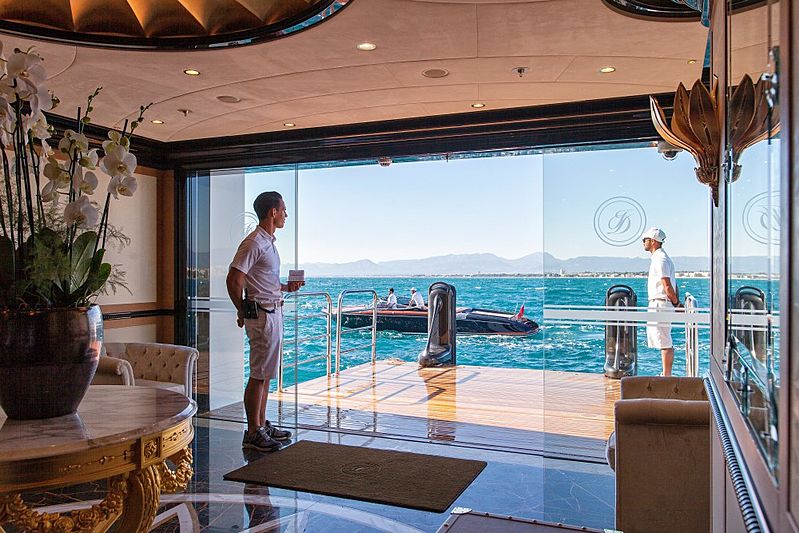 As the yacht would be used by the entire family, functionality was a top priority during the design phase. Creating a timeless and tasteful environment that would be found appealing by different generations while standing the test of time was another challenge faced by the Italian studio. The team used a combination of warm-coloured pallets and soothing sequenced fabrics and surfaces. 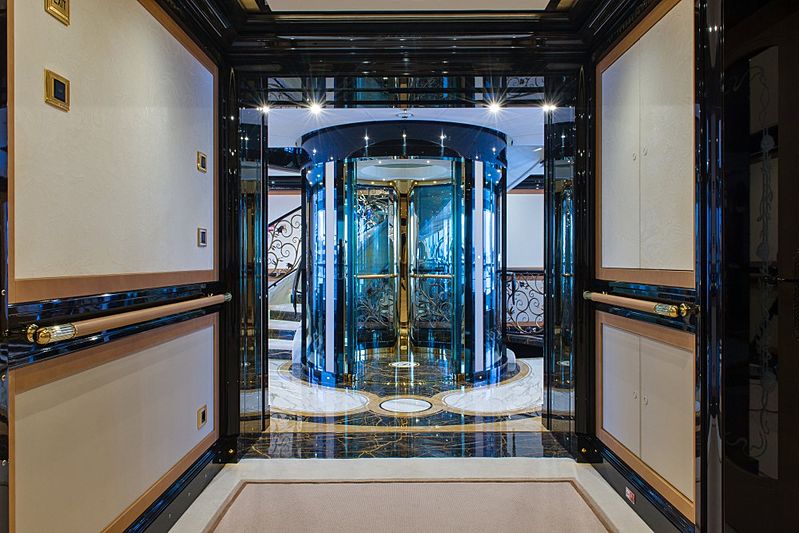 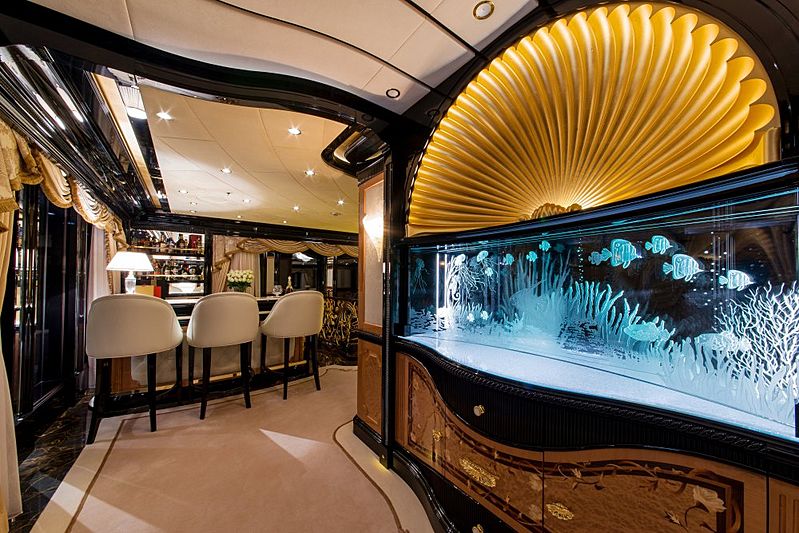 Floors laid with precious marbles and naturally scoured woods emphasises the classical central theme of the entire interior, with innovative uses of lighting throughout adding a subtle contemporary touch. 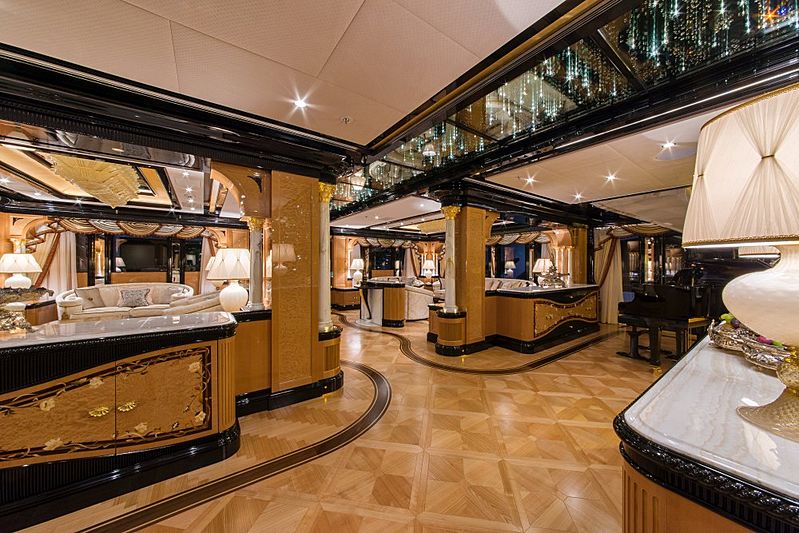 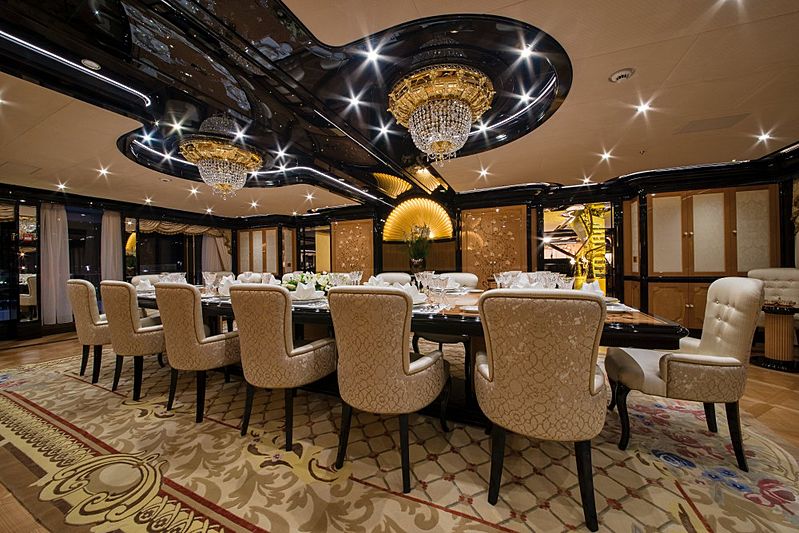 Back on deck, the use of glass is a prominent feature with floor to ceiling windows from the main deck to the upper deck and a master piece on the Sun deck. These aptly named ‘shark fins’ has become a signature of The A Group design. From the sun deck down to main deck, The A Group worked closely with Studio Massari to design exterior areas that are comfortably protected, thanks to numerous hidden glass doors and windows. 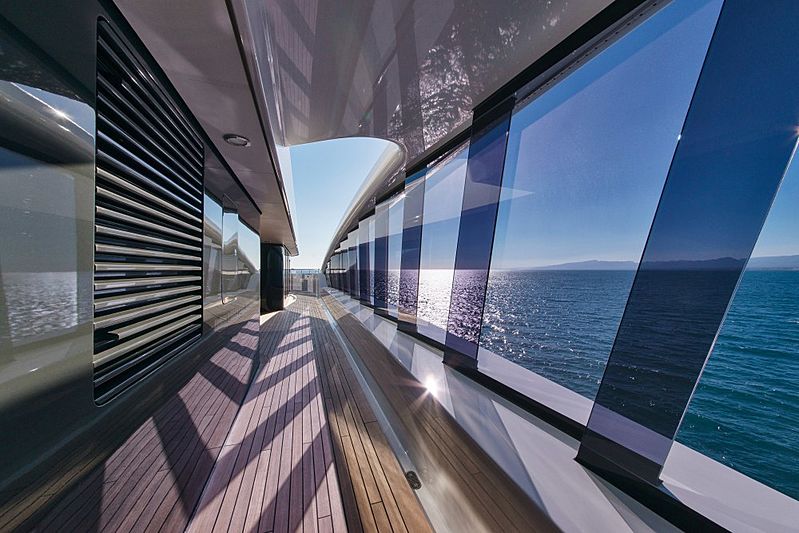 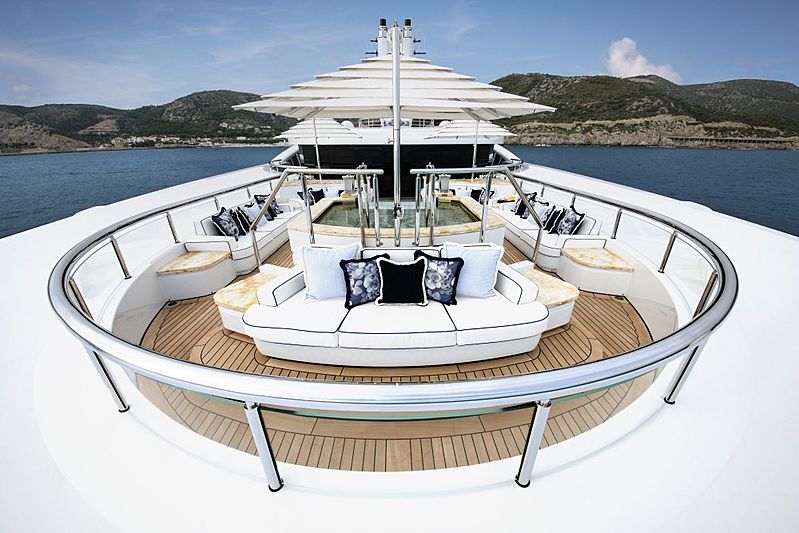 Another unique exterior area is the aft tender dock. This space is designed to house a 10 metre tender spanning 3 metres across. Once launched, the empty space is converted into a sea water swimming pool. Huge garage doors measuring 12.5 metres on either side of the stern area at water level opens up to reveal I Dynasty’s remaining fleet of tenders. 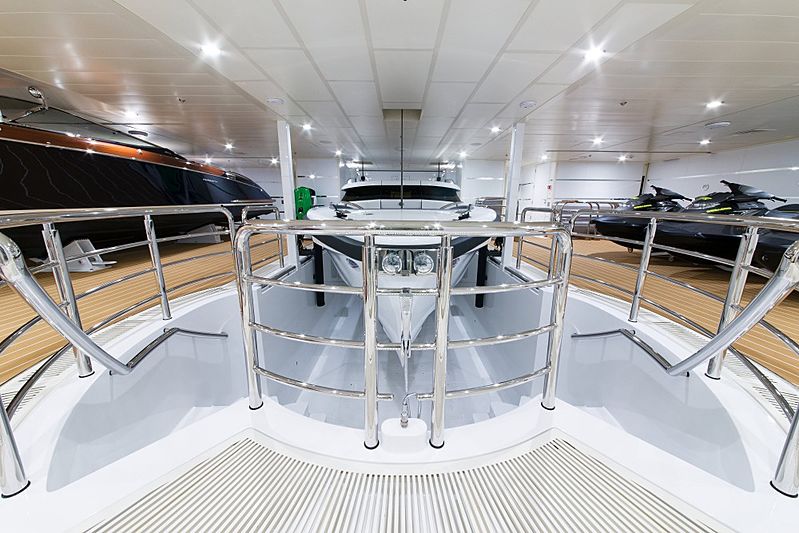 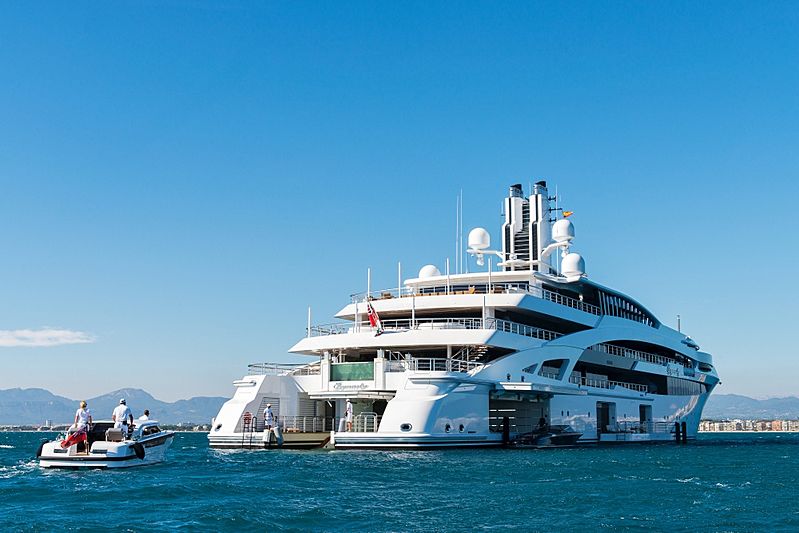