The world of fully-custom 30-metre motor yachts is a small one and we only see a handful of these projects each year that can rightfully be described as a ‘one-off’. On the back of its successful 60-metre motor yacht Samurai that was completed in 2016, Turkish shipyard Alia Yachts decided to apply the same bespoke philosophy to its latest project. The 31-metre Virgen del Mar VI has quickly become one of our favourite yachts of the year in this entry-level size range and here we will show you why. 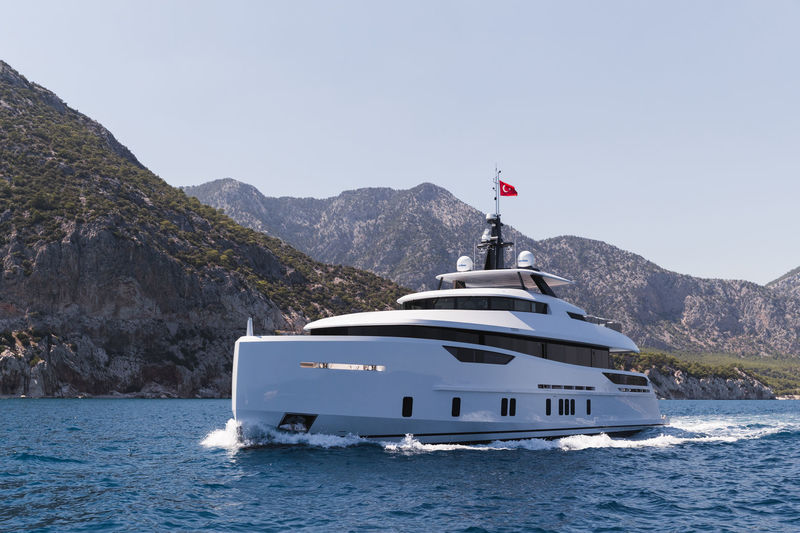 “There are plenty of 30-metre yachts out there, but most are production boats and none of them offer quite the same volume and degree of customisation or bespoke design features,” says Alia President, Gökhan Çelik. At 235 gross tonnes, Virgen del Mar VI is no small yacht. Despite her sleek profile, it is that beam of 7.4 metres that provides the bulk of the interior space as well as limited deck space on the main deck and an overall clever layout. 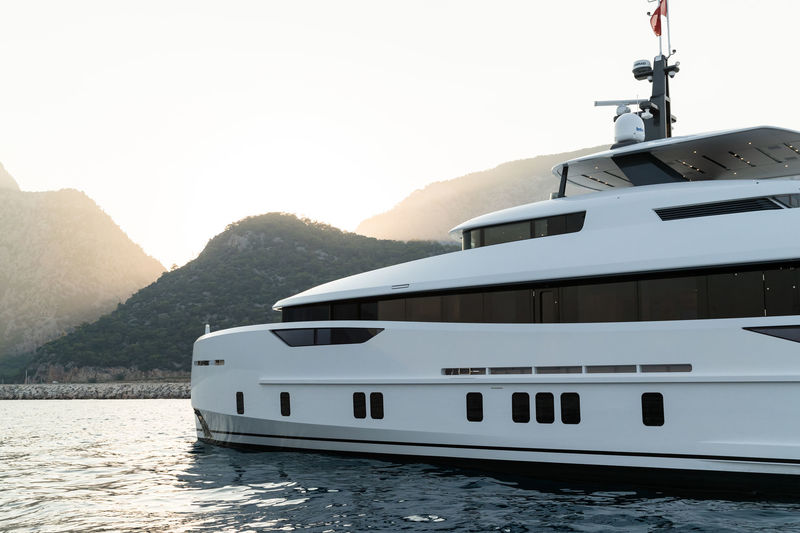 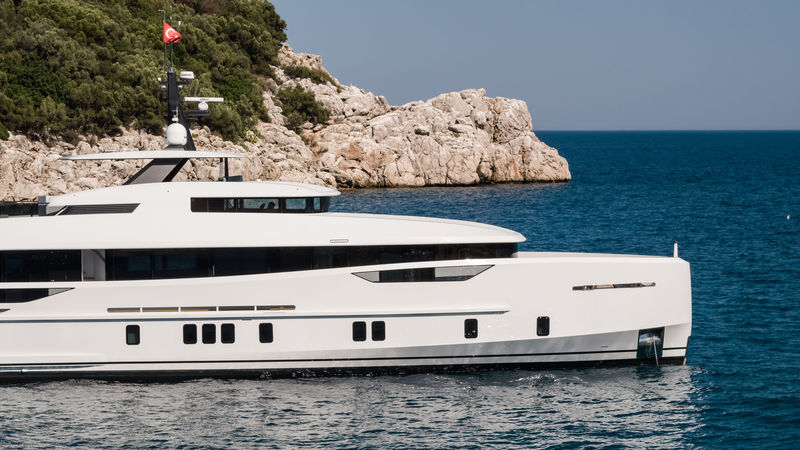 For this project, the same design team that was behind the development of Samurai was summoned to continue the familiar look that Alia’s flagship has brought to the market. With Omega Architects in charge of the exterior design and British studio RWD taking the lead on the inside of the yacht, Project Nozomi (as she was known during the build) was in good hands right from the start. Local Turkish office, Unique Yacht Design also contributed to the project as naval architects. So successful was the development of the yacht’s design that Alia Yachts have now started construction on an identical second hull, turning what once was a one-off project into an exclusive semi-production series; a first for the shipyard. 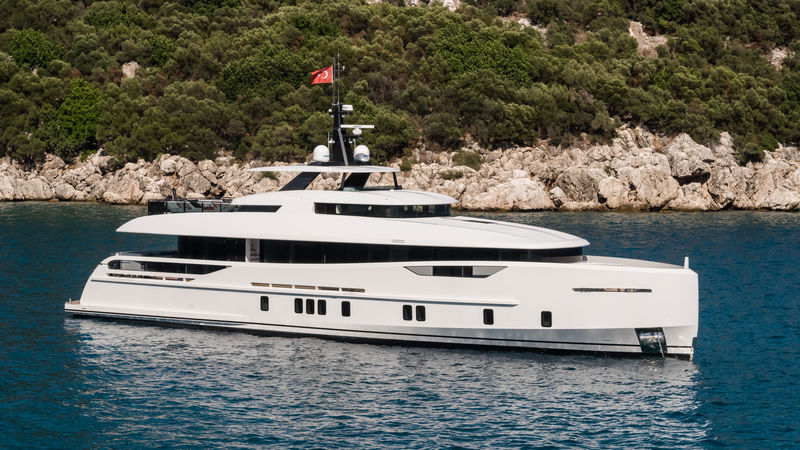 Virgen del Mar VI’s owners not only wanted a spacious yacht, but one that they could take on longer voyages and spend more time on at anchor. Comfort and cruising go hand in hand and Omega Architects achieved a stable ride by making the hull shape as efficient as possible. “Our signature style with sleek, flowing lines can be recognised in the yacht’s softly angled overhangs aft and forward, providing elegance as well as functionality,” says Omega Principal, Frank Laupman. “We also optimised the waterline length with a plumb bow and a narrow entry for more efficiency at higher displacement speeds for an impressive cruising range of 4,500 nm.” 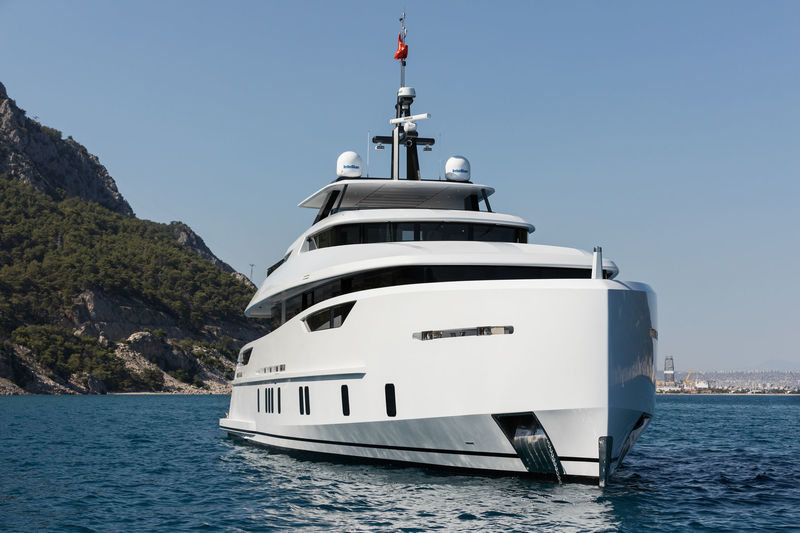 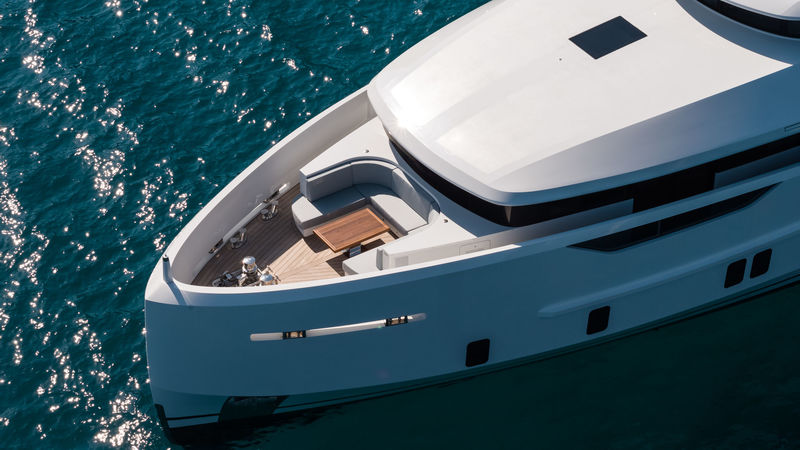 Deck spaces are simple and highly functional with most outdoor features concentrated on the flybridge. Apart from serving as an outdoor navigation deck, the flybridge features a conventional informal dining area to port with a massive built-in sunbathing lounge toward the stern that is on a sunken level relative to the rest of the deck for added privacy. 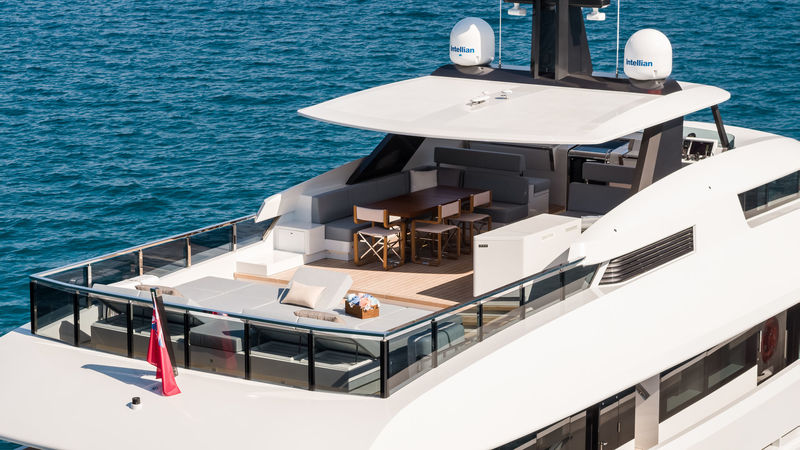 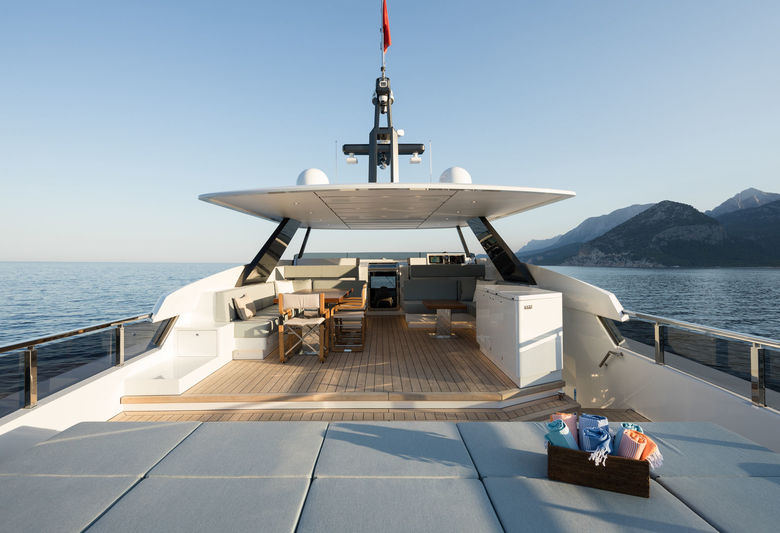 The clean lines of the exterior profile are continued in all deck areas with few obstructive elements in the design. 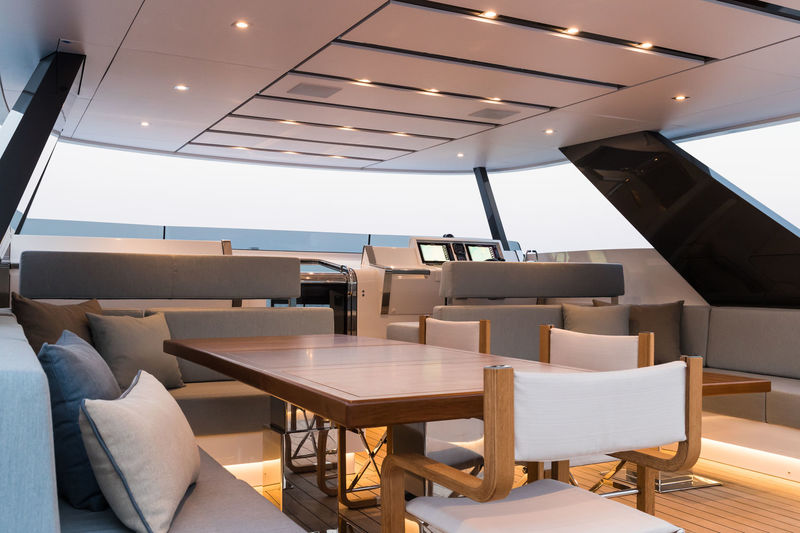 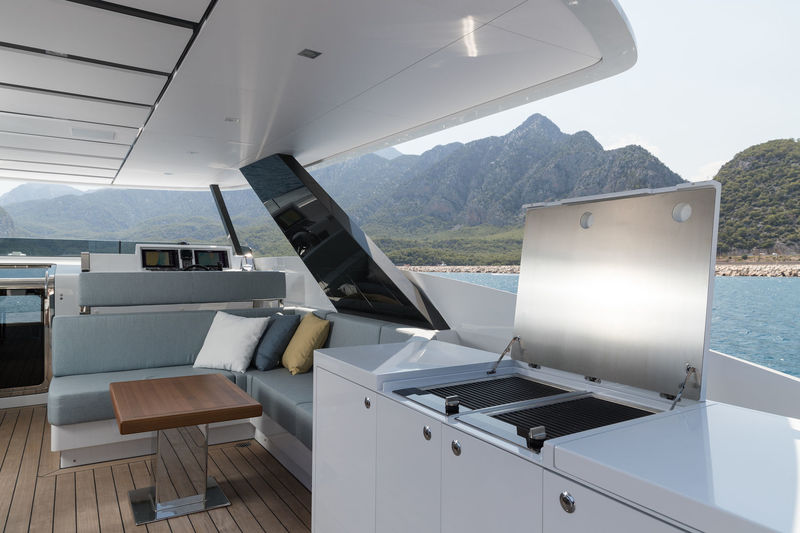 One level down on the main deck, the reasonably sized aft deck accommodates a second outdoor dining area that is built into the transom structure and forms the perfect spot for hosting intimate family dinners when at anchor. 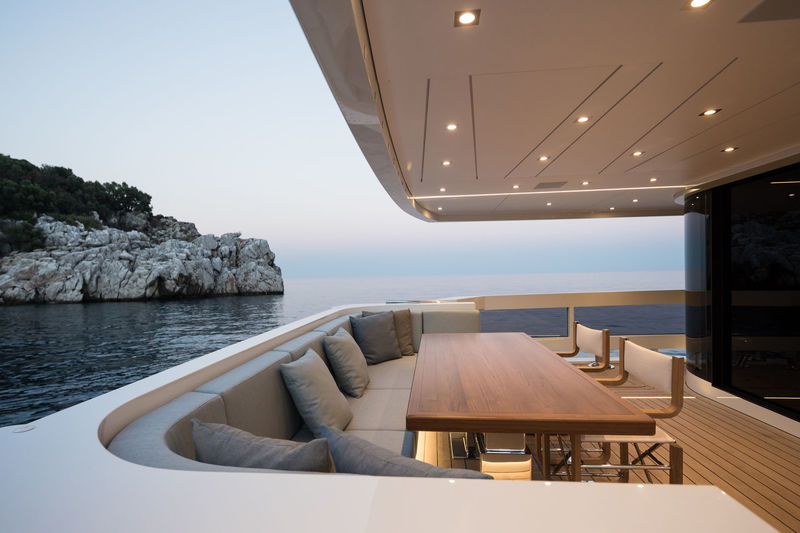 In many ways, the most challenging part of the project laid with the design of its interior, a task which RWD approached in the same way as the bigger projects which they have worked on in the past. “The client’s brief was to create a yacht with larger than anticipated proportions in every space, using all available means to achieve that goal,” explains RWD Project Manager, Adrian Chrisnell. “This meant optimising technical spaces, using efficient joinery detailing and storage, maximizing the layout, and making the best use of light and space to simply give the impression of a bigger yacht.” 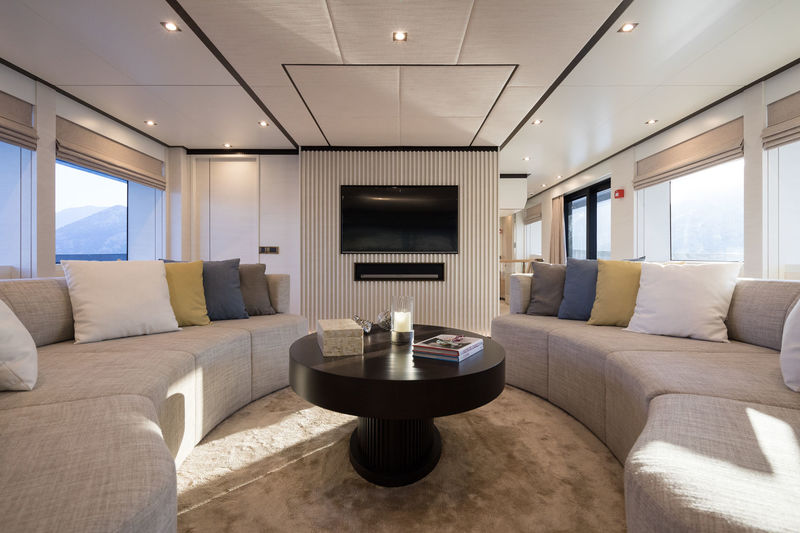 Full-height glass windows were used to wrap around the saloon, giving this space an extra level of airiness that is already so apparent through the use of an intricate LED lighting system and the bright materials used in the decor. Fabrics and surfaces have been carefully selected to complement each other to seamlessly blend into one another, making Virgen del Mar VI a very liveable yacht. “The oak floor gives a more weathered appearance and ties the exterior to the interior, as does the ceiling,” continues Chrisnell. “This is important to allow the eye to be drawn beyond the interior, not constrained by it.” 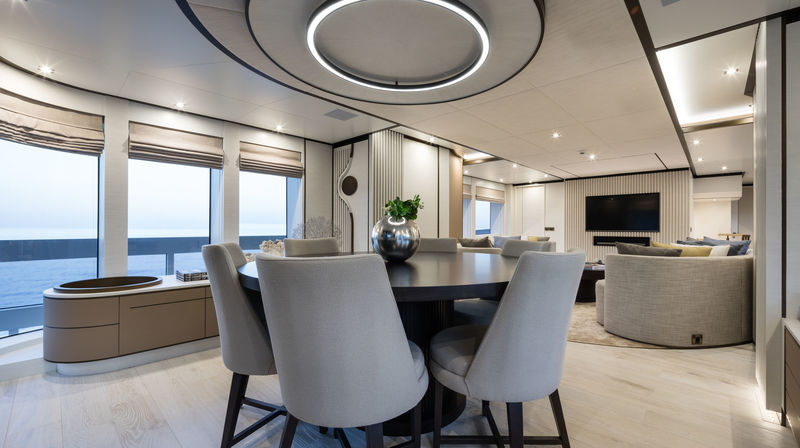 In terms of accommodation, Virgen del Mar VI has a common layout with an on-deck master suite and four guest staterooms (two twin and two double) on the lower deck. As a result of the wrap-around main deck, the master suite has direct access to the outdoors with sliding doors on either side of the cabin, allowing the owners to reach their private deck lounge on the foredeck without any fuss. 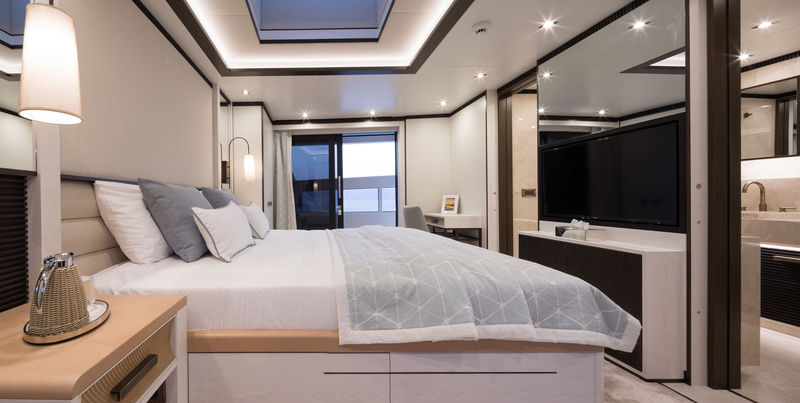 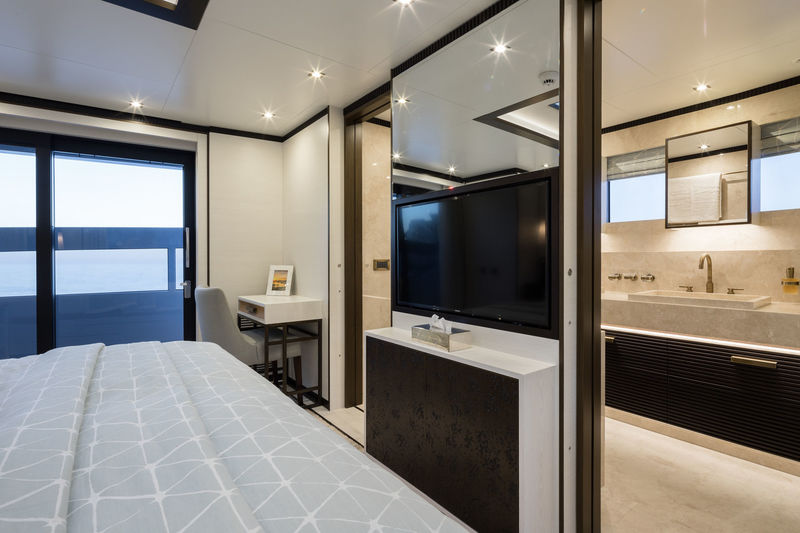 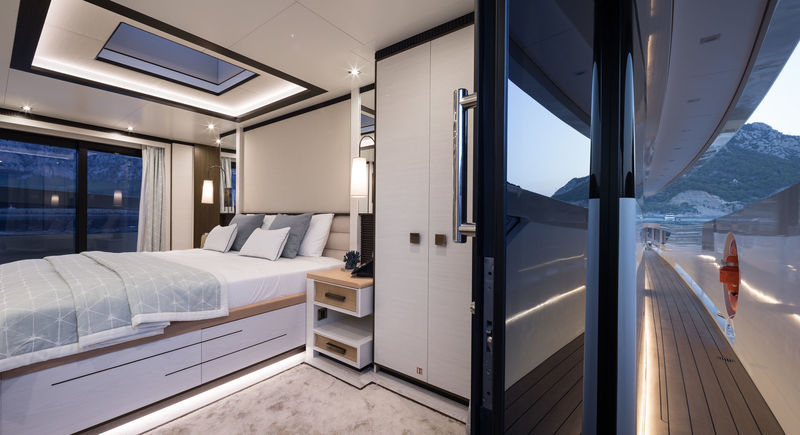 The lower deck accommodations are finished in the same style and have been meticulously laid out with extended stays on board in mind. “The guest spaces themselves were optimised over a long period to ensure each was as well-organised as possible.” 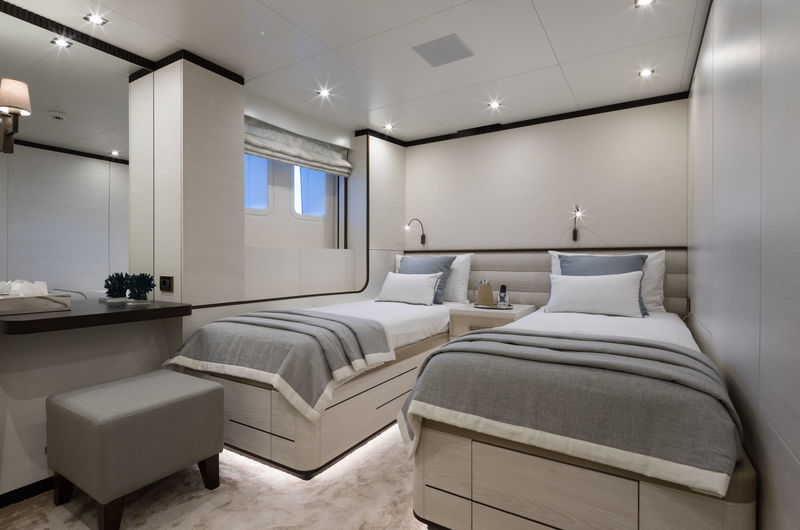