Home > News > Superyacht Pari on the rocks off Cap Ferrat

At around 04:30 saturday morning, strong winds caused Pari to drag anchor off Cap Ferrat, pushing her up against the rocks. Eight people were on the yacht when the incident occured, seven of them were rescued off the yacht by French authorities. 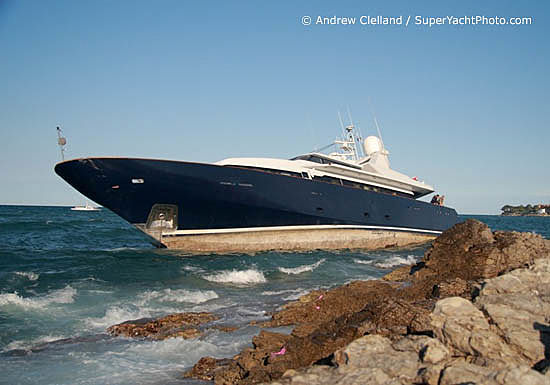 It is believed that the vessel was leaking diesel, but this has not yet been confirmed. An anti-pollution team is currently on stand-by. To assist in the rescue, the French tug Abeille Flandre arrived yesterday afternoon.

The 39m motor yacht Pari was built by Alucraft in Turkey and fitted out by Cantieri Navali Argentario in Italy. The exterior of Pari was designed by Vincenzo Ruggiero. Her previous owner, who now owns a very large yacht, asked Espen Oeino to redesign the yacht. Among the modifications was the addition of a new swimming platform, which increased the length of the yacht with 5m.