The 72.80-meter (238’ 10”) Predator will go down in the annals of yachting history as the first Feadship with an axe-bow. Built by Koninklijke De Vries Scheepsbouw in Aalsmeer (NL), this awesome motoryacht also broke several other records at the time of her launch in 2008. Despite being among the quietest Feadships ever built, Predator has the tallest engine room, the longest uninterrupted interior views, the largest draught and carries an unprecedented four-engine propulsion package. 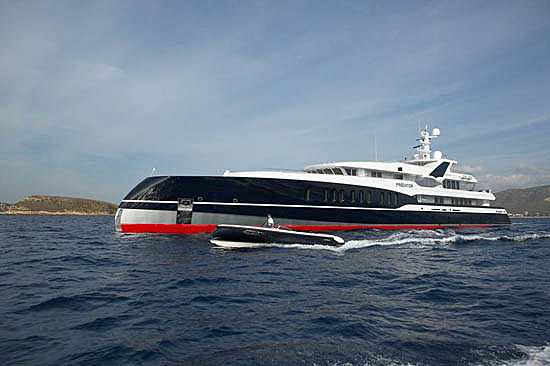 The background to the construction of a Feadship with an axe-bow can be traced to 2003 when a designer from outside the yachting world asked Feadship to investigate the feasibility of designing and building a superyacht based on a semi-submerged concept. Detailed technical research by the De Vries yard and De Voogt Naval Architects established that the best way forward would be to base the hull design on the axe-bow designs from the late 1800s. Although models were analyzed in association with the MARIN research institute, the design package was not taken further at the time. 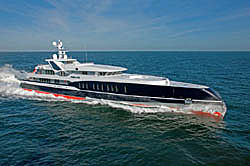 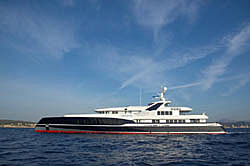 A challenge for Feadship
Fast forward to late 2004 and Feadship is in discussions with the future owner of Predator, who has commissioned a modern and aggressive design for a sleek, fast-looking yacht. His primary requirement is for speeds around the 25-knot mark but he does not want to use jets or gas turbines. This raised a clear challenge for Feadship: Such high speeds on a on a 70-metre-plus yacht will inevitably result in high propeller blade loads if a conventional diesel-propeller propulsion set-up is deployed, creating excessive levels of noise and vibration. 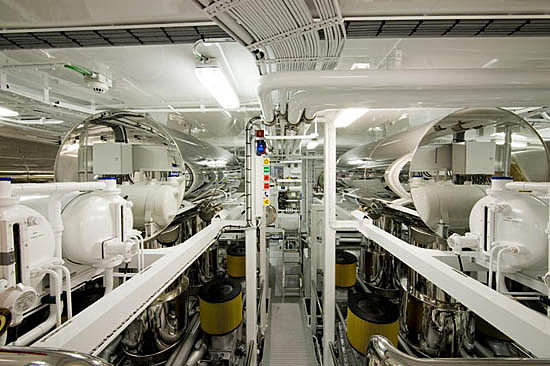 In order to ‘minimize’ the required propulsion power, Feadship’s solution was a hull form with the lowest possible resistance. The owner was given a choice between a flared bulbous bow or an axe-bow. Seeing the hydrodynamic benefits of such an efficient displacement hull design and loving the raked look, he did not hesitate to go for the latter and the Predator project was confirmed.

Duly impressed
Predator’s skipper Greg Drewes, who has been at the helm of four Feadships and several other memorable superyachts during his 30-plus years at sea, is delighted with this performance. “The yacht handles better than any I have ever sailed. We have been in five-meter seas and Predator throws no bow wake. The V of the bow adds sufficient displacement as the bow enters a wave to give a very soft rise through the sea. There is no pounding and in smaller seas up to four meters she is as smooth as a flat sea. The lack of vertical movement makes Predator amazingly comfortable. There is no splash, no rise and no fall.” 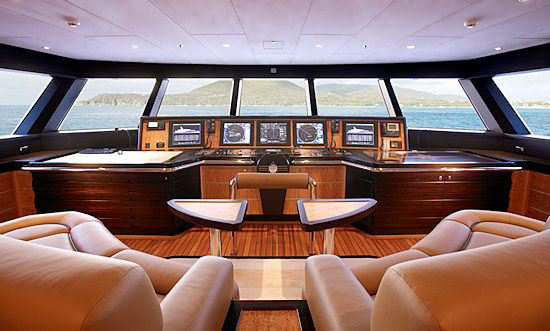 Captain Drewes is impressed with the comfort standards in other ways too: “The specs on noise, vibration, speed and handling also surpassed our highest expectations. We averaged 20 knots with two engines running at 1500 rpm, and at that speed Predator is as smooth as other yachts I have run at seven knots. When we kick in four engines at a top rpm of 1800, she does between 27 and 28.5 knots depending on the amount of fuel onboard and the sea conditions. Nonetheless, the power of the blades is such that Predator can slow to zero in little more than twice her length.”

Interior aesthetics
Lavish and spectacular, the finished interior shows no visual signs of the enormous efforts made to keep the pounds off. Predator’s GA was developed by De Voogt while the styling and decorative brief was given to the Bannenberg design studio in London. Additional touches were made to the owner’s stateroom towards the end of the project by his own decorator, who is responsible for the interior design of the owner’s office buildings and homes. 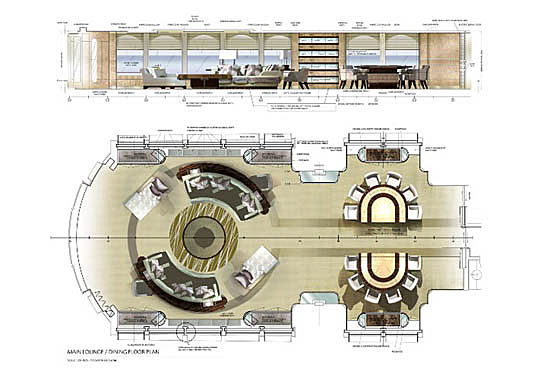 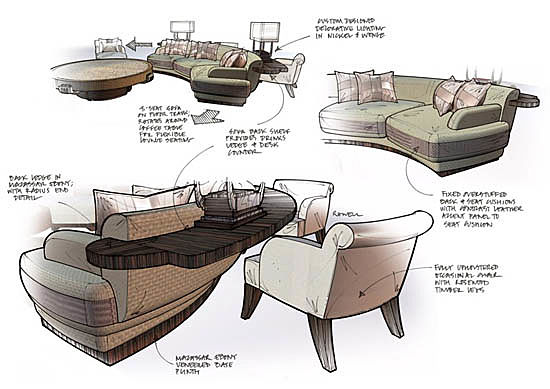 To a great extent the owner was pleased to allow Dickie Bannenberg and Simon Rowell, Creative Director at Bannenberg Designs, to weave their magic over the interior. His only major request was for extensive deployment of Karelian Birch, a fine timber that is found in Northern Europe. 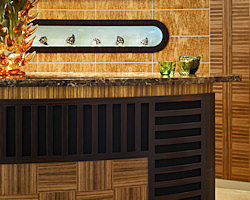 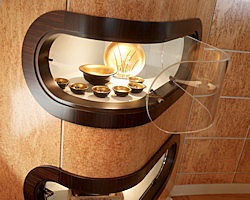 This wood has a very distinctive light color and the designers have therefore brought contrast into the interior by adding two strong accent timbers: High-gloss Macassar ebony and Zebrano. These are used in various forms of rigid, shadow-gap detailing that was exceptionally complex for the joiners to realize.

A tour of Predator
Perhaps the most remarkable fact about Predator’s interior is that it only has sleeping quarters for six people in two VIP guest suites and one giant master stateroom. The entire yacht has an uncluttered feel while offering masses of options should the owner and his friends wish to party.

The main deck
The owner’s stateroom is the largest of its kind yet seen on a Feadship; while Anna had a larger owner’s area, this was a split-level arrangement. Size does matter on Predator and the owner specifically requested that the bulkheads be positioned sufficiently aft to make the stateroom and bathroom a giant single space. 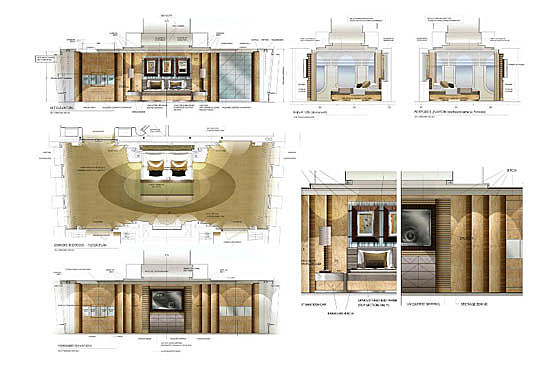 Having six virtually full-length elliptical windows either side of the room magnifies the visual impression upon entering. The benefits of having a central air conditioning system, removing the need for cabinets along the sides of the room, are instantly apparent. 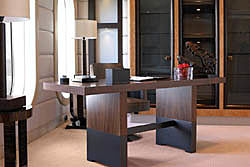 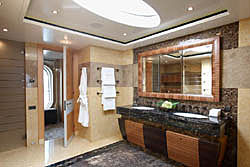 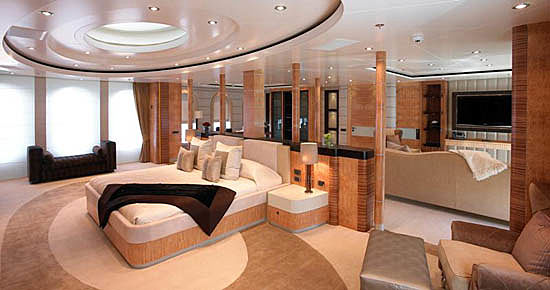 An office/study area is located to starboard with a Promemoria table made of walnut and ebony framed cabinets with smoked glass. Opposite is a lounge with a giant settee and a flatscreen TV. The bed faces forward and a visual separation is created by four structural pillars encased in Karelian Birch. 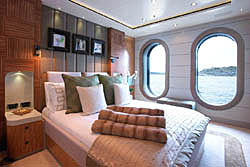 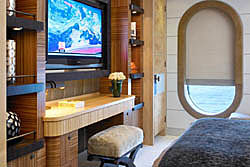 Moving aft, there are two VIP guest staterooms with a similar degree of comfort and sophistication as the owner’s area. The suites are the same in terms of architecture, with slightly different colored accessories: One olive green, the other taupe. Again we see a wealth of luxurious and natural finishes, with real fur thrown in for good measure. There is a tasteful mix of wool and silk around the bottom of the bed, with muted tones keeping the scheme fairly neutral and just a hint of color in the bed linen and embroidery. The back bulkheads are made of leather, with Zebrano pillars either side of the bedstead. The bed linen has been specially designed to match the ellipse, tying in with the shape of the carpet and the windows. 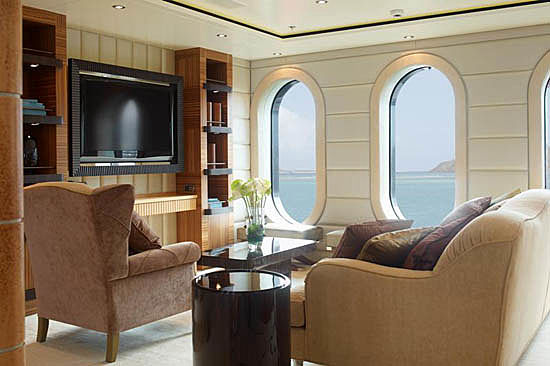 Predator’s owner had a key demand when it came to hallways, which he had found archaic and disorienting on charter boats. A key layout feature in the initial brief was therefore to keep the corridors straight.

On the main deck this request has been addressed in spectacular fashion by developing a centerline design concept in the main lounge with a partly false sliding door. A custom-designed dining table forward in the lounge splits into two, providing instant access directly through the dining area into the lounge itself.

Keep walking through the four-panel sliding doors to the aft of the outside deck, turn round and there is an unrestricted view all the way through the lounge and main entrance, between the guest suites, right up to the front part of the owner’s stateroom. Having an uninterrupted view of around 60 meters through an interior must surely be another record for a yacht of this size. 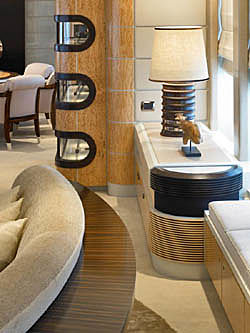 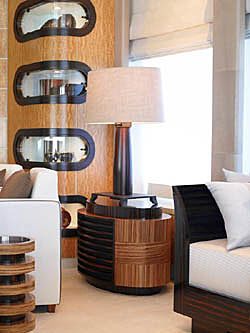 Natural light abounds in the main lounge thanks to the huge square windows. While the bottom of a window is normally in sync with the top of the cap rail, Predator’s owner chose to go lower. This is the maximum height of window one can have while still having a small side cabinet space for wiring, sub woofers and minor AV storage. 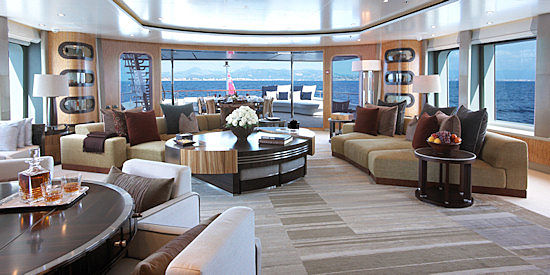 The bridge deck
A low-key comfortable atmosphere is also very apparent in the bridge deck lounge, which has several distinctive areas that add up to a collective whole of relaxed entertainment. There is an attractive seating area aft made up of giant yellow-green loungers, surrounding another elaborate coffee table made from the trinity of nickel, Macassar Ebony and Zebrano. Again, the chunky bronze features on either side are purely for design, but look closely and you will see that the table houses four foot stools. 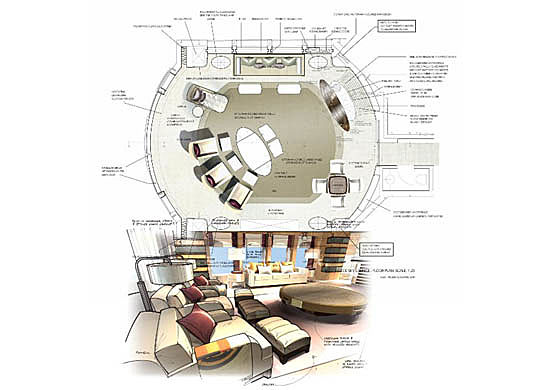 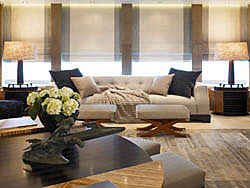 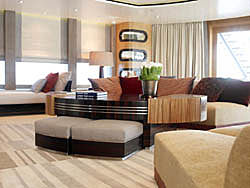 The lower deck
The entire lower deck from amidships forward is dedicated to the crew, with nine crew cabins, a galley and an excellent mess. The galley contains separate cold and hot kitchens and a dedicated cleaning area.

At the end of the elongated corridor (off which are located nine crew cabins), steps lead up to a technical room and the mooring deck. Here two hatches open up to give a good view for the crew when the giant anchor winches swing into action. 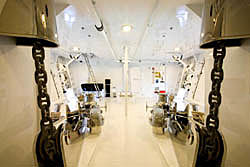 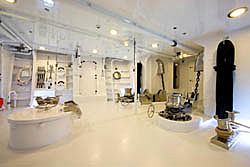 Returning aft we come to Predator’s split-level engine room. Some 14 feet high in places, this is one of the largest engine rooms seen on a Feadship thus far and to a certain degree everything else onboard was built around this temple of technology. On previous ultra-complex Feadships such as Detroit Eagle and Ecstasea, engines ran the propellers with gas turbines running a booster. 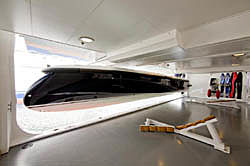 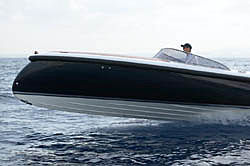 Aft of the engine is a huge garage for Predator’s two tenders, which are launched via the side of the vessel and fit exactly into the space available. Known as Predator A and Predator B, Captain Drewes held a contest at De Voogt to see who could come up with an original tender for his original charge. The winner was Jaap van Keulen, who replicated the inverted bow look of the mother ship. Teak decks offer an old-style look, the blue hulls hint at speed and the ‘limo’ tender (Predator B) is made even more distinguished by the use of mahogany on the bow.

Outdoor facilities
Predator offers a sensational variety of outdoor entertainment options elsewhere on the boat too. The large main aft deck is designed to be a foyer/lobby area where guests can relax and have a drink from the bar after coming aboard from the swim platform. 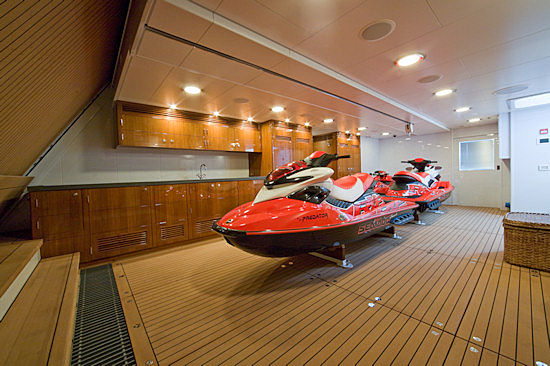 The bridge deck aft is one of the social hotspots of the boat. Glass panels are stored in a locker and slide out to create a windbreak. Slots in the ceiling supply cold air, which won’t be required when lounging on the giant sun bathing pads aft. The organic shape of these beds had already been determined but their huge size was decided during a meeting at Feadship when the owner sketched his preferred option and quadrupled the sun bed size in the process. The size also makes it impractical to have a table next to the pads to put drinks on so these have been built in to the structure itself. 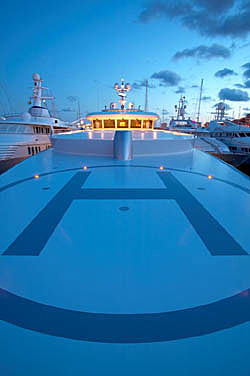 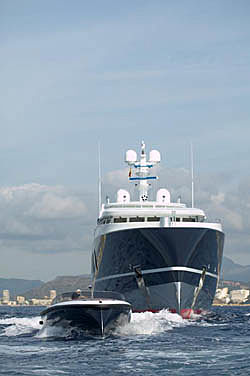 The same story applies to the sunbathing pads on the sundeck above. Here there is a wet bar under the shade of the mast structure, and an extra windbreak can also be created by sliding glass doors. Forward is a large Jacuzzi and double barbecue. 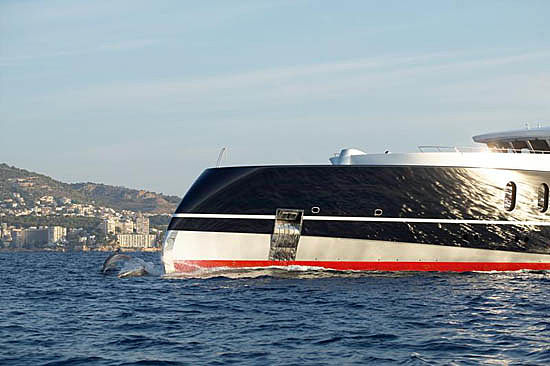 There is one other source of alfresco entertainment available, but this is of a more daunting variety. Out on the nose of the bow is a small hole in the deck into which a twin seat can be screwed into place, complete with seat belts. Those who dare sit here while Predator is underway enjoy the ride of a lifetime. It is a fitting tribute to the adventurous nature of this whole project and Predator’s infinite ability to thrill.