The 142' Troy-built explorer yacht The Big Blue was one of the last vessels hauled on the yard's marine elevator back on June 4th, 2012. She was purchased by her owners in preparation for a circumnavigation and Derecktor was contracted to complete many of the system changes necessary for such an ambitious undertaking. Since that time the crew, the shipyard and a dedicated group of sub-contractors have been hard at work, realizing the owner's vision. 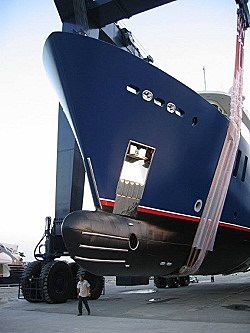 In addition to the completion of works un-finished by the builder and many upgrades to the interior and existing systems, the yard has added a helicopter landing pad and the vessel's hull has been re-painted with a beautiful satin-finish blue.

This project has shown the value of close collaboration between the owner's design team, crew, shipyard and sub-contractors to achieve an outcome that is in the best interests of the vessel and the owner.

When work is completed The Big Blue will be a purposeful and attractive vessel, perfect for the use for which she is intended while still representing a good investment.